Gold’s next stop should be $2,680, but look at these other surprises.

Snapshot Of Where Markets Are Headed
March 2 (King World News) – From KWN reader Kevin W:  RSI, MACD, STO’s all beautiful. Next stop for gold is $2,680. 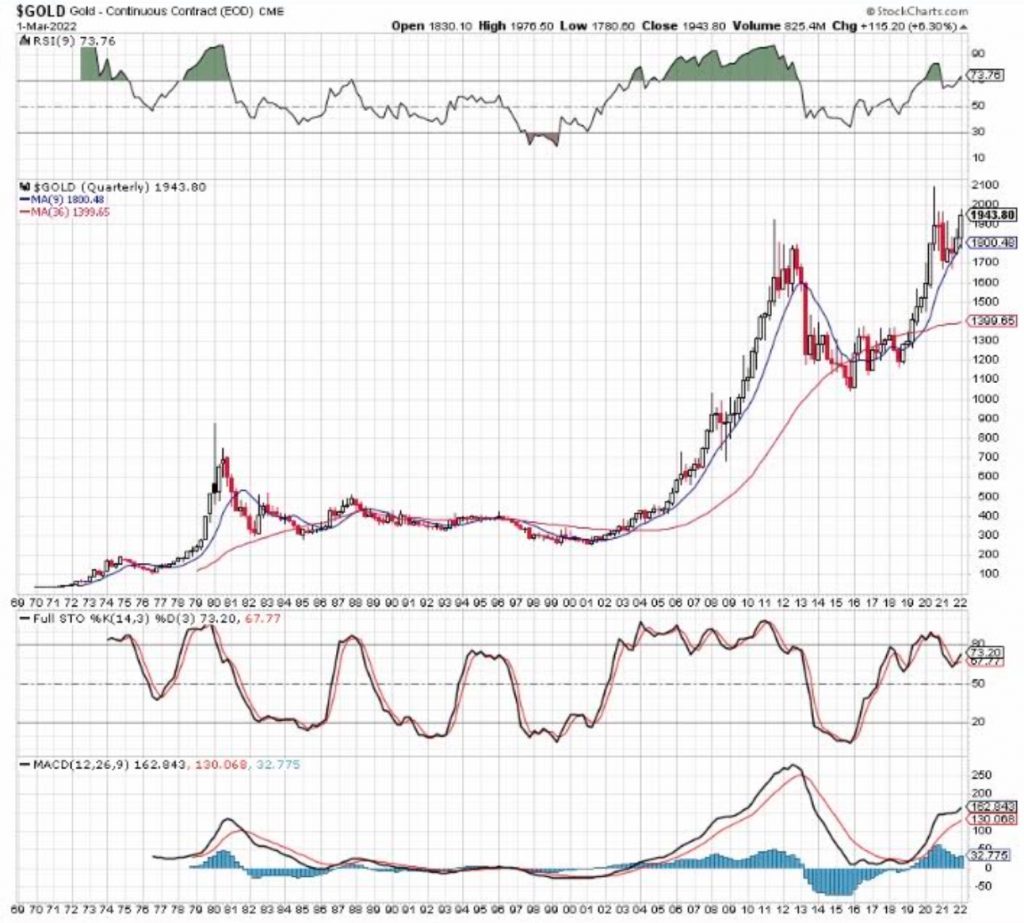 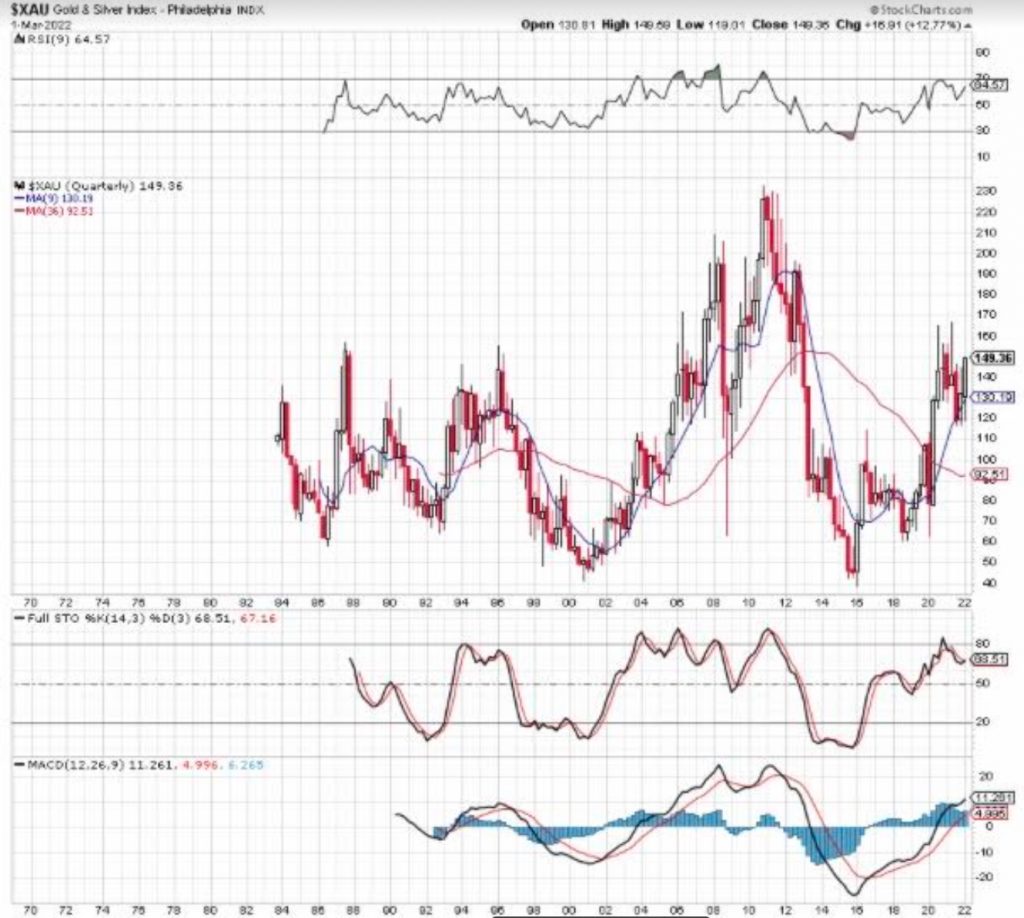 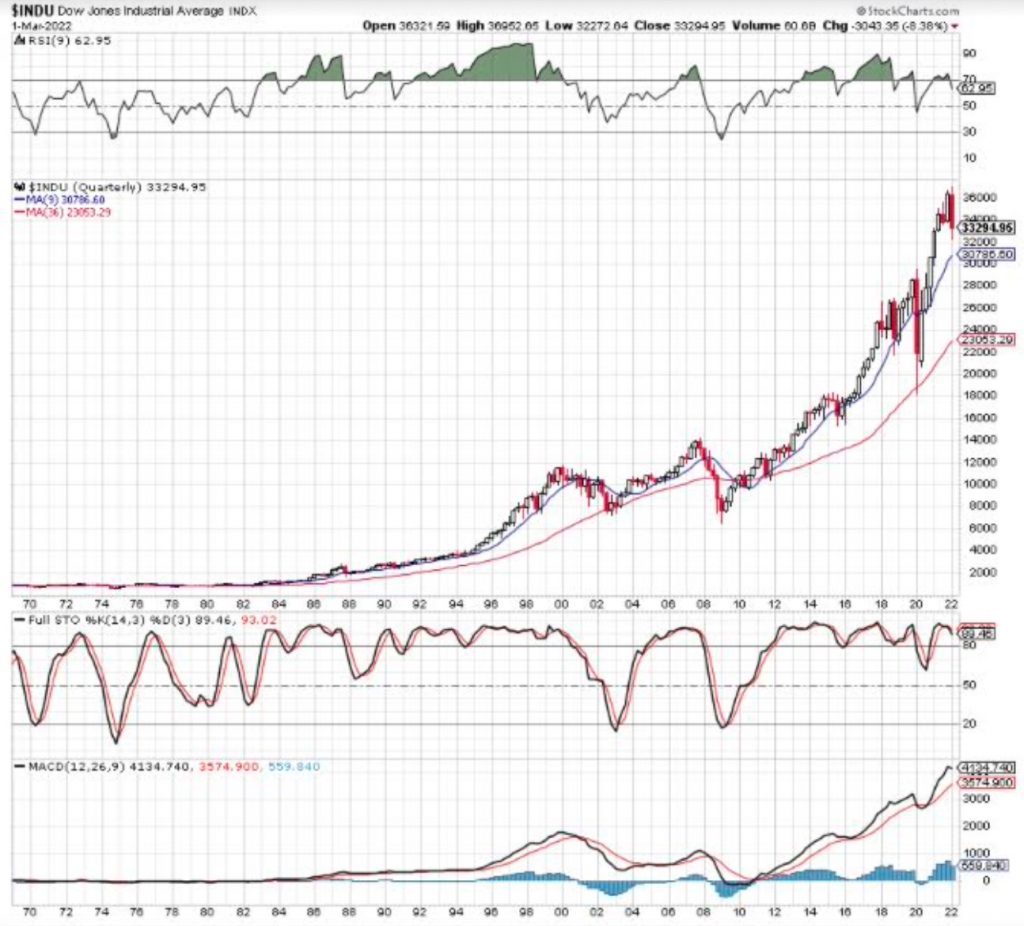 Dow/Gold Ratio Will Fall To 10:1 As
Gold Outperforms Stocks 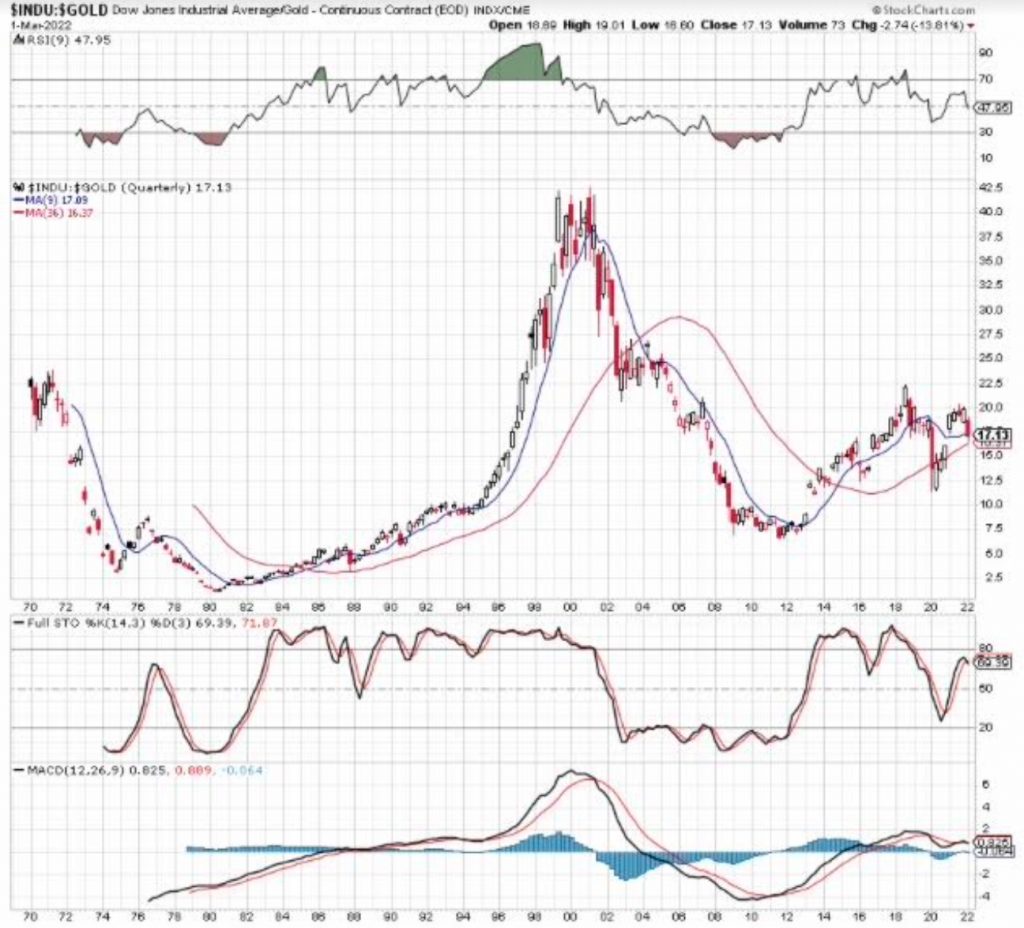 Never Know What We Will Wake Up To
Peter Boockvar:  As we don’t know what news we’re going to wake up to in Ukraine, the market tone now can be summed up by watching the prices of oil, wheat and European natural gas. This morning brent crude is up another 5% to over $110.

European natural gas TTF price is spiking by 26% after a 28% jump yesterday.

This said, no one wants to buy Russia energy or ag anymore and are trying to find alternatives so while there are no sanctions on Russian energy and ag, the private sector has essentially slapped it on Russia themselves.

Separately, as we see whether Russia will default on its sovereign obligations, both dollar denominated and ruble based, because they have lost access to most of their FX reserves, the FT yesterday reported:

“Foreign investors held $20b of Russia’s dollar debt and ruble denominated sovereign bonds worth $41b at the end of 2021, according to data from the Russian central bank. Holdings of Russian equities amounted to $86b, Moscow Exchange data show.”

The Powell Dilemma
So what will Jay Powell say today in front of the House Financial Services Committee? Will he stick to his newly found commitment to deal with inflation or is he going to get cold feet because of the Russian invasion? What’s amazing about the 25 bps or 50 bps rate hike debate in a few weeks, all we’re talking about is whether the fed funds rate will go to .375% (middle of the range) or to .625% in one shot. This is splitting hairs when inflation is at 7.5% but it’s amazing the level of debate it has brought. I think what Powell will do today is to commit to the end of QE and a 25 bps hike at the March meeting. He’ll say they will hike again in May and further discuss the beginning of QT and play it by ear from there. He doesn’t need to commit to anything else right now. He’ll throw out the ‘data dependent’ line and ‘we’re monitoring the Ukranian situation closely’ all at the same time trying to talk tough about reigning in inflation because right now, he is the next Arthur Burns…

BoE
Two Bank of England members are not letting the Ukranian war impact their rate hiking decision and if anything, the growing inflation pressures want them to act quicker. Michael Saunders today said “Prompt tightening now could help limit the total scale of tightening that will be needed…My preference is to move quite quickly towards a more neutral stance in order to prevent the recent trend of higher inflation expectations and rising pay growth from becoming more firmly embedded.” Catherine Mann late yesterday said “When we think about the policy strategy it is very much a front load to offset or counter inflationary expectations.”  After falling by 39 bps over the past 2 days, the 2 yr gilt yield is rebounding by 16 bps on the comments. The pound though is little changed but bank stocks are bouncing after the weakness seen over the past 2 days. Barclays is up 1.8%, Lloyds by .5%. Yields are also higher in the rest of Europe after the sharp drop this week.

Supply Chain And Logistics
The February Logistics Managers’ Index (LMI) was released yesterday and it points to why economic growth will slow further in coming quarters but maybe on the other hand, last longer than it would relative to pre covid trends. Remember it was a 500 bps contribution to the 7% Q4 GDP from inventories. LMI said the February index was 75.2, “the 2nd highest in the history of the index, up 3.3 pts from January’s reading of 71.9. This is now 13 consecutive months over 70, which we would classify as significant expansion, with no obvious signs of a slowdown on the horizon. Like January, this month’s growth is driven by rapid growth in inventory levels, which are up 9.1 pts to 80.2, crossing the 80 threshold for the 1st time and shattering the previous record of 72.6.

Inventories Have Ballooned To Record Levels 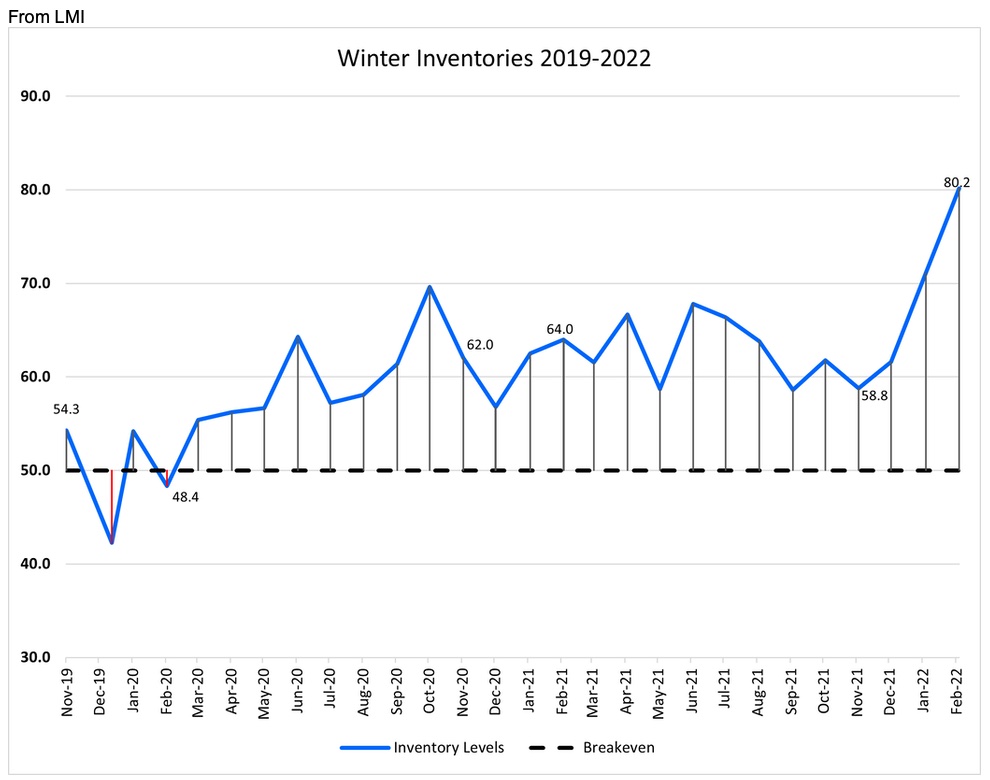 This is a complete 180 from the Fall of 202, when firms struggled to build up inventories. Now it seems that a combination of over ordering to avoid shortages, late arriving goods due to supply chain congestion, and a softening of consumer spending has created a logjam, Inventory Levels are a full 21.4 pts higher than they were in November…There is a possibility that this surge in inventories will result in some price markdowns for durable goods. However, it seems unlikely that this will lead to a meaningful break in the inflation we have observed across supply chains, as Warehousing and Transportation Prices remain high due to the continued mismatch in demand and available capacity.” The underline is mine.

I’ve said for a while that Just in Time inventory management is dead and is another reason why goods inflation is not going back to pre covid trends for a while. To this, LMI said in today’s release “Beyond the drop in sales and shipping delays, it is possible that recent supply chain challenges may have taught manufacturers, suppliers, retailers and customers that holding inventory provides an important element of resilience and are not as lean as they once were.” This also means that the inventory rebuild can last longer than it would otherwise.

MARKETS PANIC ON EMERGENCY FED RATE CUT: Got Gold? The Road To Zero, Check This Out, Intervention Most Egregious In 40 Years