Big Money Will Be Buying Gold & Silver Space, Plus Look At These Big Surprises

Big money will be buying the gold and silver space very soon, plus look at these big surprises.

Things Will Be Changing
May 26 (King World News) – Graddhy out of Sweden:  This 14 year blue falling wedge tells us that things will be changing and big capital will find its way into precious metals. 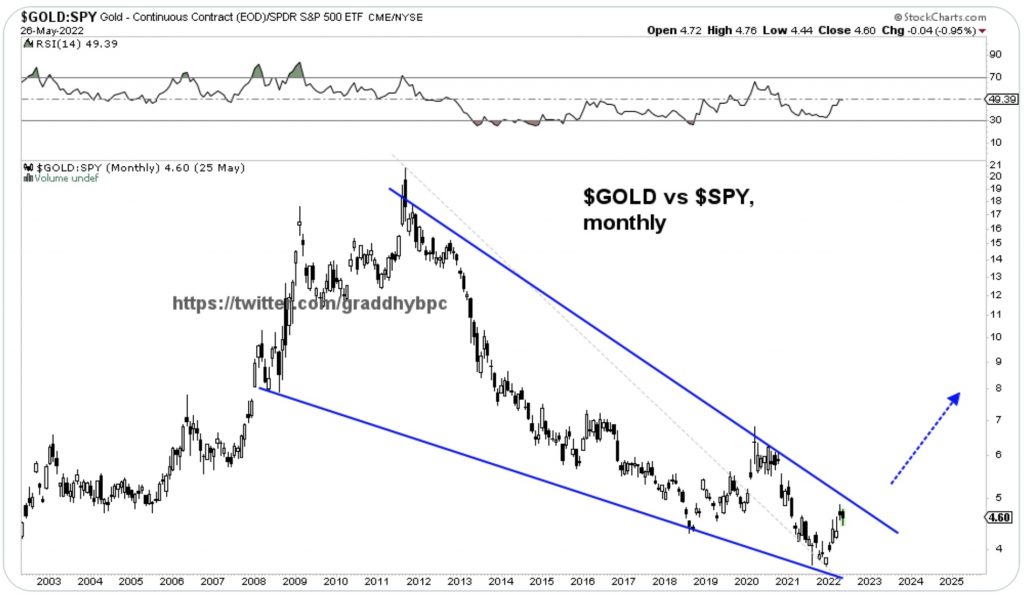 The Tide Is About To Turn
Graddhy out of Sweden:  Tech is the holy grail for many, when they realize what is happening, the capital inflow into commodities companies will be massive. Very possible general equities top forming here and is at critical support right now. Equities could tag all-time highs once more though. 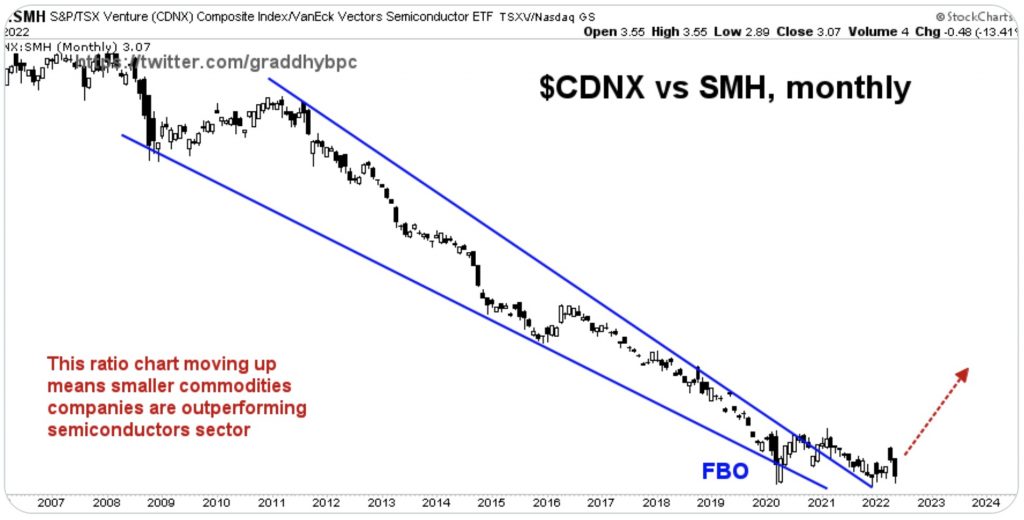 Look At What Is Happening With Auto Sales
Peter Boockvar:  Just as we’re seeing the slowdown in the housing market with regards to the rate of transactions because combining the high cost of the ‘product’ with a rising cost of funding it makes it much less affordable, the same thing is now seeping into the car market. That car market that also has high prices and is very interest rate sensitive. TrueCar yesterday came out with its May preview of auto sales and said:

“This month we’re continuing to see a struggle for supply among the industry however we’re also now starting to see signs of demand adjusting. Higher interest rates combined with higher fuel prices present a headwind to demand cooling off, which may explain why average used list prices are decreasing, down 1.6% in May versus April 2022.

In terms of price adjustments, compared to the beginning of the month we are seeing more vehicles being marked down than for the same period last year. This is truer for used where we are seeing over half of our used listings getting a downward price adjustment since the beginning of the month. This trend is led by the used full-size vehicle segment.”

As for the price of that car:

“Average transaction prices is projected to be up 14% from a year ago and comparable to April 2022.” 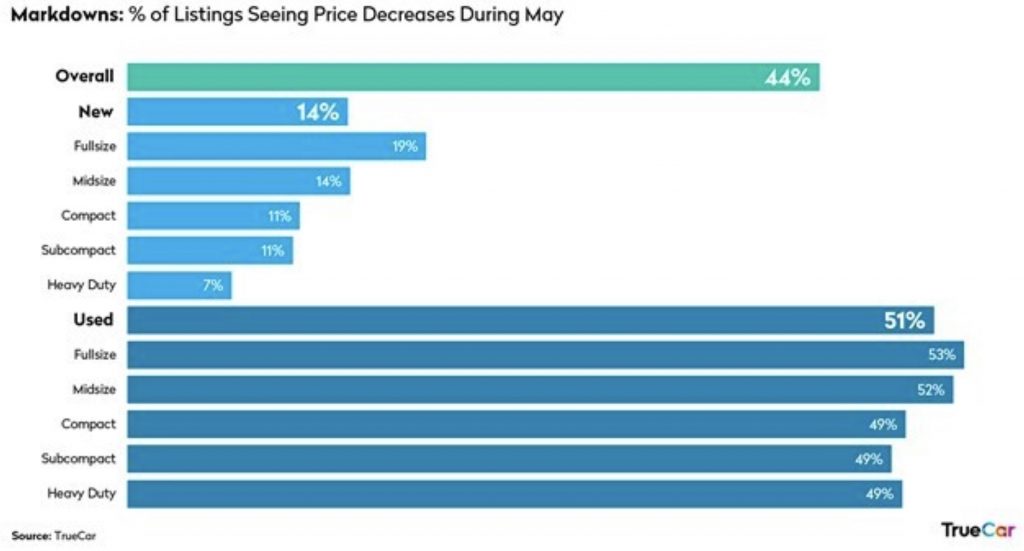 Inflation
Goods prices ex food and energy for some items has peaked but offset by a continued increase in service prices which will result in a still very elevated CPI picture by year end. Those who have been calling for a quick return to a 1-2% inflation trend are going to have to wait even with growing odds of a recession.

Retail Sales
So the retail themes we’ve seen over the past week after hearing earnings reports from a variety of companies, spending is better on apparel used for occasions and back to work and for higher end stuff and things for the home but softening for other wants that people loaded up on over the past few years. Macy’s in their earnings press release today said:

“We saw a notable shift back to occasion-based apparel and in-store shopping, as well as continued strength in sales of luxury goods.”

Dollar General which mostly focuses on needs and cheaply too reported better than expected Q1 numbers this morning despite “ongoing headwinds due to supply chain pressures and heightened inflation.”

Meanwhile In Europe…
After two months of declines after the Ukranian invasion, Italian business confidence in May rebounded by 2.5 pts and gets back almost all of the confidence that was lost in March and April. At 110.9, it compares with 111 in February and 115.6 in December 2021. It was led by a pick up in services and retailers’ confidence while manufacturing and construction moderated. Helping is likely the fall in natural gas prices which as of today, the Dutch TTF price of 85.35 is now below the 87.5 price it stood on February 23rd, the day before the invasion. That said, it is still about 8x where it stood pre covid. To compare this price with the US equivalent, divide it by 3 (give or take), so $28.5 in Europe would compare to today’s US front month futures price of $8.98 per mmBTU. 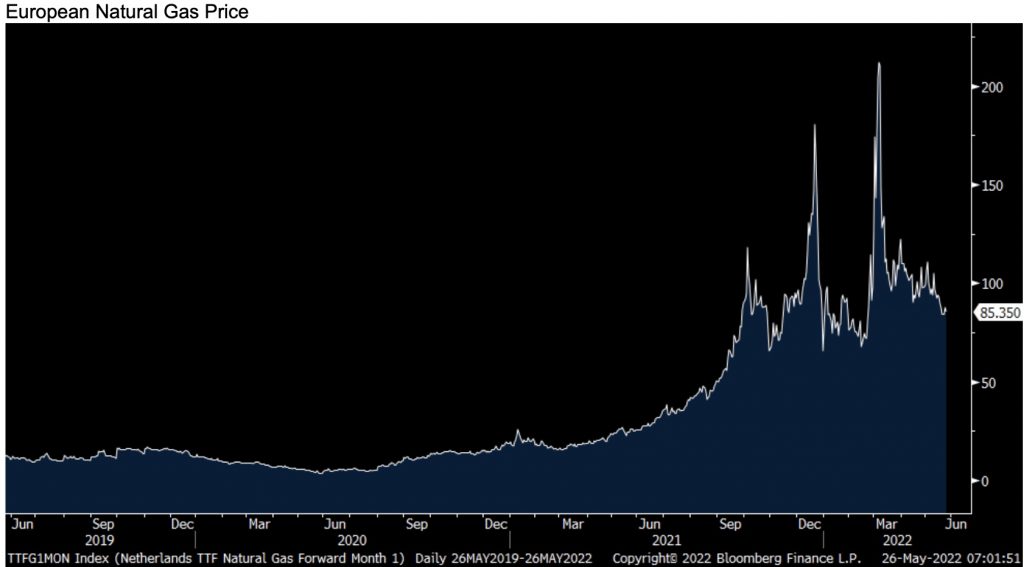 Stock Market Sentiment
The market mood, not surprisingly, is still pretty dour. Yesterday II said Bulls were at 28.2 from 27.8 while Bears fell to 40.8 from last week’s 43 print which was the highest in 11 years. Those expecting a Correction rose almost 2 pts. Today, AAII said Bears were up by 3.1 pts to 53.5 which is a 4 week high and is 6 pts from the highest since March 2009. Bulls fell by 6.2 pts to 19.8 and that is a 4 week low. It got as low as 15.8 in April. The CNN Fear/Greed index yesterday closed at 14 vs 9 one week ago. Bottom line, with sentiment in the dumps (although has been for a while), there is always the potential for a bear market violent rally and I still wouldn’t be surprised if we made an attempt towards the 4100-4200 level, but which would be major resistance if so before the next bout of challenges as QT starts. THE bottom is still in the future.