As the price of gold and silver broke out this week, bullion bank gold short positions were already at a staggering $39 billion.

November 6 (King World News) – Alasdair Macleod:  Eric, developments in gold and silver markets following Election Day in the US indicate that a systemic crisis for the Comex gold contract is unfolding. We will know more tonight when the Commitment of Traders numbers are released later today, and I will send you an update when they are available.

The chart below of the monetary value of the bullion banks’ shorts shows the problem. Clearly, their collective short position is not only at record levels but is beyond control. 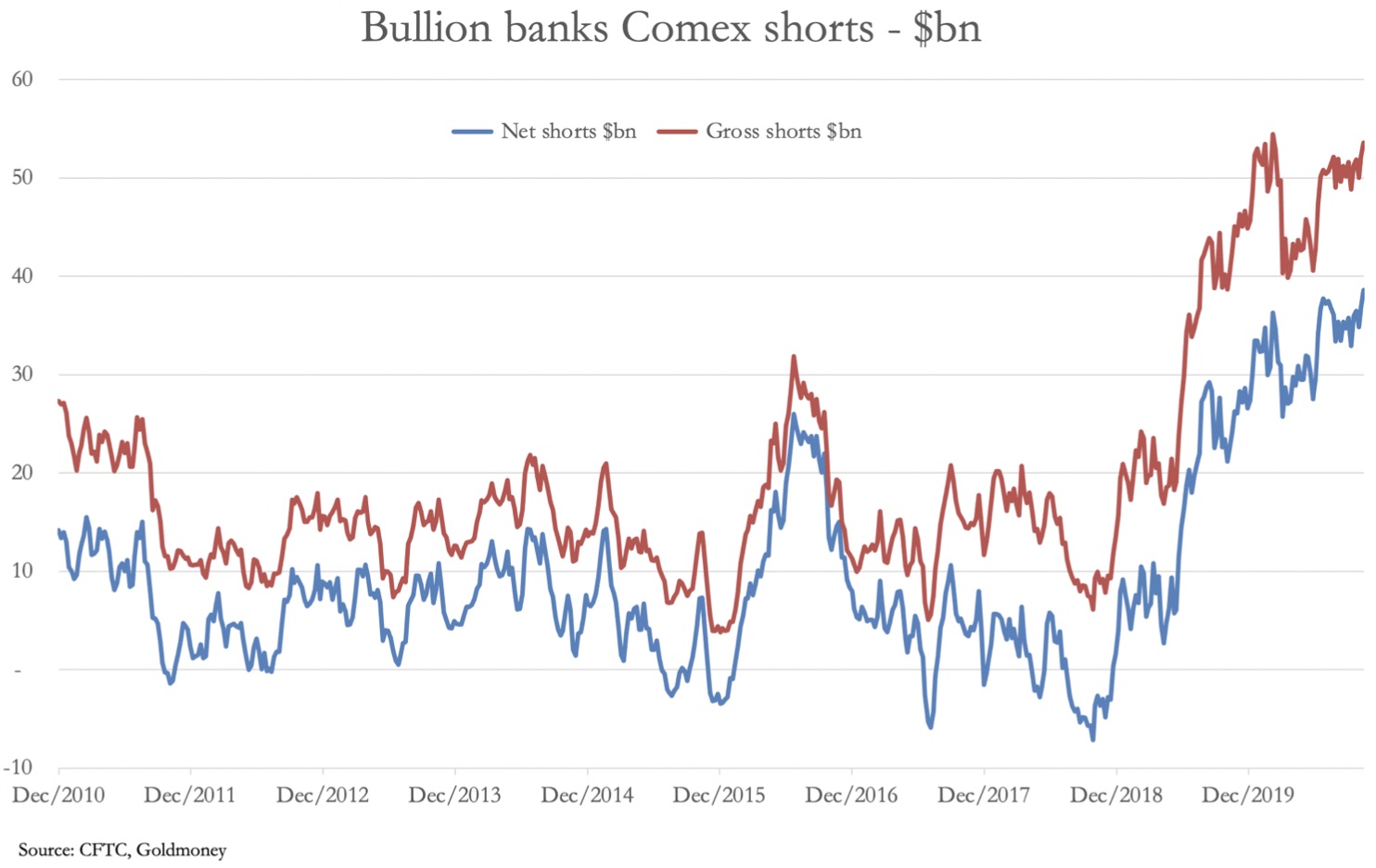 This was the position at the last COT figures (27 October), and they show that bullion banks net of their longs are short to the tune of $39 billion, and $54 billion gross. The gross short position is spread among 29 trading desks, averaging $1.86bn. And as with any average, some banks will have considerably worse exposure than that average number…

Now that gold appears to have broken out of its three-month consolidation on the upside, the position for the bullion banks is sure to worsen considerably. After a mini-rally, the dollar’s TWI is looking sick — again. The chart below shows how it might appear to hedge fund managers. 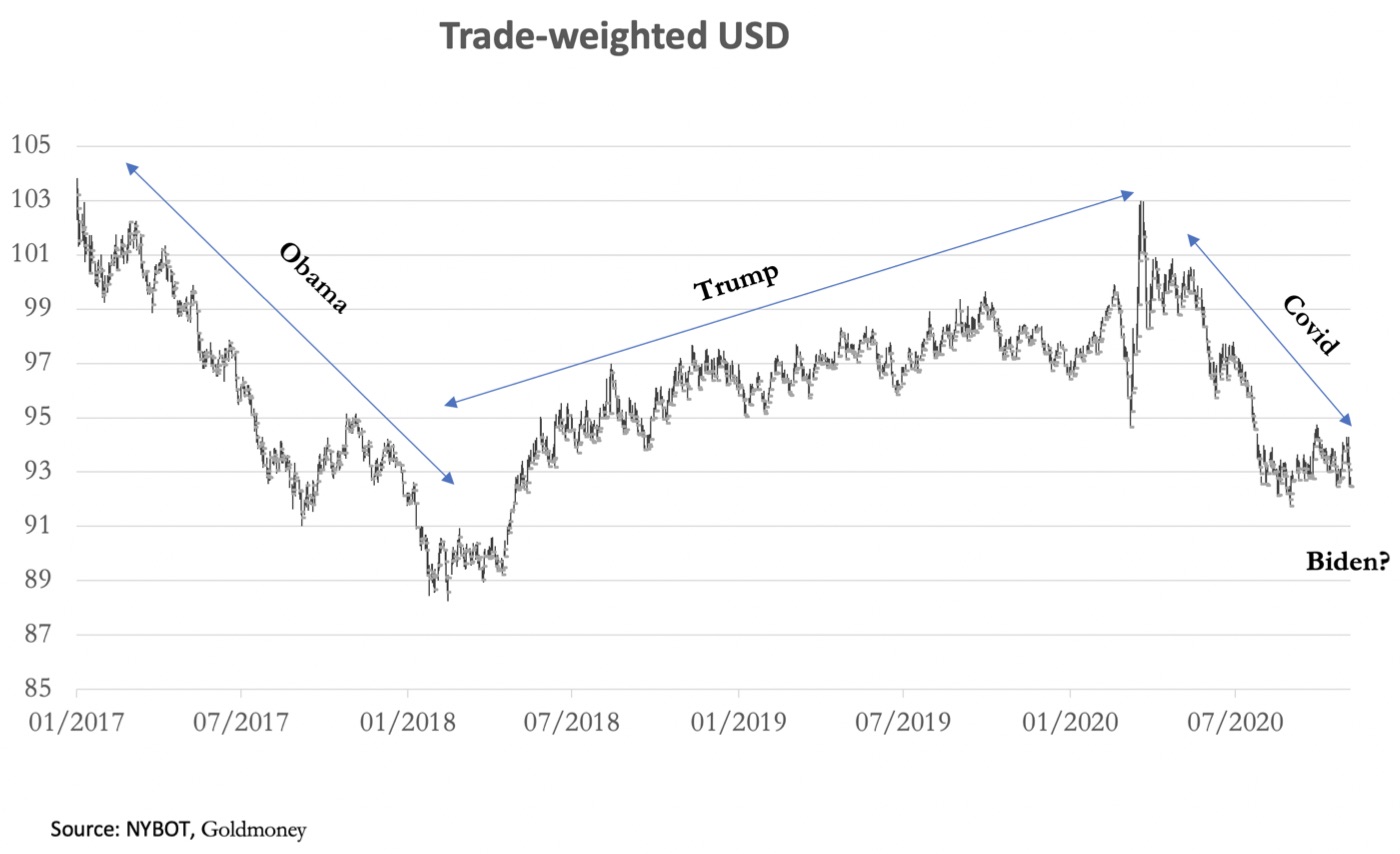 If Trump was re-elected, it could have been argued that the dollar’s TWI would recover further, given the battering it had from Covid and the opinion polls which gave Joe Biden a clear lead. The reality negates that bounce, which is why we see the TWI falling to 92.31 currently, threatening to break into new low ground.

The reason this matters in the short term is many hedge funds and algo traders who habitually trade the gold-dollar pair are wrong-footed, being long dollar—short gold. I would expect these traders to sell dollars and buy Comex gold contracts in the coming days.

This is why the bullion banks are getting into ever deeper trouble. If gold runs higher and their short exposure increases, we will almost certainly start talking about systemic issues in this Comex contract, particularly if traders stand for delivery in numbers for the expiry of the December contract at the end of this month.

I Remain Very Positive On Gold & Silver
Peter Boockvar:  The US dollar is approaching a very key level with its weakness this week. The euro heavy dollar index is down for the 4th day to just above the weakest point since April 2018. Yes, it’s good for US exporters and a release valve for emerging markets but it imports inflation and reduces the purchasing power of the US consumer which is the main driver of the US economy. Also, with the US the largest debtor nation in the world, foreigners can always take their capital elsewhere if a weaker US dollar eats away at their returns. Gold and silver in turn are rallying to the best levels since mid September and I remain very positive.

Jon Case Just Issued This Dire Warning About The US!

To listen to this is incredibly powerful audio interview where Jon Case issues a dire warning about the US and discusses the fragility of the global financial system as well as massive bull markets in gold and silver CLICK HERE OR ON THE IMAGE BELOW.