Legend Art Cashin lays out the situation now that stocks wiped out yesterday’s gains and the bulls are having trouble regrouping. Plus will China intervene next?

Stocks Wipeout Yesterday’s Gains
September 29 (King World News) – Art Cashin, Head of Floor Operations at UBS:  Stocks virtually wipeout all of yesterday’s gains, selling is broad and the breadth is heavily negative. The concern is that the Central Bank put what we saw out of the Bank of England was more halfhearted than some had hoped for and there may not be a follow-up there. If we continue to take out the lows for the week, it will raise questions as to whether we get an actual additional leg-down, and that will be more of a problem than what we hoped. We are surprised since the market continues to be heavily oversold and they are due for real bad market bounce. But, a one day effort doesn’t look good enough. Also problematic is the downgrade of Apple, the rock on which much of the rally had depended and continuing weakness in Tesla. Neither of which is very helpful to the Bulls.

Let’s take a quick look at some of the early technical numbers.

Previous low in the S&P was 3,623 and this morning we got down to 3,619 and the previous low in Nasdaq was 10,776 and this morning we reached 10,571, the Dow is yet to take out it’s low for the week. But, the action thus far is not good. If they roll over and sell off again this afternoon, taking out these new intraday lows, would be a critical sign as we head toward the weekend. So far the attempts to bounce are weak. The yields also remain important and they are having a mild attempt at a bounce as the yields to slip back down below 3.80, the high today was 3.86 and that was enough to put extra pressure around things.

The Bulls are attempting to circle the wagons, but the performance has not been heartening. So, keep your eyes on yields and the previous intraday lows and please stay safe.

The Big Problem With Intervention
Peter Boockvar:  A big problem with intervention, whether in FX or in the bond market, is you can’t half ass it or the markets will fight right back. While many want to blame the Truss UK budget for the craziness in the UK bond market, the Bank of England is very much to blame too. Both because of their modest interest rate hikes to date in the face of raging inflation at the same time they were on the cusp of outright selling gilts in their attempt at QT rather than just led them mature on their own. So, by now intervening and BUYING gilts, they’ve put themselves in an even more precarious situation because the markets know temporary QE is just that, temporary. And they tell us yesterday that next month they’ll start selling gilts?

Bonds are giving back some of what they gained yesterday and the same can be said for just about everything, FX, stocks, and commodities (ex oil because of possible further OPEC production cuts).

PBOC May Intervene Next
The PBOC might be the next central bank to intervene, this time in their FX market and you can see the intraday chart in the onshore yuan. Reuters reported this morning, “China’s central bank has asked major state owned banks to be prepared to sell dollars for the local unit in offshore markets as it steps up efforts to stem the yuan’s descent, four sources with knowledge of the matter said.” 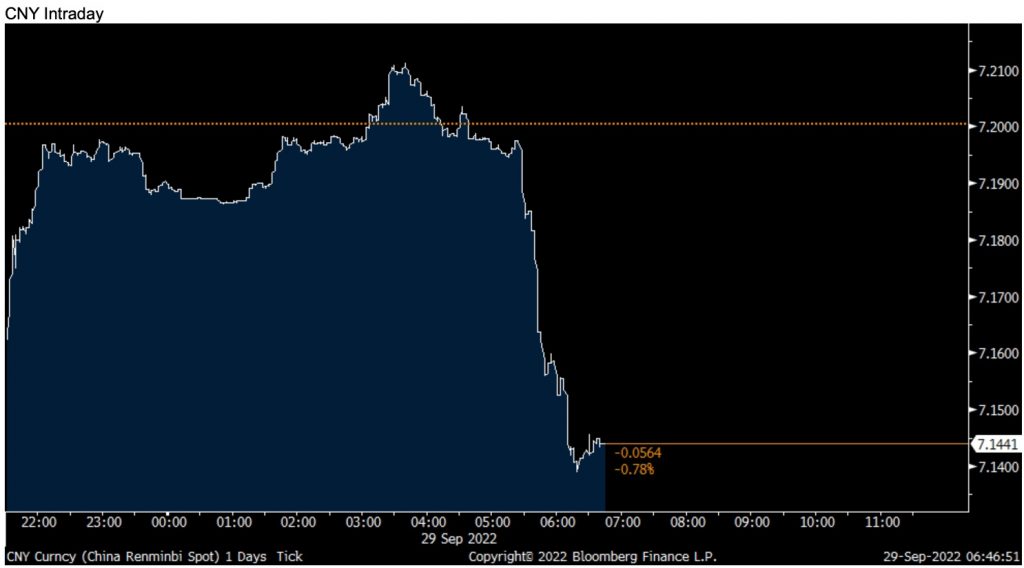 Major Stock Market Crash Alert, Plus Gold & Silver Update
To listen to Michael Oliver discuss what to expect for gold, silver, the US dollar, mining stocks, the Dow, S&P, NASDAQ and more CLICK HERE OR ON THE IMAGE BELOW.

Russia And China Making Moves
To listen to Alasdair Macleod discuss Russia and China declaring the truth about their massive gold reserves as well as what to expect next after a wild week of trading CLICK HERE OR ON THE IMAGE BELOW.

One Of The Greats Just Put Out A Note On Gold