Today legend Art Cashin warned that the US and China may go to war. The other worry is a disastrous global crash that is underway.

SHADES OF 1962: Two Most Powerful Nations On The Verge Of War
September 1 (King World News) – Art Cashin, Head of Floor Operations at UBS:  Before we note the foreign markets, let’s note that the new money for the new month seems to be having little to any effect. U.S. futures look lower because the yields have moved higher again – up above that 3.11% level. They seem to be putting pressure on the stock market, particularly the high cap techs. There is supposed resistance at 3.25% and certainly then again as you near 3.4% to 3.5%, but let’s not get ahead of ourselves.

Meanwhile, overnight foreign markets are shaky to say the least. Asian markets are getting banged around. Some of it in catch-up to the U.S., but a lot of it has to do with the new Covid crackdown in China. A city of over 21 million people may be shutdown solidly and that city contains more than a few factories that produces goods for the Western world.

In Europe, markets are also weaker as people are trying to figure out what the rates/yield picture is over there as inflation continues to break out and the energy crisis does nothing but worsen. The look of the markets is not a ready first day bounce and may put Jonathan’s call for an analogues interim bottom at the beginning of the week in trouble and, not to get ahead of ourselves, let’s not forget a three-day weekend coming up and a Friday before a three-day weekend has a bias to the upside so none of those things appear to be working at this time.

The U.S. economic calendar is not particularly heavy. We will get, as usual, the jobless claims in the morning along with productivity and unit labor costs, the PMI manufacturing, and the ISM manufacturing. A bit later in the morning construction spending and natural gas inventories. We have a couple of Fed speakers, but it looks like Powell has finally gotten everybody on board so, I am not expecting any surprises or deviations for the “higher for longer”. A message they have been sending out.

Again, with geopolitics lurking right beyond the footlights, you have got to stay close to the newsticker, remain nimble, alert and above all try to stay safe. Ultimately, the geopolitical analogies to 1962 remains almost evident. The two most powerful nations on the face of the earth on the verge of going nose to nose over activity on a large island just off the shore of one of the key nations. You cannot make this stuff up.

US Dollar Remains On A Tear
King World News note:  The US Dollar Index remains on a tear trading at another new high, assaulting the 110 level. 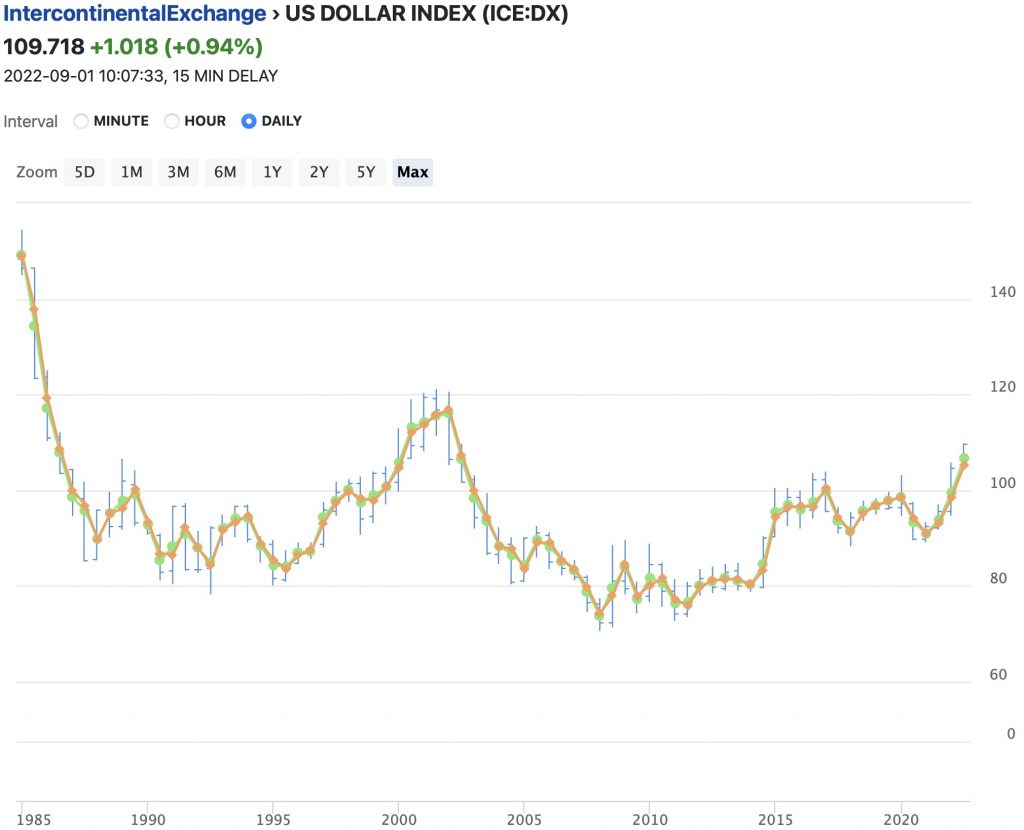 This Can’t Be Good For Business
King World News note:  And then there is this… 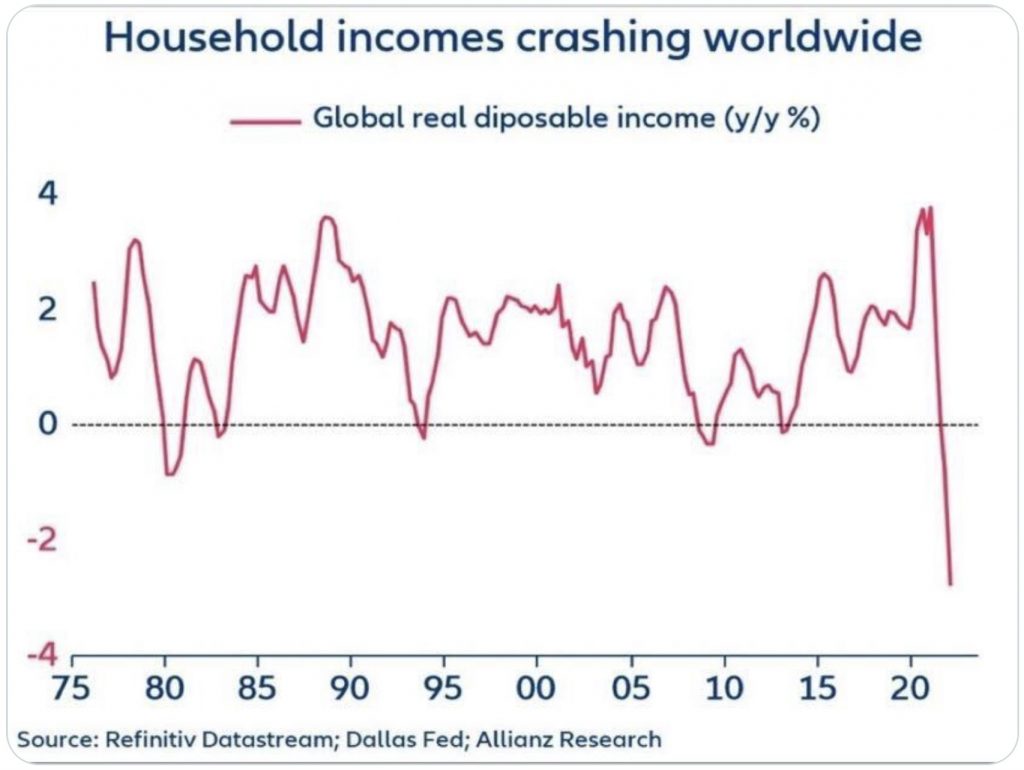 Race To The Bottom
Peter Boockvar:  FreightWaves had a piece yesterday titled “‘Race to the bottom’ in truckload contract rates sets in” that revealed more evidence of economic slowing both in terms of volumes and price.

This Spells Trouble For Truckers

“Pressure is being let out of global freight markets as demand falls and lower volumes in a variety of modes are more easily handled by the capacity and infrastructure built up during the last two years of covid. Transportation rates in several modes, including truckload and ocean container, are falling as demand deteriorates and capacity loosens.“

Their Outbound Tender Rejection Index, “which measures the percentage of truckload shipments rejected by carriers, fell Tuesday to a new cycle low of 5.43%.”

“When carriers feel that they have few attractive options in the freight market, they take the loads they can get, rejecting fewer shipments and accepting more from their contracted customers. Low tender rejections indicate a lack of carrier pricing power; low rejections will also push spot rates lower until they become so attractive to shippers that contract rates too come down.”

Bottom line, just another anecdote on the economic environment that should be heeded.

China Locking Down…Again
The lockdown of the 21mm person Chinese city of Chengdu has industrial metals and oil prices down again. While this of course continues on with the now archaic approach to covid, there was some good news, if followed thru, with China’s covid stance. Hong Kong said they are hoping to end its 3 day hotel quarantine policy in November. Also, they are working with Guangdong province to have people, until then, to first quarantine in Hong Kong and then enter the mainland quarantine free. For the sake of the global economy, let’s hope that after the Party Congress, China decides to ease up on covid.

Economic Weakness In China
China also reported that the Caixin private sector manufacturing PMI fell to 49.5 from 50.4. Power rationing, covid, a general economic slowdown, distress with homebuilders and weakness in export orders all combine for the below 50 print.

“firms commented on weaker demand conditions both at home and abroad. Reduced intakes of new work led to the steepest drop in backlogs since January 2009 and weighed on hiring activity. Confidence regarding the 12 month outlook also turned increasingly negative, which drove firms to cut further back on purchasing activity and inventories.”

Prices paid and received both fell.

Contraction In Korea
On South Korea:

“Contractions in both output and new orders accelerated on the month and were the fastest recorded since June 2020, pushing the headline index to the lowest level for 25 months. Firms often commented on concerns that the economy would continue to perform poorly amid weak demand and challenging global economic conditions.”

Darkening Economic Outlook In Europe
The Eurozone August manufacturing PMI was tweaked lower in its revision to 49.6 from 49.7 initially and vs 49.8 in July. S&P Global said:

“Weak demand conditions were a major drag on goods producers in August, reflecting deteriorating purchasing power across Europe amid high inflation. Manufacturers subsequently cut their buying activity back further in response to the darkening economic outlook, although the reduced need for inputs helped lower the strain on suppliers.”

You could have also just said, ‘skyrocketing energy prices.’

Businesses Panicking In The UK
The UK manufacturing PMI was revised up to a still weak 47.3 from 46 preliminarily, from 52.1 in July.

On the growing possibility of a 75 bps rate hike from the ECB next Thursday, European bonds are selling off again but bonds too were lower in Asia. The UK 10 yr gilt is now up 80 bps over the past 3 weeks. The German 10 yr yield is up 62 bps over the same time frame. After 4 days of declines, the TTF natural gas price is higher but German power prices fortunately are down 6% to a 2 week low and this giving back last week’s parabolic spike of 70%. We’ll see if an aggressive rate hike takes place and if energy prices have peaked in Europe (big IF), maybe, the euro will bottom too. 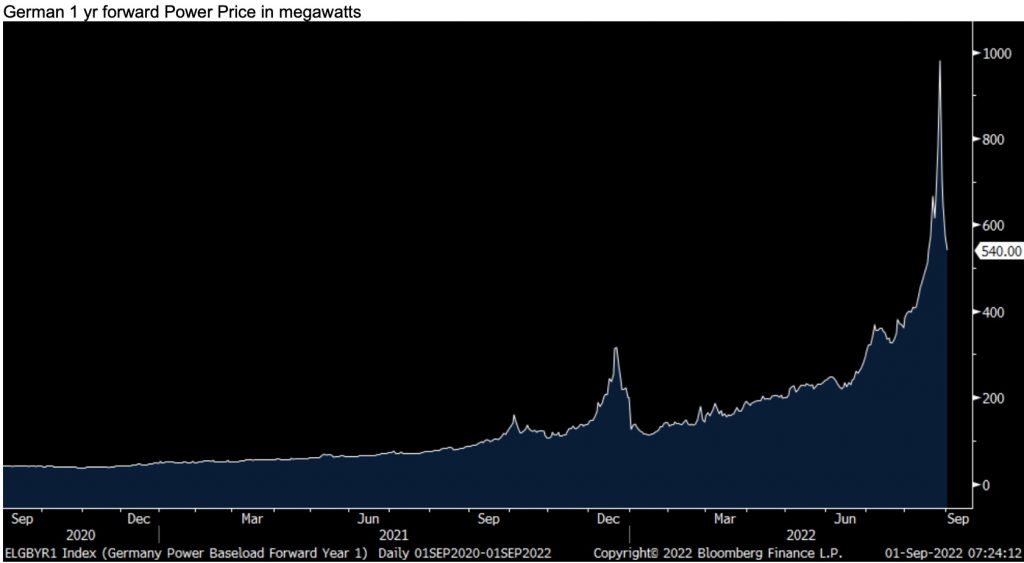