On the heels of Goldman Sachs’s Jeff Currie telling Bloomberg TV, “I’ve been doing this 30 years and I’ve never seen markets like this. We’re out of everything, I don’t care if it’s oil, gas, coal, copper, aluminum, you name it we’re out of it,” it also appears that physical gold and silver are disappearing from the LBMA and Bank of England vaults. This could create some upside fireworks.

Today’s gold performance was very encouraging. But to break out from the 18 month consolidation requires the price to exceed $1850. I guess that bullion banks will to try to stop it doing so. They will eventually fail given inflation dynamics.

Big Picture For Gold Bullish
Graddhy out of Sweden:  Gold big picture we have a probable green rounded bottom/arc. But, much more importantly, we have a blue triangle sitting right on white neckline from 2011-12 high. And, a clear pattern sitting just above/below or on a neckline, usually enhances the strength of the coming move. 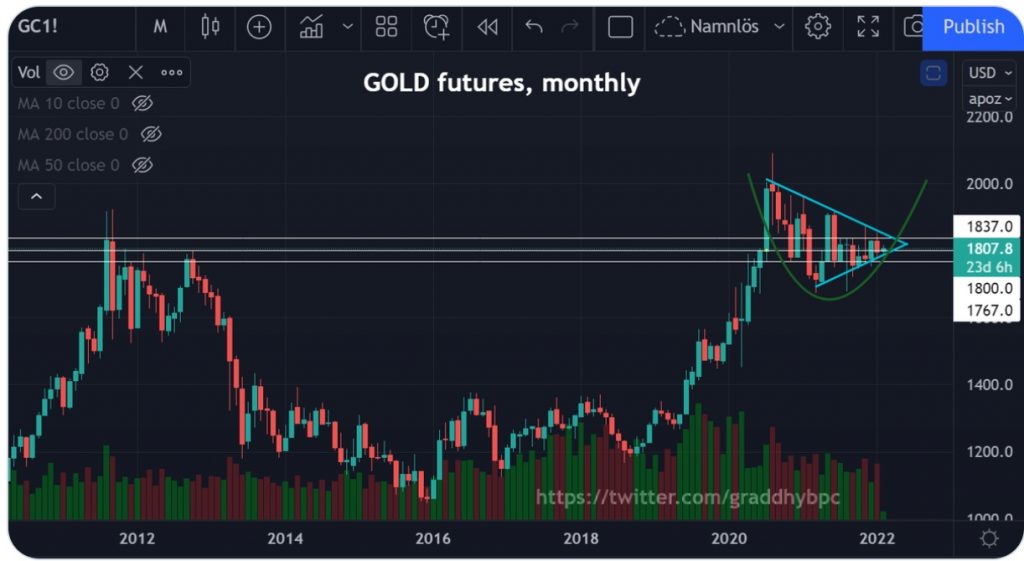 Gold Bullish
Fred Hickey:  Egg on central bankers’ faces. Financial Times calling them out. Forced to tighten just to avoid embarrassment. A “behind the curve” environment (and they’re wayyy behind the curve) is bullish for gold. They’ll not tighten enough to get ahead of the curve…

Land Of The Rising Sun
Otavio Costa:  Oops. We just had a major breakout in Japanese 10-year yields after forming a long-term double bottom. Central banks must allow long-term rates to rise first if they ever want to raise short-term rates. Almost all developed economies are experiencing the same. 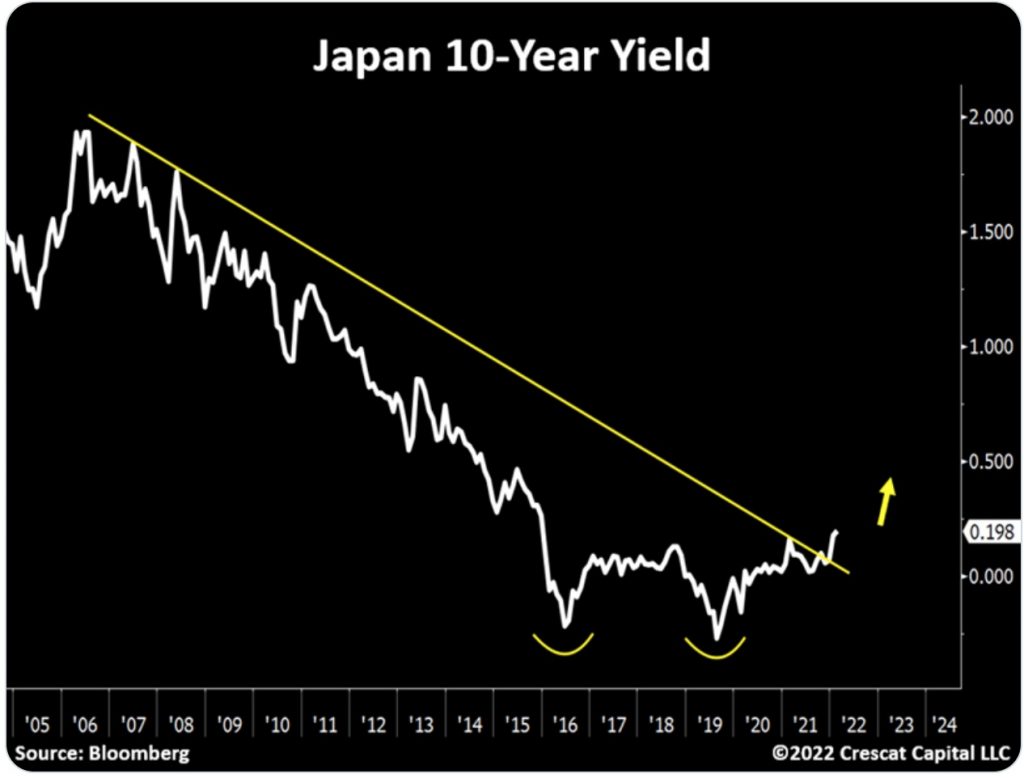 Big Acquisition Fueling Outperformance
Eric King:  “Shawn, Torq has notably outperformed its sector in the last quarter due to a very exciting acquisition for the company and you are still saying your are grossly undervalued. Why do you think that is?”

Shawn Wallace:  “Eric, Frankly it has been a really tough 6 months for all mining and exploration companies in general, however we have successfully acquired some of the best exploration assets I have seen in my career, and I have been doing this for over 30 years. In particular, we most recently acquired the Santa Cecilia Project which sits in one of the world’s most prolific mining belts in Chile called the Maricunga. In addition to the geological address, it sits adjacent and proximal to two 20 million ounce gold and 6 mill pound copper deposits known as Capsiche (adjacent) and Cerro Casale, which are owned and operated by the Norte Abierto JV comprised of mining giants Newmont and Barrick.”

Eric King:  “This is incredible, Shawn. What is so appealing about this project?”

The Big Brother Of Capsiche
Shawn Wallace:  “An industry expert recently comment that the Santa Cecelia looks like the big brother of Capsiche. This conclusion was logically drawn due to the nature of these large bulk tonnage systems coupled with the fact that there are 4 massive gold and or copper targets on which initial discovery holes were drilled historically. One of the most impressive holes in that historical data is the 945 meters of .45% copper equivalent. Additionally this hole, which categorically confirms major porphyry mineralization with impressive grade and width and that is wide open in all directions and to depth, is amazingly situated under an oxide gold cap which provided  great results in the previous drilling. This is truly a minefinders dream with the potential of an oxide gold deposit at the top of a hill, on top of a potential world class gold-copper porphyry, on one of the most prolific mining trends in the world, and surrounded by two major gold-copper deposits. Furthermore there is another porphyry target to the east on the project and a high-grade vein system to the west.

High-Grade Gold Discovery
Right after we acquired the project in late October we began working closely with the local communities to establish long term sustainable social agreements for permitting and access. We anticipate concluding this process shortly and if all goes well we will be drilling before the summer of this year to further test the oxide gold in the porphyry as well as a couple of holes on a high-grade gold discovery that looks to us as though it could get significantly bigger. I think once that is underway the opportunity will begin to gather some real momentum from a capital markets perspective and we will be off to the races. Our team is primed and ready to execute on all of our initiatives and we are fortunate to be working with some of the best professionals in the Chilean mining business. Torq Resources, symbol TORQ in Canada and TRBMF in the US.