As the prices of gold and silver remain under pressure in the paper markets, in the real world no physical gold and silver is available other than very small quantities.

Sell-off: the final stages?
September 6 (King World News) – Alasdair Macleod:  Gold and silver prices fell further this week as traders assessed increasing evidence that central bank interest rate policy is likely to drive major economies into deepening recession, potentially undermining commodity prices and those of gold and silver. In European trade this morning, gold traded at $1705 having dipped below $1700 yesterday, for a net fall of $31 from last Friday’s close. Silver fell a dollar to $17.90 over the same timescale.

As our headline chart shows, gold has lost 7% of its dollar price this year so far, and silver 24%. 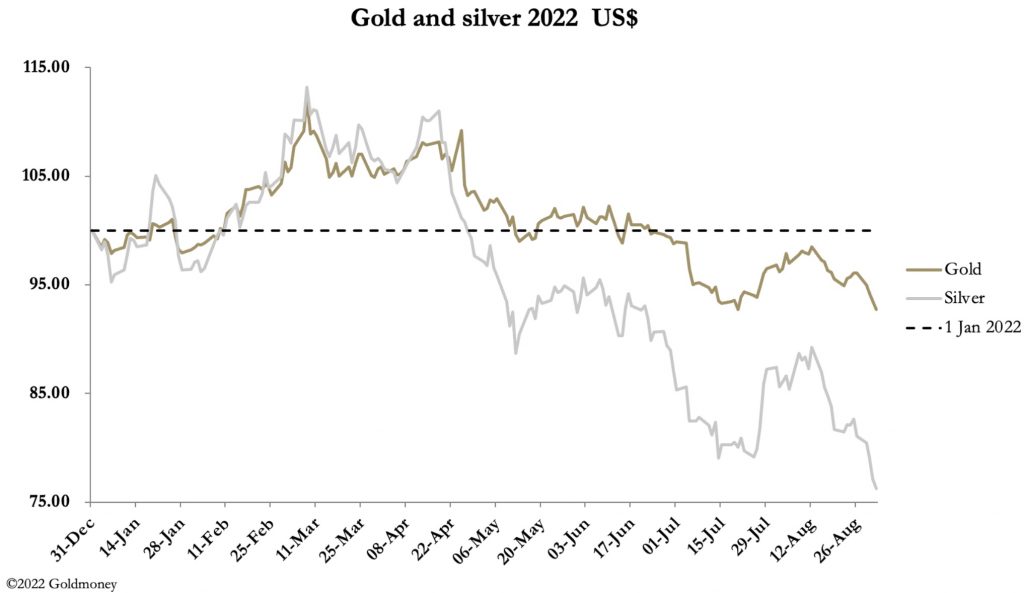 But this sell-off has also seen WTI oil fall 31% since early June. Driving the relationship between the dollar and commodities has been a strong dollar measured by its trade-weighted index. This is next. 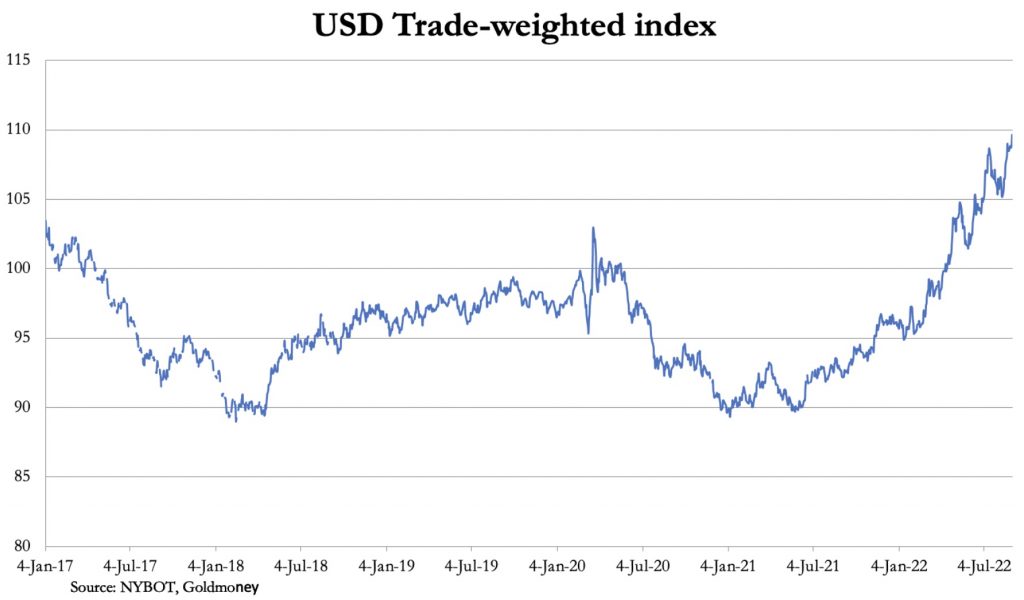 No Large Quantities Of Physical Gold & Silver Available
Through derivative markets, it is this relationship with other major currencies — principally the euro — that is driving all prices. In the real world, we see the Fed embarking on a higher interest rate policy, while the ECB and the Bank of Japan are dragging their heels. The Bank of England and the Westminster politicians are in limbo. Through derivatives, speculators are buying the dollar by shorting the other currencies, and cutting long positions in commodities, including gold and silver. There is no physical gold and silver other than very small quantities, and minor central banks are hoovering up what they can while the opportunity lasts.

While gold and silver bugs are undoubtedly dismayed by headline prices, they should be aware that the establishment — the bullion banks and market makers ­— are closing their short positions. This next chart illustrates it in silver.

Bullion banks and market makers almost always take the short side on Comex, which means that Open Interest is an excellent overall indicator of their books. We see that it is as low as it has ever been since 2015. And looking at the underlying numbers, we find the Managed Money category is unusually short. This is next. 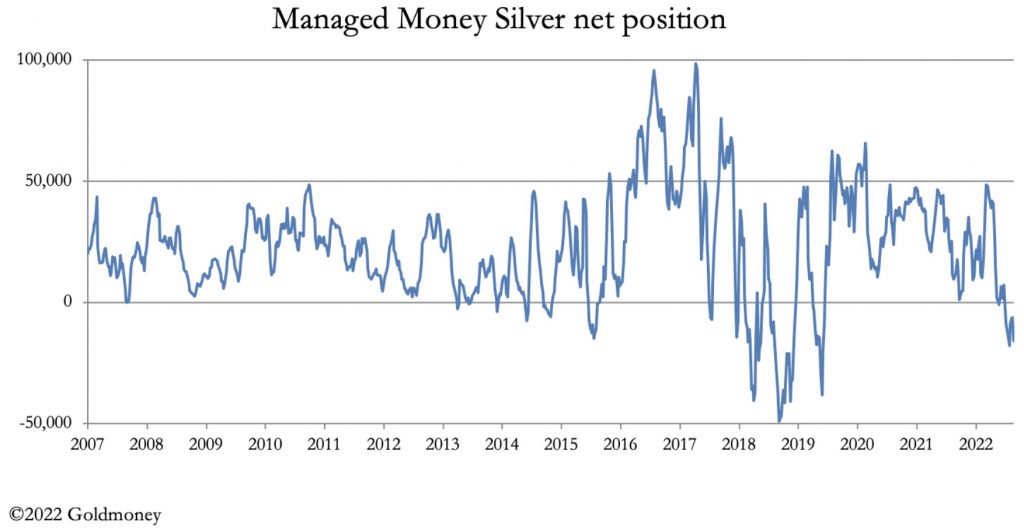 Other than the 2018-2020 bear market which saw silver sold down to under $12, the hedge funds’ net position is as oversold as it gets, being net short 15,824 contracts, representing 79 million ounces, in a market where there is very little physical silver available. This is a setup for a major bear squeeze.

The ineptitude of hedge funds is more clearly illustrated in the Comex gold contract. 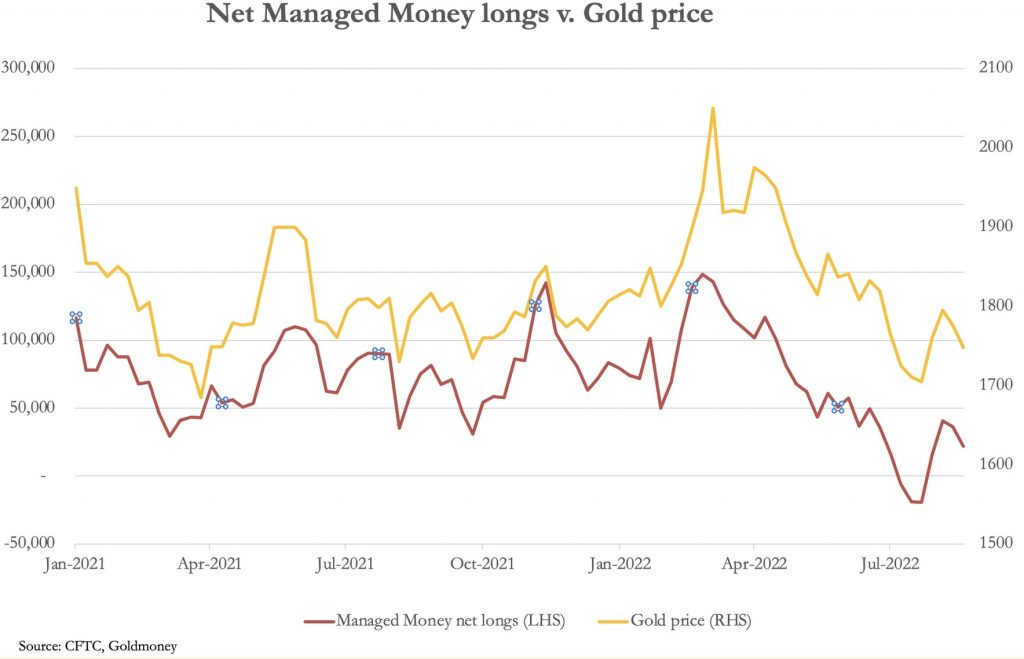 Since January 2021, the Managed Money position has shown aa high correlation with the gold price. What this means is that when the gold price is high, hedge funds are long, and when it is low, they are short. In other words, they consistently lose money, and their net position is an excellent contrary indicator.

In the real world, common sense and observation tell us that falling commodity and precious metal prices are a pause in the declining purchasing power of all currencies. And that with Russia being the largest energy exporter in the world, trade relations will almost certainly lead to further price shocks this autumn.

Creating the Dominant Player in Chapais Chibougamau Gold Camp
This acquisition Cements SUP as the dominant player in the Chapais Gold Camp with the largest land position in the camp at over 62,000 hectares, 4 large and expanding gold deposits (Croteau Est, Chevrier, Lac Surprise and now Philibert)

With Croteau, Chevrier existing resources and now Lac Surprise and now Philibert  moving towards a resource declaration in 2023 one can see line of sight to potentially 4mm + oz  in the near term with all 4 properties having significant exploration upside potential beyond that number.

This acquisition and the prior acquisition of Genesis Metals in June brings a critical mass of resources in a concentrated area which dramatically increases the chance of economic development of these oz and their potential value as all these 4 deposits lie within a 50km radius and are adjacent to the 3.2 million oz Nelligan Deposit owned by IAMGOLD.

This large gold endowment was controlled by 4 seperate companies only 4 months ago and today is now controlled by only 2. This means that potentially 7mm oz or more of Gold are now highly consolidated in a contiguous area.

Simon Marcotte, will become the CEO of the newly formed company

Simon was most recently involved with Arena Minerals and its launch in lithium in Argentina and the subsequent strategic investments by both Ganfeng and Lithium Americas. He is also a director and co-founder of Freeman Gold Corp. in Idaho (which is now led by Paul Matysek as Executive Chairman). Simon also started Mason Graphite and more recently negotiated and executed a Joint Venture with Nouveau Monde Graphite, which was a pretty high-profile announcement in Quebec recently. He was also well known for his involvement in gold with Belo Sun Mining from 2010 to 2014. Prior to his corporate involvement, Simon was with CIBC World Markets and Cormark Securities…

Mr. Cantore is a seasoned capital markets professional specializing in the resource sector. He has more than 30 years of advisory and leadership experience having begun his career in 1992 as an investment advisor and then moving into management roles at both public and private companies. One of the most recent successes is being at the helm of Amex Exploration which has gone from just a couple of million dollars of market capitalization when he took the leadership role to a peak of $400 million and more recently at $200 million market capitalization.   During his career he has organized and structured numerous equity and debt financings, mergers and acquisitions, joint venture partnerships and strategic alliances. Mr. Cantore serves on the boards of various companies both private and public.

Michael Gentile (me) will remain the largest single shareholder of SUP and lead independent director of the new combined company.

Extremely Rare Combination
This will create an extremely rare combination of a consolidated mining camp with emerging economic scale in a Tier 1 jurisdiction, coupled with a strong geological and capital markets team.

Compelling Pro Forma Valuation
Pro Forma Entrepresive Value of approximately $60 million CAD which in comparison to the resource and size potential looks very attractively valued, if you now believe as I do that this consolidation has dramatically increased the economic value of these oz and the likelihood that these oz now become part of an economic mine plan at some point in time then the likelihood of a major re-rating on the value of these oz has dramatically increased.

Potential initial resource declarations on Lac Surprise and Philibert in 2023.

Potential spin out of TPK and Ontario properties.

Additional consolidation opportunities in the camp
In short, I could not be more excited about this combination and the rapid consolidation of the Chapais Chibougamau Gold Camp achieved by Northern Superior, I see significant potential for a dramatic re-rating in the stock as the market understands the size and scale of the resources already uncovered at all 4 properties and the increasing likelihood that the size and scale required for an economic development of the Chapais Gold camp is rapidly coming into view. Northern Superior Resources, symbol SUP in Canada and NSUPF in the US. To learn more about this exciting company CLICK HERE.

Turkish Contagion, Gold And The US Dollar

The War In Gold And The U.S. Dollar Is Continuing To Rage As We Head Into 2016