When it comes to precious metals, one needs to believe. Plus a look at the big picture on a day when gold and silver were smashed by the algos.

Precious Metals: One Needs To Believe
June 17 (King World News) – Graddhy out of Sweden:  We should never forget that with precious metals, we are placing a bet against the whole FIAT monetary system on the planet, as Nixon took US dollar off gold standard in 1971 (1973 more correct). My point is, we should not expect this to be an easy ride. As said, one needs to believe.

And now for a look at the big picture…

Five Context-Givers on One Big Mess
Matthew Piepenburg at Matterhorn Asset Management (based in Switzerland):  Fact checking politicos, headlines and central bankers is one thing. Putting their “facts” into perspective is another.

Below we place economic growth, Treasury market growth, stock market growth, GDP growth and gold price growth into clearer perspective despite a global backdrop that is anything but clearly reported.

Context 1: The Rising Growth Headline
Recently, Biden’s economic advisor, Jared Bernstein, calmed the masses with yet another headline-making boast that the U.S. is “growing considerably faster” than their trading partners.

But given that the U.S. is running the largest deficits on historical record…

US Running Largest Deficit In History 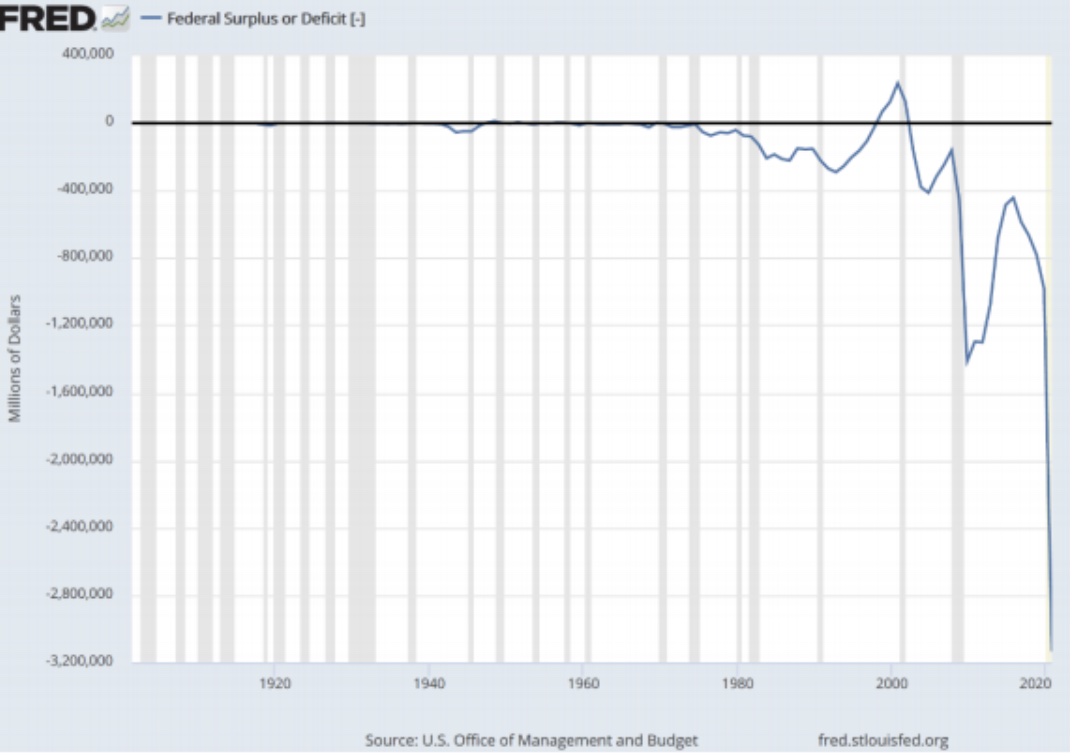 …such “growth” is not surprising.

In other words, bragging about growth on the back of extreme deficit spending is like a spoiled kid bragging about a new Porsche secretly purchased with his father’s credit card: It only looks good until the bill arrives and the car vanishes.

In a financial world gone mad, it’s critical to look under the hood of what passes for growth in particular or basic principles of price discovery, debt levels or supply and demand in general.

In short: “Growth” driven by extreme debt is not growth at all–it’s just the headline surface shine on a sports car one can’t afford.

And yet the crazy continues…Take the U.S. Treasury market, for example.

Context 2: The Treasury “Market”?
How can anyone call the U.S. Treasury market a “market” when 56% of the $4.5T of bonds issued since last February have been bought by the Fed itself?

Sounds more like an insider price-fix than a “market,” no?…

Such context gives an entirely new meaning to the idea of “drinking your own Kool-aide” and ought to be a cool reminder that Treasury bonds in general, and bond yields in particular, are zombies masquerading as credit Olympians.

The Fed, of course, will pretend that such “support” is as temporary as their “transitory inflation” meme, but most market realists understood long ago that more and crazier bond yield “support” is the only way for national debt bubbles (and IOU’s) to stay zombie-like alive.

In short, the better phrase for Treasury “support,” “accommodation,” or “stimulus” is simply: “Life Support.”

With central banks like the Fed continuing to create fiat currencies to monetize their unsustainable debt well into the distant future, we can safely foresee a further weakening of the USD and further strengthening of gold prices, mining stocks and key risk assets like tech and industrial stocks.

Context 3: Rising Stock Markets
Despite reaching nosebleed levels which defy every traditional valuation ceiling, from CAPE ratios and Tobin ratios to book values and FCF data, the headlines remind us that stocks can go even higher—and they can indeed. 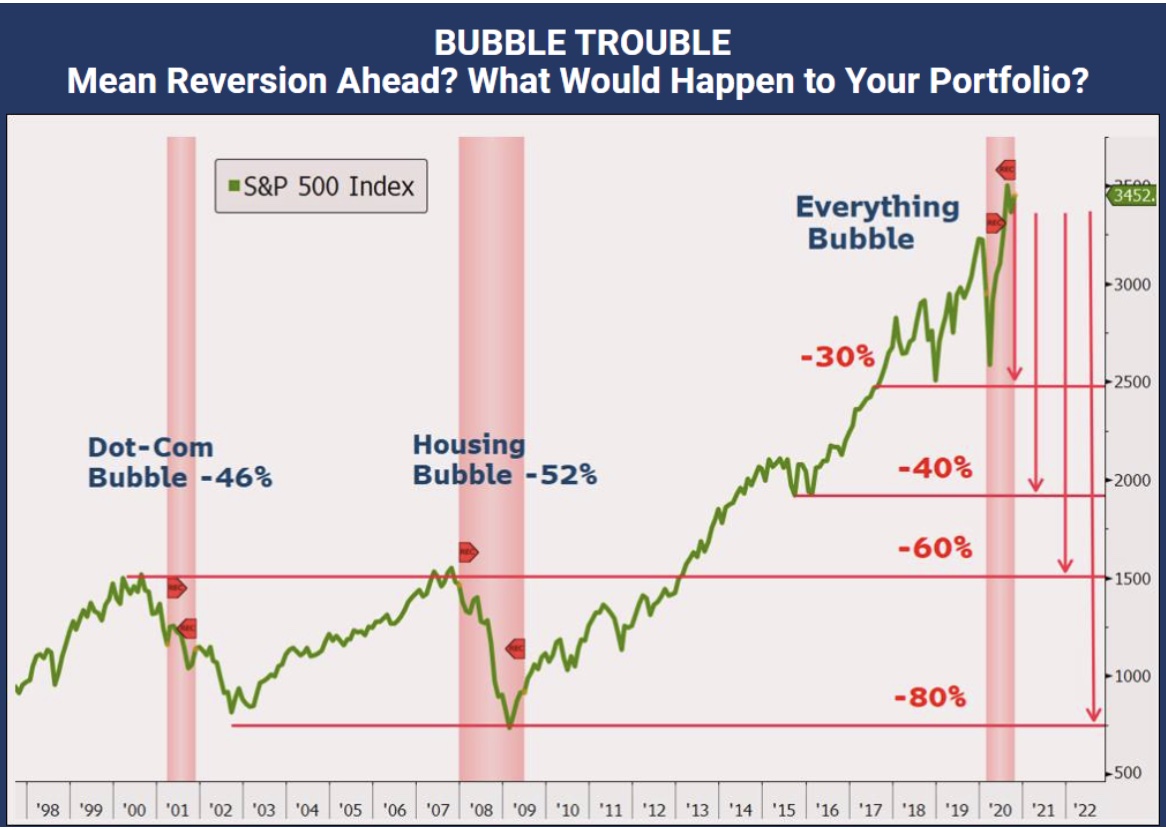 No Treasure in Treasuries = Lot’s of Air in Stocks
Based upon the objective facts above, we now know that the only primary buyers showing up at U.S. Treasury auctions is the Fed itself.

This is because the rest of the world (Asia, Europe etc.) doesn’t want them.

The next question is “why”?

The answer is multiple yet simple.

First, and despite the open myth of American Exceptionalism, investors in other countries can actually think, read and count for themselves, which means they’re not simply trusting the Fed—or its IOU’s– blindly.

Stated otherwise, they are not buying the “transitory inflation” or “strong USD” story pouring out of the FOMC mouthpieces…

Insiders just invested another $56 Million in this 12 million ounce Canadian gold
company! TO FIND OUT WHICH ONE CLICK HERE OR ON THE IMAGE BELOW.

Inflation is not only rising in the U.S., it’s also creeping up elsewhere—even in Japan, but especially in China. This is largely because the U.S. exports its inflation (and debased dollars) offshore via trade and fiscal deficits.

Such deliberate inflation exporting by the U.S. places those countries (creditors) that lent money to Uncle Sam into a dilemma: They can either 1) let their currencies inflate alongside the dollar (hardly fun), or 2) try to quell the outflow of exported (debased) US dollars to save their own currencies from further debasement.

Option 2, of course, is the better option, which means foreign investors need to buy something more appealing than discredited U.S. Treasuries.

Sadly, ironically, and yet factually, the only assets better than bogus US Treasuries are bloated U.S. stocks.

In short, nosebleed-priced US stocks are still the lesser of the two US evils, and foreigners are therefore buying/seeing stocks as a better hedge against the debased USD than sovereign bonds.

See for yourself—the rest of the world is adding lots of air to the U.S. equity bubble: 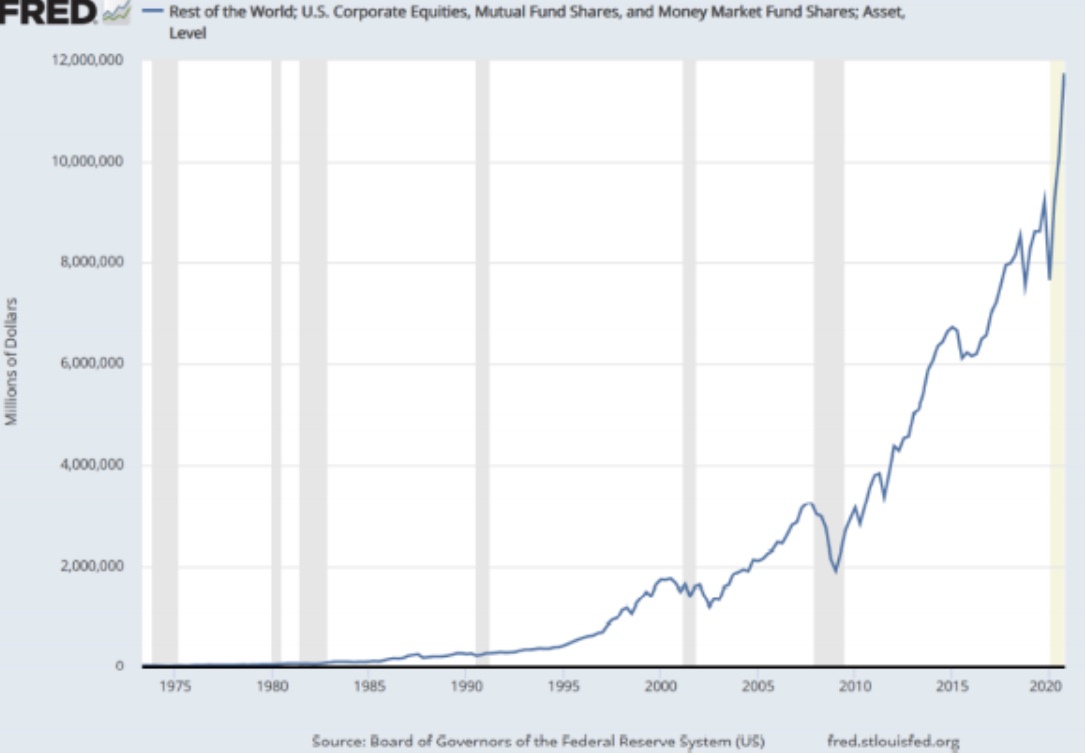 This is contextually troublesome for a number of reasons.

Longer term, this simply means that via direct stock ownership, foreigners will slowly own more of corporate America than, well America…

As for this slow gutting of the once-great America to foreign buyers, don’t blame the data. Blame your Fed and other policy makers for selling-out America and pretending debt can be magically solved with magical (fake) money creation.

Of course, the second pesky little problem with stocks rising beyond the pale of sanity, earnings and honest FCF data is a thing called volatility—i.e., market seasickness.

Nothing goes in a straight line, including the dollar or the market. There will be swings.

Right now, the short on the USD is the highest it has been in four years.

US Dollar Short Trade Most Crowded In 4 Years 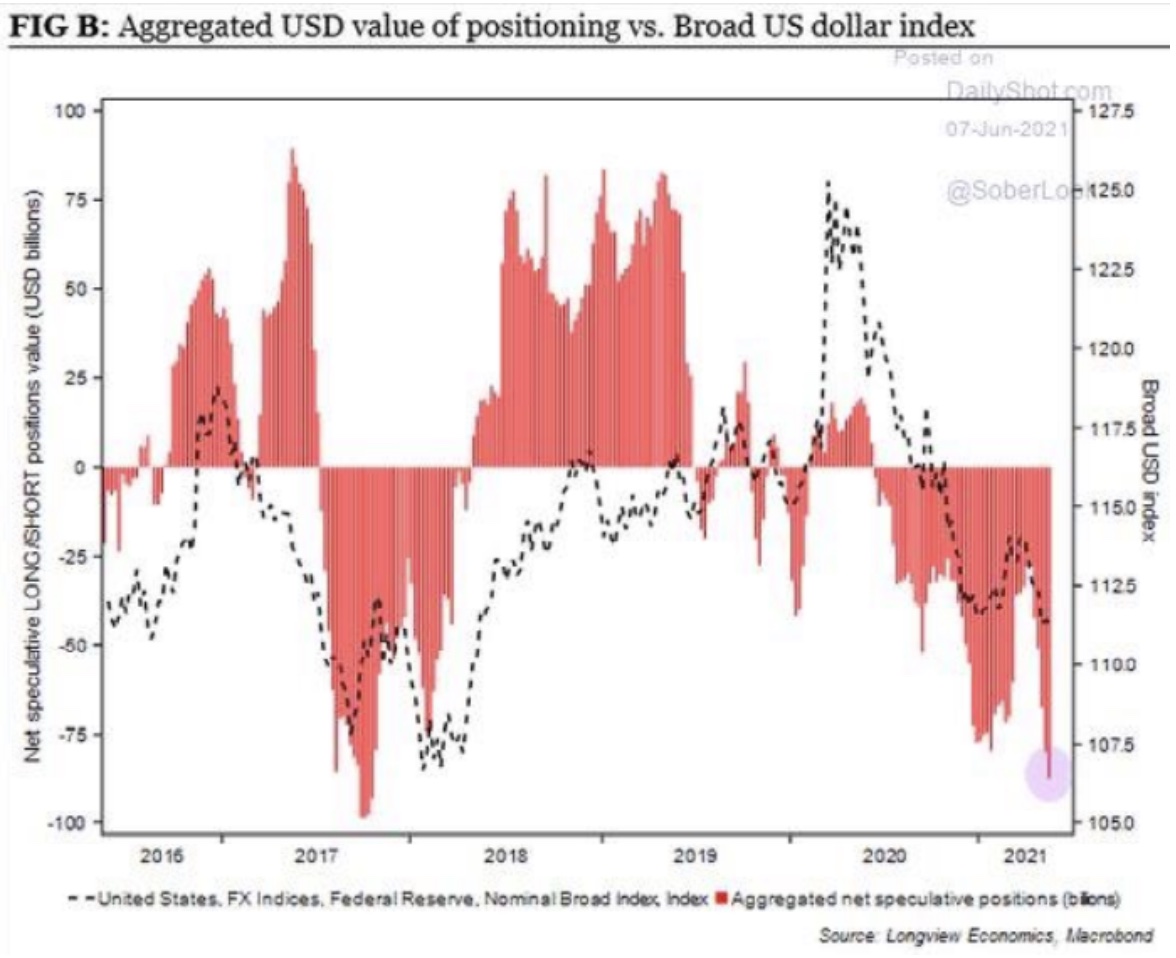 Yet if, by some chance, the Fed ever attempts to taper or raise rates, all those foreign dollars piling into U.S. stocks (above) create a bubble the pops, as do the foregoing dollar shorts, which get squeezed.

That could cause a massive sell-off in U.S. equity markets as foreigners sell their stocks to buy more dollars.

In short, there’s a lot of different needles pointing at the current equity bubble.

Context 4: The Dark Side of “Surging” GDP Growth
The World Bank recently made headlines projecting 5.6% global GDP growth, the fastest seen in 80 years.

Well, not when placed into context…

The last time we saw 5.6% global GDP growth was during a global world war.

Obviously, when the world is in a state of global military rubble, growth of any kind is likely to “surge” from such an historical (and horrific) baseline.

Coming out of World War II, everyone, including the U.S. was in debt. World wars, after all, can do that…

As the victorious and civilization-saving U.S. came out of that war, it made some justifiable sense to de-lever that noble yet extreme debt by printing money, repressing bond yields and stimulating GDP growth.

What followed was an entirely defendable/acceptable 40-year stretch in which US nominal GDP ran 500-800 bps above US Treasury yields.

In short, bond-holders got slammed, but the cause, crisis and re-building after defeating the Axis powers justified the sacrifice.

The same, however, can not be said today as bond-holders get crushed yet again in a new-abnormal in which GDP will greatly (and similarly) outpace long-term bond yields.

Needless to say, current policy makers, the very foxes who put the global economy into the current pile of debt of rubble, like to blame this on COVID rather their bathroom mirrors.

Ironically, however, central bankers (as opposed to the Wehrmacht, the Japanese Empire or Italy’s Mussolini) managed to do as much harm to the global economy today (with deficit policies and extend-and-pretend money printers) as Germany’s Blitzkrieg or Hirohito’s Banzai raids did in the 40’s.

When it comes to context, can or should we really be comparing a global flu (death toll 3.75M) to a global war (death toll 85 million)?

Folks like Mnuchin (last year) or Yellen, Powell and the IMF (this year), are in fact trying to convince themselves and the world that the war against COVID was the real casus belli (reason for a justifiable war) of our current debt distress—equal in scope to World War II in its drastic impact on the financial world.

In short, and regardless of anyone’s views on the COVID Crisis o its questionable policy reactions, comparing its economic impact to World War II is an insult to both history and adjectives.

The simple, objective and mathematically-confirmed fact is that the global economy was already in a debt crisis long before the first Corona headline of early 2020. 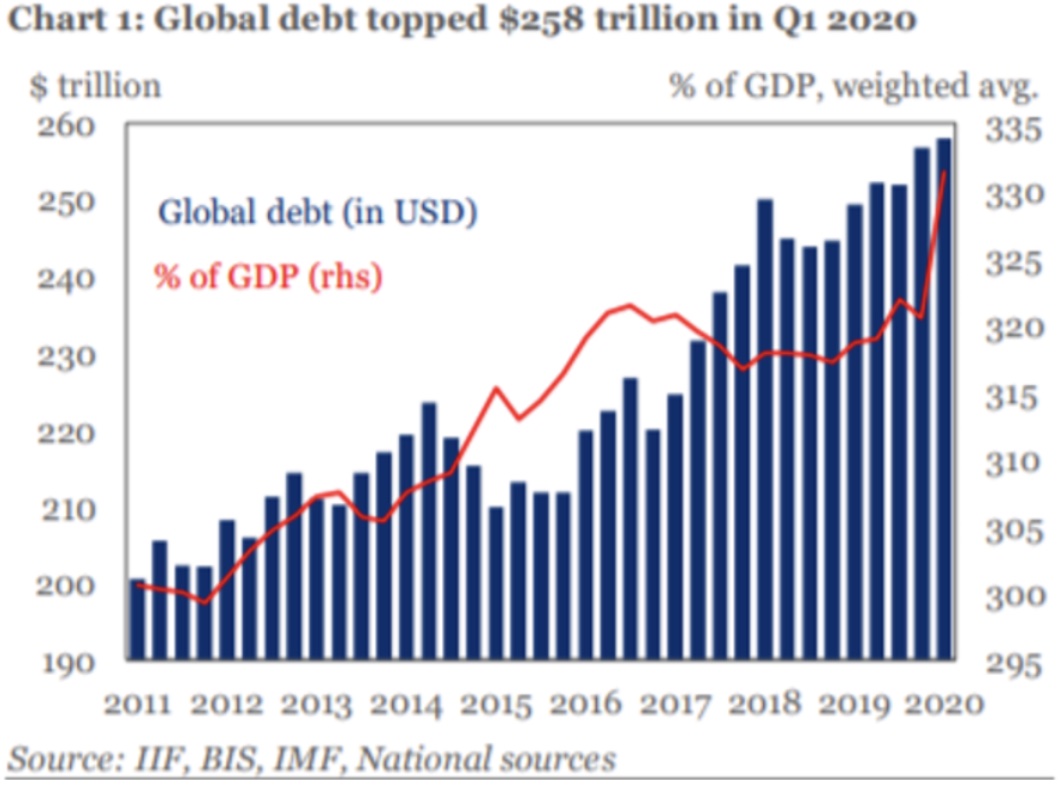 Today, US debt to GDP is at levels it has not seen since the Second World War, and it’s projected to go much, much higher.

So, just in case you still think the Fed can and will raise rates today to fight obvious inflation, as it did in the 1970’s or 1980’s, think again.

Given this self-inflicted (rather than COVID-blamed) reality, the Fed simply can’t afford to raise rates. Period. Full stop.

Context 5: That Barbaric Relic?
What the foregoing inflation and rate context means is that in the years ahead, inflation will run higher and rates will run (be forced/controlled) lower.

This further means that real rates (i.e., those adjusted for inflation) could run as deep as -5% to -10% in the years ahead.

Such negative real rate levels could easily surpass those seen in the 70’s and 80’s, which means gold (and silver), both of whom love negative real rates, has nowhere to go but up, up and away in this totally debt-distorted backdrop.

How’s that for context?…This will link you directly to more fantastic articles from Egon von Greyerz and Matt Piepenburg CLICK HERE.