Reports out of London and Zurich indicate that there is no physical gold or silver available in size in either London or Zurich, Switzerland. The only question remaining, is the Bank of England leasing gold in a desperate attempt to keep the price in check?

February 19 (King World News) – Alasdair Macleod out of London:  As our headline chart illustrates, gold and silver appear to be going their separate ways, with gold drifting lower while silver gradually ticks higher. 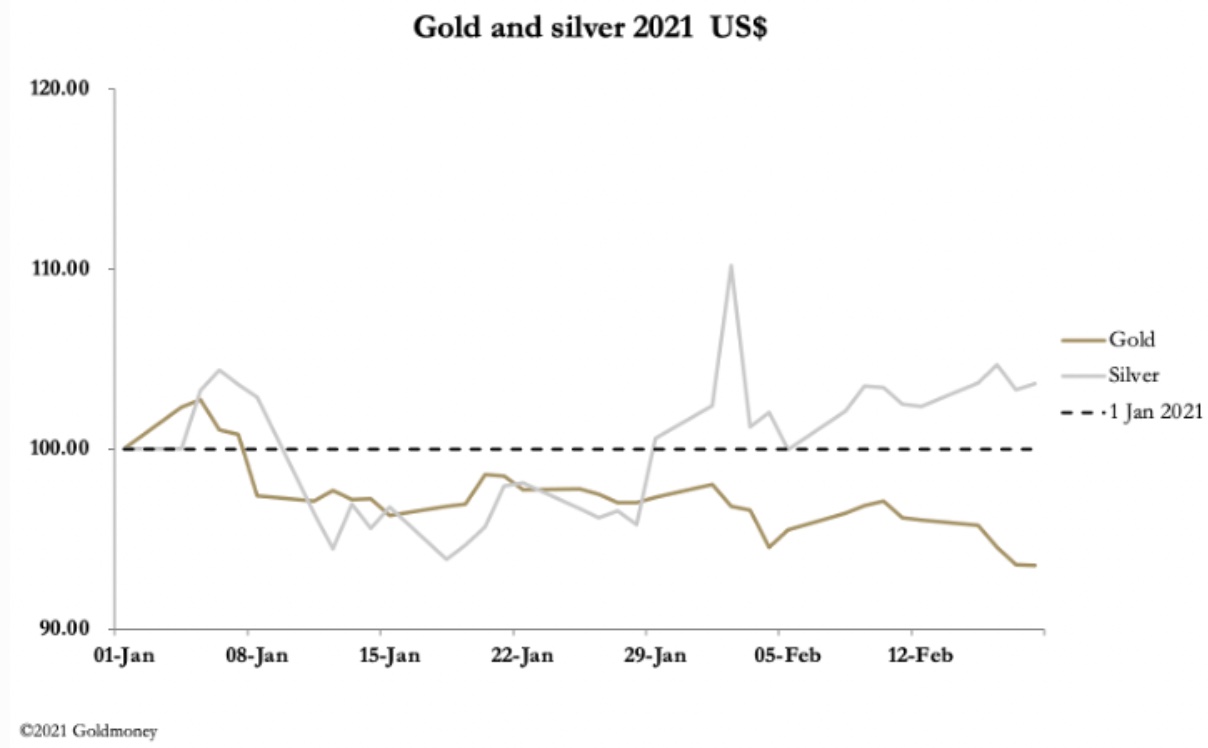 This week, gold fell $51 from last Friday’s close to trade at $1772 in European morning trade today, while over the same time zone silver drifted 20 cents lower to $27.07.

The fall in the gold price since early January contrasts with all other inflation indicators, except the increasingly meaningless CPI. The table below shows how cryptocurrencies, commodities and equities have performed since 23 March, when the Fed’s accelerated QE was introduced. 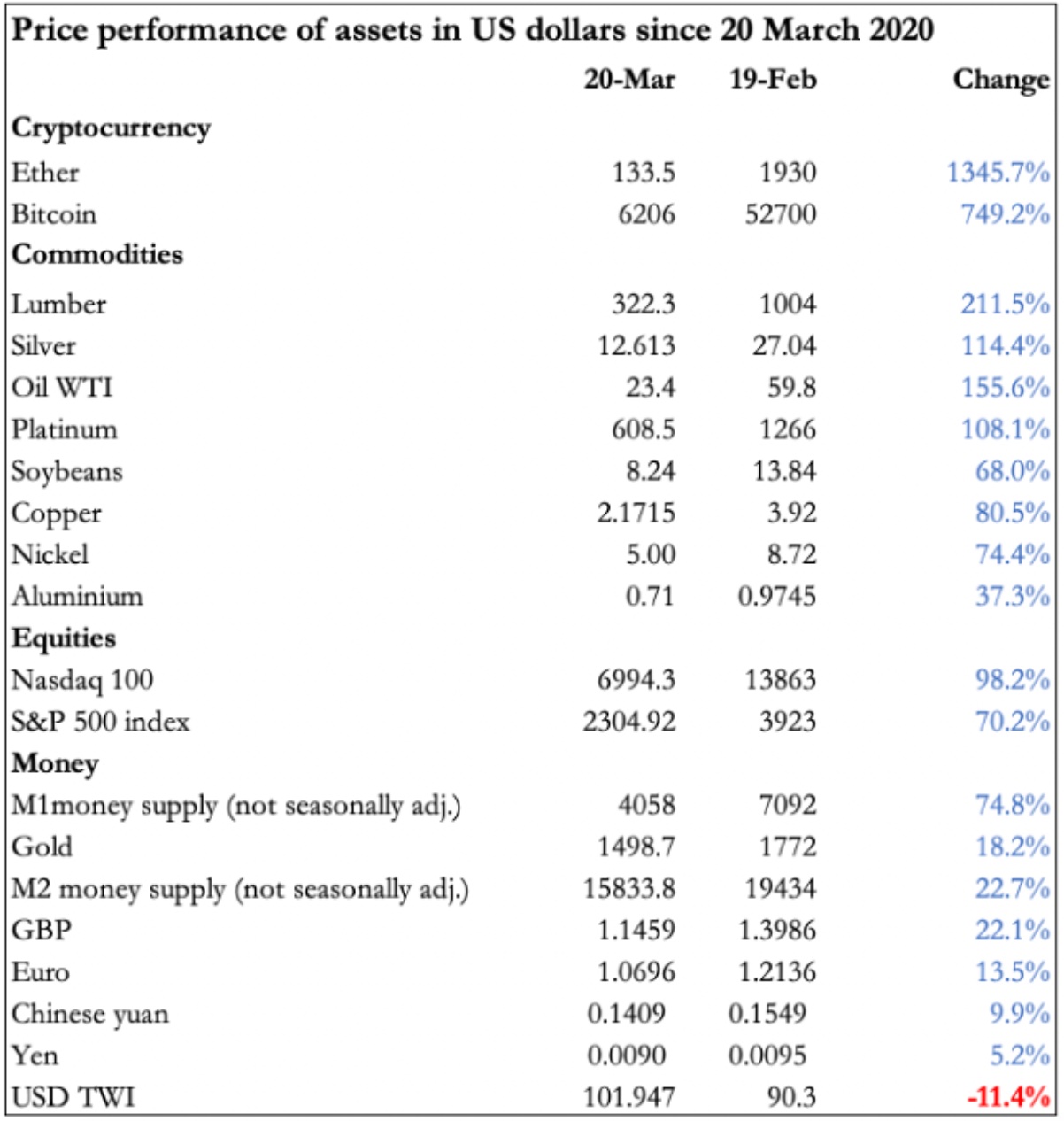 Without doubt it is monetary inflation driving prices, because there is no offset to these price increases. Having fallen $300 since August, the price of gold is the notable exception: why?

No Physical Gold Or Silver Available In Size In London Or Zurich
The financial world is dominated by the macroeconomic theory of the inflationists. They do not realise that the rises in prices evidenced in the table above are the result of monetary inflation and do not portend a genuine economic recovery when the lockdowns are over. The bullion banks are desperately short on Comex, and there is no bullion in size available in London and Zurich. They are trapped and have to believe in the Keynesian no inflation myth. Our next chart confirms their problem. 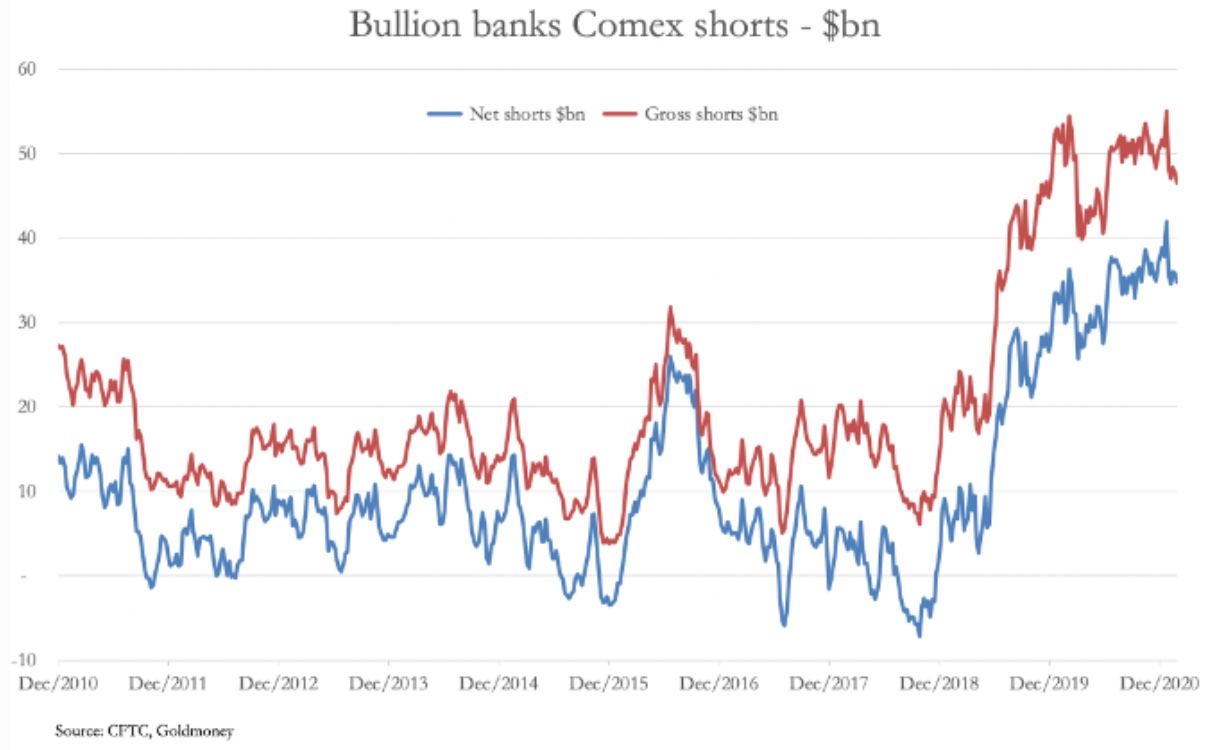 Their net short position first hit record levels in December 2019, leading to a crisis which the establishment tried to resolve by a coordinated bear raid the following March, driving the price down from $1700 to $1460 in only six trading sessions. But the bullion banks’ net short liabilities never fell below previous records and the gold price then rose rapidly to a high of $2075 on 7 August…

Clearly, the move down to current levels over the last six months is an attempt by bullion banks to close their shorts at a time of accelerating monetary inflation. Failure to do so risks breaking them and creating a crisis at the heart of the financial system.

What we don’t see is the amount of central bank leasing to provide temporary liquidity in London. We got a sniff of that last August when it was revealed that 40 tonnes of GLD’s gold was in the Bank of England’s vaults. But today, it is likely that the Bank is redoubling its efforts in a covert leasing operation to keep an inevitable crisis at bay.

It cannot succeed for long in these inflationary times and the next run up in the gold price could provoke a serious and very public crisis. And as for silver, the shortages of physical are less easy to deal with, and could be the canary in the mine. To listen to Alasdair Macleod discuss the shortage of available physical gold and silver in London and Zurich CLICK HERE OR ON THE IMAGE BELOW.

KWN has just released an audio interview with legendary Pierre Lassonde and you can listen to it by CLICKING HERE OR ON THE IMAGE BELOW.

Also released! If You Are Worried About The Action In Gold & Silver Just Read This CLICK HERE TO READ.