With the price of gold consolidating and silver approaching a major breakout, today James Turk spoke with King World News about why the price of silver is about to soar.

The Puzzle That Is Silver
July 15 (King World News) – James Turk:  “I think people are starting to recognize that a bull market in gold is developing, Eric, and likely to have a long way to run. Things are falling into place nicely as one would expect, with one exception – silver. But I think that is about to change…

Why I Am So Bullish On Silver
Here is how I see silver. It explains in part why I am so bullish about its prospects. Geologists tell me that there is somewhere between 12-to-30 times more silver than gold in the earth’s crust. So the natural ratio between these two metals should be somewhere in this range. Recently, however, the ratio has been in the low 90s, compared to 30 when silver peaked in its last bull run in 2011. My point is that the ratio should be falling, which it normally does in precious metal bull markets. But so far it hasn’t, which is the anomaly that I believe creates a unique opportunity for value investors.

Look at it this way. There have been 11,186 trading days on the Comex since the prohibition of owning gold was lifted in January 1975. The ratio traded at 93 – its present level – or higher on only 82 days. And most of those days were in the early 1990s when silver was under $3 per ounce and at the end of a 10-year bear market. Of course these results do not guarantee anything, but it does highlight how undervalued silver is relative to gold. So the probabilities suggest that buying physical silver here makes good sense, as does the following chart of the London spot silver price, which is one of my favorites. 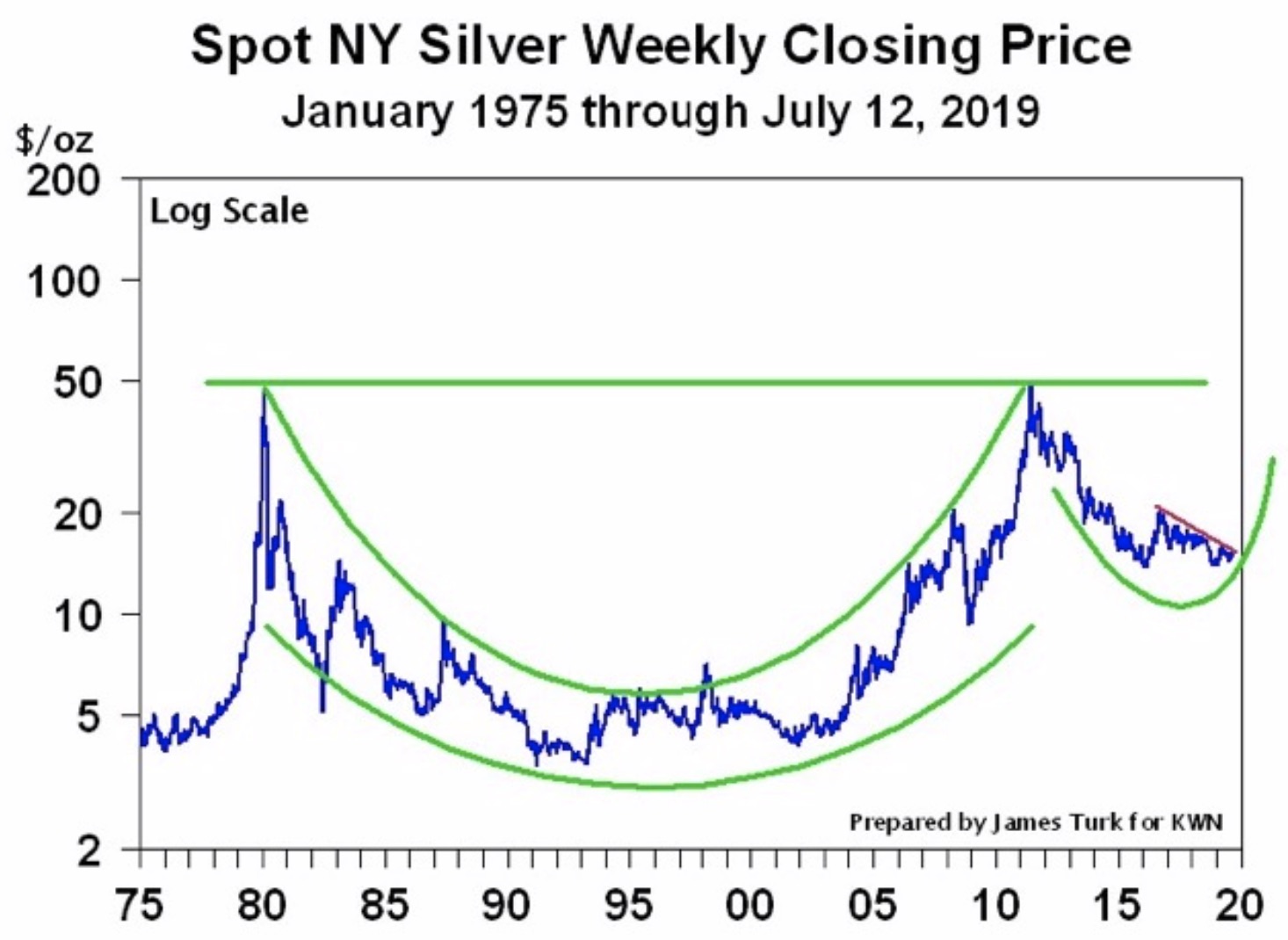 Silver’s Multi-Decade Cup & Handle Formation
Silver has been forming a massive, multi-decade cup and handle formation. This pattern is telling us that silver has formed a huge base in which it has been accumulated. But look at the red downtrend line on the chart. Over the past several years silver has been forced lower. Silver right now is like a coiled spring that has been wound ever tighter. When silver eventually hurdles above that red line – which it is bumping against right now – and then confirms the breakout by moving above its previous peak around $16.10, I expect a repeat of the huge spike in silver that we saw from 2010-to-2011. That was when, in less than a year, the price of silver nearly tripled.

So getting back to my original point, Eric, up to now silver has been the ‘fly in the ointment’ in gold’s new bull market. But I suspect soon that silver will be leading gold higher. We should therefore be looking for the gold/silver ratio to start falling, which will mean that silver will outperform gold. And this outperformance is what represents the real reward for bargain hunters looking at this opportunity to buy physical silver.”

AUDIO NOW RELEASED!
King World News note: There was a short delay in the release of the latest audio interview with the man who helps to oversee more than $200 billion and you can now listen to it by CLICKING HERE OR ON THE IMAGE BELOW.

Another Bullish Gold Catalyst, Plus The “Light” At The End Of The Tunnel CLICK HERE TO READ

Big Picture Bullish For Gold But Look At What Hedge Funds Are Up To, Plus Chart Of The Week And Many Other Surprises CLICK HERE TO READ