Today Michael Oliver, the man who is well known for his deadly accurate forecasts on stocks, bonds, and major markets, shared with King World News exclusively his “Open Letter To Gold Bears.”

Open Letter To Gold Bears – Watch The Clock
June 14 (King World News) – Michael Oliver, Founder of MSA Research:  Gold bears must be frustrated at this point. They’ve been selling repeatedly into gold especially since mid-June last year (gold was then in the mid-$1800s). That was when the Fed first announced their policy change to raise rates and shrink their balance sheet. And since then, often timed with a new Fed meeting/minutes/rate hike, gold has been sold into heavily. But so far it’s been a broad down and then up process for the bears. Nice drops, but not deep enough to provide more than just another quick trade, and no drop to and through the corrective low of March 2021 of $1673. And so they’re selling again—since March. Will they manage to succeed this time? And by succeed we mean generate a selloff that takes out that March 2021 corrective low and drives gold, let’s say, down to its 200-wk. avg., around $1640 now, a momentum level it hasn’t seen in two and a half years.

MSA Turned Bearish A Few Months Off 2011 Peak
Looking back at the last major gold peak: MSA turned major long-term bearish on gold in early 2012 a few months off the 2011 price peak. Gold labored up and down in two-hundred Dollar swings for the next year-plus but was never able to return even near its 2011 price peak (unlike the current market). During that time we had negative comments from many subscribers who thought gold was merely congesting before another upside leg: in other words that we were wrong in our negative outlook. We replied with a report on December 16th, 2012 titled:

“An open letter/explanation to “gold bugs.”

We argued that while the fundamentals seemed so convincing for a continued gold uptrend, the technicals said no.

“At the present time gold still looks to me to be poised for one of those pullbacks that shakes teeth. Not just a quick couple $hundred off the $1900+ high of 2011, like we have already seen, which has been followed by the past year’s comfy range. But something that upsets a bit more deeply, and actually “corrects” to some levels and long term averages that make some sense.”

MSA Turned Bullish Again Near Major Bottom Feb. 2016
(MSA did not turn bullish again until February 2016, two months after gold made its bear low just above $1050.) Gold had produced a 50% correction/bear trend!

Well, now the sentiment is clearly the other way. Either gold bears (as well as gold bulls) are fairly certain gold will and must collapse, or at least they wouldn’t be surprised by it. The opposite of the forever-long sentiment that prevailed back in 2012. MSA isn’t a contrarian based report, because sometimes the mob is right, or at least right enough to get much of what they want—before they get killed. But what we do offer for their consideration is the timing on the clocks.

Monthly Momentum
Monthly momentum peaked in early March and began its drop that month. Now four bars have been involved in the downside swing on monthly momentum (including the high bar). If you study monthly momentum going way back, you’ll to see what’s shown here over and over again. Monthly momentum will generate swings that tend to have a maximum clock: four or five bars in a given direction and then a turn the other way (or sometimes fewer bars). Not all swings in momentum will generate significant price moves, but they will at least cause halts or minor reversals in the prior price direction. Or meaningful turns in price, especially if structure is involved. 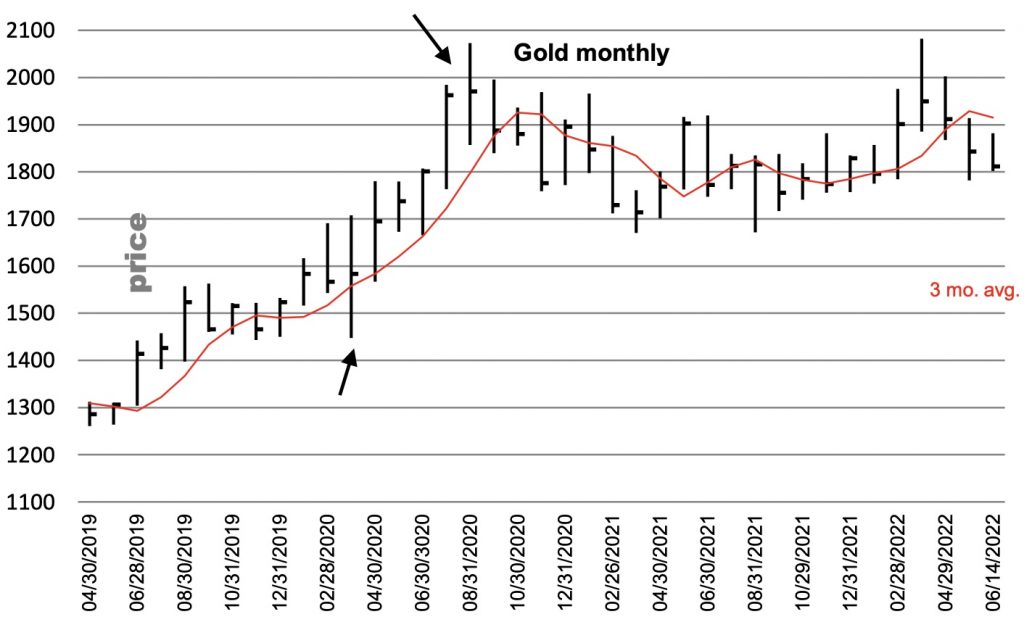 We note some of the prior up-and downswings in momentum and their duration. The first example is the explosive advance from the March 2020 sell everything panic low to the August 2020 peak (black arrows). Only a bit of that move on the momentum chart persisted into early August, so actually a five-bar swing in monthly momentum and that surge had done its thing. It was followed by a five-bar downswing into November 2020, etc. You can do the counting, but whether a move is dramatic for price in a given direction or only mild, the clock tends to run its course in four to five bars inclusive. 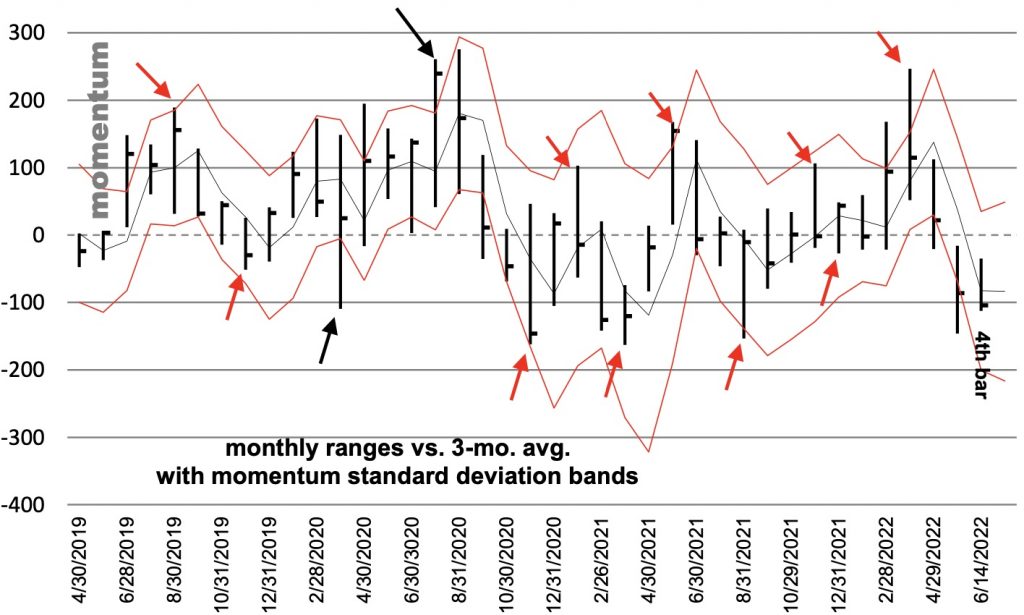 This suggests that whatever the bears have in mind, they need to really begin to show it, probably in this monthly bar and certainly by July, otherwise the monthly momentum clock will run out. And this will have been just another selloff within the range of action since mid-2020.

Weekly Momentum
One can apply the same clock to weekly momentum swings.

Again, four or five bars in a given direction and it’s probably best at that point to expect opposite movement for several bars the other way. It doesn’t always translate into significant price movement when momentum begins to swing the other way, but it will usually at least halt the prior price direction for some bars. 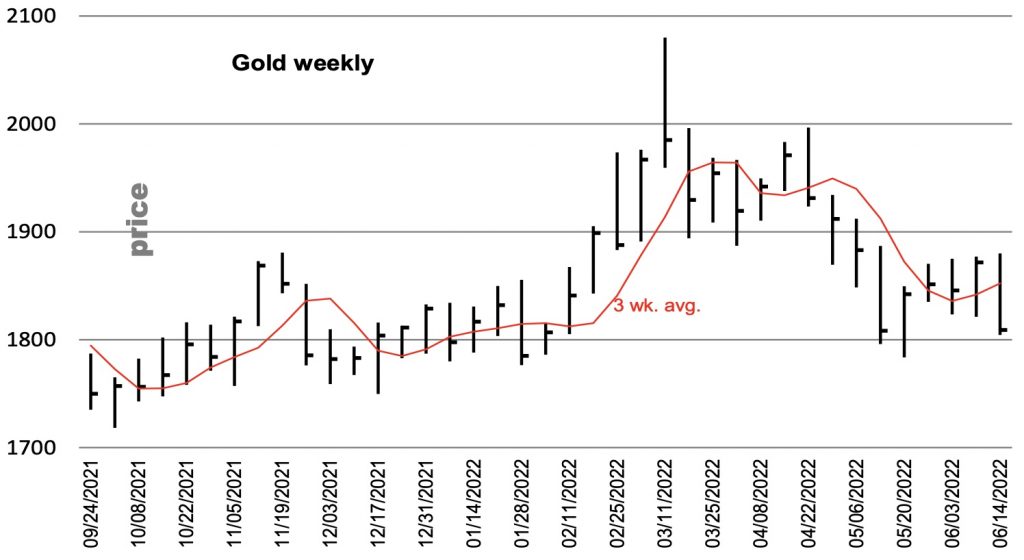 Consider if weekly momentum, now into its third bar (inclusive) off a recent high, persists perhaps for another bar or so— a fourth or fifth bar—and still hasn’t produced sharp downside. Then an upturn in weekly momentum readings will put a stall on the downside in monthly momentum action (prior page), which in a few weeks will be entering its fifth downside bar. Not a good time for the bears to see weekly momentum stabilize and turn up, and hence waste time in the then very aged monthly oscillator decline. 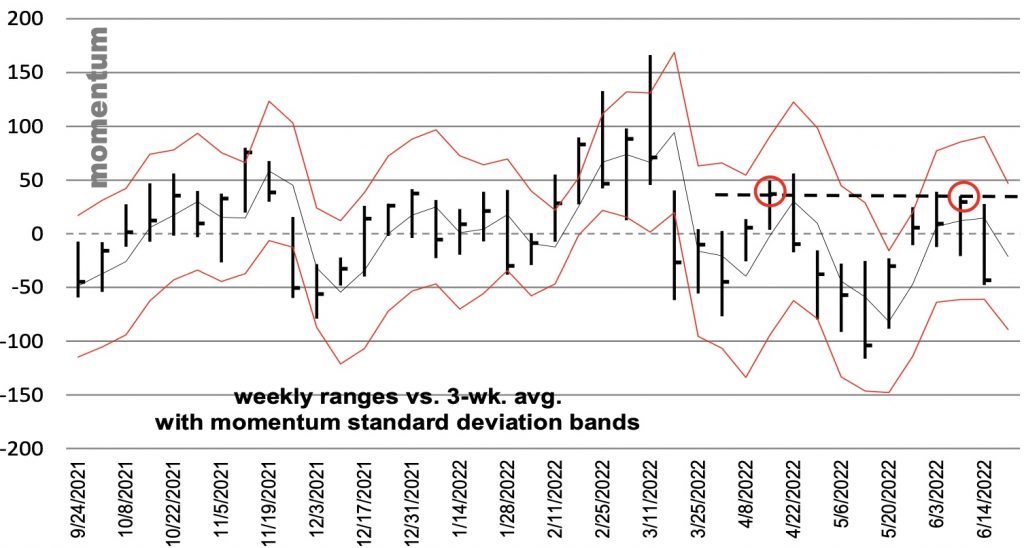 What we see, therefore, is that, yes, both oscillators are in decline, but in another week or so this weekly oscillator will be aged and will need to have shown its stuff—whether demonstrable price downside or not. And at that point as we get into month five on monthly momentum, it too must show its stuff … or not.

Therefore, we give the bears an open window to generate their much-anticipated collapse in gold (widely anticipated market events usually do not occur, but we’ll see).

So if you’re a positioned bear, pay attention to the clock. Give it another week or so and you’d better be seeing sharp downside not just another downswing either side of the middle of the couple year price range. And in the meantime watch the overhead line on weekly momentum (defined by two peak weekly closing readings) and don’t at any point let the action clear that structure. So gold bear, you only have about 3.5% risk being short (to break out over that buy structure) so make it happen on the downside this time around. Or not.

If we had to provide you, Gold Bear, with a number that you probably need to see achieved soon—to even begin to try to get this decline going the way you think it must go—then drive gold (probably this week) down to $1767. That’s only about 2% below the current market. Right now you’re between numbers.