On the heels of Wednesday’s propaganda being spewed out of the Federal Reserve, today multi-billionaire Hugo Salinas Price stunned market observers across the world by saying this catalyst has the gold price headed thousands of dollars higher.

This Will Rock Global Markets
September 21 (King World News) – Multi-billionaire Hugo Salinas Price:  The Chinese have announced that they have perfected a scheme, to be launched formally in the market by the end of the year, by means of which exporters of oil to China will accept the Chinese currency, the Yuan, in payment for the oil; for this deal, the Chinese have added an incentive: the Yuan received by the oil exporters will be exchangeable for gold. This gold will be “sourced” i.e. “purchased” outside of China, for the oil exporters.

Thus, the oil exporters’ Yuan will be offered in payment to the so-called “Bullion Banks” in London, who will provide the gold in exchange for Yuan. We know that this much is part of the plan...

Multi-billionaire Hugo Salinas Price continues:  What follows is my understanding of the situation:

The Bullion Banks are the financial entities that control the price of gold by selling futures contracts, i.e. “paper gold”, that promise to provide gold at a certain price, to speculators who buy the contracts, and who only wish to make a profit in Dollars on their bets that the price of gold will rise, and do not intend to take delivery of physical gold.

Gamblers In The Casino
Sometimes the speculators win some Dollars, but the vast majority are perpetual losers, because the Bullion Banks can move the price down at any moment and clear out the speculators who were “long” gold. This game has been going on for years and years.

I suppose that the Bullion Banks are not going to want to accept Yuan, in exchange for the delivery of physical gold. They will first convert their Yuan into Dollars, and the only likely provider of Dollars will have to be the Bank of China, and which, by the way, in any case desires to reduce its Dollar holdings. Thus the Bullion Banks will offer Dollars for gold.

This operation kills two birds with one stone: the oil exporters get their gold from London, and China reduces its dollar holdings, which they wish to do.

As I see it, here is where the fun begins.

However, as the Chinese scheme comes into operation, this situation will change: a new purchaser of large amounts of physical gold has come upon the scene. A very upsetting development for the Bullion Banks, never before seen by any of the managers of those banks!

Secondly, the amount of oil that goes to China is enormous; China is the largest importer of oil in the world, eight million barrels a day. Saudi Arabia sells about one million barrels a day to China, for Dollars. If only Saudi Arabia decides to take Yuan and gold for those Yuan, we are talking about one million times $50 Dollars per barrel = $50 million Dollars a day; at $1315 Dollars per ounce, that comes to 38,023 ounces of gold – 1.183 tonnes – which Saudi would take off the gold market every day. Millions of barrels of oil will have to balance in value against a very limited amount of gold available.

Over 1,000 Tonnes Of Gold To Exit London Each Year
1.183 tonnes a day means the Saudi will be taking 431.8 tonnes of gold off the market every year, and they are not the only oil exporters that China is wooing; other oil exporters accepting Yuan payment for conversion into gold, might very easily increase the departure from London of 1,000 tonnes or more of physical gold, every year, whose destination will be Hong Kong or Shanghai, in addition to the gold London has been providing normally.

Inevitably, the very first operation carried out under the Chinese scheme will produce a noticeable rise in the price of gold. When the Yuan belonging to the oil exporters is offered to the Bullion Banks in London, they will convert the Yuan into Dollars, and their bid for gold will have to rise immediately, and with it, the Yuan price of gold at the prevailing exchange rate.

A higher and rising Yuan and Dollar price of gold, means a smaller and diminishing quantity of gold is exchanged for the oil provided by the oil exporters.

The Gold Price Will Skyrocket
To balance the mass of oil received by China, against a limited amount of available gold in London, it will be necessary for gold to skyrocket upward in Yuan terms, and necessarily, in Dollar terms as well.

In effect, the Yuan will suffer a tremendous devaluation against gold, and so will the Dollar. I cannot imagine at what price the gold/oil trade will finally stabilize, but I think it will have to be at many thousands of dollars per ounce.

Perhaps the Chinese government sees the Yuan devaluation as favorable for China. I have no opinion on that matter. As for a huge devaluation of the Dollar against gold – I leave the consequences to your imagination.

Will China actually carry through with this “Oil-for Yuan-for Gold” scheme? We shall have to wait and see. 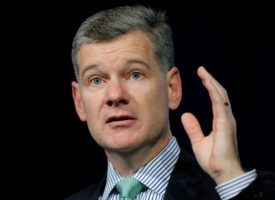 Yusko – “I’m telling you right now. We are going to have a crash and it is going to be terrific.”