Today a QE bazooka was unleashed, but look at what else is happening around the world.

QE Bazooka
April 20 (King World News) – Peter Boockvar:  The BoJ brought out its QE bazooka again with the market testing the upper end of its 10 yr YCC range of .25%. They said they’ll buy an unlimited number of JGB’s thru Monday. Notwithstanding this, the 10 yr yield closed at .253%. The yen though is on the cusp of breaking its 13 day losing streak and is up .8% after falling by 5.6% over this time frame as it is very oversold in the short term. Year to date its down 10.7% and by 16% y/o/y. Again, if the BoJ if forced to widen their YCC band, we will see global bond reverberations. The BoJ meets next week. Should be interesting.

Turning to corporate credit, keep a close eye on the CCC category of high yield, the lowest rung. The yield to worst on Thursday closed above 10% for the first time since early November 2020 but has backed off a few bps to 9.93% as of yesterday. 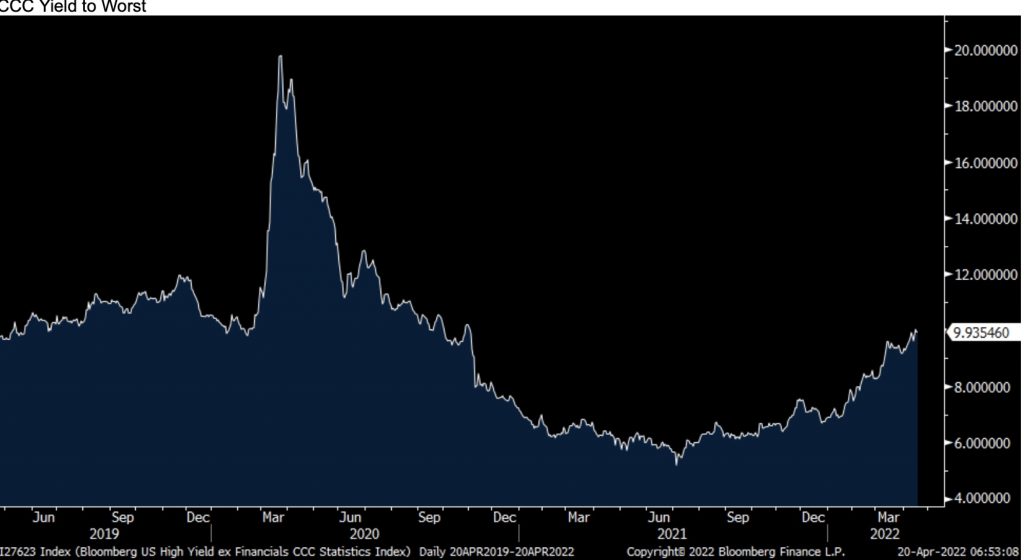 The spread to Treasuries is retesting the mid March wides when it got to 704 bps. It closed yesterday at 688 bps, 6 bps tighter from Monday as markets of course rallied.

Rate Hikes
This gets to the debate on what has been priced in. Yes, we’ve priced in a bunch of rate hikes this year and next with the May 2023 fed funds futures already yielding 3%. But, I argue, we have not yet priced much in of the economic impact of this rapid rate increase. Some areas of the stock market certainly have to an extent like anything housing related, the area most sensitive to rates and also auto’s, the other most sensitive group. Home Depot is down 26% from its December high and ITB (the home builder ETF) is off by 29%. GM is down 36% and Ford by the same amount. But not really past this. One reason certainly is because we don’t really know yet as this is all a process and not an event.

In response to a question from Sara Eisen yesterday on CNBC about the Fed balance sheet and where it will end up in terms of size, $6T or something else, non voting Atlanta Fed president Raphael Bostic didn’t really give a specific answer because he doesn’t know. He basically said they’ll know it when they see it which is another way of saying, they’ll stop when the market tells them to as it did in 2019…

Meanwhile In Europe
Shifting to the ECB, Martins Kazaks who tends to be a hawk said in a Bloomberg interview today that “A rate increase in July is possible, and I have no reason to disagree with what markets are pricing for the 2nd half of the year.” While they are still doing QE, albeit at a shrinking pace, he said “We are on a solid path of policy normalization.” Maybe this possibility, and a reminder to the market, that the ECB really does want to deal with inflation, is why European yields are falling today after the recent jump. The euro is rallying too. 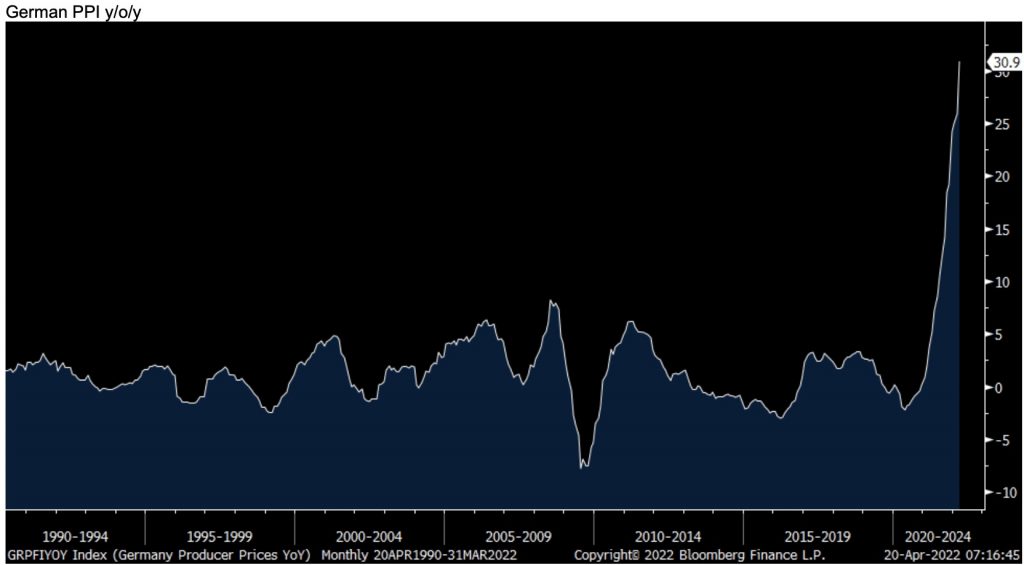 Well, Mario Draghi certainly got the inflation he so wanted. Energy certainly was a big part of this but ex it, PPI still rose 2.3% m/o/m and by 14% y/o/y. The German 10 yr breakeven has risen by 100 bps since the Russian invasion to 2.93%.

Real Estate
A now 5.20% average 30 yr mortgage rate according to the MBA for the week ended April 15th. 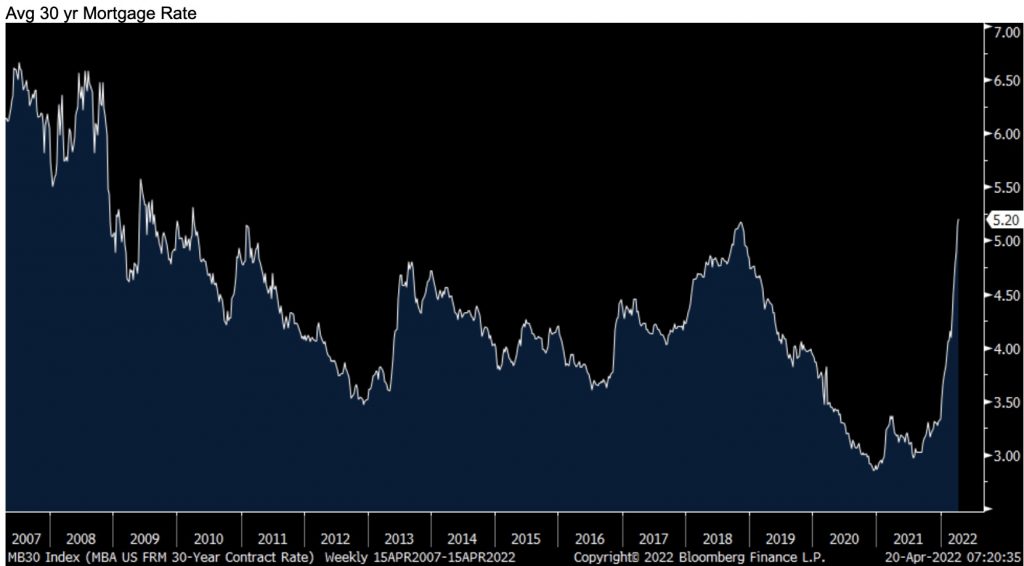 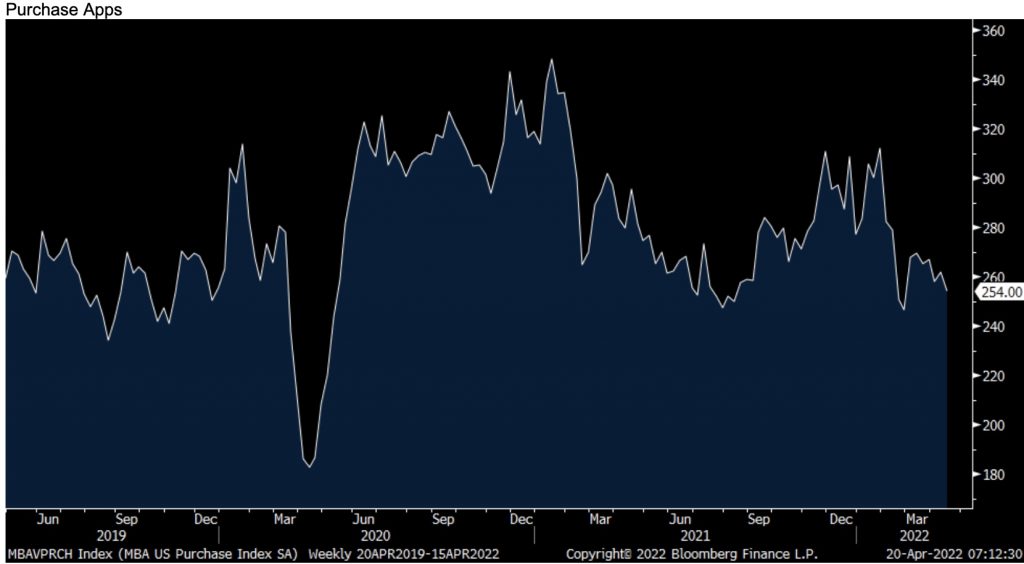 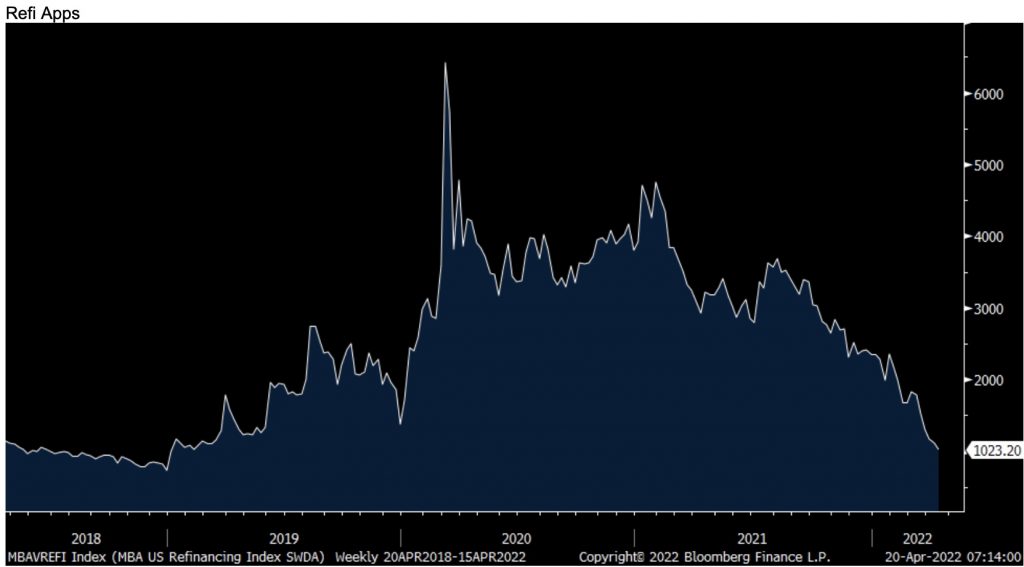 Existing home sales in March totaled 5.77mm which was as expected but February was revised down by about 100k to 5.93mm. 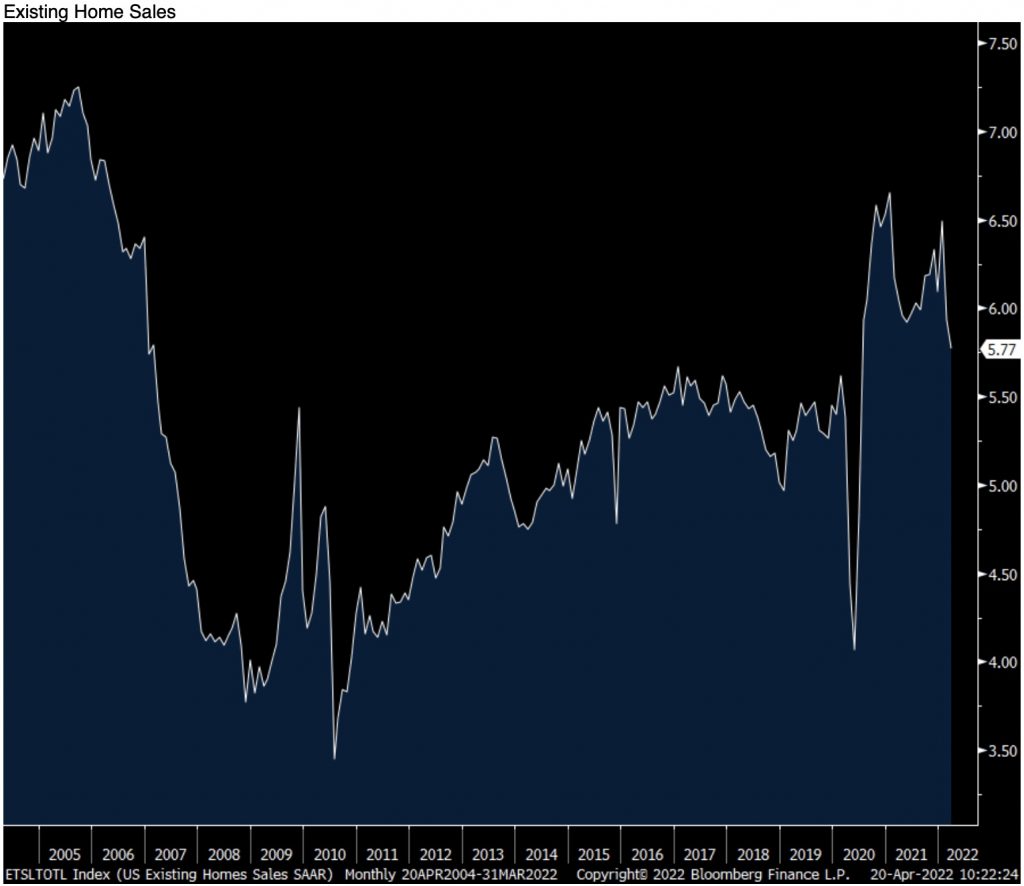 This is somewhat dated data though as this measures closings and the contracts were likely signed in the months to quarters prior and thus only partly captured the sharp rise in mortgage rates. If you signed a deal last November or December and locked in a rate, you’re lucky and likely secured a 30 yr for about 3.25%. If however you signed a contract in February 2022 for a 30 day close in March, you likely are paying 4%. From here, one has to of course pay more than 5%. For those who didn’t need a mortgage, the NAR said:

“cash sales made up a larger fraction of transactions, climbing to the highest since 2014”

…with investors, including the institutional kind continue to make their presence felt. All cash buyers totaled 28% of transactions.

Months’ supply did tick up to 2 months from 1.7 but that is still just 1/3 of what is considered normal. 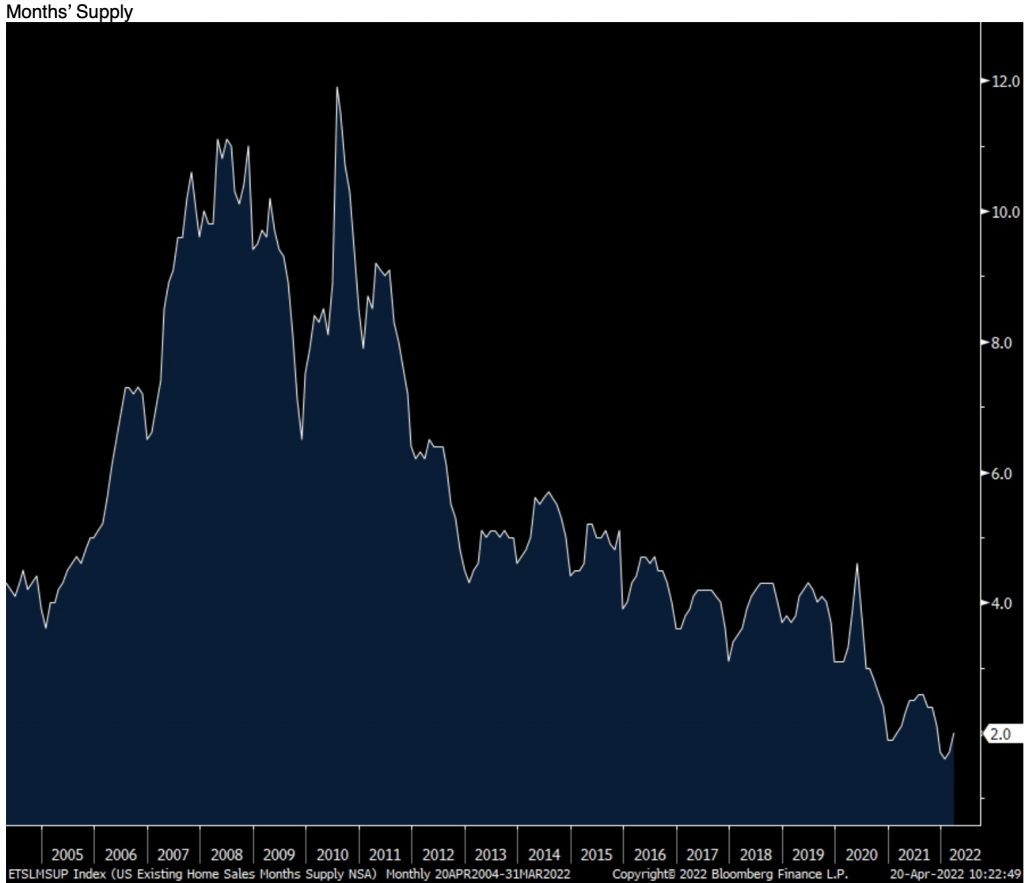 Home Prices Up 15% Year Over Year 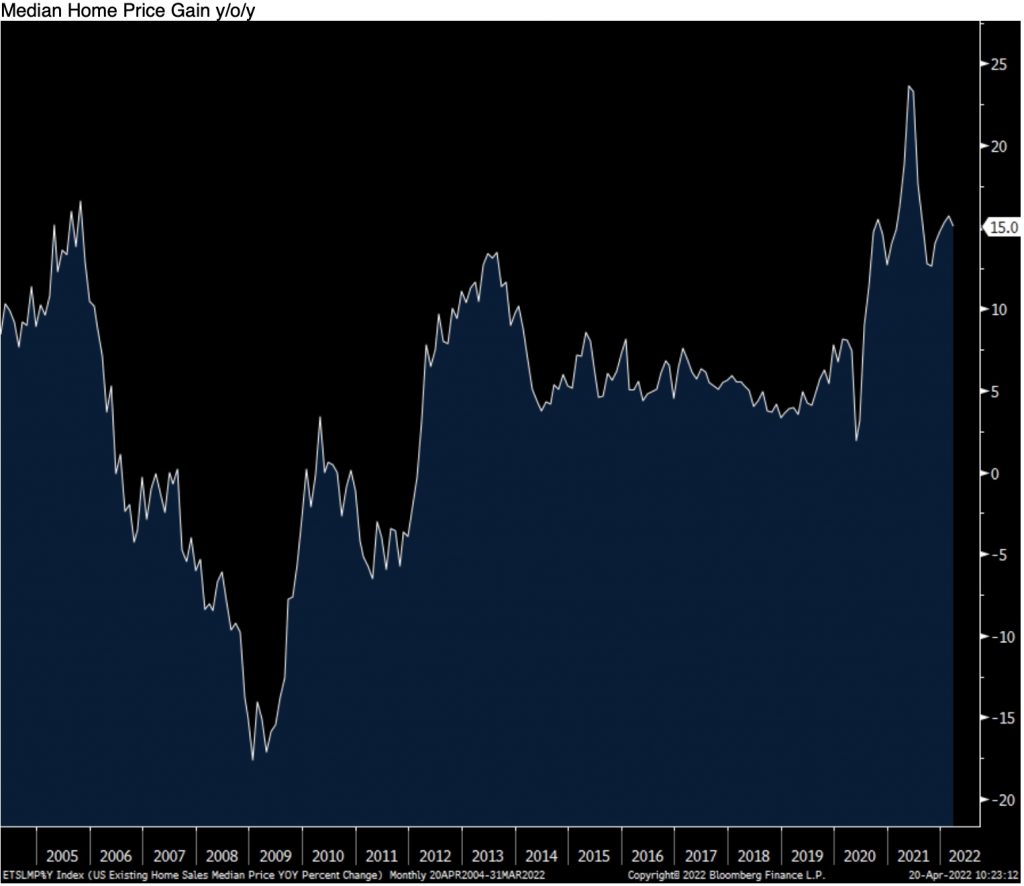 Bottom Line
Bottom line, the pace of closings in March was the lowest since June 2020. For sure we can blame a lack of available inventory but we can also pin the slowdown on the growing affordability challenge where the former is definitely influencing the latter, in addition to the spike in mortgage rates. The NAR said:

“The housing market is starting to feel the impact of sharply rising mortgage rates and higher inflation taking a hit on purchasing power.”

They expect with rising mortgage rates that the number of home transactions in 2022 will contract by 10% while they still expect a 5% rise in home prices. That is obviously a sharp deceleration in the rate of home price gains but a comedown the market desperately needs, especially for the first time buyer…

The NAR also had a warning for sellers who think it’s still 2021, “sellers should not expect the easy-profit gains and should look for multiple offers to fade as demand continues to subside.” As for demand, some are backing away but others are trying to buy before rates move up further. “It appears first time homebuyers are still looking to lock in at current mortgage rates before they inevitably increase.”