With the Dow and Nasdaq on a historic tear recently, we have just witnessed an all-time record number of Hindenburg Omen warning signs!

Dow’s Dire Warnings
From Jason Goepfert at SentimenTrader:  “Over the past 30 days, there have been 8 Hindenburg Omen warning signs in the Dow Industrials. Despite the silly name, the signal is a serious reflection on the internal performance of stocks within an index. On the Dow, this is the largest cluster of warning signs since October 2000…

Jason Goepfert at SentimenTrader continues:  “The Dow keeps chugging along, oblivious to the other major U.S. stock indexes, and we can all thank the good folks at Boeing for the performance. That single stock has accounted for 206 of the Dow’s 291 point gain over the past week.

We took a look at a few metrics showing how notable Boeing’s run has been lately on the premium Twitter feed. Suffice it to say, its recent move is on a level the stock has rarely enjoyed, and investors in the Dow have to rely on that historic move stretching even further.

The fact that a single stock has had such an impact means that the other stocks have been treading water at best. A few have been slipping, enough to trigger another Hindenburg Omen on the Dow on Friday. That’s the 8th signal in the past 30 days. 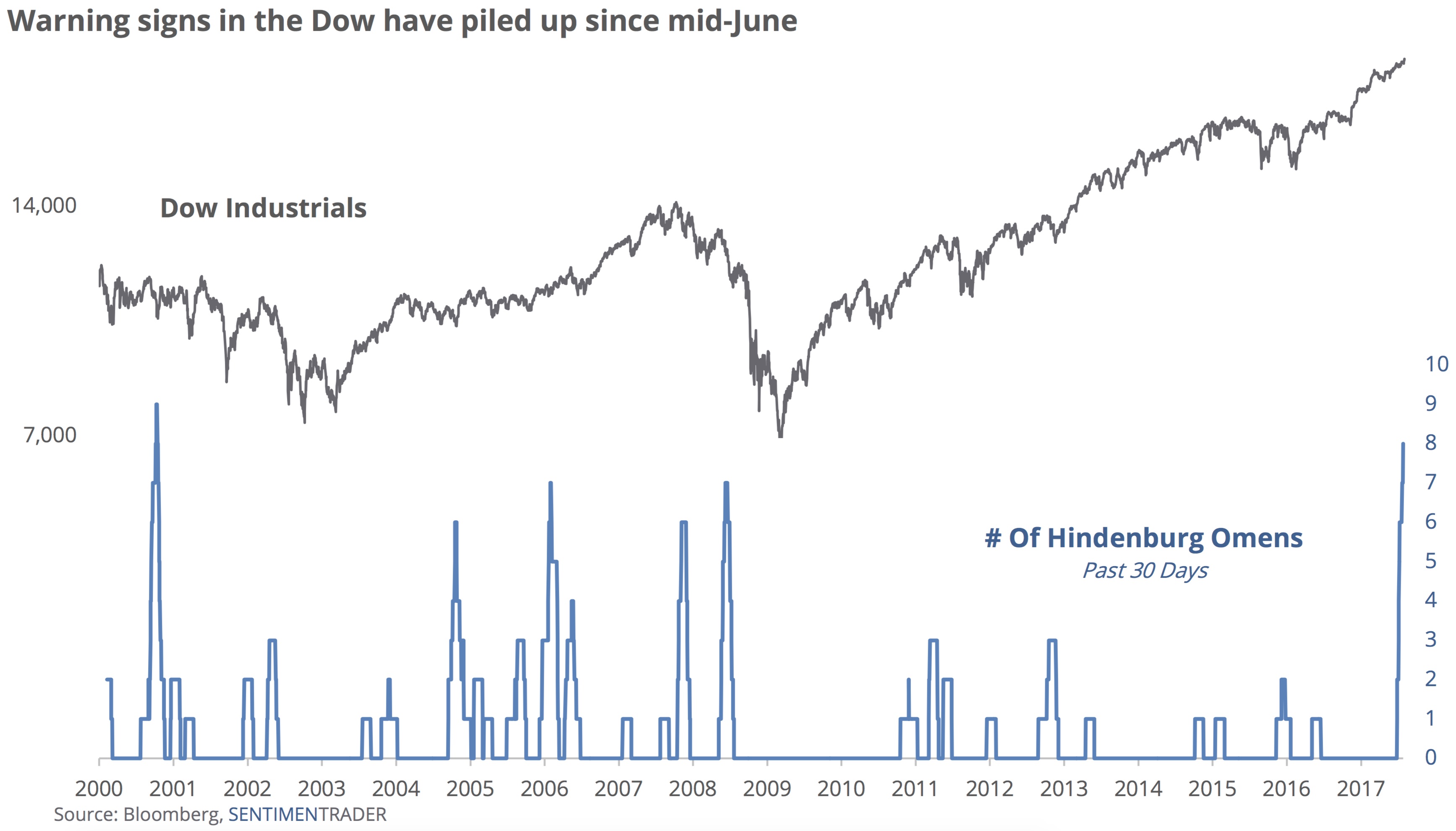 Recall that the Hindenburg triggers when there is a split within an index – the price itself has been doing well, but breadth momentum is slowing and an abnormally large percentage of stocks are hitting 52-week lows given how well the index is performing.

We can see above just how rare it is to see so many of these warning signs over a 30-day period. The only cluster that matched what we’re seeing now was in early October 2000, preceding a choppy market that saw quick, drastic declines. It got close in January 2006 (not bad, but the Dow went nowhere for six months) and June 2008 (oof, that was ugly).

All-Time Record # Of Hindenburg Warnings!
… Among sectors, by far the most signals have been triggering in Consumer Discretionary.

That sector has seen more than 30 signals in the past six months, far exceeding not only any other time since 1990 but also any other sector…The charts and commentary above are from SentimenTrader. To try a free 14-day trial of the internationally acclaimed work that Jason Goepfert produces at SentimenTrader simply CLICK HERE.