Here is an important update from Alasdair Macleod on gold’s December turning point. 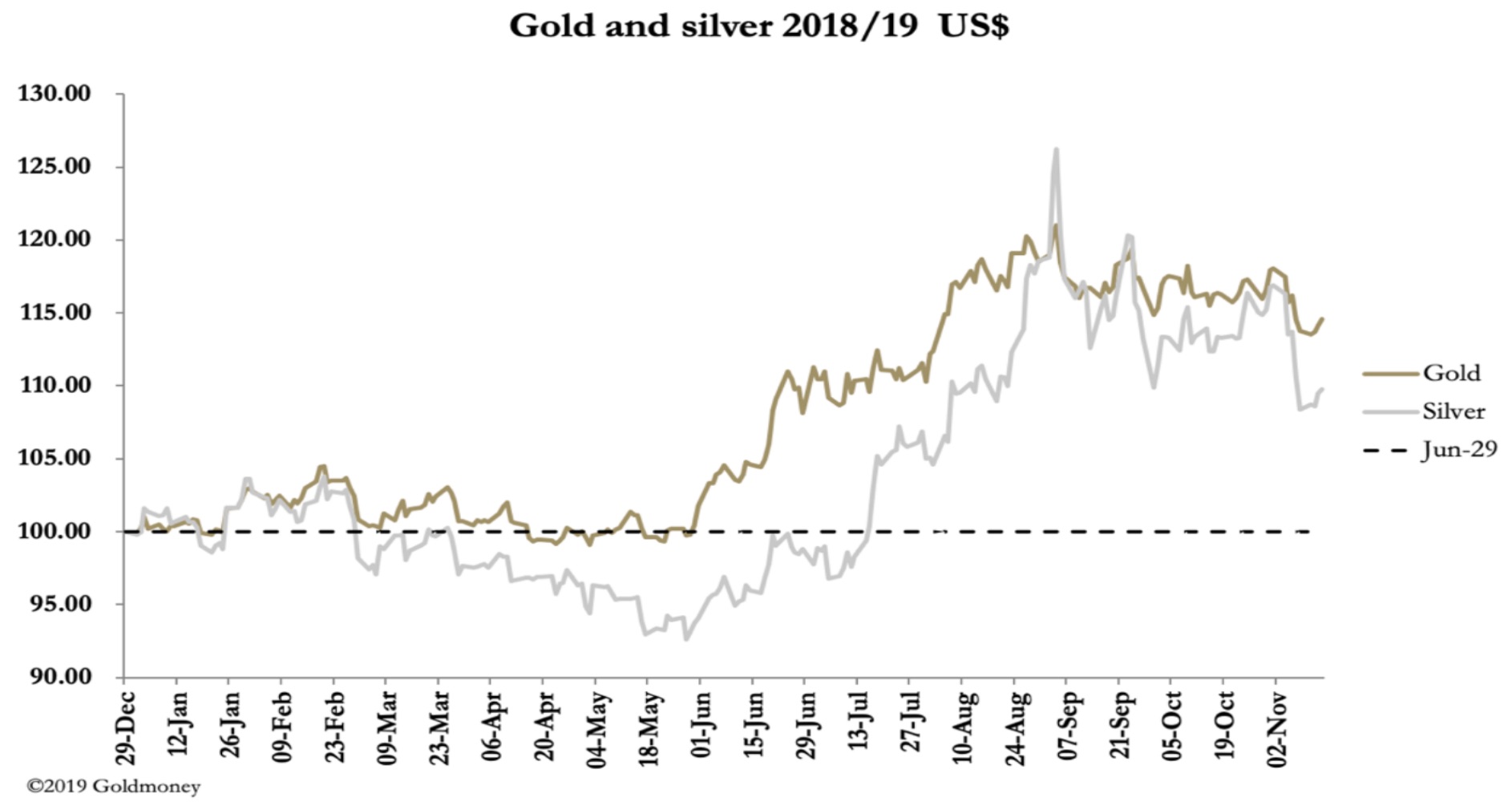 GOLD: December Turning Point?
November 15 (King World News) – Alasdair Macleod:  “Gold and silver stabilised this week, consolidating the falls of the previous week. Gold rose $7 from last Friday’s close to trade at $1466 in early morning European trade, while silver was up four cents over the same time period at $16.90. Silver seemed to have a firmer underlying tone compared with gold, and this can be explained by gold appearing to be more overbought than silver. This is reflected in our next chart, which is of gold’s open interest on Comex.

Open interest is still at record levels, despite the fall in the gold price, a combination which is highly unusual. While the chart shows that the gold price does not have to track open interest faithfully, they do broadly correlate. That accepted, the two previous divergences last April and last June were followed by rising prices for gold. But in both cases, the rise in open interest appeared to lead the price higher.

This time, open interest is rising while the price is falling. This divergence makes no sense in the normal course of trading, because a fall in price almost always reflects the speculative longs being squeezed to close with their stops being taken out. In other words, open interest declines. There must be a major battle going on between large speculators and the bullion banks operating as market makers.

This battle is likely to intensify in the coming weeks, with an important bearish factor at play. The Comex December contract is rolling off the board, and as of yesterday’s close, preliminary figures show there are 357,575 outstanding. These will be closed by the end of the month, stood for delivery, or rolled over into the next active contract, which is February. This always presents an opportunity for the bullion banks to squeeze the bulls into closing, and as the roll-off proceeds, the pressure to sell increases. With an average of over 30,000 contracts a day needing to be closed this is an enormous headwind against the price.

This tells us two things. First, over the rest of the month the price is likely to fall further, and secondly, any short-term bullish sentiment is likely to evaporate. It points to the next bull run, if it is to materialise, being delayed into early to mid-December.

Our next chart show this is not unusual, with the arrows showing past examples of a falling market reversing into a strong rise at a December turning point. 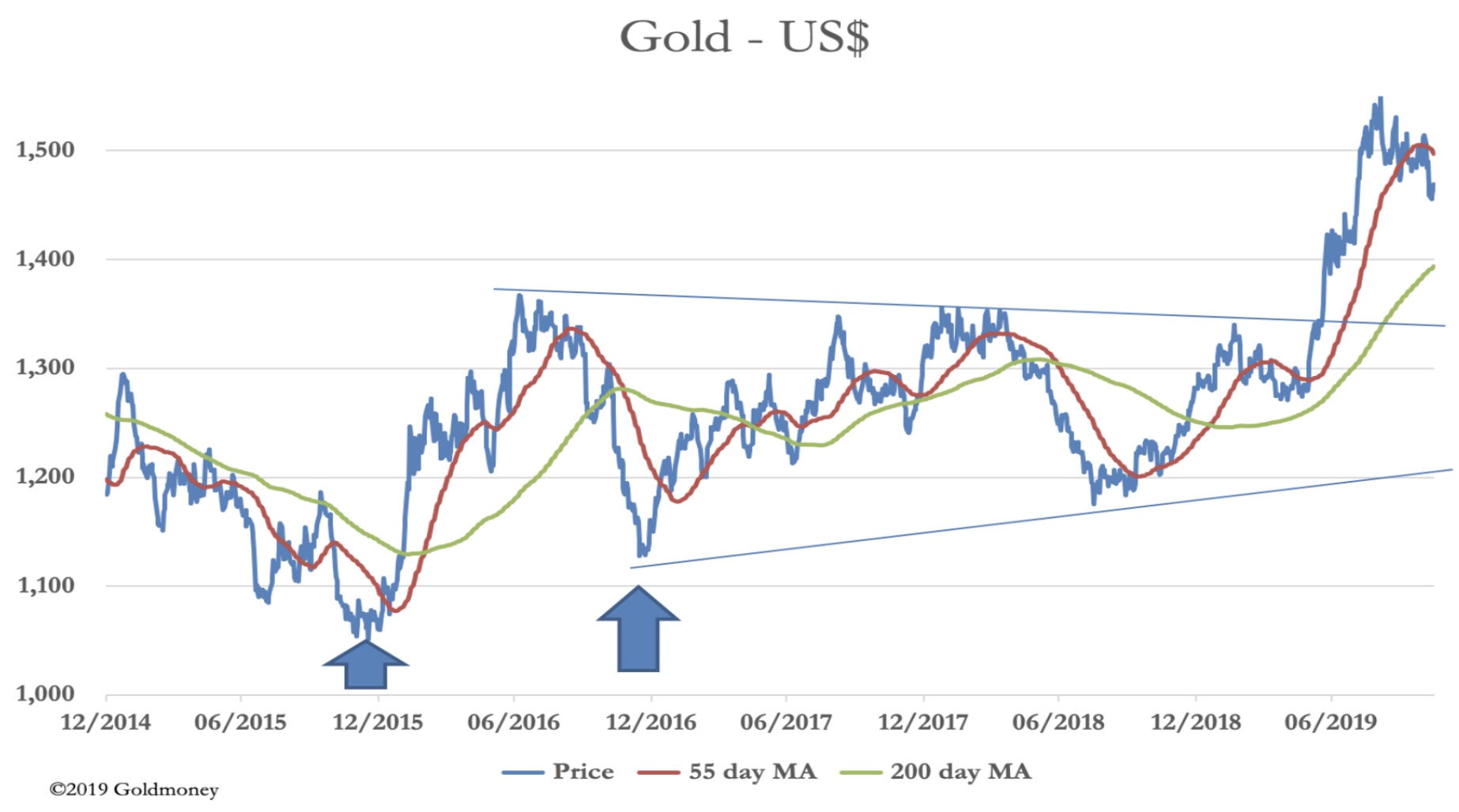 The reason these turning points occur in December can be partly explained by year-end book squaring, when market makers come under pressure to show a balanced book or at least a moderate, profitable position. All market makers are in this position, and they take the same action without the need to collude. This being the case, there is a reasonable possibility that the gold price will only advance from lower price levels, possibly close to the 200-day moving average currently at $1400, after the current active contract expires at the end of the month. The reason it may be delayed into the middle of December is the Fed will take a decision on interest rates at that time.”

Eric King:  “Ivan, you just announced a second release of high grade samples from your Curibaya project — up to a jaw-dropping 8 kilos of silver, 17 grams of gold, and 7% copper. These are spectacular grades in one of Peru’s most prolific mining belts. What do you make of these continuous high grade results?”

Ivan Bebek: “Eric, the metal endowment of multi kilo silver, half ounce gold, and multi percent copper is exceptional. In my 22 years of being in the business and looking at numerous projects I can’t recall the start of a project with so much widespread high grade. This is the early days of a project, so it’s difficult for us to tell anyone what it means yet other than the property has had extraordinary results and the right address – a major mining belt with some of Peru’s largest mines and it has significant amounts of high grade everywhere.”…

Eric King:  “Many people have been absolutely shocked by both press releases of high grade results. What is your former Newmont technical team saying about this project?”

Ivan Bebek:  “Eric, we knew there was high grade on the property, based on historical sampling, but they did not know the extent of it and they did not know if it could be expanded as it has over 6 square kilometers. Everyone is shocked by the wide spread grades, as they represent a strong mineralized system that can produce incredible grades on a world class mining trend. The project will become increasingly more exciting as we advance it through drill targeting, and lots of news is expected over the next few months.”

Eric King:  “Ivan, this Curibaya project has come out of nowhere, but the major focus of Auryn has been the Sombrero Project, a tier one copper-gold swing in Peru that has drawn strong analogies to Las Bambas Mine, a gross value $60 billion ore body — the 10th largest copper mine in the world. What’s new at Sombrero and when will you get drill permits?”

Ivan Bebek:  “Sombrero is a major swing for us. Our thesis is that we extended the Las Bambas mining belt to the west by 200 kilometers. This belt has 6 world class mines. As first movers we have staked 130,000 hectares of highly prospective ground that we sampled and it represents multiple opportunities for major discoveries. We expect a major permitting advancement in November and anticipate drill permits in Q1 of 2020, which is right around the corner.”

Eric King: Looking at 2020, what are some of the major catalysts?”

Ivan Bebek:  “Eric, we spent 2018/19 acquiring, identifying, and advancing tier 1 discovery opportunities in Peru at our Sombrero, and now Curibaya, projects. 2020 will be led by continuous discovery drilling amongst both projects sequentially through the year and into the following year. We also believe a significant move in commodity prices will compliment any discoveries we make. The expensive time of waiting for a drill permit will soon be behind us and we will be in a position to constantly be drilling potential major discoveries throughout 2020.” Auryn Resources, symbol AUG on the New York Stock Exchange and in Canada. To read the press release of the remarkable results CLICK HERE.