On the heels of the Dow hitting a new all-time high, one of the greats in the business just released this fantastic piece which gives a huge clue as to where the prices of gold, silver, commodities and the high-quality mining shares are headed.

Commodities!
By Jeffrey Saut, Chief Investment Strategist at Raymond James
August 1 (King World News) – So while I remain on the West Coast speaking at events for our financial advisors, and seeing portfolio managers, I had the privilege of meeting the legendary Leon Tuey for lunch, who was just nominated to the honorary list of technical analysts of Canada…

Subsequently, I received numerous emails regarding our strategy report yesterday discussing the potential sea change regarding commodities, and about our vent toward “stuff stocks,” a phrase Maria Bartiromo attributed to me back in 2002. Interestingly, after our lunch Leon emailed me this:

Since early last year, I’ve been bullish of commodities and commodity-related issues (see February 28, 2016 report, “Commodities – Early Signs of Bottoming”).  Technically, they were thoroughly washed out and momentum improved.  Moreover, the monetary easing of the past eight plus years is finally having a positive impact on the world’s economies and a synchronized recovery had begun.

Last year, helped by the spectacular rally in commodities, the Canadian market surged.  Consequently, the market got grossly overbought and not surprisingly, a correction ensued which caused much consternation and tribulation.  In my May 30, 2017 report, “Canadian Market”, however, investors were advised to maintain a bullish posture and concluded that ” . . . the recent pause is a normal reaction from a short-term overbought condition which is normal and healthy.  Remember, the Canadian market, like Australia, Brazil, and Chile, are resource-based.  They are known as a late-cycle market.  In other words, they perform the best in the back half of the recovery as the economic recovery accelerates.  Despite the gains already achieved, this great bull market still has a long ways to go in terms of time and distance. Hence, further weakness should be viewed as a buying opportunity and should not be feared.” 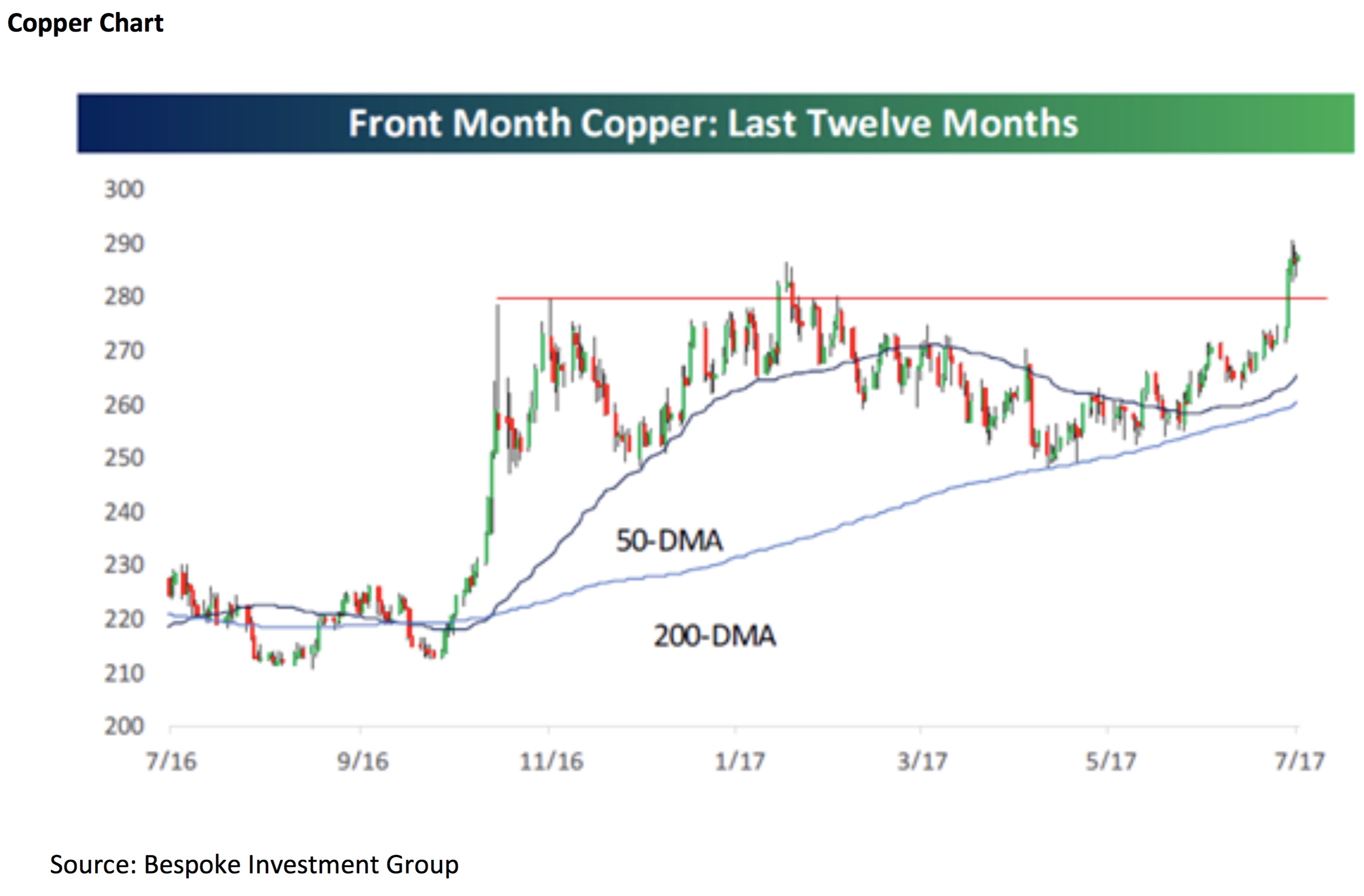 On Monday, July 17, 2017 the following note was sent which proved prescient.  This week, copper broke out of an impressive ‘head-and-shoulders” bottom (see chart above).  As copper is an industrial commodity, its bullish action is portending better economic times ahead. Other metals and aluminum have bottomed and are starting to head north.

FLASH
“Last year, commodities had a banner year as they all rallied spectacularly.  By November, however, the complex got grossly overbought and have been correcting.  Technical indications suggest, however, that in June, 2017, the complex got oversold and momentum improved.  Not surprisingly, most commodities have been rallying since.  [The] Action is consistent with the view that a synchronized global recovery is accelerating. Hence, accumulate energy, energy-related and the metals and mining issues.”

LEON TUEY
Another commodity showing signs of strength is Oil.  Despite the universal pessimism, Oil is poised to break out.  As mentioned in my previous reports, Oil will likely reach $70 – $80 in two or three years.  How will it get there without the economies improving? Finally, the Marine Transportation sector, dog of all dogs, clearly bottomed and has turned up.

In conclusion, after eight plus years of monetary easing, a synchronized recovery is firmly in place.  The bullish action of the various commodities and other late-cycle sectors lend support to my bullish view.  Also, investors must keep in mind that the stock market is a leading economic indicator.  The stock market’s relentless climb to record highs is portending better growth ahead and earnings momentum will accelerate.  It’s earnings momentum that really drives the market, not P/E.

Ignore the black headlines and refrain from joining the crowd.  Stay invested.  Remember, “It ain’t over until the fat lady sings” and the “fat lady” ain’t singing yet, far from it as this great bull market remains in the early stages of the second leg which is the longest and strongest as it is driven by improving economic conditions and accelerating earnings momentum.

Obviously, Andrew and I agree and would note if there is a window of downside vulnerability it should come on Friday’s employment report. But even so, we continue to think any selling will not gain much downside traction.

King World News note:  Gold & silver and the high-quality mining shares will follow commodities by surging to the upside.  Patience is all that is required at this point.

***ALSO JUST RELEASED: Another Warning Has Just Been Issued That Gold & Silver Prices Are Going To Skyrocket! CLICK HERE.