On the heels of Trump’s inauguration as the 45th president of the United States, today the man who has become legendary for his predictions on QE, historic moves in currencies, warned King World News he is inheriting a nation and a world that is now standing at the edge of a precipice.

World Shock Rapidly Approaching
Egon von Greyerz:  “The new US Administration has taken over with the conviction that they will “make America great again.” I really hope they will succeed because a strong US would be good for the world. Sadly, the odds of achieving that admirable objective are totally stacked against them. At the end of the next 4 years there is a risk that this Administration will be more hated than any government since Carter and probably even more hated than Carter.

The coming unhappiness with Trump and his team will not arise because of the actions they take. They will clearly do everything in their might to make America great again. But the probabilities are totally against them to achieve this goal. They are taking over power at a time when debt has grown exponentially since the 1970s. They are also assuming power of a country that has not achieved a proper budget surplus for well over half a century. Even worse, the US has not had a positive trade balance since the early 1970s. So here we have a country that has been living above its means for decades and has no real chance of changing this vicious cycle…

Egon von Greyerz continues:  “The Federal debt is at $20 trillion and has been growing at the rate of 9% per year for the last 40 odd years. The forecast for the next four years is that the growth of the debt will accelerate. Total US debt is over $70 trillion or over 3.5x GDP. But that is just a fraction of the US liabilities. Unfunded liabilities are over $200 trillion. And you can add to that to the real gross derivative positions of US banks, which most likely more than $500 trillion.

The success of a president in the US is closely linked to the performance of the stock market. Therefore, the best chance for a president to be loved by the American people and re-elected is for stocks to go up. P/Es on the S&P index are now at 70% above their historical mean – hardly a position from which it is likely to surge. Corporate borrowings have also surged since the Great Financial Crisis started. In 2006 US corporate debt was just over $2 trillion. Today it is more than 3x higher at $7 trillion! At the same time, cash as a percentage of corporate debt is declining and is now down to 27%. Within this massive increase in debt, there are major defaults looming in many areas like car loans, student loans and the fracking sector where potential write offs could be in the trillions of dollars.

US Corporate Debt Has Tripled Since 2006 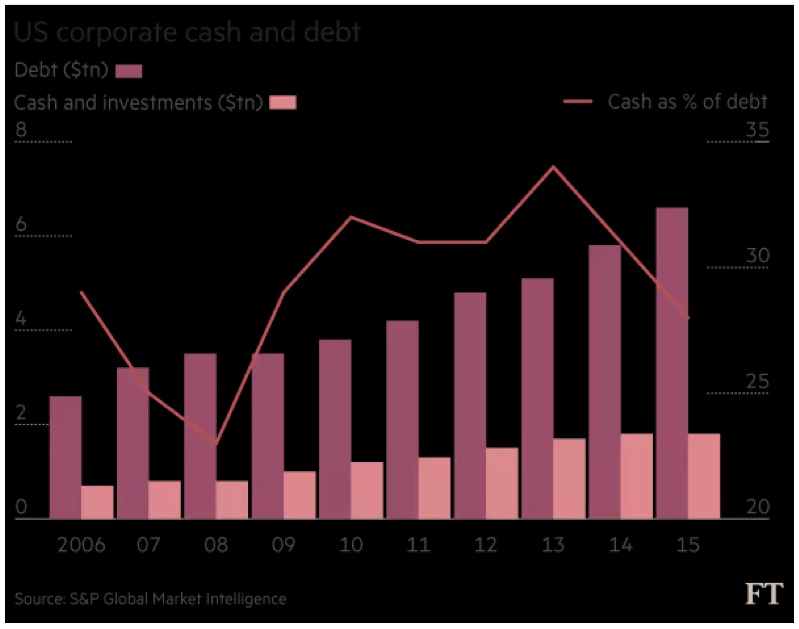 Another disaster which is guaranteed to happen in the US and the rest of the world is the coming pension crisis. Most people in the West have zero or a minimal pension. And even for the ones who have proper pension plans, they are greatly underfunded. 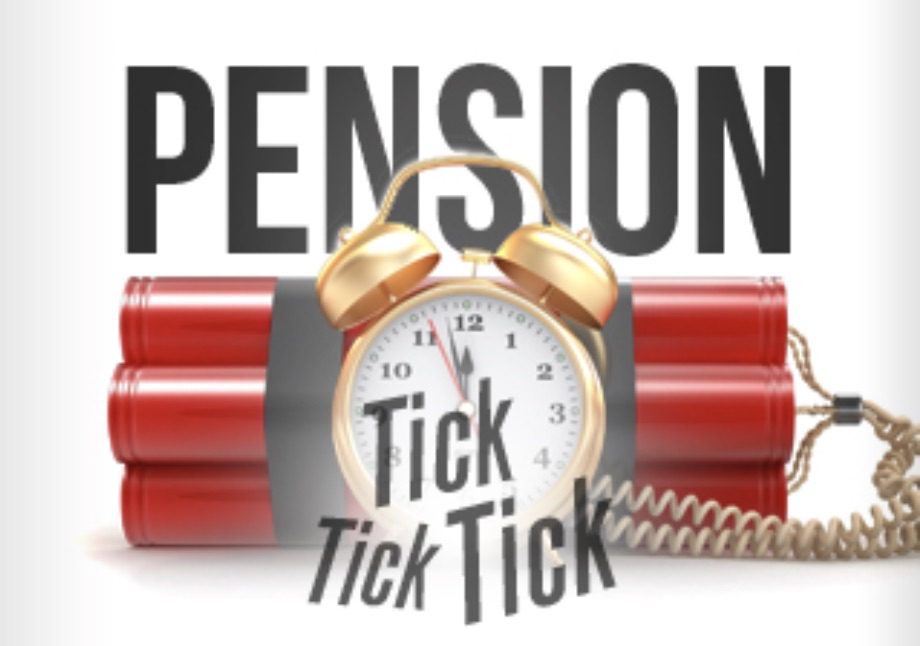 US State & Local Pensions Underfunded By $6 Trillion!
It is estimated that US state and local government pensions are underfunded to the extent of a mind-blowing $6 trillion. And this is after a long period of surging stocks and bonds. Imagine what will happen to these pensions when stocks and bonds collapse, which is very likely to happen in the next few years.

A Crisis Will Crush The Average Person
The table below shows that 80% of Americans aged 25-64 have zero or 1x earnings in pension savings. In the 55-64 year age group, 40% of the people have no pension savings and 60% have zero or 1x earnings. When the downturn hits the US, the majority of the US people will have no savings and no pension. This will create a crisis of unthinkable proportions. Many Americans will be without a home and without food since most people are only one pay check from bankruptcy.

The US Pension Crisis 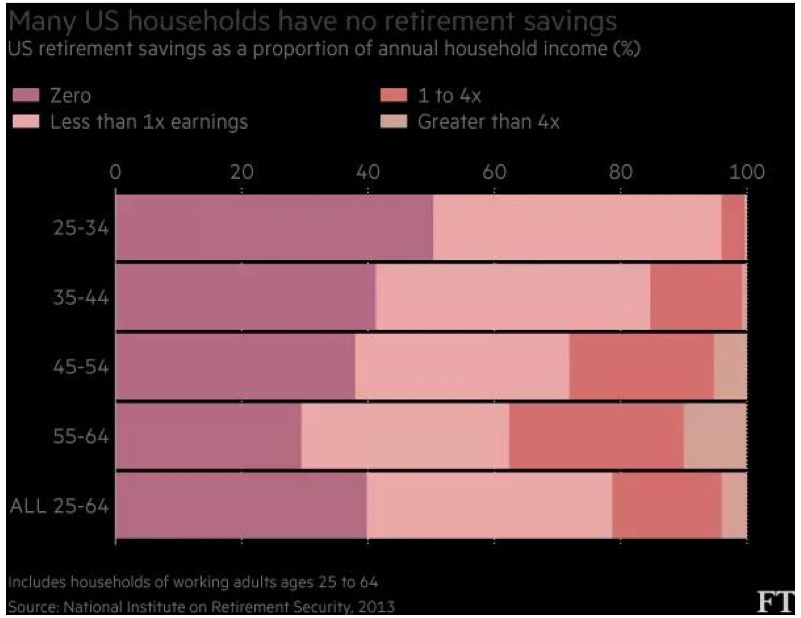 The coming financial crisis will of course lead to unlimited money printing, not just to help the American people but also to prop up a failing financial system as the defaults rise exponentially.

But this coming crisis will not be limited to the United States. Instead it will negatively impact the entire industrialized world. As the most indebted country in the world, the US will be hit very badly and the Trump Administration will be blamed. It will of course not be their fault, but the result of 100 years of mismanagement. Sadly though, the people in charge of the country will be blamed in spite of their efforts to save the situation.

Trump realizes that a weaker dollar would make American exports more competitive and also lead to US manufacturing coming back onshore rather than in China and Mexico. What he might not appreciate is that the strongest economies have the strongest currencies like Germany and Switzerland. A prosperous economy has always gone hand-in-hand with a strong currency. Countries that continually devalue are, without exception, weak and badly managed economies.

And this is exactly what has happened to the US since the dollar lost its gold backing. 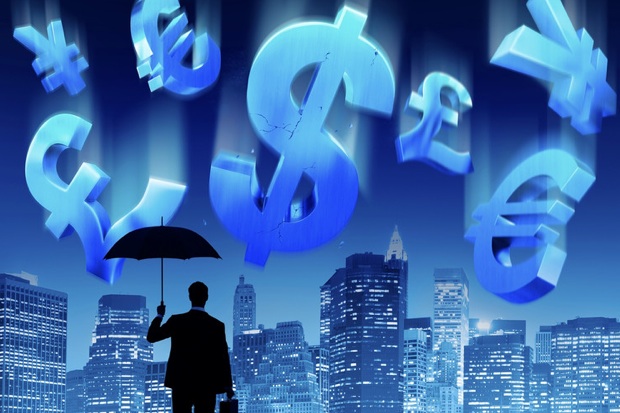 To measure currencies against each other never tells the whole story. Since all currencies are in a race to the bottom, the only correct way to measure the absolute performance of a currency is against a fixed value. Gold is the only money which has survived throughout history. And still gold is far from perfect, especially in recent times when the price has been kept down by a massive amount of paper gold issued by futures exchanges and banks. Once this paper gold market defaults, gold will go up by multiples of the current price.

So let’s have a look at how gold has performed against the only real or true money that has ever existed. The reason why gold is real money is because it is the only currency that nature has produced. Sadly, no money that man has produced has ever survived. The table below confirms history. In a short 45 years the best performing currency, the Swiss Franc, has lost 87% against gold, while the two worst ones — the dollar and the pound — have lost 97% and 98% respectively!

The Destruction Of Paper Money

It is absolutely remarkable that in just under half a century the US and UK currencies have lost all but 3% and 2% of their values. The table above confirms that all the fiat currencies will reach their intrinsic value of ZERO in the next few years. Something that has fallen in value by 87-98% is guaranteed to complete the journey until it has lost 100%. Anyone betting against that would be certain to lose his bet. So it is not a question of if but of when. I have been predicting for a while that the overvalued US dollar will be the next currency to fall. Technically it look like the coming dollar collapse may have already started. Trump’s statement that the dollar is too strong might be just the catalyst that ended the dollar’s multi-year countertrend rally.

A World Standing On The Edge Of The Precipice
Bearing in mind that the world is now standing on the edge of the precipice, the next collapse could happen very quickly. The reason for this is because we are now looking at a situation where every major nation in the world has an insoluble debt crisis. You can also include China, Japan and most emerging market nations in that category. 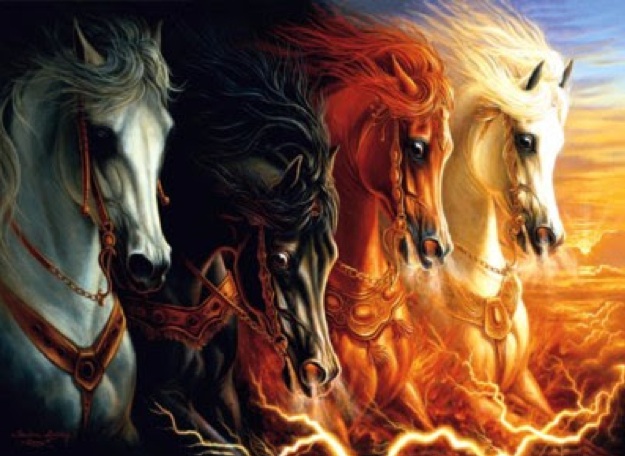 Huge Shock Will Bring The World To Its Knees
We must remember that the few percentage points left to reach a worthless currency for the countries above means a further loss of 100% measured from today. So in this “gold” table lies the answer to what will happen next, which is a debt and dollar collapse that will lead to global money printing of proportions never before seen in history. This hyperinflationary phase may take place in the next few years and will totally destroy the value of all money and also of many of the bubble assets that were financed by the credit boom.

When this situation unfolds in the next few years, gold is guaranteed to go well above $10,000 in today’s money and silver over $500. But we are of course not going to see today’s money in a hyperinflationary world. Therefore, the gold and silver prices will depend on how much money is printed. A price of $100 billion or $100 trillion per ounce, like in the Weimar Republic, would not be impossible. But that is of course a meaningless level in today’s terms. What is certain however, is that gold and silver will vastly outperform inflation and therefore do a lot better than just maintaining purchasing power.

It is virtually impossible for most of us to fathom what will happen to the world’s financial system, to currencies, and to precious metals in the next few years. But what is certain is that physical gold and silver at current prices represent the best form of wealth preservation and insurance that anyone can own. The scope of the coming collapse will mean that owning physical gold and silver in the coming crisis will be a necessity, not an option, for those who want to survive with their assets intact.”