Today one of the greats in the business sent King World News a fantastic piece that covers everything from the 1929 stock market crash to yesterday’s FOMC and market reaction across the globe.

October 29 (King World News) – From Art Cashin’s notes:  On this day in 1929, there occurred what was, for more than half a century, possibly the most dramatic day in Wall Street history. The day before, a Monday, had been disaster. (Monday’s have a lousy record but the final Monday in October is the champion stinkeroo.)

As you may recall, markets had originally been reassured by Thursday’s dramatic bids into a falling market by Richard Whitney, on behalf of the Morgan inspired bankers’ pool. And, they were further assured by calming words from “The Harvard Economic Society”. Back on the 19th they said – – “….. if recession should threaten serious consequences for business (as is not indicated at present) there is little doubt that the Reserve System would take steps to ease the money market and so check the movement.” And, the day after Whitney’s efforts the Harvard boys said about the severe slump in stocks “….. will prove an intermediate movement and not the precursor of a business depression…..”. (It would appear that the belief in a “Fed Put” may be as old as the Fed itself.)

Despite that, prices collapsed on Monday and Tuesday, the Harvard Economic Society doubted really dire consequences. As late as October in 1931, their Journal foresaw “….. an end of the decline and revival for the remainder of the year”. They might have said more but on this day (-2) in 1931 the Harvard Economic Society stopped publishing their Journal – – for lack of funds.

At any rate, on this Tuesday, traders were beginning to feel anxiety rather than reassurance. Monday, as noted, had seen prices melt below the levels where the bankers’ pool had bot during Thursday’s selloff. Piercing those levels had in fact brought in new nervous selling. Later testimony would assert that the bankers pool, seeing capital evaporate, had pulled back to plug future air holes. (Someone should read that record to regulators and academics who feel selloffs are a function of capital not sentiment.)

With the 1929 version of a circuit breaker having been overrun, selling became intense. Within the first half-hour volume exceeded 3 million shares. After two hours it was over 8 million. The selling was mindless. “White Sewing” which had sold at “48” weeks before and had closed at 11 3/4 Monday traded at one dollar per share. (Wall St. legend says the buyer was a page boy on the exchange floor who had put a “fun bid” in before the opening never dreaming he might actually “buy”.)

With prices in near free-fall, exchange officials called a secret meeting of the Governing Committee at noon. To preserve secrecy the meeting was held in the basement offices of the President of the Clearing House. They had invited two Morgan Bank partners to hear the views from the bankers’ pool. Unfortunately, to preserve secrecy they failed to tell security and the Morgan men were halted by a guard for over an hour. “We’re from the House of Morgan” the reply was probably “and I’m the king of bloomin’ Siam”. By the time the Morgan partners were admitted, the market had begun to rally and trading was never halted.

When the day ended, the tape was over four hours late and the volume over 16 million, a record that would stand for decades.

To celebrate have a pre-Halloween zombie with a coven of yuppies. But remember fondly that the hero of this tale of financial trick or treat was an individual, a two legged human, who, when the institutions panicked, put in a silly bid and got a great bargain. Nice trade, kid!

The markets had lots of volatility yesterday but, luckily, it had very little resemblance to that bumpy week in 1929.

After the opening pop, the buyers continued to nibble away, lifting stocks further into early afternoon. Around midday, I sent this synopsis to some friends:

Some interesting moves on a Fed day. Stocks follow their traditional upward bias but look at moves in crude and gold.

Crude inventories were up but less than last night’s API inventory. The key is that product inventories were down. That suggests that part of the “glut” is more about refinery rehab than slackening demand or increased production.

Gold pops up on a potential key reversal above the 200 DMA. Stock types guess the move in gold and oil may be looking to a very dovish FOMC statement.

The move in oil actually began several minutes before the inventory release at 10:30. That prompted several cynical traders to wonder aloud how interesting it was that someone had bet a lot of money on a “lucky guess” about the inventories. At any rate, crude spiked over 6% in what looked like a frenzy of short covering.

The gold move had come almost from the opening of trading and it hung tough all morning as the dollar weakened against the Euro.

As noted in my email, almost every asset class traded as though they were expecting a dovish tone to the Fed statement. That is not what they got.

At 2:00, all assets were rocked by the opening of a sentence buried in the third paragraph of the statement. In less than 20 words, they set markets on their heads. The words were: “In determining whether it will be appropriate to raise the target range at its next meeting …..”

Media pundits extrapolated that to headlines about the Fed’s “plans” to hike at the next meeting. The reaction was nearly instantaneous. Gold plunged. The dollar soared. Yields spiked. Stocks fell into negative territory.

By 2:20, stocks had circled the wagons and began to rally again. The stimuli appeared to be two pronged. First, and most important, was the fact that crude hung tough near the day’s highs. That brought buyers back into energy stocks, which helped lead the rebound.

The other factor was chatter that if the statement had been in script, the key sentence would have been in the handwriting of Vice Chair Stanley Fischer. Since his appointment to the Fed, Mr. Fischer has repeatedly and consistently pushed to have the FOMC push the idea that a liftoff in 2015 was not only possible but maybe even likely. Seeing the statement as merely an extension of the Fischer posture brought some buyers back to stocks.

The post-statement frenzy and subsequent rally helped raise the NYSE volume to over a billion shares.

Overnight And Overseas – Asian markets were mixed with small changes. Shanghai and Tokyo were up a smidge, while India and Hong Kong were a bit softer. In Europe, markets are a touch lower despite German unemployment coming in at the lowest level since re-unification.

Among other assets, the Euro is firming as the dollar softens a bit. Gold continues its retreat and crude gives back some of yesterday’s gains. The yield on the ten year dips a bit. U.S. futures are lower led by Nasdaq.

Consensus – Markets will readjust as they realize that while the Fed gave itself the “opportunity” to hike in December, such a move remains unlikely. GDP at 8:30 could be important. Watch crude closely for signs of reversal. Stay wary, alert and very, very nimble.

***ALSO JUST RELEASED: EXPOSED: The Terrifying Truth About What We Are Facing In The Future CLICK HERE. 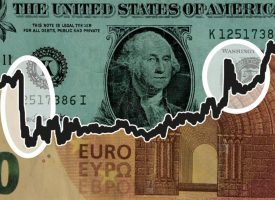