With the gold and silver markets rallying after yesterday’s Fed rate hike, today King World News is pleased to present an important update on the war in the gold market from Michael Oliver at MSA. Oliver allowed KWN exclusively to share this key report with our global audience.

The “Mini-Panic” In The Gold Market
By Michael Oliver, MSA (Momentum Structural Analysis)
March 16 (King World News) – The charts on left begin thirty-six months after the ETF emerged.  At that point we can begin to calculate a 36-mo. avg. and build an annual momentum chart.

In fact, the high for GDXJ was $179.44 in December 2010, several quarters before gold actually peaked. 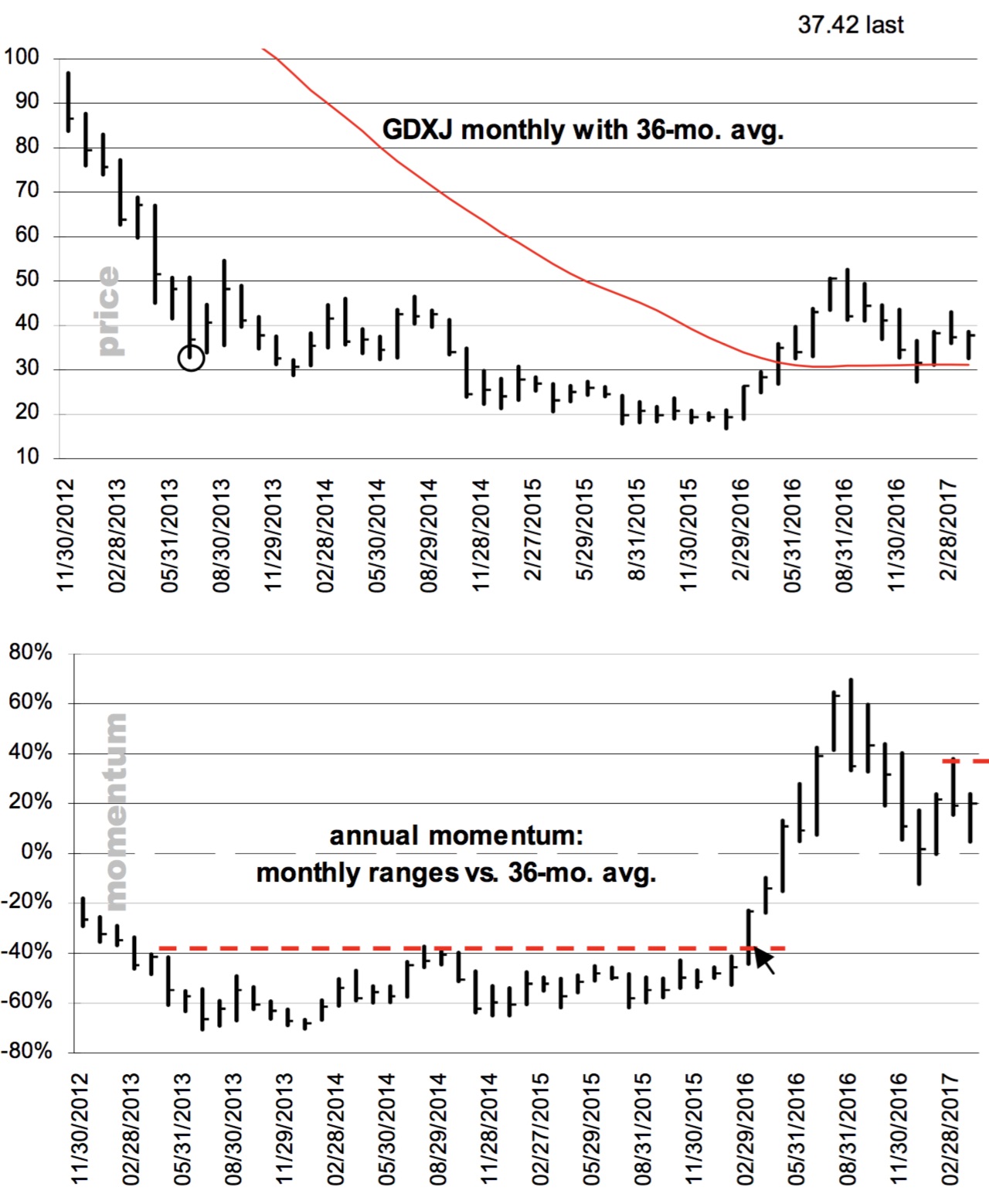 Its behavior from the lows of the June 2013 crash low (circled) through late 2015 was the same momentum behavior produced by GDX and gold.  Flat and massive basing action, not otherwise evident when looking at the continually decaying price chart.  Breakout was easy to define (though MSA was focused on gold and GDX at the time).  In February 2016 momentum blew the upper end out of the base (arrow), and a switch was flipped.  GDXJ’s price at the point of breakout was $21.35.  Measured from there, the post-breakout surge was a 146% advance…

The key structure for momentum was the level noted by the wide red horizontal (about -40%).  While in its December 2016 pullback gold corrected down to that same annual structure (the top end of a prior momentum base), GDX and GDXJ did not.  GDXJ seems to want to establish a support floor around the zero line/36-mo. avg.  It dropped below it in December, but closed above it by month’s end, and again this month has pulled back to near the 36-mo. avg. and rebounded.  If we see momentum readings subsequently rise above the February oscillator high (short horizontal), then MSA will suggest that the 36-mo. avg./zero line is an important level going forward—to maintain future monthly closes above.  For now it’s premature to call that a developed momentum structure, but it looks like that’s what GDXJ wants to do.

Taking out the annual momentum oscillator high of February (looking out a month to April) would require GDXJ’s price to move up to $42.87.  If that occurs, the zero line will become important as a structural reference point and a level to hold, especially on monthly closes.  By the way, that long-term average has only recently begun to rise, a positive but background sign.

Quarterly momentum (below) is also long-term, but obviously less so than 36-mo. momentum. 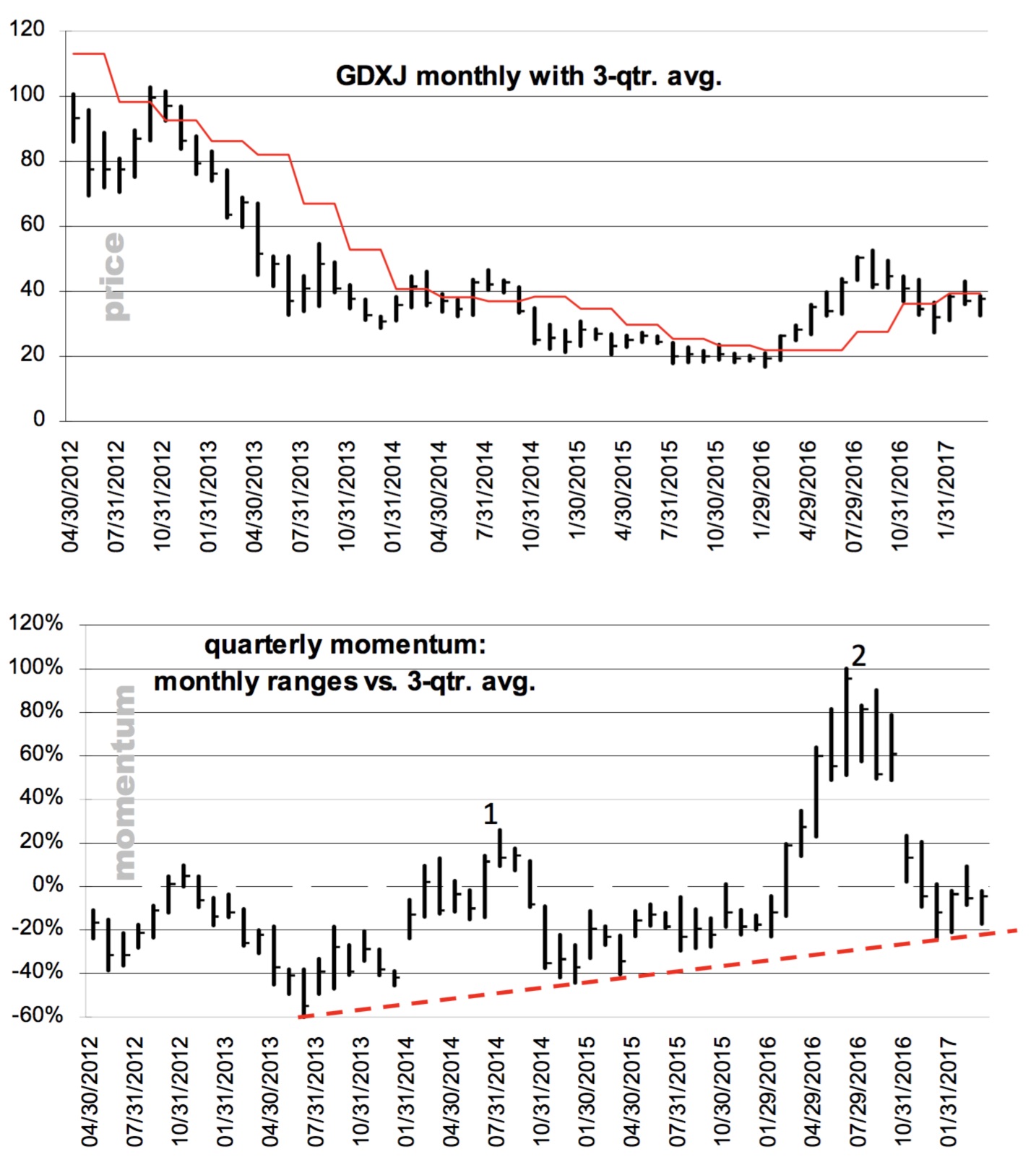 Since its lows in June 2013 (crash low for gold and gold-related), GDXJ’s quarterly momentum has produced two major up waves.  The recent drop fell back to what was an immature two-point uptrend, and recent action is holding that developing trend structure.  If we see sufficient further upturn (like that $42.85 level, which takes out the February oscillator high on annual momentum), then we’ll have a three-point uptrend structure on quarterly momentum to reference in the future (as well as the zero line area on the 36-mo. avg.).  A set of risk control levels that will rise along with GDXJ.

Relative performance
Whether measured versus GDX or gold, the junior minors have outperformed since the 2015 lows. 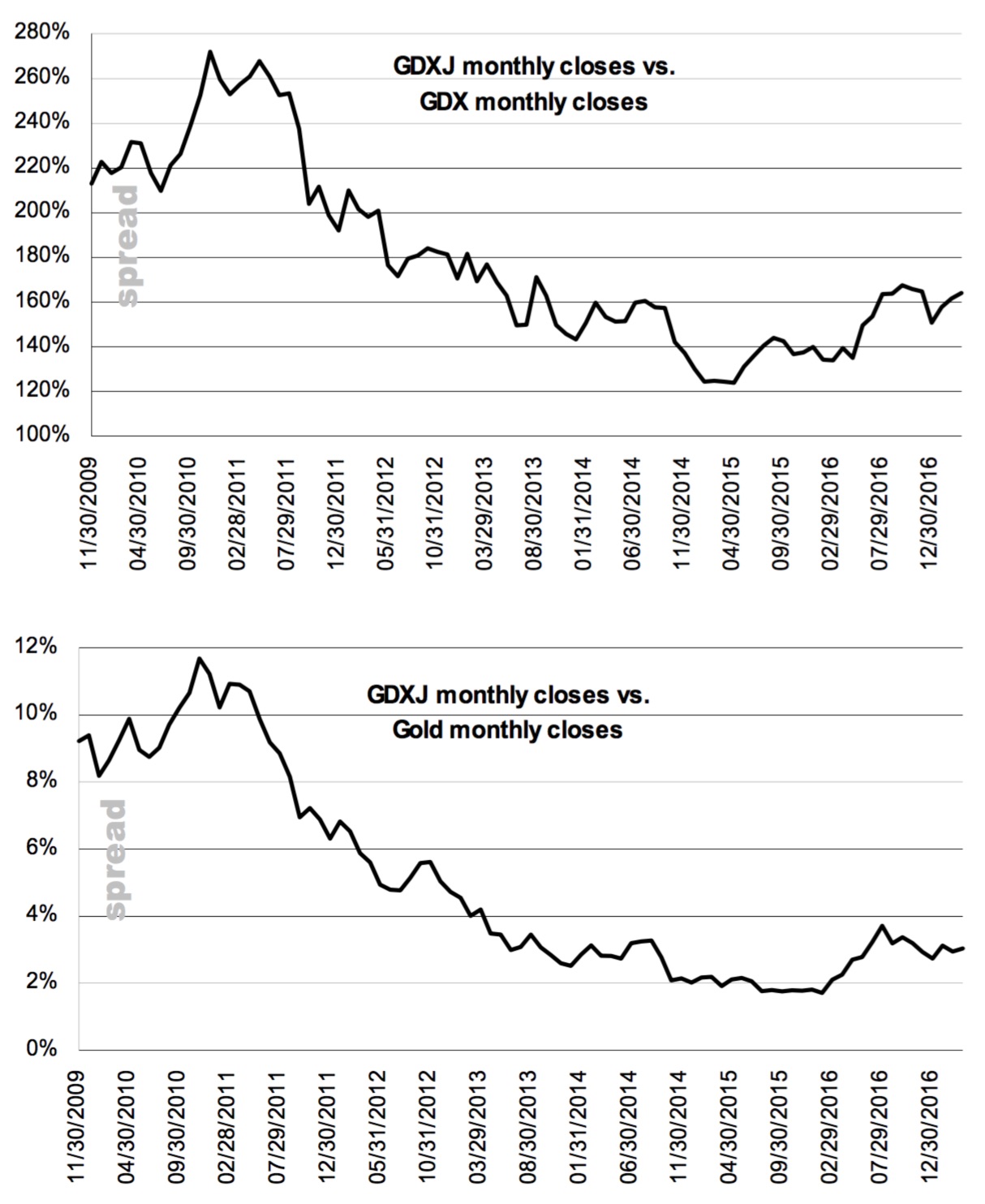 Furthermore, these spread charts look like emerging bottoming action, with more to go on the upside, especially if the highs of several months ago on the spreads are exceeded.”

***ALSO JUST RELEASED: What Is Happening Behind The Scenes Is Very Worrying CLICK HERE.