May 26 (King World News) – James Turk:  “One of the old stand-by adages about Wall Street, Eric, is to “sell in May and go away.” This advice has often worked in the past because things slow down during the summer months with people focusing on their holiday rather than markets.

Gold Sector Massively Under-Owned
While that adage might work again this year for the Dow Jones and other indices at or near record highs, the one thing you do not want to sell this May is the shares of mining companies.  In fact, the only people left in the gold, silver and mining share markets are the long time bulls, and so many of them have become exhausted or even pessimistic because of the price action in terms of the long consolidation.

Back in December 2010 the XAU Mining Share Index touched 230. Currently it is trading around 165, but the important message can de seen in its chart: 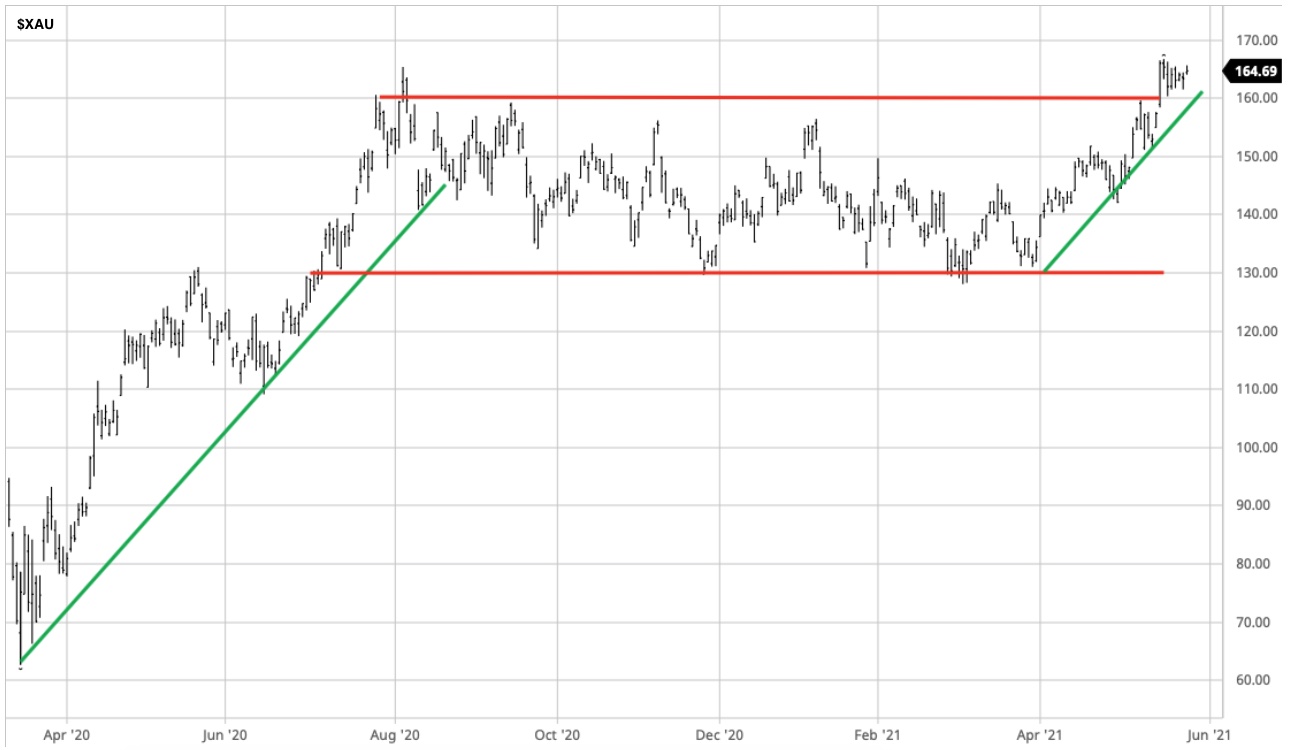 Since last August, when gold stormed higher to a new record, the XAU Index has been consolidating its 2020 gains in a wide 130-160 trading range. The XAU Index recently popped out of that range to new 9-year high, forming over the past few days another consolidation pattern that looks very bullish.

Big Upside For Mining Stocks
So all the miners need now to break higher again is for gold and silver to continue their climb higher in their uptrends that began at the March 2021 low. Maybe the March low this year will prove to be as significant as that March low was last year. After all, last year’s low launched gold to its record high only five months later in August 2020.

Look at the price appreciation in XAU Index last year. With higher precious metal prices around the corner, it seems safe to conclude that the miners have a lot of upside potential…

Maple Gold Intersects 132 Metres of 1.58 g/t Gold in Nika Zone at Douay
Vancouver, British Columbia–(May 26, 2021) – Maple Gold Mines is pleased to report results from the second hole of the recently completed 10,270-metre winter drill campaign at the Douay Gold Project (“Douay” or the “Project”) in Quebec, Canada, which is held by a 50/50 joint venture (the “JV”) between the Company and Agnico Eagle Mines Limited.

Matthew Hornor, President and CEO of Maple Gold, stated: “We are thrilled with these results from the JV’s maiden drill campaign. Hole DO-21-282X returned one of the best grade-thickness intercepts ever encountered at Douay and is a testament to what a collaborative approach to exploration can uncover. We look forward to reporting more assays in the coming months from additional step-out and discovery drill holes completed this winter.”

Fred Speidel, VP Exploration of Maple Gold, added: “This 132-metre interval at Hole DO-21-282X, which contains nearly continuous gold mineralization, is substantially longer than the original 50-metre discovery hole we intersected at Nika in 2018. Furthermore, the zone remains open in multiple directions including up-dip at shallower depth; below the current conceptual pit floor; and further along trend both to the northwest and southeast, where similar structural blocks remain undrilled. This result supports our belief that multiple existing zones at Douay host more continuous mineralization than what has been discovered to date and reinforces the expansion potential we see across the Project and land package.” Maple Gold Mines, symbol MGM in Canada and MGMLF in the US.