Today one of the greats in the business spoke with King World News about the United States, Weimar Germany and what the Fed is really up to.  He also included two fantastic illustrations that all KWN readers around the world must see.

James Turk:  "Each week the world’s financial picture goes further and further into la-la land, Eric. In short, things are getting crazier. An example is the hullabaloo the Federal Reserve created by dropping the word “patience” from its statement after the latest FOMC meeting. The Fed calls these statements ‘guidance’. In another era, they would be recognised for what they really are – propaganda….

"The Fed makes these announcements to massage financial markets into doing what the Fed wants them to do. Oddly, it’s working. Not only is the Fed rigging markets with its interventions, it’s directing markets by its regular announcements. So the distortions in the markets as well as the economy are becoming even greater.

Will The Fed Really Develop A Happy Outcome?

Momentum players dominate the stock market today, meaning that fewer and fewer investors focus on value anymore. That is leading to trouble because this growing number of investors simply believe that the Fed will develop a happy outcome.

This legion of investors, whether wittingly or not, is ignoring the Fed’s track record. They even ignore the details of what the Fed is saying.

In the fine print in this latest announcement, the Fed clearly lowered its outlook for the US economy. That’s why oil is still under $50 a barrel. Energy consumption is down because economic activity is weak. Things like gasoline sales continue in the downtrend that began at the peak before the 2008 collapse, as shown on the following chart.

So even though the economy is doing worse than the Fed expected, the Fed is still singing the same song. It wants interest rates to stay near zero. The time frame for zero interest rates is now approaching seven years as we can see in the following chart. 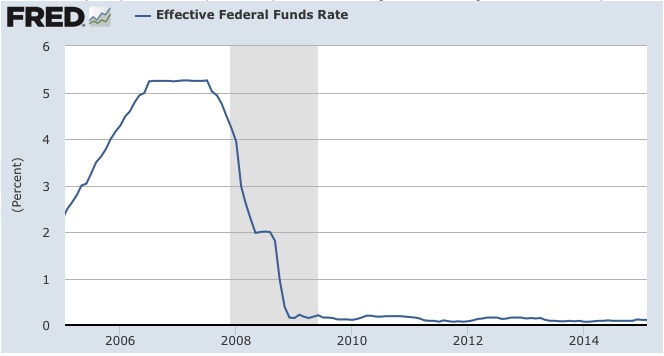 Despite all the evidence that these low interest rates are not helping the economy, the Fed is determined to keep rates low in order to try proving its theories. There are too many PhD’s on the line for the Fed to change course, and the country’s savers are not a unified force.

So here’s the important conclusion to be drawn from this, Eric: Even though the economy is headed into the dumpster, the stock market is headed higher for another reason. The stock boom is a result of Fed mismanagement, just like the speculative stock market booms in 1929 and 1999. We are in an environment where the Fed is killing savers to keep in the air an unsustainable system of borrowing and spending.

However, this time the outcome may be different from 1929 and 1999. It will be more like the outcome of Weimar Germany, Zimbabwe or any other country that had more debt than the economy could carry. In these countries the currency collapsed.

When a currency collapses, the share price of companies that own tangible assets like agribusinesses, oil companies and miners, continue to climb. These are a safe haven of sorts. However, physical gold and silver have track records that date back thousands of years, proving they are the ultimate safe havens." ***ALSO JUST RELEASED: Is The Gold Market About To See A Sustained Upside Advance? CLICK HERE.

Here Is The Key To The Rally In The Gold & Silver Markets, Plus A Surprise