On the heels of the flash crash which saw the price of gold plunge more than $50 in the blink of an eye, today King World News is featuring a piece by a man whose recently released masterpiece has been praised around the world and recognized as unique work in the gold market.  Below is the latest exclusive KWN piece by Ronald-Peter Stoferle of Incrementum AG out of Liechtenstein.

What is the reason for our unbroken confidence in gold? Our predilection for gold is primarily based on our understanding of monetary history. At the moment, it appears as though faith in the omnipotence and infallibility of central banks is at an all-time high. This goes hand in hand with new record highs in stocks and especially government bonds. According to Jim Grant, who describes the price of gold as the reciprocal of the credibility of central banks, this is inter alia a likely explanation for the somewhat directionless performance of the yellow metal. Should the omnipotence of central banks be questioned by the markets, it could cause a fundamental change in perceptions and help gold regain its former respect and reach new heights.

“Time is the best teacher, but unfortunately, it kills all of its students.” — Robin Williams

In addition, our analysis is reinforced by a comparison of the current situation with that of the last great bull market of the 1970s and how it ended. There is a fundamental difference: Back then the Fed tried to end the trend of rising price inflation with restrictive monetary policy, but today central bankers around the world are trying their best to create accelerating price inflation. The stronger the systemic desire for rising prices becomes, the more creative and radical the actions of policymakers become in order to attain this goal.

“I do not hesitate to say that although the prices of many products of the farm have gone up […], I am not satisfied. It is definitely a part of our policy to increase the rise and to extend it to those products that have as yet felt no benefit. If we cannot do this one way, we will do it another. But do it we will.”1 — US president Franklin D. Roosevelt, October 23, 19332

The constantly applied artifices of banking and currency policy have in the meantime become a necessity in order to artificially lengthen the lifespan of the fiat debt money system. Due to the latent potential of extreme money supply inflation, not just infinite credit growth, but also the associated rapid, sharp contractions thereof, it no longer represents a sound basis for the economy, but rather evokes connotations of an earthquake-prone region, in which a tectonic plate fault permanently threatens the achievements of civilization. As a result, the economy has in the meantime degenerated into a political construct, in which the principal objective consists of anticipating exogenous interventions as well as possible and exploiting them for oneself.3

It seems strange to us that after seven years of unconventional central bank policy, there is no debate as to whether these measures have any effect at all resp. whether the situation wouldn't actually be better without QE.4 The narrative of rising asset prices and a relatively painless way to supposedly sustainable growth is barely questioned.

Unconventional monetary policy is justified by an emergency situation and is only temporary. Or is it not? How simple is the often-promised return to “monetary normality” really? In this context, Japan is an example that proponents of monetary policy experiments would rather not look at too closely. The country is a “model student” of highly aggressive monetary policy.5 Zero interest rate policy has been de facto in place there for almost 18 years. Every attempt to hike rates came to grief within a few quarters and had to be rescinded again in embarrassment.

Japan thus demonstrates that the monetary policy measures held to bring salvation for many years already have failed, and an exit remains out of sight. Due to the zero interest rate policy, the government was able to amass such a huge amount of debt that a significant increase in interest rates has become illusory for good. If one asks Western monetary policymakers why the prescribed medicine has failed to have a sustainable effect in the land of the rising sun over the past two decades, the cynical explanation is that not enough of it has been taken….

Should inflation expectations rise sustainably in the course of the aggressive reflation program, it has to be assumed that bank deposits will be withdrawn step by step and shifted into alternative investments. Japan's gold demand, which has already tripled last year from a very low level, increased significantly. It is no coincidence that gold in yen terms is trading only slightly below its all time high. We are convinced that the gold price in yen terms will continue to rally significantly in the years to come. 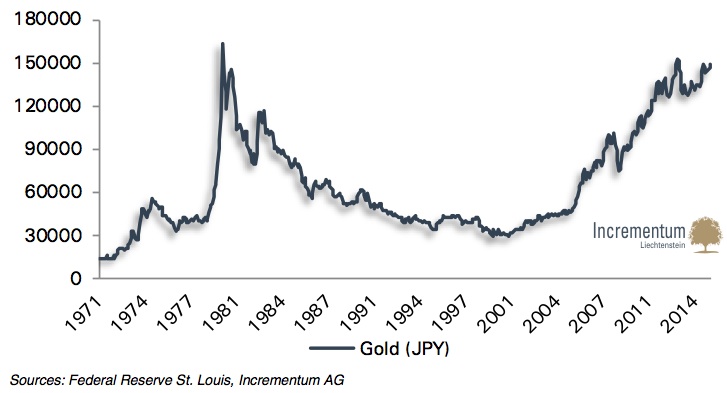 “The biggest bubble out there is central bank credibility. If Draghi was a stock he'd be on a P/E of 200! Yellen's on 100. When that bubble pops, all hell will break loose again, and there you really just want to be in cash.” — Gerard Minack

The sweet, contagious poison of currency devaluation has now – after Japan – also spread to the euro area. The expectation of a European dose of monetary aphrodisiacs has on the one hand led to a sharp decline in the euro's exchange rate (from USD 1.40 to USD 1.04), as well as to a rally in European stock markets and a (final?) once-in-a-century rally in government bonds. We find this reminiscent of a classical crack-up boom. It gives us pause that the temporary, weak economic recovery resulting from the devalued currency tends to be lauded and is barely criticized. If the debasement of a currency could promote wealth and prosperity, Zimbabwe and Venezuela would have to be at the top of the world's economic rankings and Switzerland at the bottom. As is well known, the exact opposite is actually the case.

The following chart shows that since 2011, the trend in money supply growth rates and the gold price are diverging. The money supply is measured by combining the balance sheet totals of Federal Reserve, ECB, SNB, People's Bank of China and the Bank of Japan. When money supply growth exhibits a greater momentum than the growth in the physical stock of gold, the gold price should rise and vice versa. The divergence evident in the chart therefore either points to the fact that the gold price correction has gone too far, or that central bank balance sheets will stagnate, resp. decline in the future. Anyone who has studied economic history knows how few precedents of sustained declines in central bank balance sheets have occurred to date. Consequently, it is to be expected that the gold price will correct the divergence by rallying. 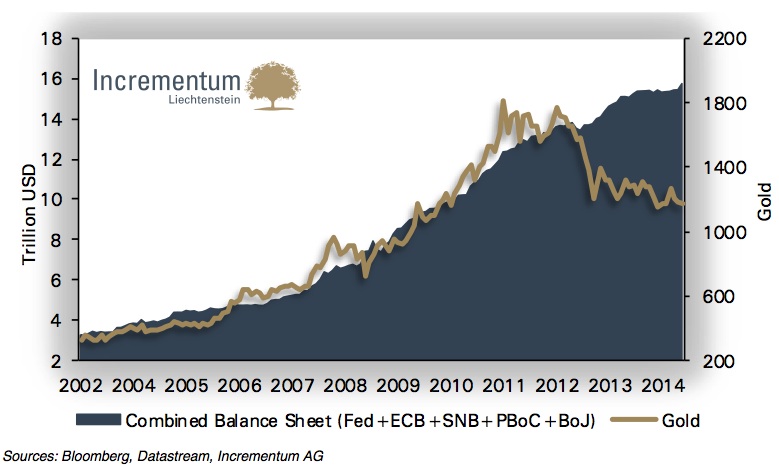 “If you don’t own gold, you know neither history nor economics.” — Ray Dalio

Readers of our annual report know that we analyze gold primarily as a monetary asset and not as a commodity. In our ninth “In Gold we Trust” report, we will therefore once again take a sober look at the big picture and analyze the gold sector in a holistic manner. We can already pre-empt the conclusion at this juncture: The competitive position of gold relative to paper money and other asset classes has improved considerably in recent months.

1 See https://www.youtube.com/watch?v=kTe4paRPEM4 – FDR promises in a speech to turn around the deflationary forces by all means available, which he managed to do a few months later by revaluing gold by nearly 70% against the US dollar.
2 Note: during the Great Depression in the 1930s a reversal in the deflationary trend could ultimately only be achieved by revaluing the gold price from USD 20 to USD 35.
3 See “The Big Picture”, Ritholtz.com
4 We want to point to our explications further below here, resp. Frédéric Bastiat's essay “What is seen and what is not seen”.
5 See “In Gold We Trust 2014”, chapter “Is Europe threatened by a Japanese scenario?” p. 41-43

Big Picture Bullish For Gold But Look At What Hedge Funds Are Up To, Plus Chart Of The Week And Many Other Surprises