Today the man who has become legendary for his predictions on QE, historic moves in currencies, and major global events warned King World News about a $500 trillion ticking time bomb that will devastate the global financial system.

Egon von Greyerz:  “Eric, markets are waiting for the Fed decision on December 16.  At this point the Fed doesn’t have a clue what to do.  Since they have no long-term policy and only react to events, they hope that in the next 26 days they will have more clarity…

Egon von Greyerz continues:  “Increasing rates by 1/4 percent would give the indication of a strong economy.  So the primary reason why they would lift rates is to give the illusion that all is well in the United States. 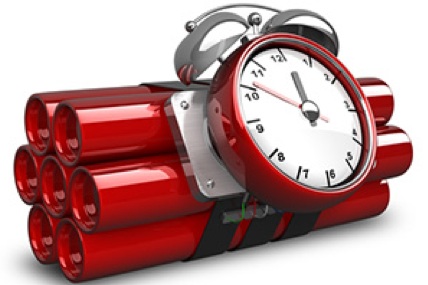 The $500 Trillion Ticking Time Bomb
But Yellen knows that things are far from well.  She knows that unemployment is not 5 percent, since 94 million people capable of work are not working.  She also knows that the risks in the U.S. and in the world economy are greater than ever.

The U.S. federal debt is $18.5 trillion and total debt is close to $70 trillion.  On top of that there are unfunded liabilities in excess of $200 trillion, plus there is around $500 trillion of interest-rate-sensitive derivatives in U.S. banks.

With a debt and risk position of around 3/4 of a quadrillion dollars, it’s not the most comfortable position for the Fed to increase interest rates.  On top of that, the overvalued U.S. stock market could hardly cope with an interest rate increase.  The market is in the final stages of a secular bull market and any bad news will be the catalyst for a bear market of massive proportions.

Sub-Prime Problems
The bubble credit markets in the U.S. have created debts in many sectors that will never be repaid.  Car loans are now developing into a sub-prime problem and so are student loans.  And junk bonds have crashed by 1/3 in the last 15 months.  A major part of the problem is of course the oil and gas sector, but other areas are also under pressure.

Corporate debt has also been surging.  Since 2009, net corporate debt has risen from $1 trillion to $2.5 trillion.  This trend is particularly dangerous since profits are now falling because debt is increasing.  In the long run it will make no difference what the Fed decides to do with interest rates at the December meeting.

The U.S. economy and the U.S. dollar will fall regardless of what the Fed does because no economy can ever survive a such a massive debt burden.  I doubt there will be an increase in interest rates but the Fed has made many incorrect decisions in the past.

So if the decision isn’t crystal clear, what is absolutely certain in my view is that in early 2016 the Fed will start its next phase of quantitative easing.  And that program will dwarf all the money printing that the Fed has ever embarked upon.  When the next money-printing bonanza has finished in a few years time, the Fed may have already printed over one quadrillion dollars.

But it’s not just the U.S. that has problems.  In Europe, 12 countries now have negative interest rates.  European countries are making futile attempts to create inflation.  Draghi just announced that the ECB will ‘do what we must to lift inflation as quickly as possible.’  This makes it totally clear that the ECB will increase its QE program in December.

But the coming worldwide money-printing binge will have no positive effect on the global economy.  All it will do is create hyperinflation and collapsing currencies.  2016 will be annus horribillis for the world.  The very few who hold physical gold and silver will at least hold insurance that will protect them from total wealth destruction.” ***To listen to one of the most extraordinary KWN audio interviews ever with David Stockman, where he discusses the war in the gold market, desperation of Western central banks, coming financial destruction, and what will cause the great unwind, you can listen to by CLICKING HERE OR ON THE IMAGE BELOW.

This Continues The Astronomically Abnormal Market Activity Over The Past Week