With the Dow surging and gold and silver consolidating recent gains, King World News is pleased to share a piece from one of the greats in the business discussing everything from the action in the major markets to the FOMC, plus a bonus Q&A that includes questions on the gold market.  Also included are three remarkable illustrations, one of which may be the most shocking chart in the history of the gold market.

October 8 (King World News) – Overnight markets were essentially a nonevent, even as China played catch-up to world stock market rallies that occurred while that country was on holiday…

The early going here saw a mixed bag, with the S&P and the Dow just slightly lower, even as the Nasdaq dropped 1% through midday with the tech high-flyers leading the charge to the downside. I should also note that bank stocks were weaker, thanks to a big write-off and dividend suspension by Deutsche Bank, although its stock price was only hit for 2%, so it’s not as if that was treated as bloodcurdling news.

Every Delusion Has Its Price

As we survey the landscape we can see that bad news kind of matters, depending on the company, but as we saw with Monsanto yesterday, if you announce horrendous earnings guidance but throw a bunch of corporate buybacks and layoffs at the picture, folks shrug it off. The bottom line being, folks still seem to be operating from the playbook where stocks can only go up. It will likely take a decline in the market itself to make people uptight, but we will know soon enough.

The market remained slightly weaker until the FOMC minutes were released, which were dovish as usual, but for some reason folks got excited and jammed the market about 0.75% in less than an hour. From there the indices traded sideways into the close. Away from stocks, green paper was weaker, oil gained 4%, and fixed income was lower, as were the metals, with silver losing 2.5% and gold 0.5%.

Question: Like a lot of others – I’ve had to get skinny on metals and miners to survive. Now that we see a little light and are carefully adding exposure again what kind of ratio would you suggest between Miners vs Metals for new purchases? Thanks.

Answer from Fleck:  “Sorry, I have no good advice about that. Right now I think miners have far more upside than the metal itself, but one should also own metal to some degree, I think.“

Question: Hi Bill. Welcome back. TA’s are noticing the gold and miner charts. FWIW last Friday, Bubblevision’s frequent TA analyst Carter Worth went bullish on gold, and recommends miners cause of what we all know – they are at all time lows, whereas gold is not.

This is a new opportunity to buy gold: Technician

Answer from Fleck: “They are going to go up a lot once the trend starts to really get established.“

King World News note: Below is a portion of the CNBC interview as well as three charts that were featured:

Looking at a very long-term chart of gold, Worth pointed out that the precious metal has hit a critical technical level. “If you were to draw a line along the peaks at or near the highs since 2011, we’ve flirted with this downtrend line three or four different times,” he added. “Any type of [continued] strength will do one thing: it will start to move us above this downtrend line that’s been in effect for three years (see chart below).” 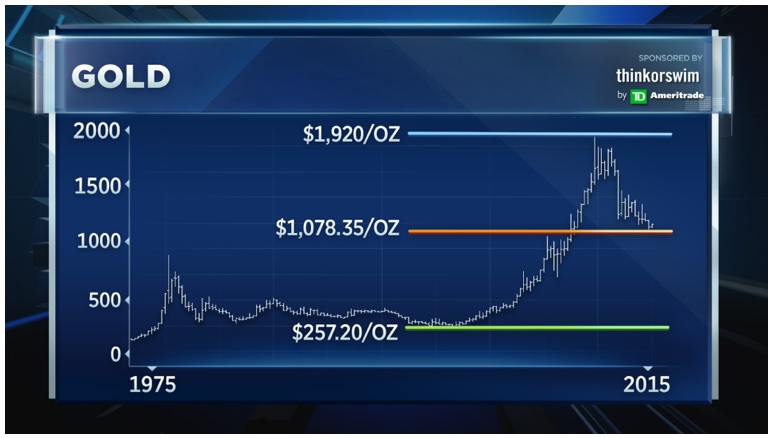 For Worth, rather than pile into the commodity itself, investors could stand to profit more from gold-related stocks, specifically the gold miners. “Gold is halfway back from its low but if you look at gold miners [they] are at the all-time lows,” he said. The gold miners ETF, the GDX, is down more than 18 percent in 2015. “We’re going to play this off this all-time low and make a bet,” he added. By Worth’s work, the GDX should begin to catch up to gold (see chart below). 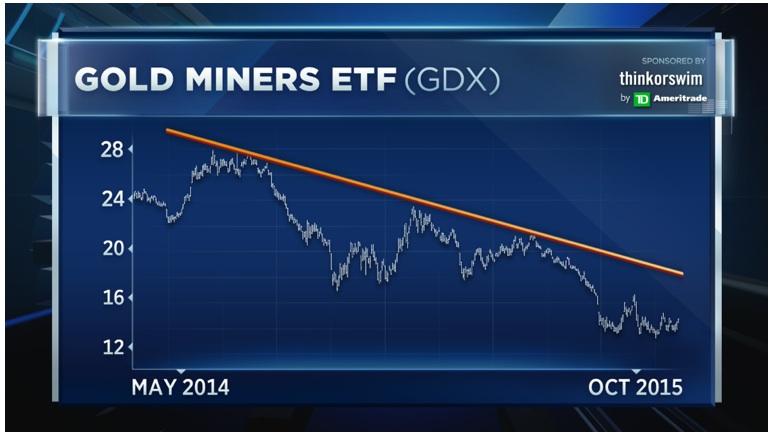 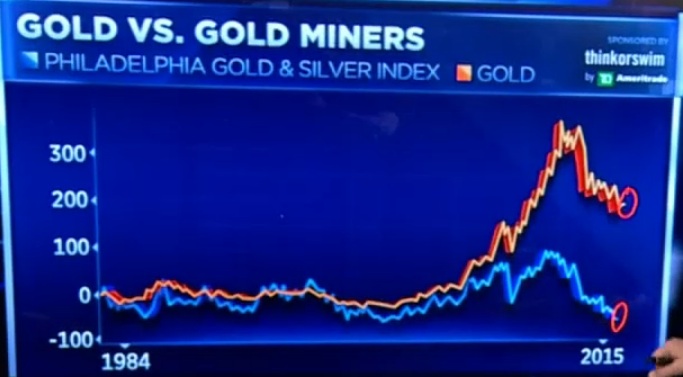