With the next global crisis rapidly approaching an interesting question is being asked, is the gold price really headed to a jaw-dropping $20,000 – $150,000?

“With the gold-standard abandoned, there is no necessity for the Federal Reserve or its controlled Banks to redeem dollars in gold, and so the Fed may expand the supply of paper and bank dollars to its heart ́s content.” — Murray N. Rothbard

The Shadow Gold Price
By Ronald-Peter Stoeferle, Incrementum AG Liechtenstein
June 14 (King World News) – Despite having been officially outlawed as money decades ago, gold still remains the primary monetary reserve asset of all major central banks. Based on our remarks in this report and the 10 preceding reports, it should be clear that we believe that gold must be regarded as a monetary asset.

We first presented the so-called “shadow gold price” calculated by Paul Brodsky and Lee Quaintance in 2011. This way of looking at the gold price is by no means a mere intellectual game. Rather, it is in line with how the exchange rate between paper money and gold was determined according to the Bretton Woods agreement (US monetary base divided by US gold reserves). As Brodsky and Quaintance explain:

A rising SGP implies USD purchasing power dilution in gold terms experienced under the post-Bretton Woods flexible exchange rate system. The widening gap between the SGP and the spot price from 1980 to 2008 reflects the steady creation of USD base money as US and global output expanded. The sudden exponential rise beginning in 2009 reflects extraordinary base money creation through Fed QE.”

To take this concept one step further, we will in the following calculate an International Shadow Gold Price. For such purpose, in the first stage of our calculations we will consider the following six major reference currencies

We will first approach a series of prospective shadow gold prices in terms of each of these six currencies, based on their monetary aggregates M0 (Monetary Base), M1, M2 and M3 and their respective gold-backing in terms of each central bank ́s gold holdings. Then, we will move on to project an international shadow gold price based on the relative proportions of each of these country ́s GDP with respect to the world GDP.

Worldwide Gold Stock and Central Bank Gold Holdings
Considering that the total world stock of official gold reserves amounts to 33,259 metric tons, we may deduce that the central banks of the six reference countries currently hold almost 70% of the official world gold reserves. On top of that, 56% of these worldwide official gold holdings lie in the vaults of the US Federal Reserve and the European Central Bank, as depicted in the following table. 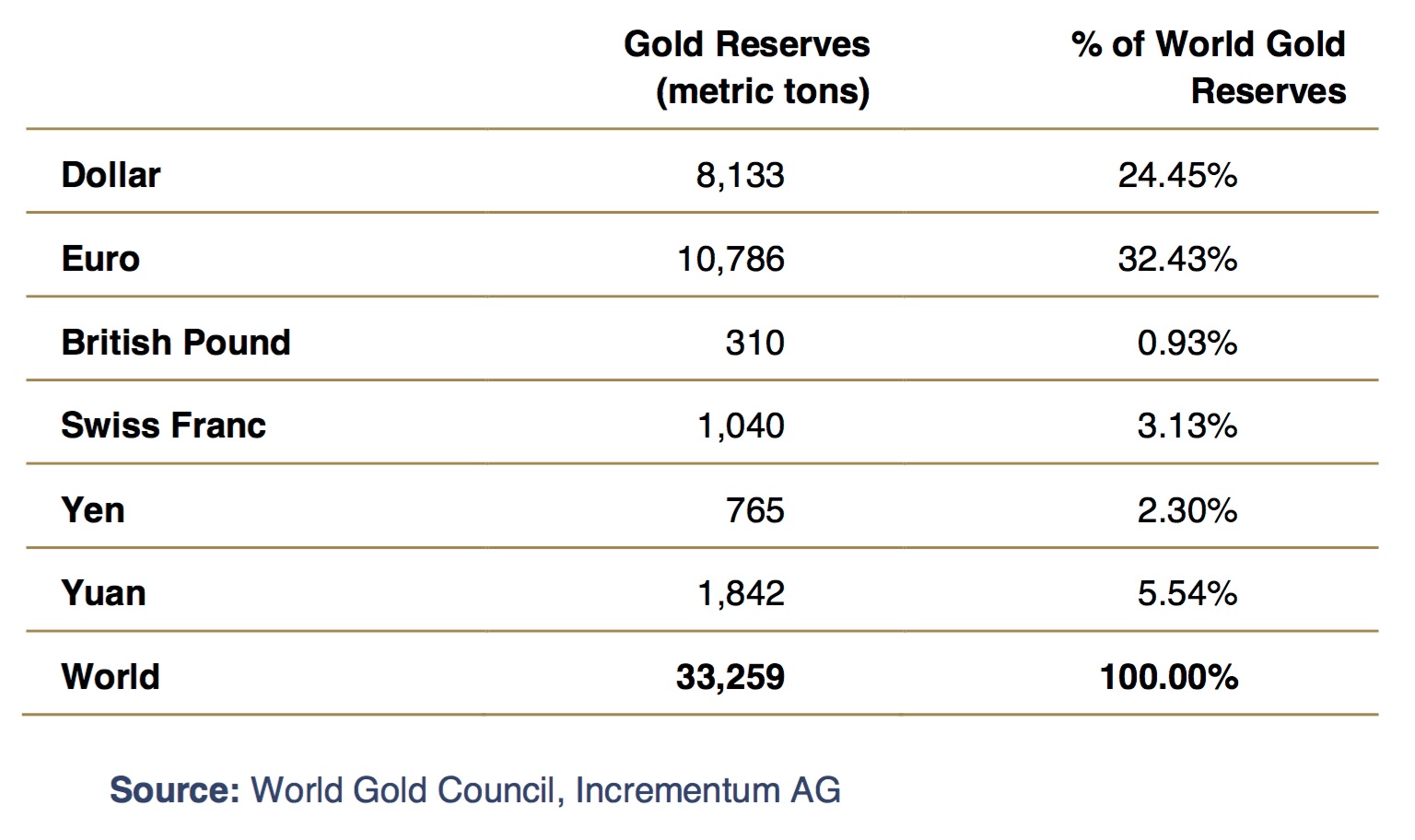 The Gold-Backing of Monetary Aggregates
As shown in the following table, we have calculated a series of shadow gold prices, by dividing the stocks of the different monetary aggregates by the amount of gold holdings in their respective central banks. This helps to get a feeling of how many units of each currency are in fact backed by gold.

The amounts of such aggregates backed up per troy ounce of gold reserves currently stand at 5-figure levels, as depicted in the following graph. 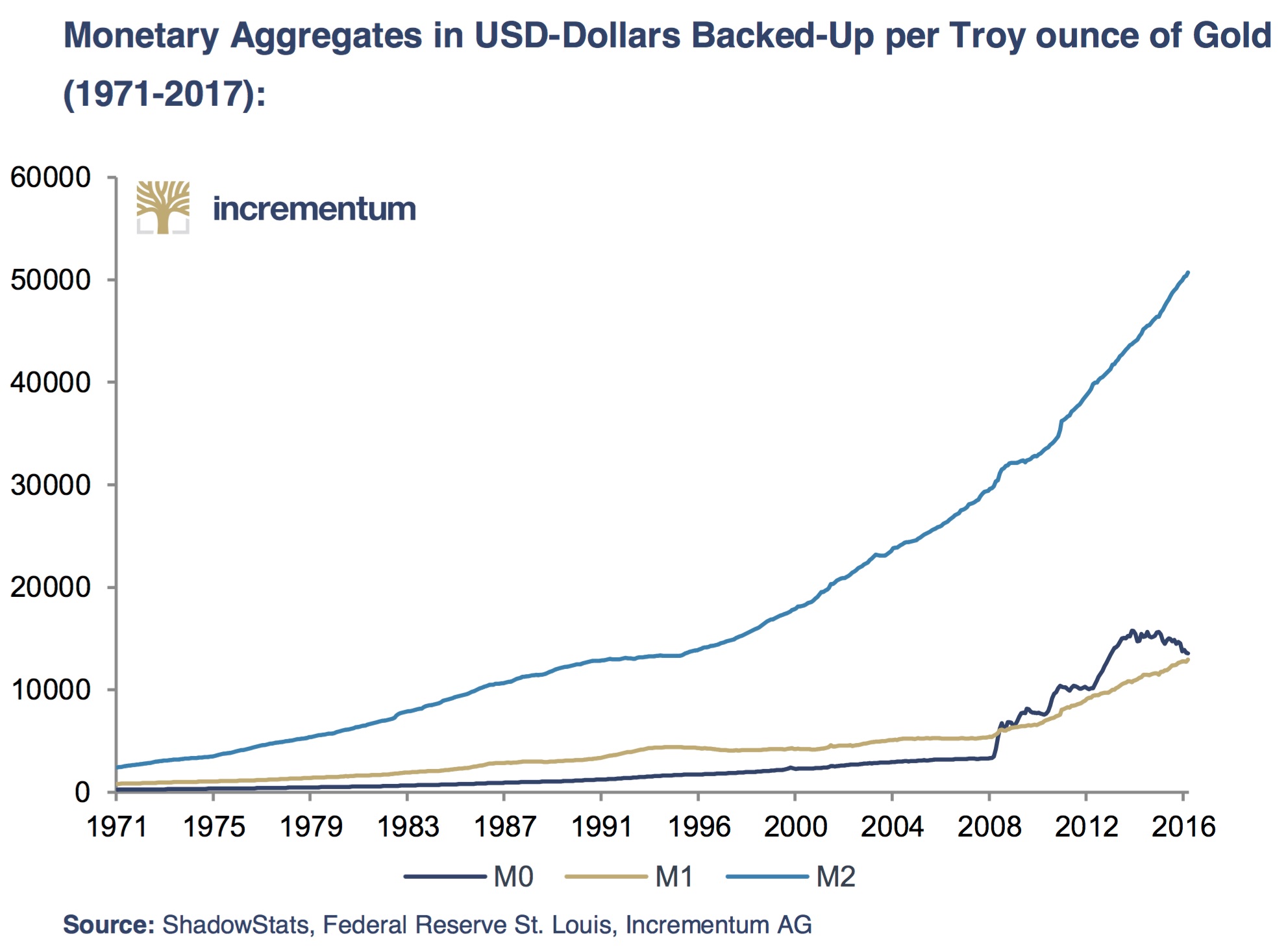 Such pyramiding on top of actual gold reserves denotes the extent to which gold is undervalued. We may therefore deduce that over the past decades these aggregates have experienced a significant downtrend in terms of their gold-backing. One could also conclude that gold became significantly cheaper because of this unrestrained monetary inflation.

As clearly shown in the following graph, the monetary base (M0), as well as M1, M2 and M3 have seen their gold-backing dwindle to levels below 10%, as measured in terms of the US official gold holdings at actual market prices instead of the official valuation of monetized gold at USD 42.22 per troy ounce: 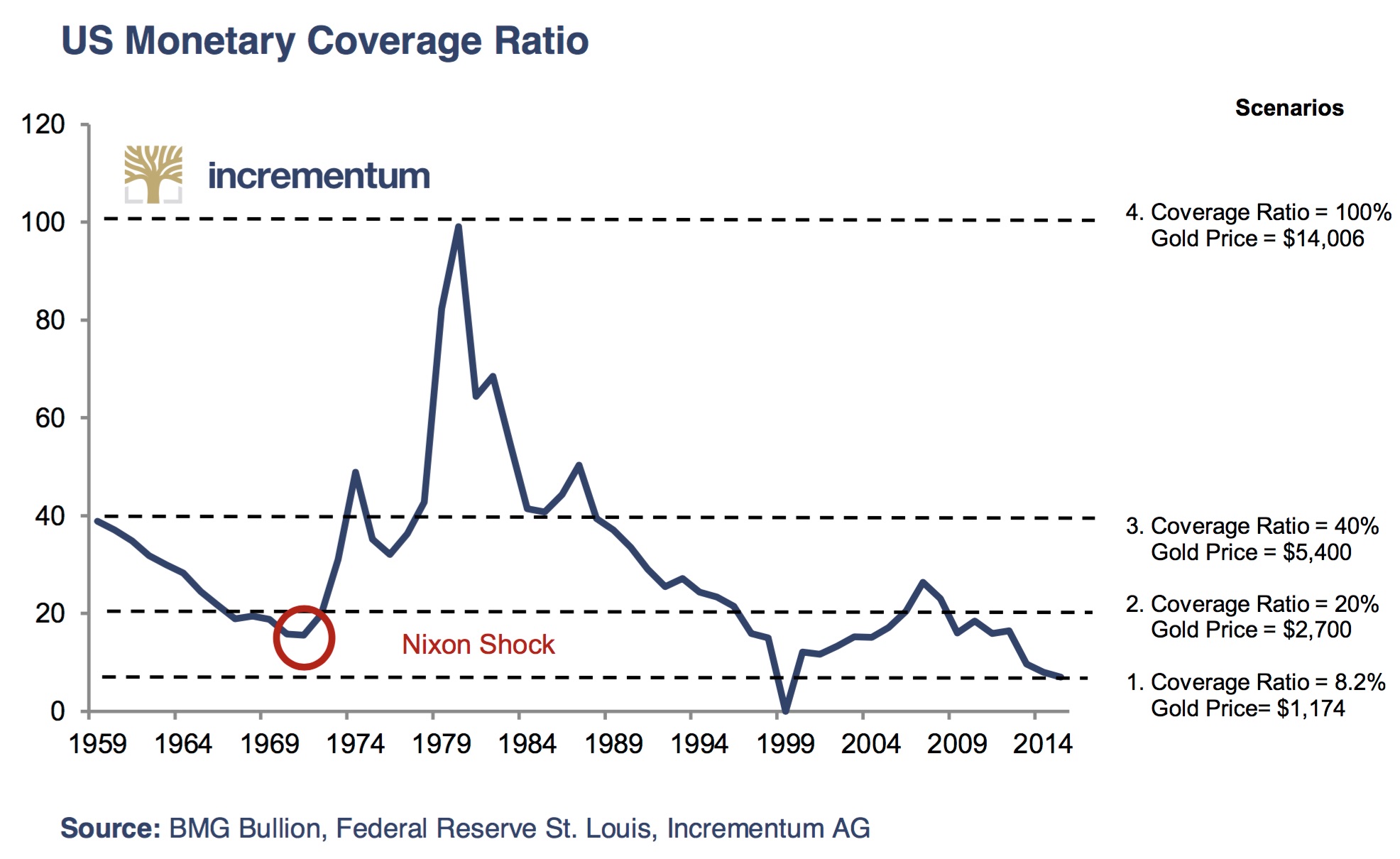 Following this train of thought, we may also project at which market prices a troy ounce of gold should trade to back up each of such US monetary aggregates in larger proportions, namely 20%, 40% and 100%:

The International Shadow Gold Price
Based on the prospective shadow gold prices previously estimated for each of the six currencies, we may now move on to approach an international shadow gold price, based on the relative proportion of each of those six economies on the world GDP. As shown in the following table, in terms of the real gold-backing of worldwide reference fiat currencies, the market price of gold remains significantly undervalued with respect to the different monetary aggregates of our six reference countries 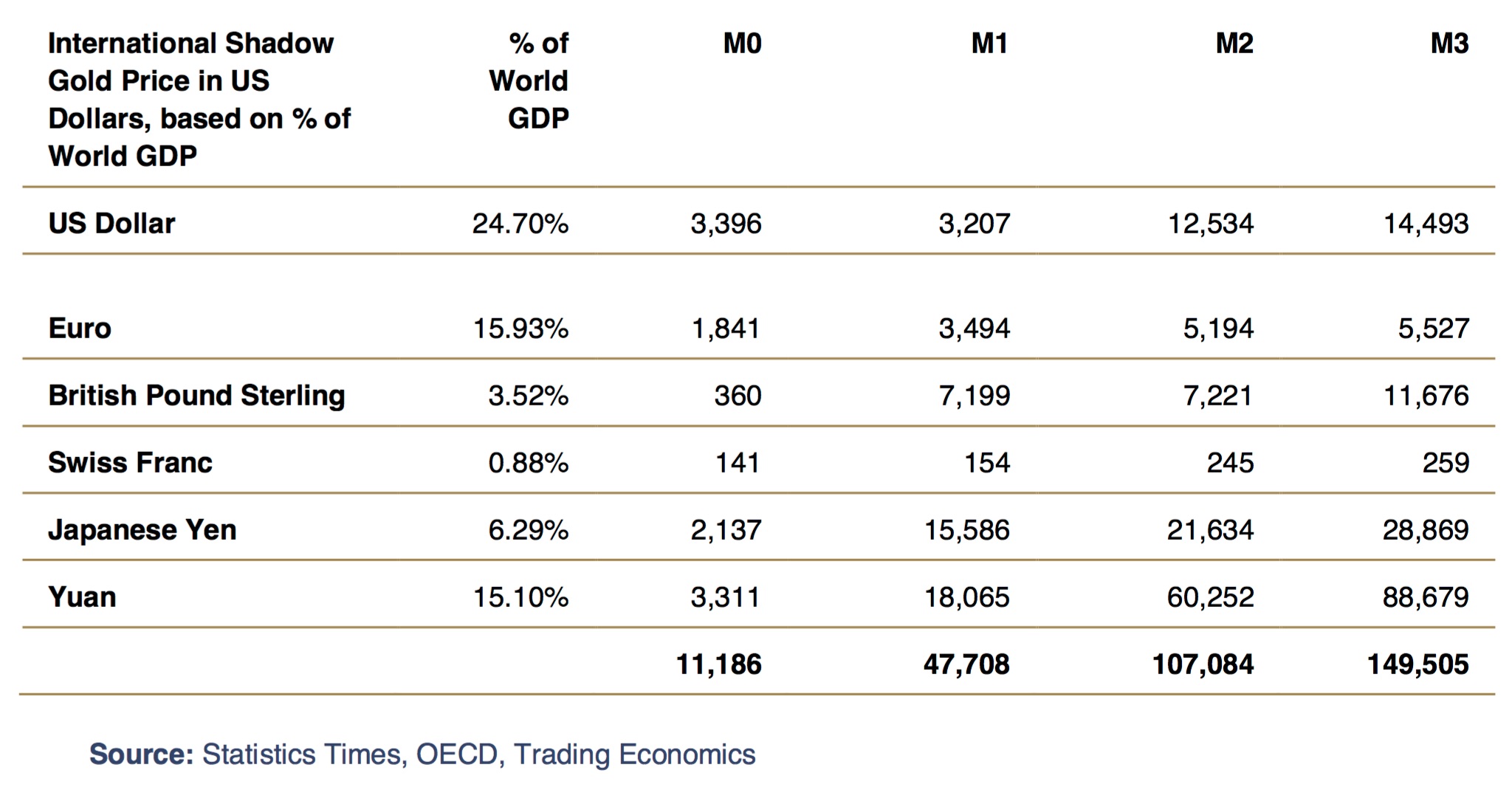 Conclusion
We want to conclude this chapter with a brilliant statement by our dear friend John Butler, Head of Wealth Services at GoldMoney, from his highly-recommended book “The Golden Revolution – Revisited”:

“Some readers might express disbelief at the prospect of a gold price of $20,000 on any relevant time-frame. I would advise these readers rather to express their disbelief at how the Federal Reserve has grown the money supply by such a colossal amount since president Nixon closed the gold window in 1971. All that we have done here is to run the numbers as they are.

The alternative to revaluing gold to the levels discussed here is to force an outright contraction of the US broad or possibly even narrow money supply, which would wreak havoc with the banking system and economy, exactly the opposite of what is needed to restore a degree of monetary stability not only to the US but also to the global economy.”

***ALSO JUST RELEASED: Yusko – “I’m telling you right now. We are going to have a crash and it’s going to be terrific.” CLICK HERE.