MARKET SHOCK: Greyerz – Next Major Move Down In Stocks Could Happen Within The Next Few Weeks

Egon von Greyerz, founder of Swiss based Matterhorn Asset Management, just warned the next major move down in stocks could happen within the next few weeks. Plus a look at inflation.

Bear Market In A Hurry?
July 6 (King World News) – Egon von Greyerz:  The next move down in stocks could happen within the next few weeks. This is likely to be a shocking move which will paralyze investors as they won’t have time to react…

Pullback In A Massive Inflationary Cycle
Peter Boockvar:  The CRB raw industrials index closed yesterday at the lowest since June 2021 but still is 34% above where it was pre covid. 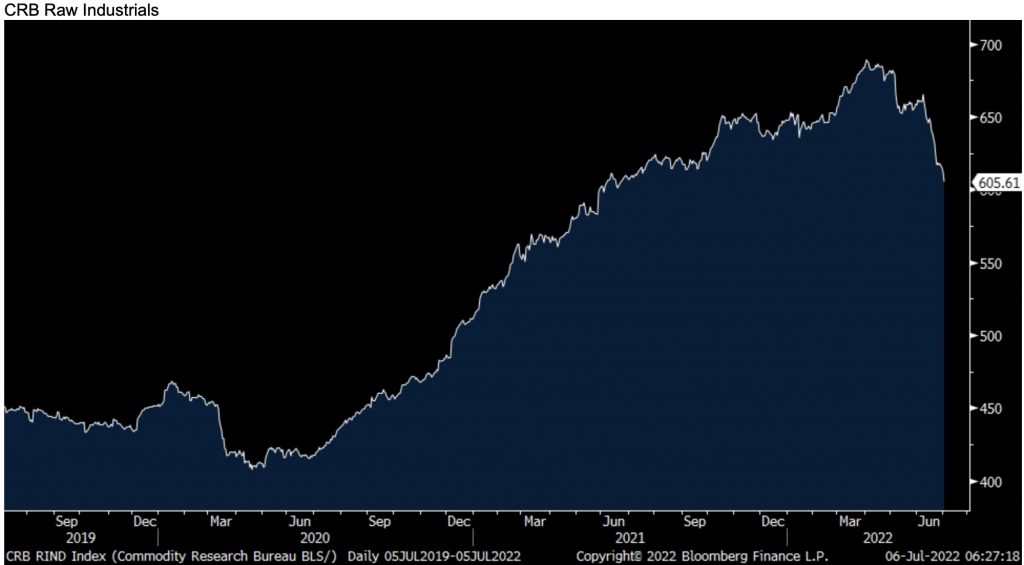 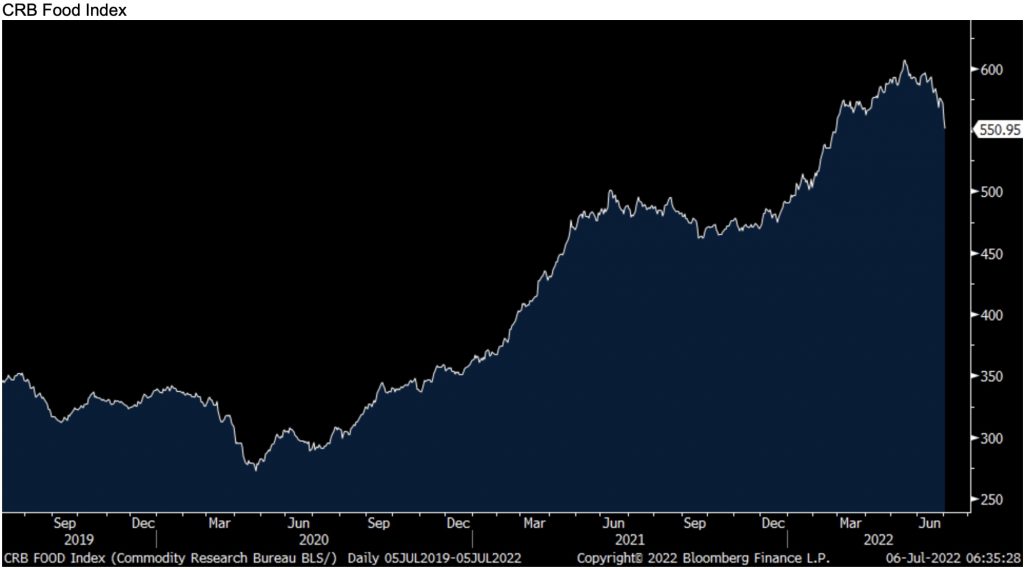 Many goods prices are falling as companies clear inventories. Bottom line, the goods side of the economy has seen the peak in this bout of inflation, as stated here before, and we’ll see to what extent continued service inflation offsets this.

Also, the reason why I highlight the increase in commodity prices post covid is that even though we are getting well needed relief right now, it doesn’t mean we’re quickly going back to the pre covid world of 1.5-2% inflation quickly. Cyclical inflation has peaked but it’s way too early to argue that there is NOT something more secular and structural to this current inflation situation. Secular, like just in time inventory is not coming back. Secular, like employees want higher wages and low cost labor overseas is more difficult to come by. Secular, like we’ve had many years of under investment in finding raw materials.

So, with this I included below a chart of CPI in the 1970’s to reflect the increases, the declines and the subsequent increases in what was an overall inflationary decade but at different paces as the years progressed. 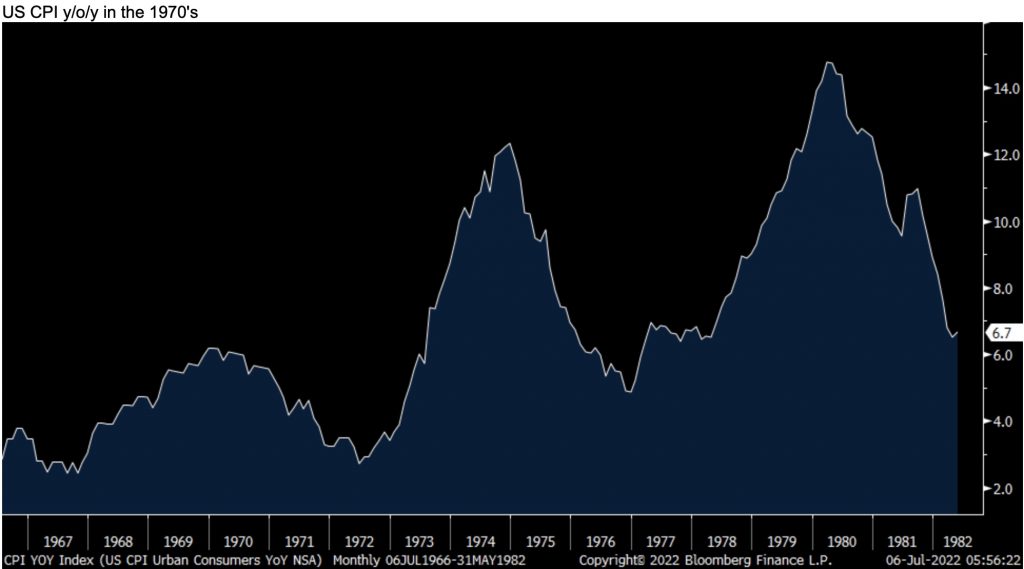 We get the FOMC minutes later from the meeting 3 weeks ago and don’t expect any new news. The Fed will continue to conduct policy with rear view mirror information and seem intent on getting the fed funds rate to a certain level first (around 3% from what they’ve said) before they wait to see the inflationary and economic response. And whether they hike 50 or 75 bps in July or get the fed funds rate to 2.5% or 3% or 3.5% eventually, they will still have us hit the economic wall as there will be no soft landing when the tightening is the most aggressive in 40 yrs. Also, even if the Fed stops at 2.5% (which was the peak in the last rate hiking cycle) because they buckle to the recession, what will they do with the balance sheet that barely has begun to shrink? I’m not sure but I’m amazed at how little people talk about QT anymore.

Yesterday the June Logistics Managers’ Index was released and it fell 2.1 pts m/o/m to 65. For perspective, the long term average is 65.3 and this is the first time since July 2020 that it is below. The all time high was 76.2 seen just 3 months ago. 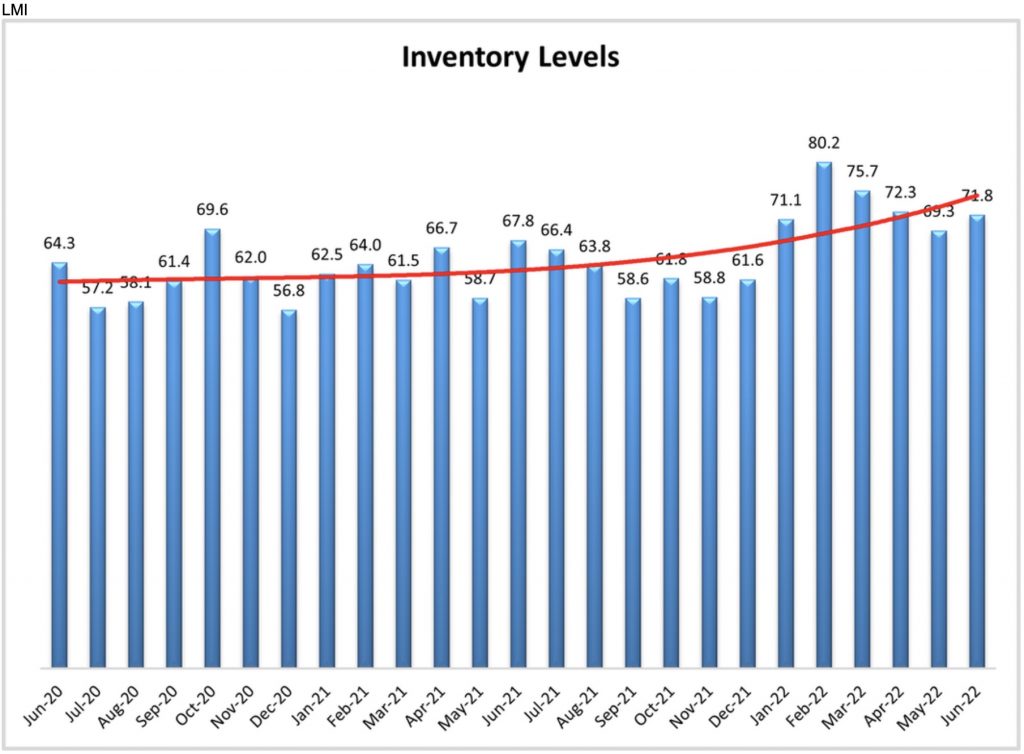 The LMI said “The steep decline is reflective of what we have seen in the overall economoy in the last three months, moving from the record-setting expansion of the last 18 months to the greatly subdued level of growth observed throughout Q2. We are also seeing a different type of growth now than we were previously. Up until 2022, we saw high demand for transportation and warehousing and difficulty building up inventories, June’s report is the opposite.” Inventories are up and transportation costs are down. It’s not all roses though as there is still a lot of congestion at the ports and which leads to the slow movement of goods deliveries. But the now a lot of this is excessive inventories still being shipped. LMI said “High levels of inventory are pervasive across multiple levels of the supply chain.”  In turn, there is a lot of need still for warehousing space.

The average 30 yr mortgage rate fell another 10 bps w/o/w but to a still relatively high level of 5.74% and mortgage apps resumed their declines. Purchase apps fell 4.3% w/o/w and are down 17.% y/o/y. Refi’s were lower by 7.7% w/o/w and by 78% y/o/y. We know the housing market is slowing sharply with respect to transactions with the only question being the impact on pricing in the coming quarters…

Not that this is relevant to the global economy but highlights the global nature of monetary tightening, the Bank of Malaysia raised rates by 25 bps to 2.25% as expected. The Romanian National Bank raised rates by 100 bps to 4.75%.

German factory orders in May came in better than expected with a .1% m/o/m slight gain but the estimate was for a .5% drop. Their stats office said “The excess demand is likely to be due to the continuing acute shortage of intermediate products. Enterprises still have difficulties completing their orders as supply chains are interrupted because of the war in Ukraine and distortions persist that have been caused by the Covid-19 crisis.” We know the challenges that the energy shock causes but China is also Germany’s largest trading partner and the stop-start situation with the Chinese economy ain’t easy to deal with. As for the persistent weakness in the euro, German exporters might like it but they won’t like the skyrocketing costs of imports and the intense pressure on the ECB in dealing with its inflationary influence.

The German 10 yr inflation breakeven is higher by almost 3 bps to 2.12%. While that is well below the peak of 2.98% seen in May, it still is double the pre covid level and obviously well above where the ECB has rates. 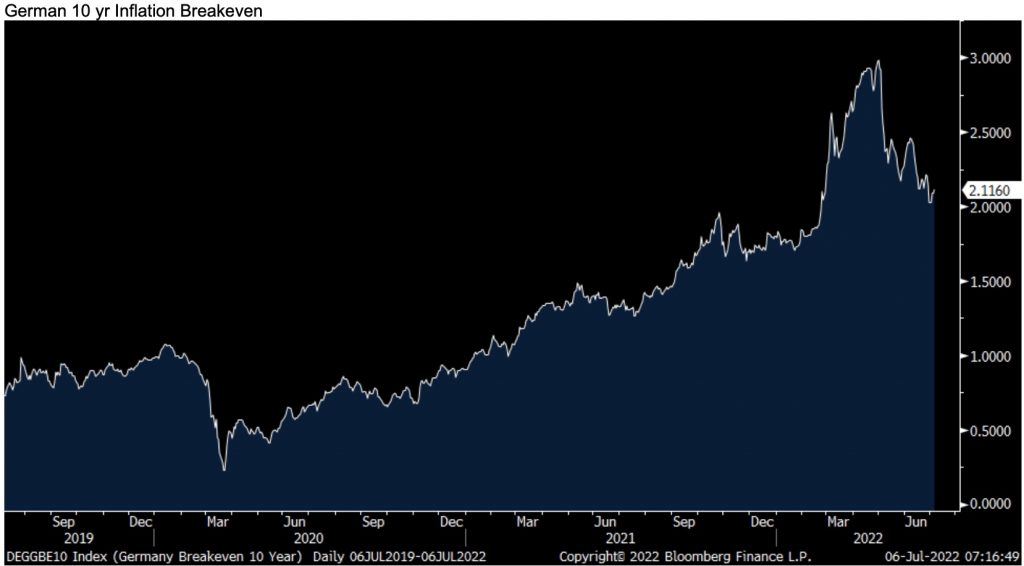 ***To listen to Matthew Piepenburg discuss why the coming collapse will be far worse than anything we’ve witnessed this century and much more CLICK HERE OR ON THE IMAGE BELOW.