Today the man who has become legendary for his predictions on QE, historic moves in currencies, told King World News this is when the global panic begins…

The Clock Is Ticking
Egon von Greyerz:  “There are lies damned lies and central bank gold statistics. Total official gold holdings are reported to be 33,000 tonnes. That is 19% of all the gold ever produced in world history. But how can anyone ever believe any of these figures. Because no central bank ever has a public audit of all its gold holdings. Since the gold belongs to the people, they have the right to know if the gold actually exists, especially since the gold reserves are backing the currency…

Egon von Greyerz continues:  “But no, the truth about these gold reserves are veiled in total secrecy. And why, you may ask? Why are the people as well as the creditors of a country not told the true financial position? What do these central banks have to hide? Let’s take the US. The US is allegedly holding 8,100 tonnes of gold, stored in Fort Knox, Denver and New York. The last official audit was 64 years ago, in 1953, when Eisenhower was president.  Since then, the US Government claims that the US gold has been audited over a period from 1974 to 2008. But no proper figures have ever been published.

FORT KNOX – WHERE IS THE GOLD? 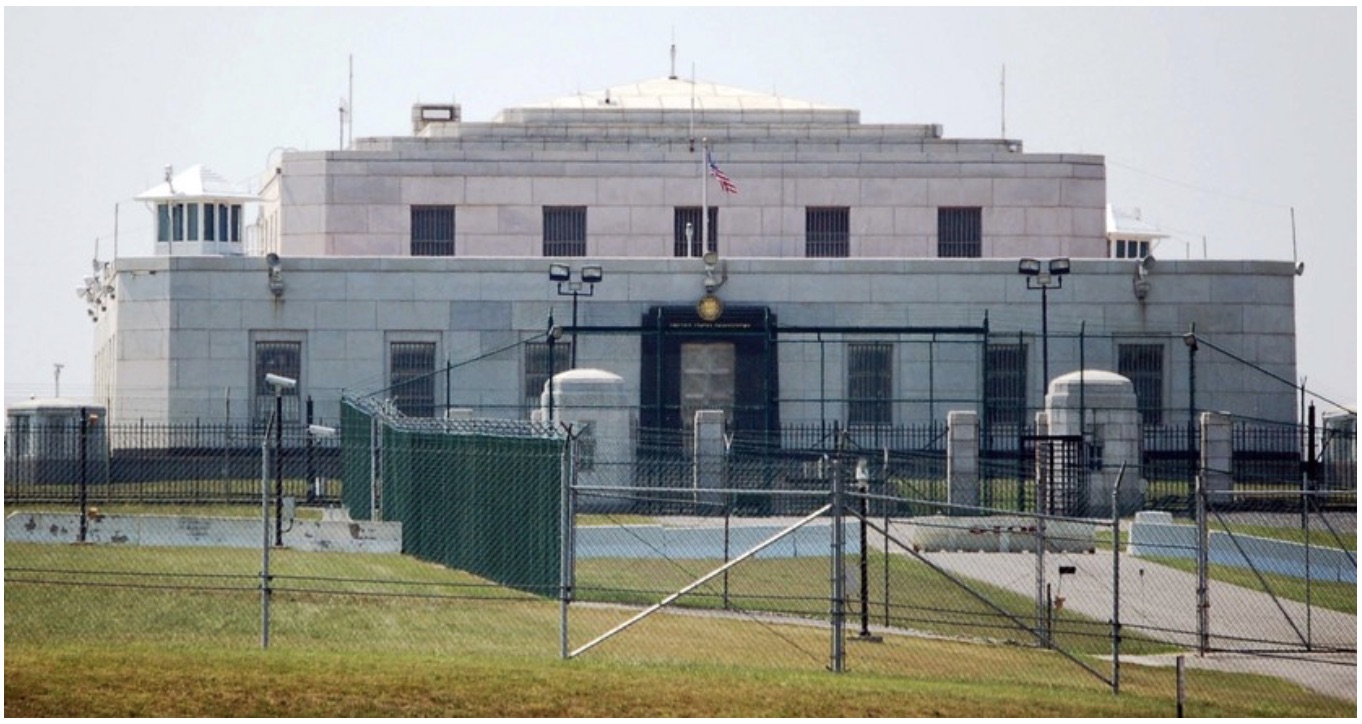 The first question to ask is, how an audit can ever take 34 years? Only a government organization can take 1/3 of a century to audit their assets.  I know of no company in the world that can take 34 years to report their assets to the shareholders. The stakeholders of the US gold are the US people and they certainly have the right to know if the country really holds $332 billion worth of gold. Steve Mnuchin, the US Treasury Secretary, spent an afternoon in Fort Knox last week. After having seen a few percent of the total gold held there, he confirmed that it was SAFE! Well that’s good to know but he obviously hasn’t got a clue how much is there.

Second, an audit carried out over 34 years cannot possibly be accurate. The movement in gold over that period would totally nullify the accuracy of the audit.

Third, an audit should be carried out by independent auditors. This audit was done by a Government Committee for Gold and the Treasury. The exact method of the audit has not been revealed but according to some sources, the methods were highly suspect.

Fourth, and just as relevant, is the total balance sheet position of the US gold holdings. The physical gold is only one small part.  Central banks practice gold lending or leasing on a major scale. Thus, the US could lease its gold to another bank against a fee. Lending can take place without the physical position of the gold changing. Other banks borrow gold from the Fed without having it in their possession. There can also be swaps, forward sales, and other derivative transactions that reduces the holding.

The Gold Is Gone
Germany used to store 70% of its gold abroad, with the majority of it in the US. In 2013, they were under public pressure to repatriate the gold and declared that 674 tonnes would be repatriated from the US and France. They only received 5 tonnes in the first year because there was no gold available. It had probably been lent to someone else. Finally, they just stated that the 674 tonnes are now in Germany. This means that around 50% of the German gold or 1,665 tonnes is still held abroad. The obvious question is of course, why not hold it all in Germany? The official reason is risk spread and trading. It is dubious if the US or the UK are safer places than Germany. Financially Germany is clearly safer. All central banks trade part of their gold. To lease gold to someone, it doesn’t have to be held in New York or London.  The leasing could easily be done from Germany.

Probably, the 1,665 tonnes held abroad have been covertly sold or leased to a bullion bank which has sold it to China. And China of course always takes delivery. They wouldn’t be stupid enough to keep a major part of their gold in the US or London. If the German gold has been leased and shipped to China, all the German government has is an IOU from a bullion bank. So instead of physical gold, they have a piece of paper.

The same could easily be the case with the US gold or other central bank gold. With the massive buying we have seen from Silk Road countries in the last 10 years, it would not be surprising that a major part of the gold has come from Western Central banks. 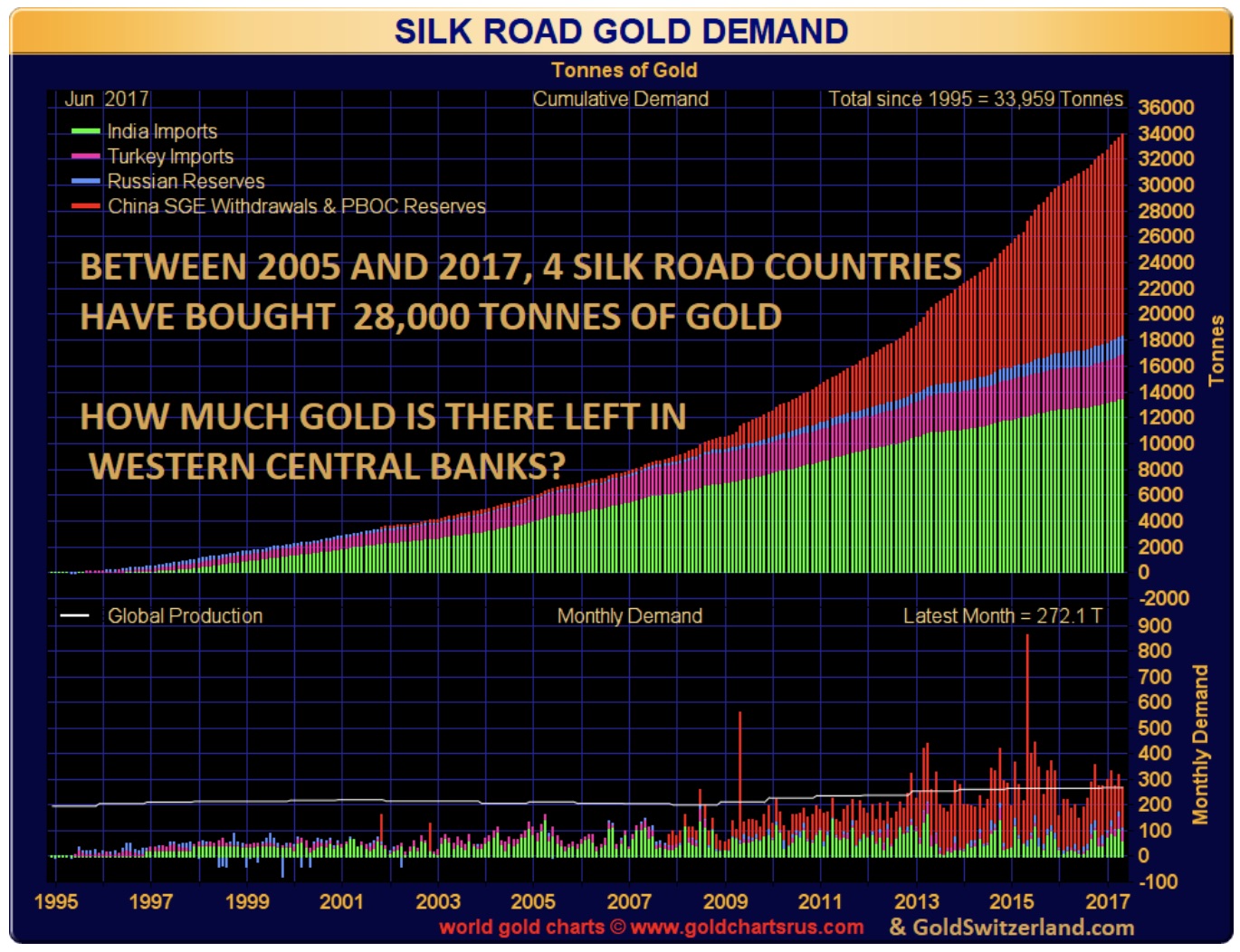 Many market observers estimate that official gold holdings could be as little as half of the reported figures. In my view, that is not unrealistic. As the chart above shows, there has been a major shift of gold from West to East. Four Silk Road countries have absorbed more than the annual gold production for the last 10 years. An important part of the sales to the East will most certainly come from Western Central bank holdings.

Western Central Bank Vaults Hemorrhaging Gold
Switzerland publishes the monthly imports and exports of gold. These give a good indication of global gold trading since Switzerland refines up to 70% of the gold bars in the world. The chart below shows the Swiss gold imports from July. Of 152 tonnes imported, 80 tonnes came from the UK. The UK is certainly not known as a gold producer. The gold that the Swiss refiners get from the UK are 400 ounce (12kg) bars, most probably sold by central banks. The bars are broken down to 1 kilo bars and then shipped to China and India. These bars could either have been sold covertly by central banks or leased by them to the LMBA banks in London. In the past, the bars leased by central banks would have stayed in London. 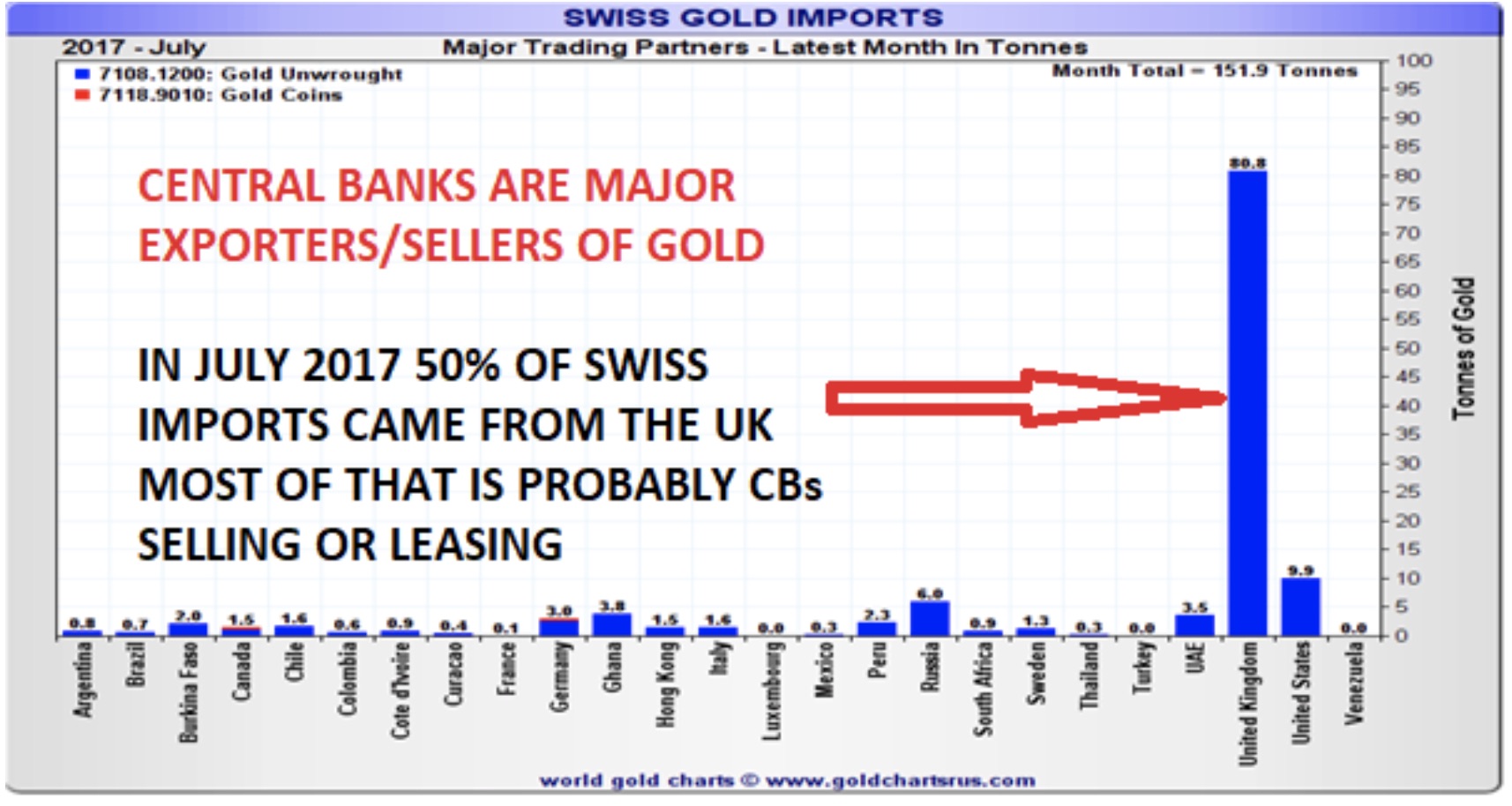 Since the Silk Road countries started to accumulate gold, the gold held by the LBMA banks in London has declined significantly. The Silk Road buyers are not content to keep their gold in London. They don’t trust the LBMA system where the same gold is lent many times over. Thus, they take delivery, which shifts the gold power center from West to East. Eastern countries, especially China, understand that gold is the only currency that will survive the coming collapse of paper money. That is why they are accumulating massive quantities of physical gold. China knows the Golden Rule:

“He who has the (physical) Gold makes the rules.”

Gold In The West Is Leveraged Several Hundred Times!
I added the word “Physical” before gold since physical possession is the only thing that counts. In the West, the vast majority of gold is paper gold which is leveraged several hundred times in relation to the underlying physical. But even physical gold held by banks is sold many times over. We have experienced many times how clients who hold gold in major banks, realize that the gold isn’t there when they want us to transfer it to private vaults.

This Is When The Global Panic Begins…
The day that gold investors holding paper gold or unallocated gold, ETF gold etc, realize that there is no gold to back their claims, the whole market will panic. At that point, the market will also understand that a lot of central bank gold has gone from West to East without anyone noticing.

The dollar bottomed in 2011, at the same time gold and silver prices peaked. In US Dollar Index terms, the dollar rallied 40% from the lows, until December of 2016. That marked the end of the 5 ½ year dollar correction. In 2017, so far the dollar index has lost 10%, but that is just the beginning. The major decline of the dollar has now started and will finish when the dollar has reached its intrinsic value of ZERO. 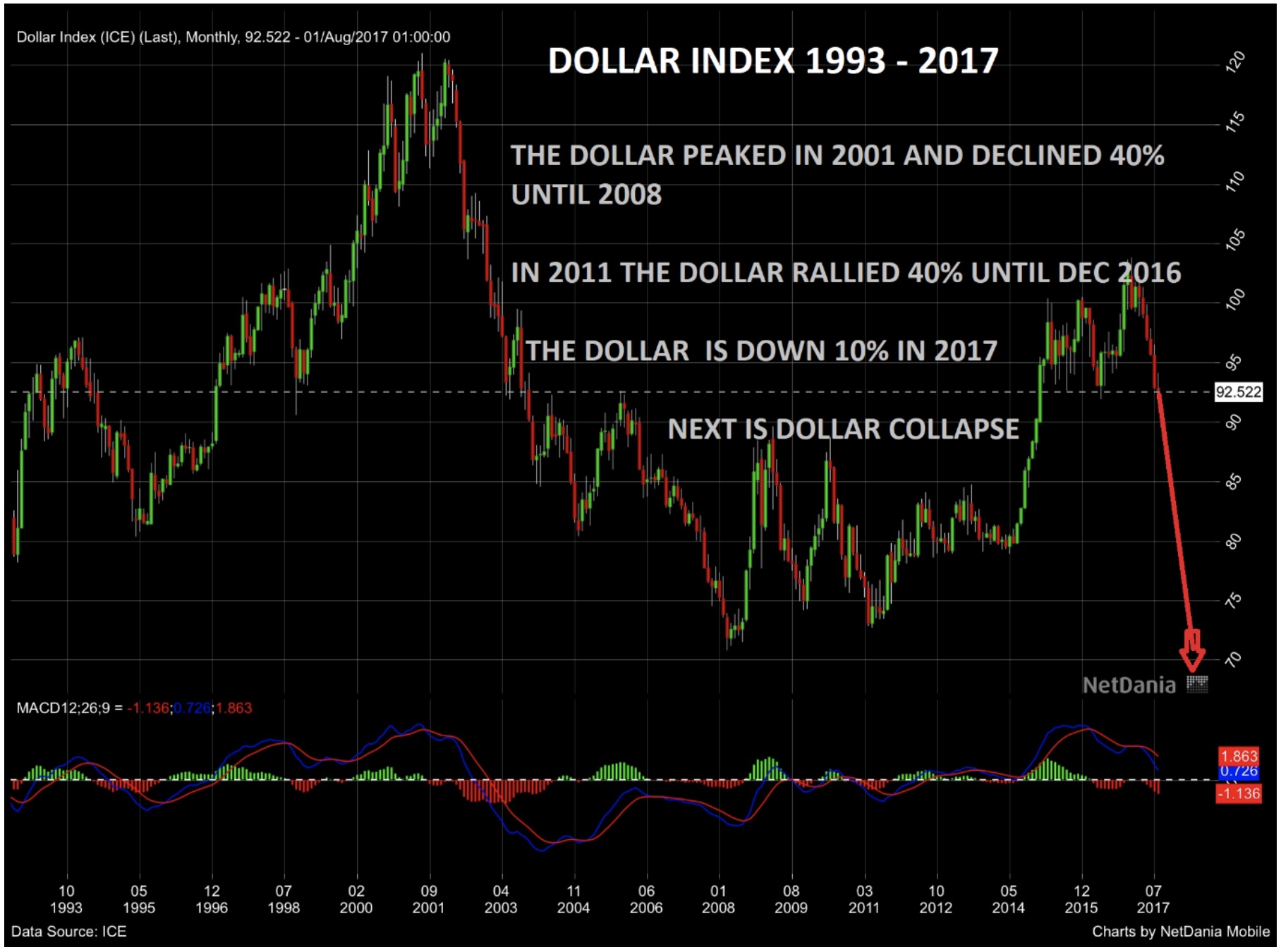 Gold temporarily peaked in 2011, at the same time as the dollar bottomed. Since 2013, gold has traded in a tight range.  At $1,300, gold is 31% below the 2011 peak. But it is only when measured in dollars that gold looks weak. In pounds, Australian or Canadian dollars, gold is only 10% from its peak (monthly close).

In 2017, gold has outperformed the US stock market and rallied 12%. It is likely that we will see a major gold rally in the autumn on the way to a new all-time high. So after a very long consolidation period — lasting six years — gold and silver will now resume the uptrend that started in 2000.

The Clock Is Ticking
The coming rise of gold and silver in the next few years will not just be the reflection of the fall of all paper currencies. Major contributors to the rise will also be the failure of the paper market in the metals and the realization that central banks possess much less physical gold than they have indicated. Therefore, physical gold and silver will continue to be the best way to preserve wealth during the coming destruction of all bubble assets such as stocks, bonds and property. But the opportunity to purchase gold and silver at reasonable prices is soon coming to an end, so now is the time to act.” Also, today King World News interviewed billionaire Eric Sprott who discussed skyrocketing silver and much more and you can listen to the remarkable KWN audio interview with billionaire Eric Sprott by CLICKING HERE OR ON THE IMAGE BELOW.

KWN has now released the remarkable audio interview with whistleblower and London metals trader Andrew Maguire discussing the US propaganda surrounding Fort Knox, an update on the upcoming 250 tonne physical order for gold and much more, and you can listen to it by CLICKING HERE OR ON THE IMAGE BELOW.