Eric King:  “Gerald, I want to bring up the two charts I know you’ve had a chance to look at that we posted at King World News:

MacroTrends:  This chart (below) shows the ratio of the gold price to the St. Louis Adjusted Monetary Base back to 1918. The monetary base roughly matches the size of the Federal Reserve balance sheet, which indicates the level of new money creation required to prevent debt deflation. Previous gold bull markets ended when this ratio crossed over the 4.8 level. 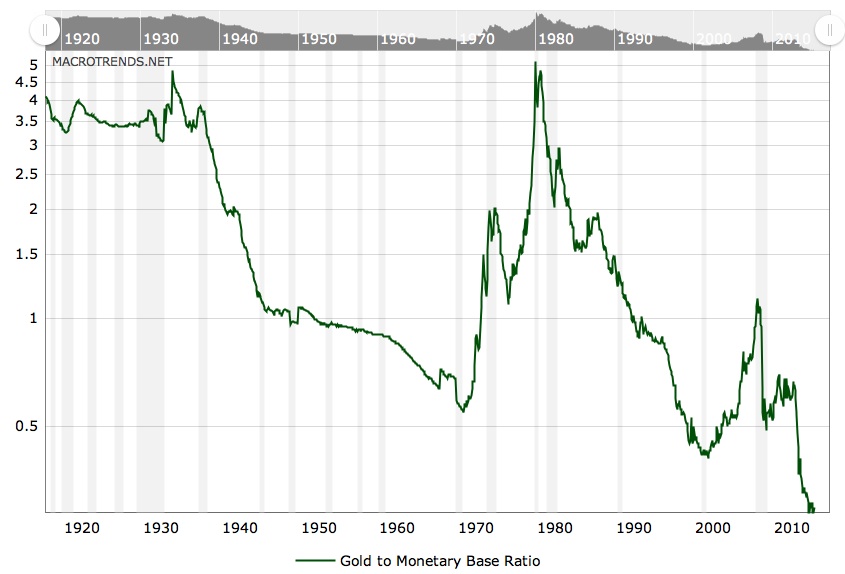 King World News note:  The chart above reveals just how far the bull market in gold has to run before it ends in exhaustion.  Gold would have to advance more than 16.5-times in price vs the monetary base in order to hit the 4.8 level highlighted above.  If the monetary base just stayed stagnant and the 4.8 ratio is hit, that means the gold price will be nearly $20,000.

King World News note on chart II (below):  There is a massive chasm between the Fed's balance sheet and today's gold price.  This is one of the many reasons the gold price is set for a historic upside surge (see chart below that is updated through June of 2015). 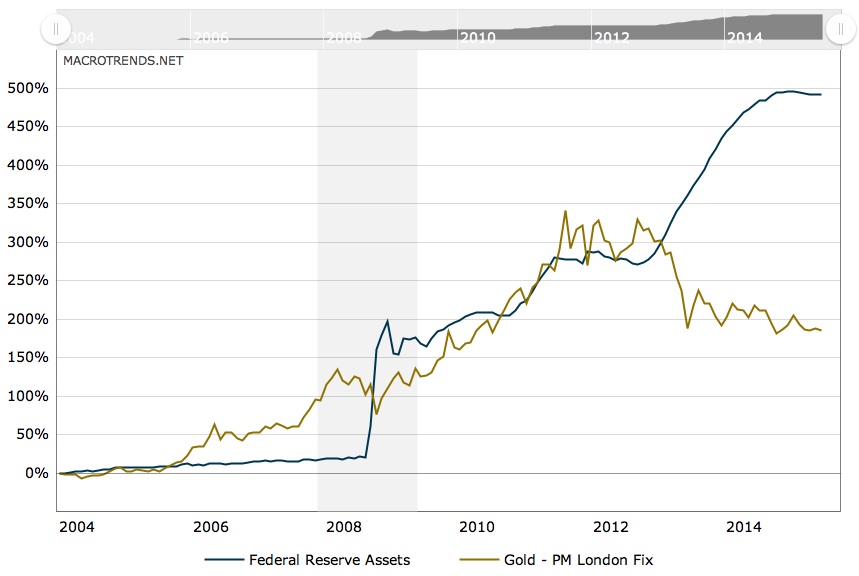 Eric King continues:  “The Chinese are obviously aware of this and I talked to John Ing about this as well.  But as you look at those great distortions, Gerald, it really gets down to something that you’ve been talking about for quite some time and that is the interference in the “fake” markets, the phony markets that are manufactured by the central banks around the world.”….

Gerald Celente:  “The charts don’t lie and the numbers don’t lie.  Wall Street lies, the Federal Reserve lies and the politicians lie for them.  And the presstitutes just keep the lie going. This unprecedented Ponzi scheme will eventually collapse.  So when we look at the chart and we see that $20,000 figure for gold, in relationship to the Federal Reserve and what they’ve been doing, here’s what we’re forecasting:

A rapid rise in gold prices, because when this Ponzi scheme collapses you are going to see spikes up in gold that mirror the charts that you put up there, and the spikes up in all the fake money that they’ve been printing.  Gold is going to follow it identically.

So of course the Chinese and the Russians are buying it (gold) up.  And as it is pointed out very concisely and clearly by John Ing (in his KWN interview), the Western press is nothing more than a propaganda outlet (spewing out anti-gold misinformation) to keep gold prices down.

Eric, we just had a conference here at Colonial Kingston the week of June 6th.  One of our keynote speakers was Nomi Prins, who wrote the book All The President’s Bankers.  Two days before our conference she was a keynote speaker at the Federal Reserve.

What She Told Me Is Terrifying

They invited her and she spoke to members of the Federal Reserve, the IMF and the World Bank.  I asked her:  ‘Nomi, what’s the one big thing that you learned?’  She said:

“I learned that they don’t know what they are doing.  They don’t have a clue.  They are in uncharted waters and they are faking it.”

So John Ing is right on target.  Is $20,000 (gold) on the horizon?  I don’t know.  But what we’re saying is that when this Ponzi scheme collapses, gold is going to go beyond the level it hit at the high in 2011 and start trading way above $2,000 an ounce.” ***KWN has now released the extraordinary audio interview with Gerald Celente, where he discusses the coming collapse, why gold is going to skyrocket as well as what the world will look like in the aftermath of the coming disaster what surprises, and you can listen to it by CLICKING HERE OR ON THE IMAGE BELOW.

***ALSO JUST RELEASED: This Fantasy Is Going To Have A Brutal Ending – What's On The Other Side Of This Will Be Depression-Like Conditions CLICK HERE.