On the heels of another chaotic trading week in major markets, today one of the top economists in the world sent King World News an incredibly powerful piece warning people to expect disaster for markets and economies worldwide and chaos on a global scale.  Below is the fantastic piece from Michael Pento.

May 16 – (King World News) – Central banks are incapable of saving economies or creating growth. The only thing a central bank can do is create inflation. These market manipulators set forth on a journey seven years ago to save the world by engaging in massive monetary manipulation, euphemistically called Quantitative Easing (QE), and a zero interest rate policy known as (ZIRP)….

As I could have told them, all this easy money failed to create real growth. The economy, held back by massive debt levels, initially clocked in at 0.2% for the first quarter. This number is set to be revised down to negative territory due to a huge increase in the trade deficit during March. And the second half isn’t setting up to be much better.

But the Fed was successful in re-inflating the housing and equity bubbles and creating another new massive bubble in the bond market.

Despite tepid growth, most at the Fed have become eager to wave the “Mission Accomplished" banner and to move toward interest rate “normalization.” Ceremoniously, they have set goals for the economy to reach in order to begin that long journey: unemployment around 5% and inflation at 2%.

As the Fed’s luck would have it, discouraged would-be workers have dropped out of the labor force and many employees have found it more profitable to sit home than to work, which has allowed the unemployment rate to approach the Fed’s target. The unemployment rate has finally returned to the 2008 bubble level of 5.4%. But when we look more closely, (at the chart below) employment-to-population ratio is nowhere near where it ought to be. 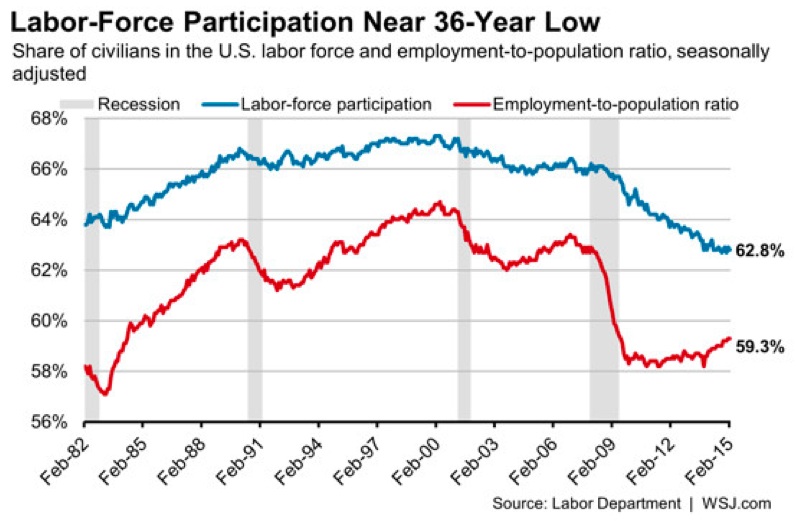 But those at the Fed stand determined to never let real data points get in the way of the narrative that printing money saved the economy. In fact, San Francisco Fed president John Williams was recently touting a new way to calculate GDP that he called "GDP Plus." It appears when you take out everything he defines as “noise,” first-quarter GDP would have come in at exactly 1.7%. Perhaps a better term would be "GDP Minus": GDP minus all the things we wish didn’t happen in the economy this quarter.

Now the only thing hampering the Fed’s path to rate normalization is the “too-low” rate of inflation — the inflation resulting from unprecedented money printing and years of ZIRP that caused massive stock, bond and real estate bubbles doesn’t count in the government’s inflation indices. Nevertheless, the official core CPI number used to measure inflation appears at the moment to be “just right.”

And for a brief moment, if we dismiss those asset bubbles, ignore discouraged workers, cherry-pick economic data points and squint a little, we can be deluded into believing the economy has reached Goldilocks Nirvana…or even Goldilocks Nirvana plus. But before Goldilocks reaches for her porridge, she may want to pay closer attention to what the bond market is telling us.

What The Bond Market Is Telling Us

For the past seven years, investors didn't have to worry about credit risk because central banks were ready buyers, regardless of a nation’s insolvent condition; as long as inflation was thought to remain quiescent. But here is a news flash–investors won't own sovereign debt if real interest rates plunge much further into negative territory. And investors won't accept negative real and nominal yields on fixed income if they can instead own precious metals, commodities, real estate, or any other hard asset.

Here Is The Danger

But here is the rub; once inflation becomes a problem, central banks will then become sellers instead of buyers of bonds and principal depreciation will quickly erase the paltry yield away from investors.

And here is where it gets interesting: the Headline CPI is down 0.1% YOY in March, but the core rate of CPI is up 1.8%–coming very close to triggering the Fed’s “return to normalization” target. A steep decline in the price of oil that began in the summer of 2014 has dragged the overall CPI number down.  But gas prices have risen over 30% since the January lows. And the effect of the energy price collapse on the headline number starts to diminish in July, and is completely erased by the end of the year.

Therefore, very soon the Fed should be confronted with all the data points it previously mapped out in order to start raising rates. But perhaps the central bank should be careful about what it wishes for. This is because seven years of interest rate suppression have created a powerful vacuum that could suck higher long-term interest rates in accelerated fashion.

This Will Bring The Economy To Its Knees

Despite years of QE and ZIRP, the economy is still scraping along the bottom. If the Fed were to raise the cost of money above the one percent level, it will bring this bubble-addicted economy to its knees, as it provides the pin to the bubbles in real estate and equities. The growth rate in broad Money Supply (M3) has been falling from 9% in 2013, to just 3% today.

Therefore, when short term interest rates rise it is also very likely that the yield curve will invert and cause money supply growth to turn sharply negative; just as it did during the Great Recession. This is precisely because the long-end of the yield curve has been artificially suppressed for so many years. Longer-dated maturities could discount even slower growth ahead, and the yield curve would quickly invert from its already compressed starting point.

As previously explained, if I'm wrong about the yield curve flattening after the Fed starts hiking rates, it will only be the result of the market losing complete confidence in the US tax base to service Treasury debt and for global central banks to keep inflation in check. This would occur if the Fed decided to hike rates just once and then sit on its hands for a long time. The Fed’s prolonged “patience” in hiking rates further would soon lead to that intractable rise in US long-term rates and result in a complete disaster for markets and economies worldwide.

Whether long-term interest rates rise or fall when the Fed begins its exit is still in doubt—it all depends on the slope of the Fed Funds rate. However, the only sure outcome is chaos on a global scale. Such is the inevitable result of the massive and historic intervention of central banks into the sovereign debt market. Therefore, no matter what happens to interest rates in the future you can be sure of one thing…the suffering will be immense. To learn more about Michael Pento’s financial management services CLICK HERE.  You can also sign up for Michael Pento's weekly podcast at his website.

***KWN has now released the tremendous audio interview with David Stockman and you can listen to it by CLICKING HERE OR ON THE IMAGE BELOW.

***KWN has now released the tremendous audio interview with legendary Robert Arnott and you can listen to it by CLICKING HERE OR ON THE IMAGE BELOW.

***ALSO JUST RELEASED: David Stockman – We Are Now Entering The Terminal Phase Of The Global Financial System That Will End In Total Collapse CLICK HERE.