As we get ready to what should be a very exciting fall, one firm is calling for a significant upward revaluation of gold.

September 14 (King World News) – In order to prevent a credit collapse, which would be fatal for the monetary system, central banks have tried to cushion the global financial crisis by an even more expansive monetary policy. The Fed lowered the federal funds rate to zero at the end of 2008 and started the first QE program. The so-called wealth effect played a crucial role: Consumers were supposed to feel better on account of rising share prices, and be tempted to increase their spending…

However, since this is essentially nothing but a continuation of the policy that has led to the crisis in the first place, its prospects for enduring success are negligible. Problems were merely postponed: What turned out to be unprofitable hasn’t been liquidated, but has been kept on artificial life support and even expanded. Unconventional monetary policy has only resulted in a further inflation of asset prices and has raised the level from which they will inevitably drop.

The following chart demonstrates that the trend of the S&P 500 Index depends strongly on continual inflows of cheap money: After the end of QE1 and QE2 the S&P 500 declined and only regained its upward momentum once the Fed indicated that another round of QE was in the offing. The exit from QE3 was then implemented in a less abrupt manner via “tapering”. 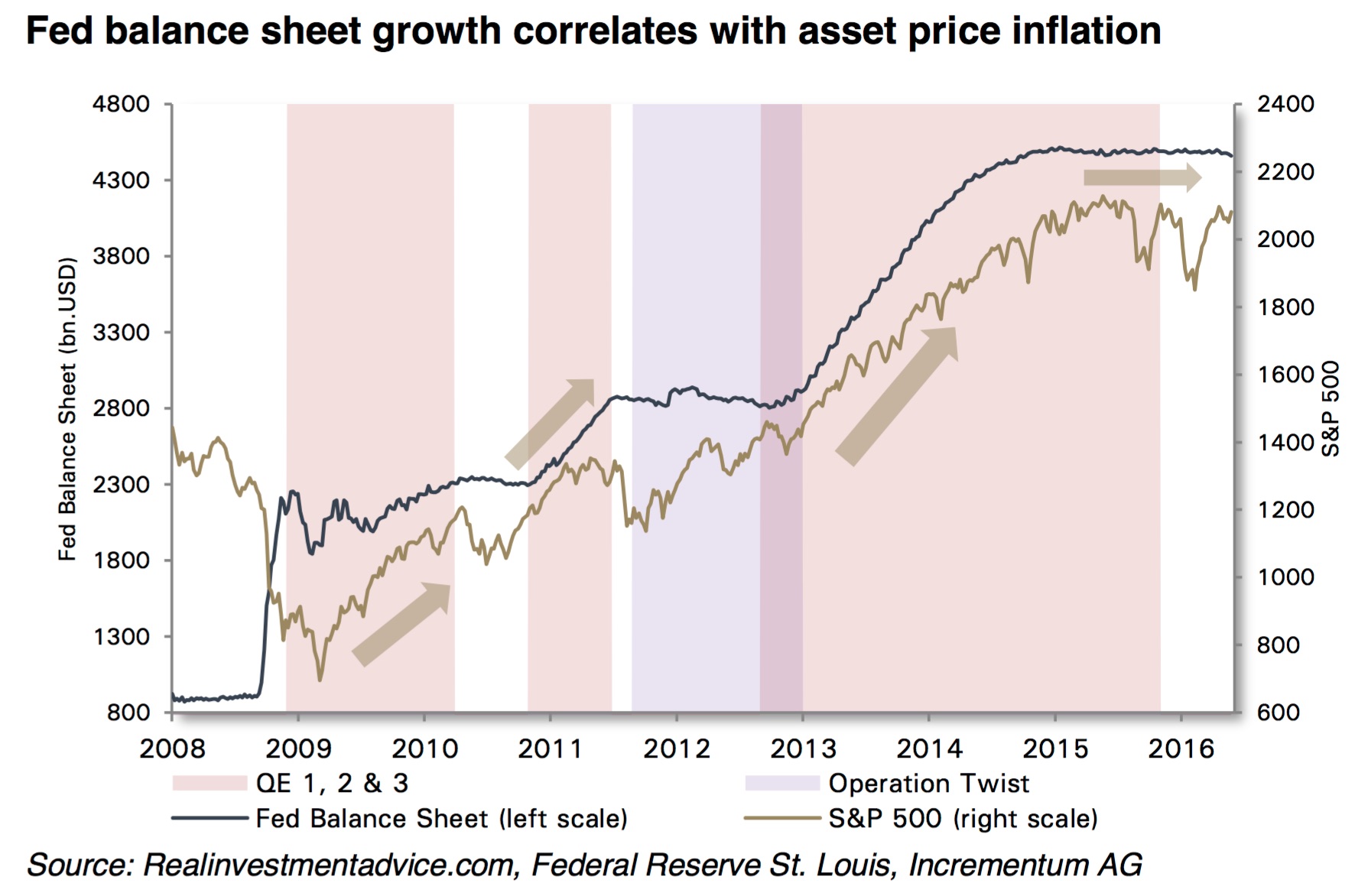 Will the Fed be able to successfully return to monetary normalcy without affecting asset prices? Is the economic recovery self-supporting and is it able to withstand tighter monetary policy?…

Tapering at the end of QE3 was de facto already the first step of a tightening policy. The small rate hike in December 2015 was the second step. As a result stock markets have become volatile: Since the publication of our last report, there have already been two significant stock market corrections.

Thus, we presently find ourselves in the following situation:

Conclusion:
Similar to the legendary Damocles, whose life was threatened by a sword held up by a horse’s hair, a decline in asset prices nowadays represents a latent threat to the fragile economic recovery.

Gold delivered the strongest quarterly performance in 30 years in the first quarter of 2016. Many technical indicators and sentiment gauges suggest that gold has gone through a classical cycle, which reached its low point last year amid maximum pessimism with a final wave of panic selling.

Our analysis confirms the view we have already expressed in last year’s report: A significant advance in the gold price is to be expected. Our price target of USD 2,300 for June 2018 may appear ambitious. We are firmly convinced though that systemic problems will increasingly lead to a critical reassessment of the current monetary order. In the event of such a paradigm change, a significant upward revaluation of gold seems highly probable.

***Also just released: What We Just Witnessed Is A Rarity In The Past 54 Years CLICK HERE.