With continued uncertainty in global markets, today a 50-year market veteran warned King World News that the world is now facing the most frightening and dangerous crisis in modern history.  He warned people not to listen to the mainstream media, which is pleading with the public to “stay the course.”

John Embry:  “Gold and silver prices had a spectacular day on Friday, after a completely orchestrated takedown in the wake of that pathetic FOMC release.  That release was just pure fiction.  It is a total fallacy that the U.S. economy is stronger.  Regardless, silver and the shares are acting quite well….

Right now I am just waiting for the major breakout in gold.  I won’t be happy until I see the gold market break away from all these control mechanisms.  All of this is designed to contain enthusiasm for the metals and it’s worked spectacularly.  Money has been created out of thin air in huge quantities over the last few years but you would never know it looking at the prices of gold and silver.

Lyndon B. Johnson And An Out Of Control United States

Lyndon B. Johnson was featured in a movie I watched over the weekend and in it he was talking about his war on poverty.  But in my opinion that is when all the problems in the United States really got started — when they tried to engage in a war on poverty and also conduct the Vietnam War.

As a result, the finances of the United States started to get out of control and they were running significant trade deficits and flooding the world with dollars in the late 1960s.  As you know, Eric, in those days the U.S. dollar was backed by gold and foreign central banks were permitted to turn in their dollars in exchange for gold.

That move to exchange dollars for gold really began to pick up steam in the late 1960s and into the very early 1970s, led by Charles de Gaulle of France.  This led to President Nixon’s historic decision to shut down the gold window.  That put the entire globe on a purely fiat currency system and the great Ponzi scheme the world is living with today was born.

We then saw an incredible bull market in gold in the 1970s as inflation soared, but the debt wasn’t really out of control at that point.  When Ronald Reagan became president, at the beginning of 1981, the entire funded U.S. debt was $960 billion.  He (Reagan) crushed the Russians with a military spending race.  But this had the effect of putting the U.S. financial system under the gun, as the funded debt rose to $3 trillion. 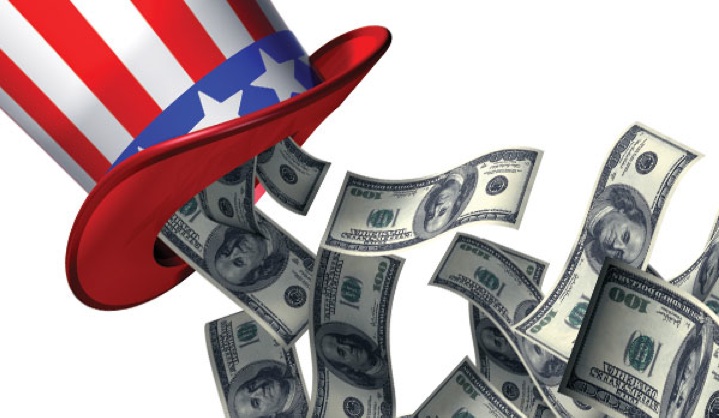 Out Of Control U.S. Floods The World With Trillions Of Dollars

Any pullbacks in stocks since that time have been met with whatever amount of money printing has been required to prevent it.  Well, because the inflationary psychology had been crushed at the beginning of the 1980s by Volcker, most of the money being created has gone into financial assets.  This has created massive financial asset inflation.

But things got really out of control when the tech bubble burst in 2000.  At that point the Fed really began to throw money at the problems the U.S. was facing.  This was then followed by the 2008 collapse, where they literally threw trillions of dollars at it.

Dangerous Territory – Fed Out Of Ammo

Now here we are and the Fed is out of ammo and I believe the problems are more intense today than they have ever been.  The mainstream media is now pleading with the public to “stay the course,” because “everything is fine.”  But today the financial system is more fragile, the economy globally is headed into a recession, if not worse, and the geopolitical situation is continuing to deteriorate into extremely dangerous territory.

The bottom line is that the world is now facing the most frightening and dangerous crisis in modern history. This is why KWN readers around the world must protect themselves with real money — physical gold and silver.  And as I said at the outset:  I’m impressed with the fact that this is idea is catching hold and the market now has a different feel to it.” ***ALSO JUST RELEASED: Could The Price Of Gold Really Spike 70 Percent In The Next 90 Days? CLICK HERE.