With the trade war ramping up, here is where things stand in major markets.

S&P 500 Nearing a New All-Time High
August 8 (King World News) – From Andrew Adams at Raymond James:  Despite the prevalent fear plaguing investors in recent months, the S&P 500 came within 10 points yesterday of hitting a new all-time high. If the index does make it over 2872.87, it will join both the NASDAQ and Russell 2000 in bettering the peak hit in late January prior to the broad market sell-off. For now, the S&P 500 remains in the resistance zone we have discussed in recent weeks, but as Jeff Saut has repeatedly said during this multi-month consolidation, we expect new highs to follow. Also, it is interesting to note that the index has now filled the January 30 gap down. While gaps don’t always fill, they do often seem to act as a target for prices to return to.

Broad Stock Market at New All-time High
While it won’t get the fanfare of the S&P 500 or DJIA hitting a new all-time high, yesterday the Wilshire 5000 Total Market Index did reach a new milestone. The Wilshire index no longer actually contains 5000 companies (it was ~3500 companies at the end of 2017), but it does represent all the actively-traded stocks in the United States market, so this is a big deal.

Transports at New Reaction Highs
Meanwhile, the Dow Jones Transportation Index isn’t yet at a new all-time high, but it is making new reaction highs and is back to trading at its highest level since late January. Another positive sign. 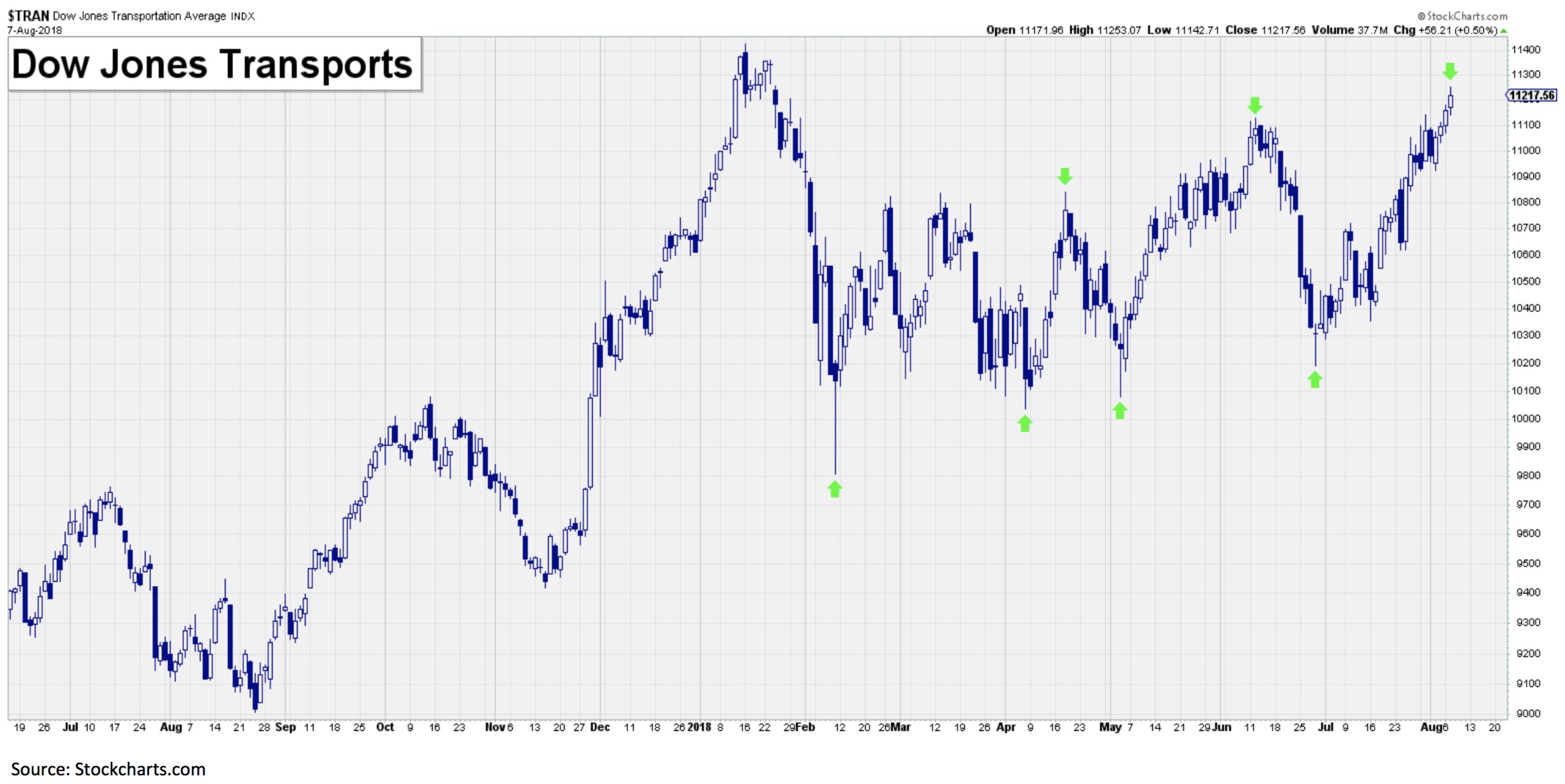 Growth Has 12-Year Trend Supporting It
Coming off the Dot-Com Bubble, the Russell 3000 Value Index enjoyed about a six-year period of outperformance versus the Russell 3000 Growth Index. Since mid-2006, however, the trend has clearly been in favor of growth with only a few meaningful exceptions. 2009, 2012, and 2016 were really the only calendar years when it was worth overweighting value, and that’s not too surprising considering that those years followed more significant declines in the broad market in 2007-2009, 2011, and 2015-2016 when the Russell 3000 Index, itself, fell at least 15%. These corrections may have resulted in more attractive value opportunities of which to take advantage. 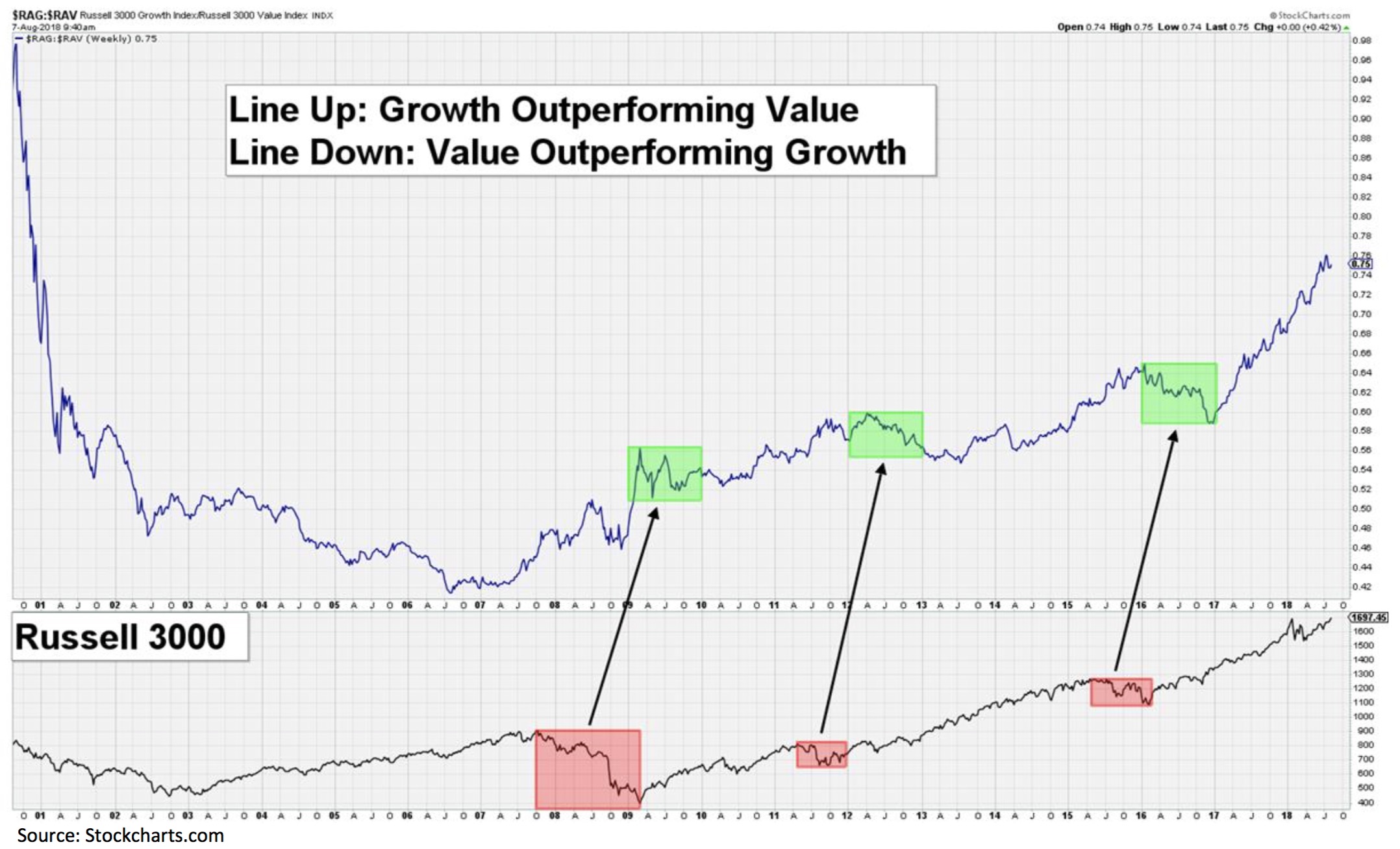 10-Year U.S. Treasury Yield Remains Below Resistance Zone
Nothing much new to mention with respect to the benchmark 10-Year U.S. Treasury yield. It has once again been rejected near the 3.0% resistance zone yet refuses to be knocked down too much. We continue to believe it’s only a matter of time before it breaks out to the upside again.

Real Estate in Focus
We have seen quite a few articles recently about a slowdown in various housing markets in the United States, but so far the broader U.S. REIT sector is not showing major weakness. However, as we have noted previously, the MSCI U.S. REIT Index remains just under what has been a heavy resistance zone over the last year plus, and it will likely be difficult to see strong performance out of REITs unless the group can prove it can climb above this resistance area. 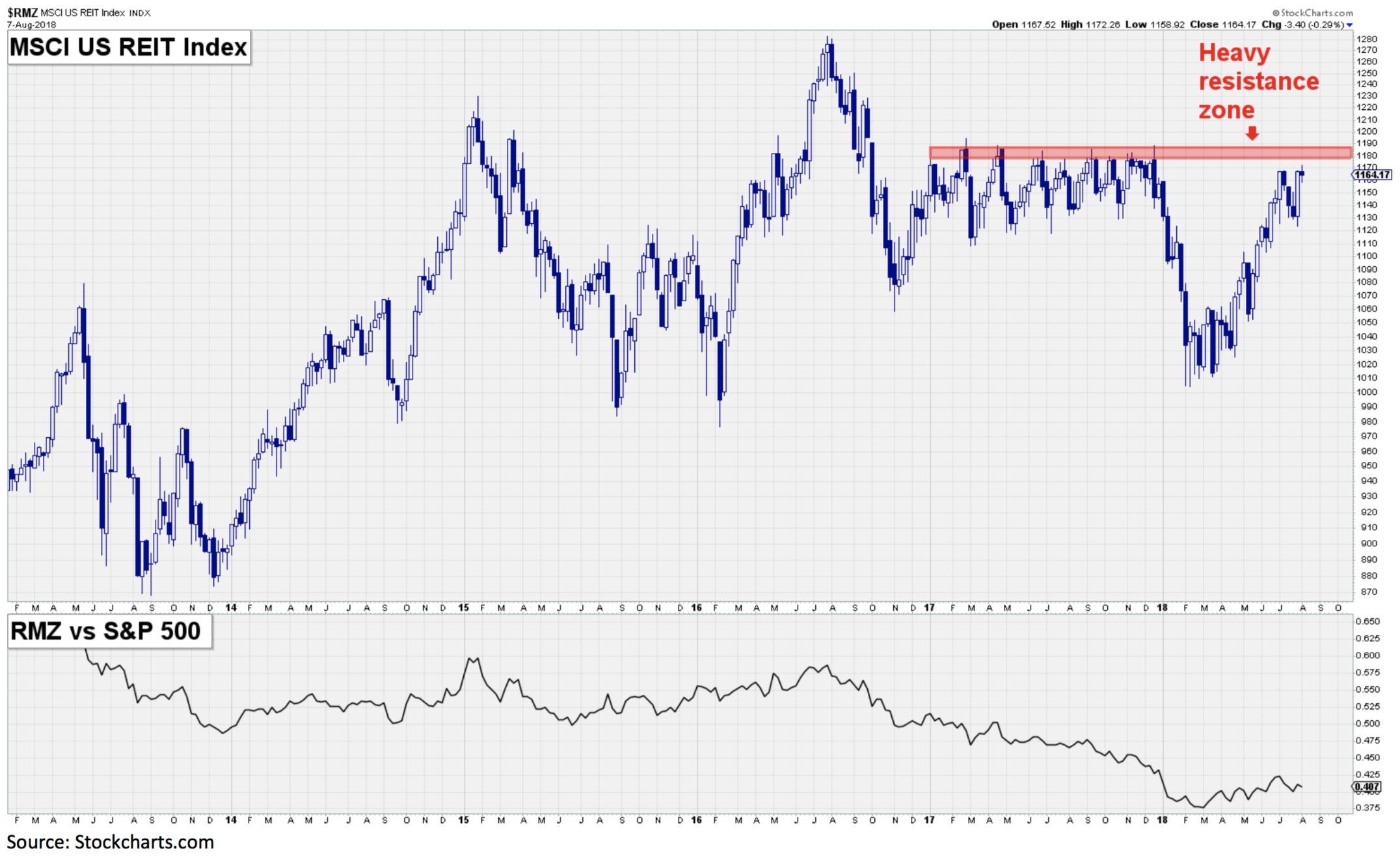 U.S. Dollar Index on Brink of Breakout?
We have written about the consolidation in the U.S. Dollar Index a few times in the past couple of months, but it appears the dollar may be getting ready to take a shot at the upside of that trading range. The 95.25-95.50 zone is the one to watch, as the index has not been able to close a day above 95.25 during its back-and-forth movement since June. A higher dollar, if recent past is prelude, should benefit small cap stocks at the expense of large caps.

China Still an Opportunity for Aggressive Accounts
Naturally, China’s stock market has been under pressure with all the trade policy uncertainty this year, and many investors still want nothing to do with the world’s second largest economy. Yet, as we mentioned in early July, the Shanghai Composite Index has been beaten down close to long-term support, and it may offer an attractive opportunity for those willing to take the risk. Chinese stocks will continue to be volatile as long as we have the tariff threats, but with sentiment very negative and a possible double bottom forming above support, it may be worth a shot.

ALSO JUST RELEASED: This Is How Bizarre Things Have Gotten In The Gold Market CLICK HERE TO READ.

BUCKLE UP: Greyerz – The Dark Years For The World Are Now Starting In Earnest