With continued wild trading action across the globe, today King World News spoke with the man who recently had a fireside chat with billionaire Frank Giustra.  On the heels of his recent meeting with Giustra, he discussed a scenario that he believes will be the catalyst for $500 silver and $10,000 gold.

Egon von Greyerz:  “Eric, a couple of weeks ago the Swiss National Bank managed to reject the gold initiative through massive propaganda, claiming that people would lose their jobs because of a strong Swiss franc.  Well, the Swiss franc has been getting very near to the 1.20 peg again.  The Swiss National Bank, fearing the peg would break, has now initiated negative interest rates of .25 percent.  They also promised to buy unlimited amounts of euros….

"So what has happened, Eric, is that Switzerland today doesn’t have a currency of its own.  The Swiss franc is just an adjunct to the euro and the policy is determined by the ECB.  This will lead to massive money printing as the euro weakens, and the euro will weaken because the eurozone economy is much weaker than the Swiss economy.

At some point the peg will break anyway, but before that the Swiss National Bank will have printed hundreds of hundreds of billions or more of Swiss francs in order to defend the peg.  They already have the biggest balance sheet relative to any country in the Western world.  Of course the next step will be that the Swiss banking system will be in trouble.

The Swiss banking system is 7-times GDP and has a much greater derivatives exposure.  So that will lead to even further money printing.  So sadly Swiss banks today are not safe, but many other banks around the world are in even worse condition.  Look at JP Morgan, which has almost $100 trillion in derivatives, or Deutsche Bank with its 50-times leverage.  It’s the same all over the world.

And the domino effect of a few major banks in trouble or failing will make all banks in the world unsafe.  That’s why it is so important that investors get money out of the system.  Of course physical gold and silver are the best protection, especially at these bargain prices.  As I have already said, gold will go to at least $10,000 in today’s money and silver to $500.  These are my minimum targets.

Eric, I agree with what James Turk said in his KWN interview this week regarding who owns the gold.  He mentioned Gunvar, the commodity trading firm, which stopped trading gold because they can’t determine where the gold actually comes from.  I’ve often said that if you buy gold from a major bank it could be encumbered and belong to a central bank.

Therefore if you buy gold from banks, one day the central bank may decide that they are going to claim their gold back.  That’s whether you store it in the bank or you take it out.  This is why we buy freshly cast or minted gold directly from the refiners because that way we know it can’t be traced back to a central bank.

There is so much central bank gold in the system that has been lent by bullion banks and then eventually bought by some other bank.  The problem is that central banks one day will most likely reclaim that gold and simply give the holders of the physical gold an IOU.

Interestingly, gold in rubles is up almost 12-times in price since the year 2000.  Gold is trading 30 percent above the 2011 high in ruble terms. 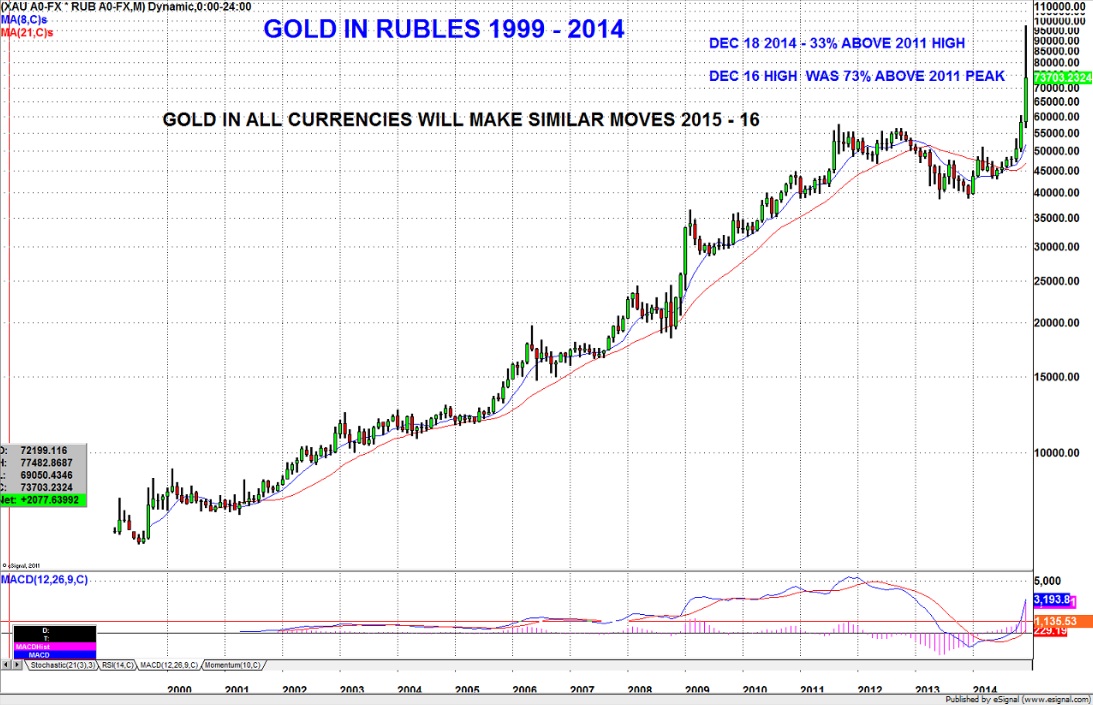 This is what will happen eventually in all currencies.  Gold priced in yen is on its way to new highs and all other currencies will follow.

Very soon gold will break out above the 2011 high in all currencies.  Looking at Russia, David Cameron made an amazing statement this week.  He said that ‘Russia is not fit to be part of an international system.’  First of all, I’m not sure Russia wants to be part of the rotten system that we have in the West.

But let’s look at the facts:  Russia’s Debt/GDP is 14 percent.  In the U.S., for example, it’s 105 percent.  Russia has a current account which is positive and the estimated surplus for this year is $70 billion.  If you look at the U.S., it hasn’t had a current account surplus in over 50 years.  Russia also has Forex reserves of $400 billion, and the maximum debt service for all Russian debt in 2015 is $100 billion.

So Russia will have no pressure in the coming year and probably not past that time frame either.  Russia also has massive natural resources and a people who are used to hardship.  So in my view Russia will survive this.

Turning to the U.S. markets, the Fed doesn’t know what to do and their policies are totally reactive.  The graph of short-term Treasury yields below shows that there is no policy, just wild swings based on the state of the economy and the markets. 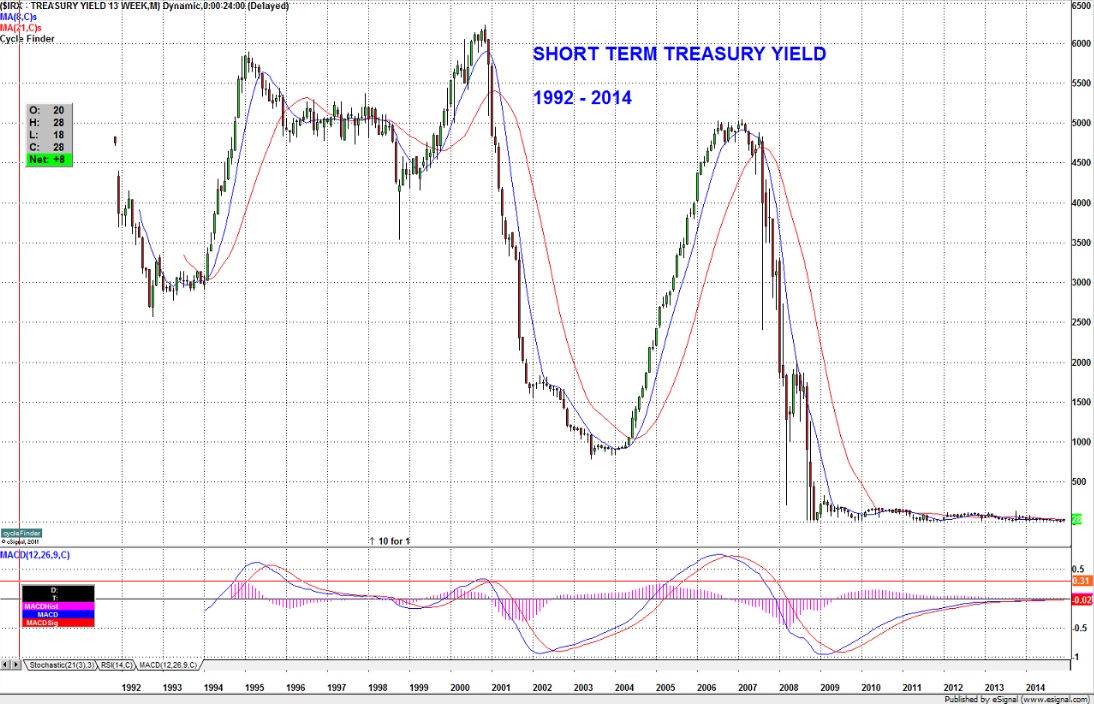 John Embry confirmed this in his latest KWN interview when he said that finance used to be an adjunct to the real economy but today finance is an industry in itself.  I agree with John’s accurate observation.  Finance today is an industry that feeds on itself and produces nothing because printed pieces of paper can never create wealth, except of course for the banks and bankers.  So sadly this bubble industry which has become so dominant for the world economy will lead the world to disaster in the next few years.”

Greyerz added:  “Right now gold is just gyrating around the $1,200 level.  I think we saw the bottom a few weeks ago but we may see a quick retest of the lows.  We know that the end of the year often creates major market turns.  So I wouldn’t be surprised if gold continues to trade erratically between now and the end of the year before it takes off to the upside in early 2015.”