June 14 (King World News) – Alasdair Macleod, based out of London:  Looking at our introductory chart, it seems bizarre that in a year when the US dollar M1 money supply is growing at 15% annualised (since 1 January), with interest rates still suppressed at the zero bound and with the price effects beginning to undermine the carefully choreographed CPI statistics, that gold is unchanged on the year. 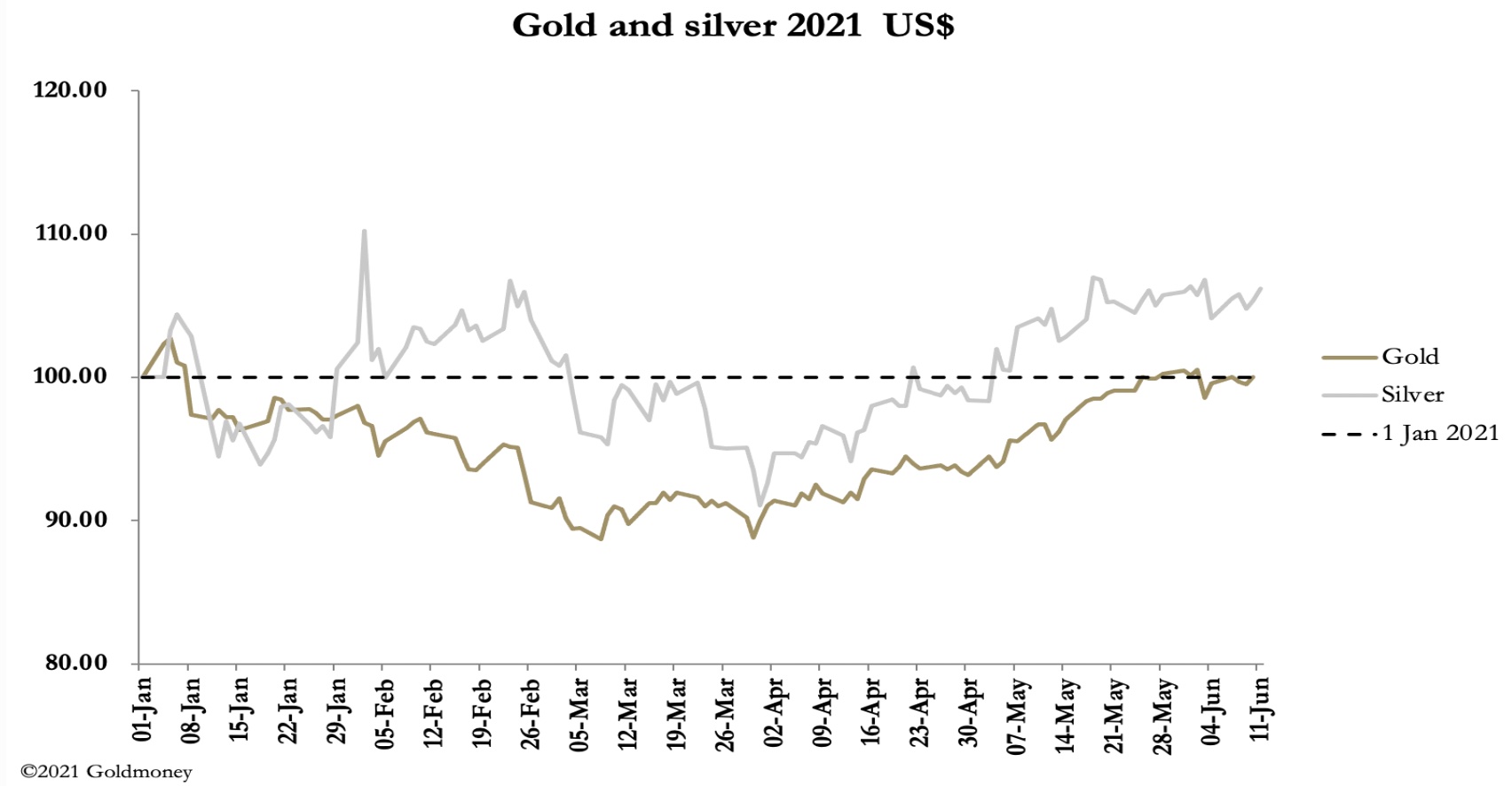 Last week provided evidence that this may be changing, with both gold and silver refusing to dip despite some determined bear raids. … $1900 and $28 respectively seem to be a Maginot line…

Belatedly, the gold and silver communities are waking up to new Basel 3 regulations introducing the net stable funding ratio calculation. The Basel committee finalised the regulation in October 2014, and it has taken seven years for it to be introduced. But from the end of this month, EU and US banks will begin to comply, and London is introducing it from next January. Unless the LBMA’s plea to the UK banking regulator is accepted for its members to be exempted, the new NSFR will make it uneconomic for LBMA banking members to continue to trade in paper gold. These banks also make up the bulk of the Swaps category on Comex, so they will be withdrawing from that market as well, meaning they will be considering how to close down their short positions, the total value of which is illustrated in our next chart. 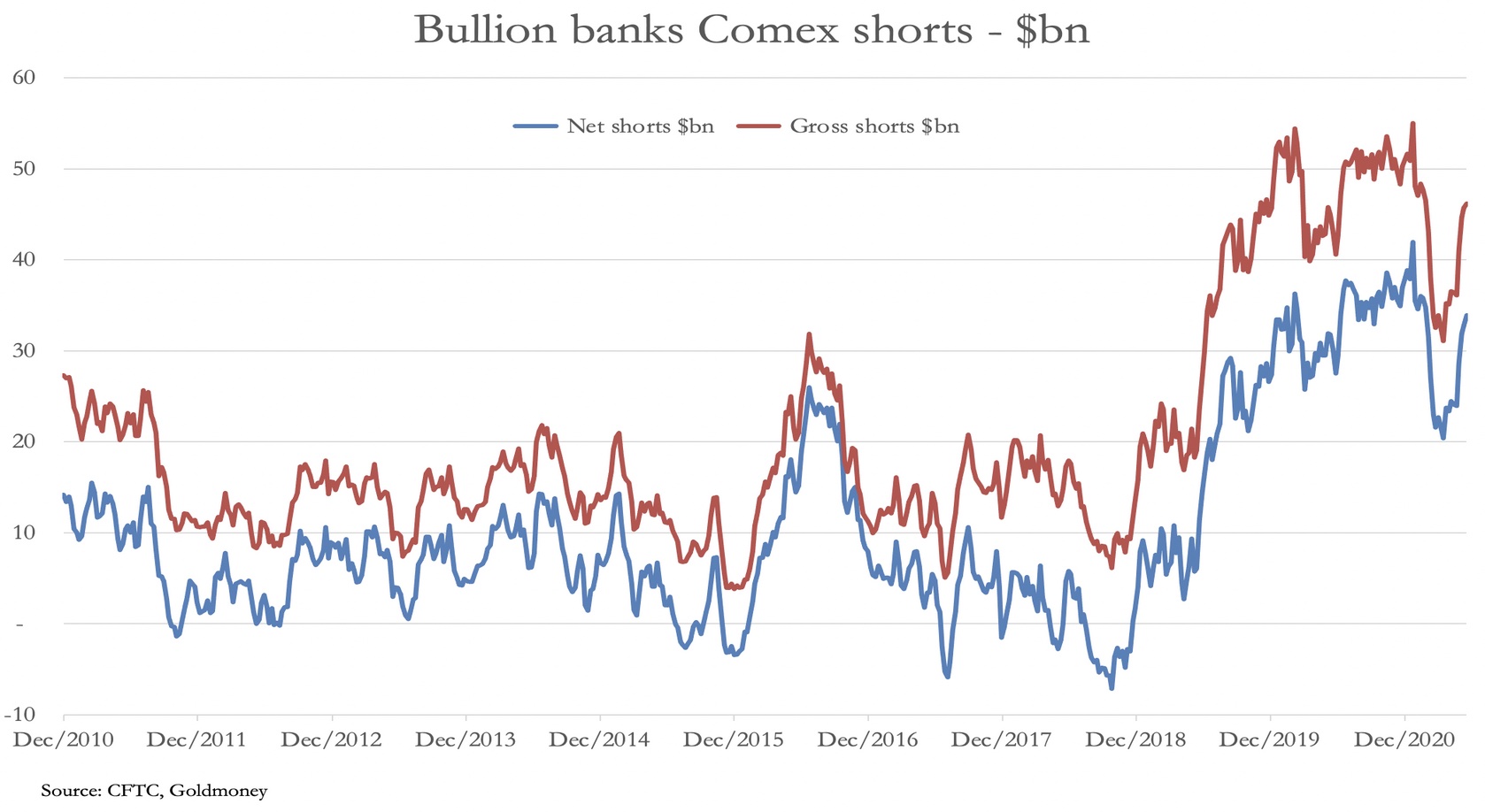 The gross short position is $46bn, and the net short position is $34bn, the former figure being spread between 28 Swaps for an average gross position of $1.64bn. The introduction of the new regulations will not force bank traders to close these positions immediately. But their treasury departments will be keen for them to reduce their position over time because funding them has become uneconomic.

It is not just gold and silver which are affected. All commodities, including energy contracts, are also caught. Essentially, it means the days of the expansion of paper supply by banks to absorb demand that would otherwise be satisfied in physical markets are coming to an end. This is bound to be reflected in commodity and derivative markets becoming less liquid and more volatile.

In other news, Cornwall is being inflicted with the G7 circus, where leaders of egalitarian nations parade their democratic credentials and their caring for others less fortunate. It is in this vein that President Macron told a news conference that he would like to see the sale of gold reserves to finance aid for Africa.

Now, where have we heard this before? Ah, yes! Having sold half of Britain’s gold reserves in 1999, Gordon Brown doubled down getting the IMF to sell 403.3 tonnes of gold ten years later. It appears there is now growing interested from the likes of Oxfam and The Guardian for the IMF to sell gold to help poorer nations. If the gold price continues to rise, we are likely to witness more pressure of this sort.

IMF Gold Sales: Exactly What We Saw In Historic 1970s Gold Bull Market
King World News note: IMF gold sales did not stop the price of gold from skyrocketing during the 1970s bull market and it will not stop gold from skyrocketing this time as well. It is simply jawboning and delaying tactics in what will ultimately be a historic mania in the gold market.