With the price of gold surging today, one of the greats in the business says gold is headed to a new all-time high as gold-backed ETF’s now exceed 100 million ounces.

Gold’s bullish outlook left unscathed by recent weakness
June 4 (King World News) – Ole Hansen, Head of Commodity Strategy at Saxo Bank: Gold’s return to $1700/oz, following another failed breakout attempt, has left some investors worried that gold’s future may not look that golden after all. Before digging into current developments let me clarify our view. We still see gold as a valuable diversifier amid a very uncertain economic and geopolitical outlook. With this in mind our forecast is still that gold will move higher and eventually within the next 12 to 24 months breach the record high from 2011 at $1920/oz.

Gold Is Headed To All-Time High 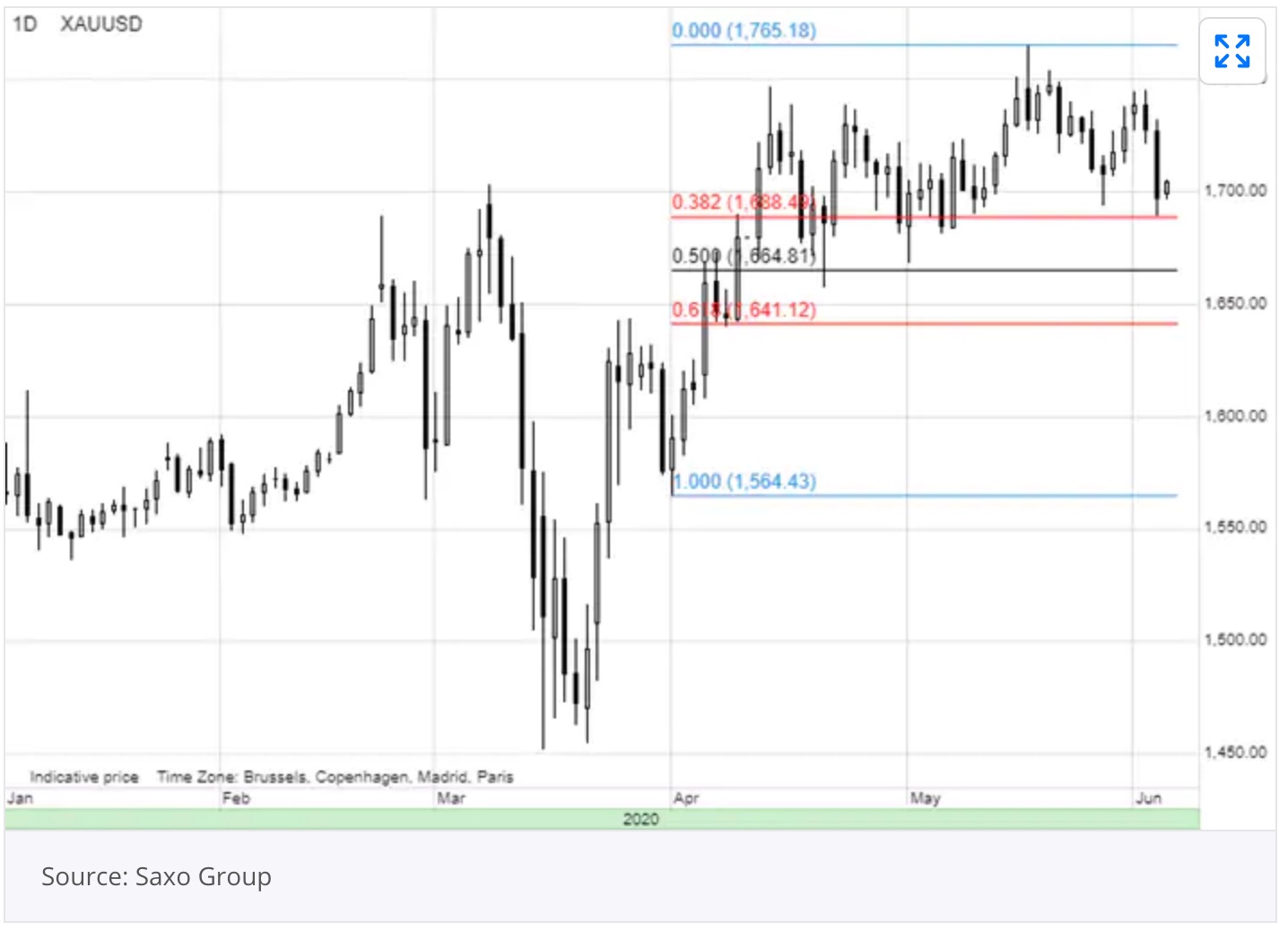 Recent price action has however once again put on display gold’s ability to frustrate while highlighting the need to be patience. It is also worth noting that the correction seen so far has amounted to less than 5%, not a move that should bring out any sweat unless positions are held with a high degree of leverage. The frustration in some quarters has been driven by gold’s recent inability to benefit from broad dollar weakness and tensions, both domestically in the US and not least outside with US-China tensions on the rise.

We Do Not Share V-Shaped Recovery Optimism
Instead the market has been focusing on the continued rally in global stocks and continued easing of lockdowns around the world. These developments have, despite improved but still dismal economic data, raised hopes that a V-shaped recovery may occur over the coming months. This is optimism we unfortunately do not share – with millions of workers unlikely to return to work, company earnings are likely to disappoint. Adding to this the unfortunate risk of the virus re-emerging as some economies attempt to open-up too soon.

On a product specific note the market has become somewhat uncomfortable about the continued decline in open interest and speculative longs held by funds in the CME gold futures contract traded in New York. Both have dropped to 12-month lows and while it may signal fading interest in gold, developments elsewhere are pointing to a product specific challenge and not the underlying itself.

GOLD’S GREAT DISCONNECT: Heavy Market Maker Losses
The transatlantic disconnect that occurred between gold futures traded in New York and spot gold traded in London back in March, left many market makers with heavy losses. The link between the two markets is called the ETP (Exchange for physical). Once the spread between spot and futures diverge too much from fair value market makers step in to take the other side of the trade. EFP trading however depends on the ability to freely move gold from London to New York in order to arbitrage these spreads.

The pandemic temporarily shut transport routes and refining activity and it let to the blow out in spreads. A development which ended up costing market makers hundreds of millions of dollars in unrealized and eventually realized losses. As a consequence several market makers have closed down while others have had their trading limits cut. The risk of repeat has led to many investors and traders instead focusing on bullion-backed ETFs.

Total holdings in bullion-backed ETF’s now exceeds 100 million ounces with continued growth seen during the past couple of years. The two biggest ETF’s hold 50% of these investment with 36.4 million in the SPDR Gold Shares (GLD) and 14.2 million in the Ishares Gold holdings (IAU). 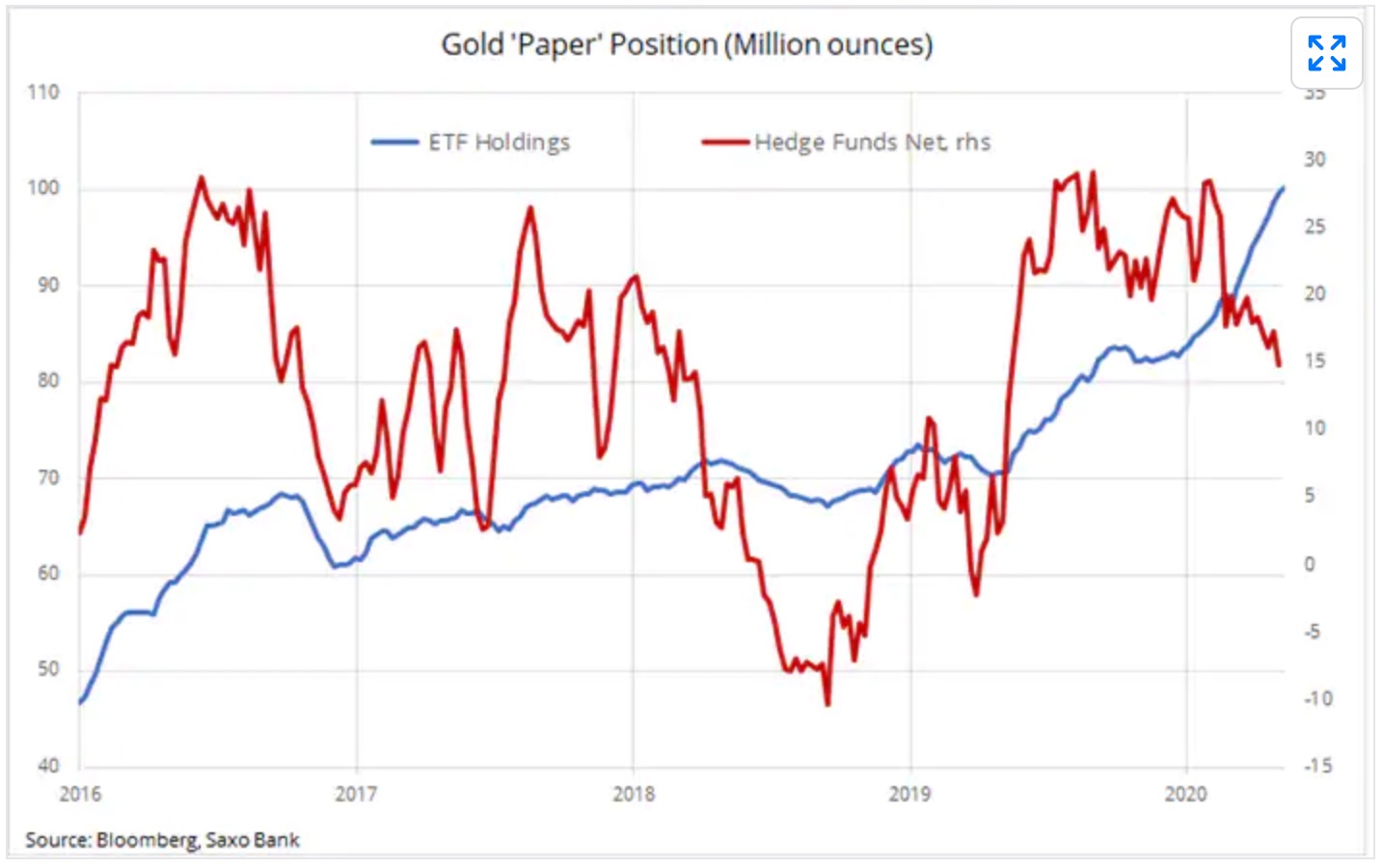 The above mentioned developments contrast with hedge funds who have cut their net-long in half since February. We suspect some of that reduced exposure has been transferred to ETF’s as per the above.

Silver
One tailwind that gold did experience up until this week was the continued recovery in silver. The 35% collapse in the silver price between February and March drove the gold – silver ratio (ticker: XAUXAG) to a record above 125 (ounces of silver to one ounce of gold). Well above its five-year average closer to 80. From that very weak level silver has now recovered and based on the technical picture it may struggle to outperform gold further, at least in the short term as per the XAUXAG ratio chart below. 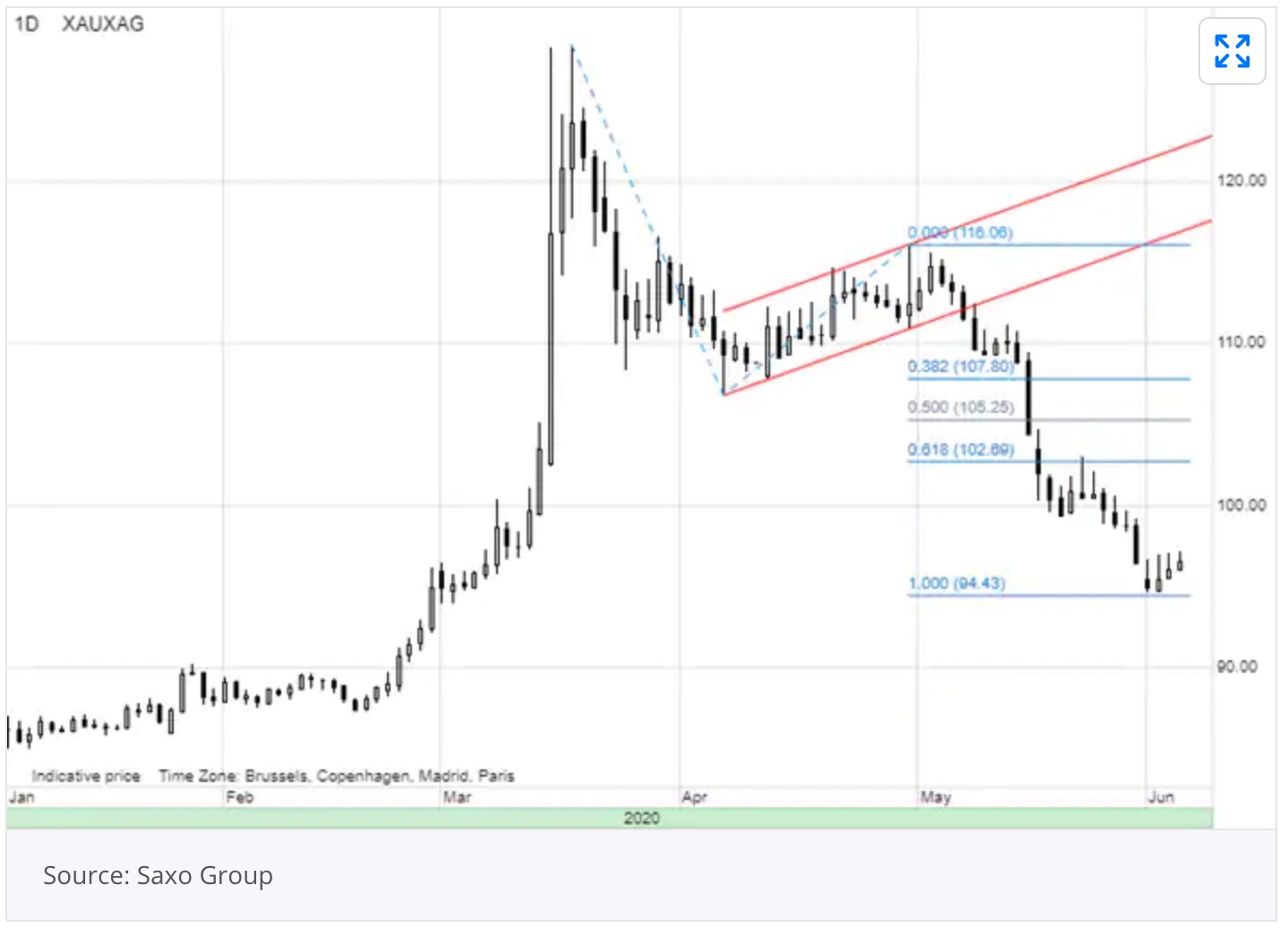 We maintain our bullish outlook for both metals, not least gold now that its premium to silver has narrowed. The main reasons why we cannot rule out reaching a fresh record high over the coming years are:

Summary:
Golds return to USD 1700, following another failed breakout attempt, has left some investors worried that golds future may not look that golden after all. We still see gold as a valuable diversifier amid a very uncertain economic and geopolitical outlook. The recent price action has however once again put on display golds ability to frustrate while highlighting the need to be patient.