A wild week of trading has left global markets in chaos and the bad news is it may get even worse next week.

Big Picture
August 26 (King World News) – Alasdair Macleod:  This week, gold and silver consolidated the previous week’s falls, with gold trading at $1747 in European trading this morning, unchanged from last Friday’s close. And silver was at $19.17, up 15 cents. Comex trade in gold was light, but in silver somewhat healthier. 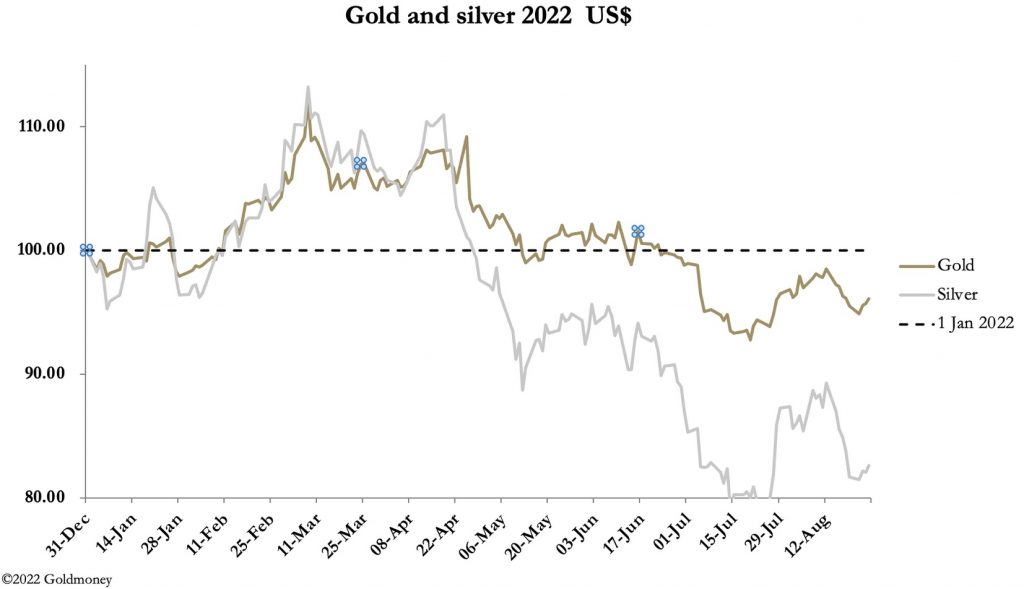 Prices for both metals appear to be in limbo. Certainly, the action in financial markets generally appear to reflect this ennui.

Few asset managers appear keen to address the inflation story properly. Besides a general ignorance of what makes consumer prices rise (spoiler alert: it is not President Putin and supply chain disruption, it is the production of credit to pay for it all), there appears to be a vain hope that the gathering recession will obviate the need for lasting rises in interest rates.

In the UK, for example, it was announced that the consumer price index for July rose by 10.1%, and Citi Bank forecast it would hit 18.6% in January. Meanwhile, markets are discounting the Bank of England’s base rate rising to only 4% next year. There is a serious disconnection from reality here, and it is not just in the UK.

Later today, Jay Powell is due to speak at the annual Jackson Hole conference. Even though markets expect his speech to be hawkish — we have no advanced knowledge of what he will say — he will almost certainly prevaricate on this issue, holding out the hope that rate rises need not rise substantially enough to address the inflation problem, because he will expect inflation will eventually return to the 2% target of its own accord.

Let’s put this in context. Our next chart is of the yield on the 10% US Treasury bond. 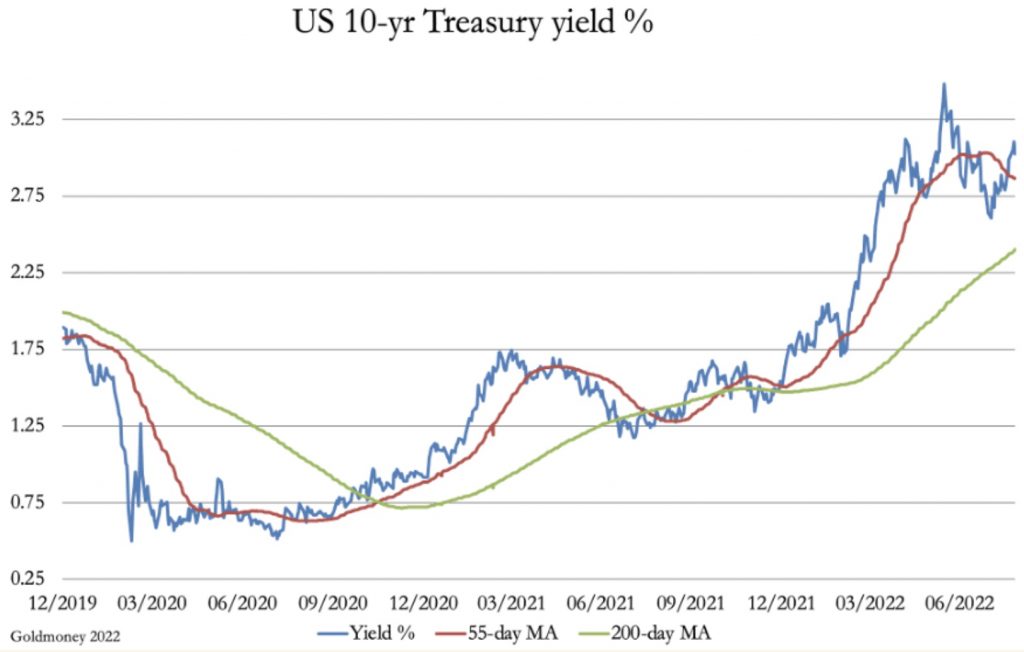 With an official CPI increase of 10.1%, the yield on this reference bond at only 3.08% this morning is far too low, unless that is, the rise in the CPI rate is temporary. But almost unnoticed, the yield has started rising again above both moving averages, signalling it could be on the verge of a significant rise.

If so, and the yield exceeds the 3.5% level seen in mid-June, we can expect equity markets to slide and the dollar’s trade-weighted index could rise even further. This is next. 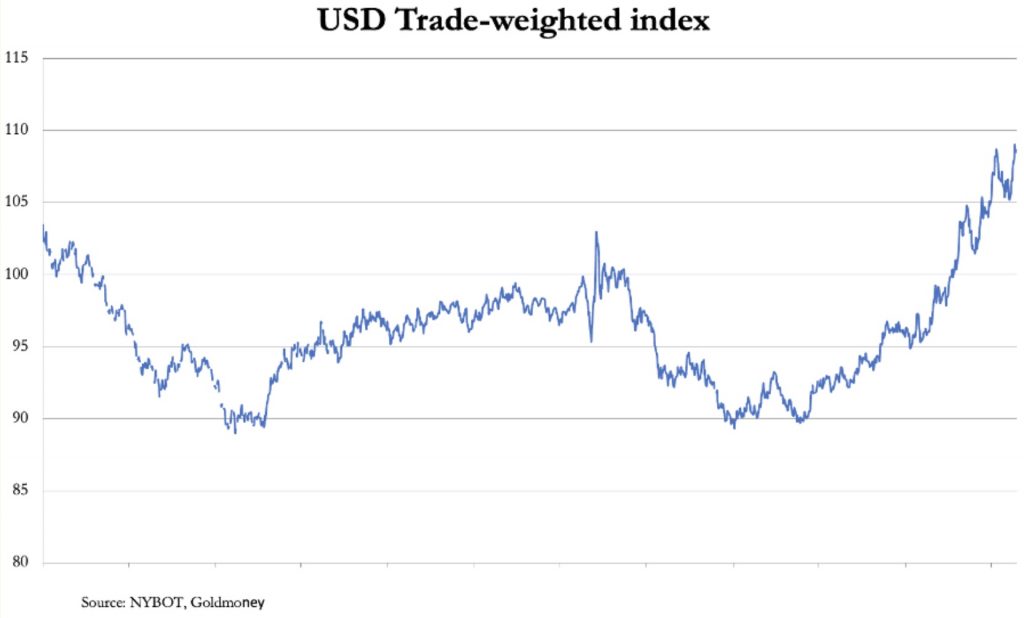 The TWI is not a reflection of the dollar’s strength, but of the weakness of the other fiat currencies. They are simply falling faster than the dollar. Look at our next chart, pricing in real money, which is gold: 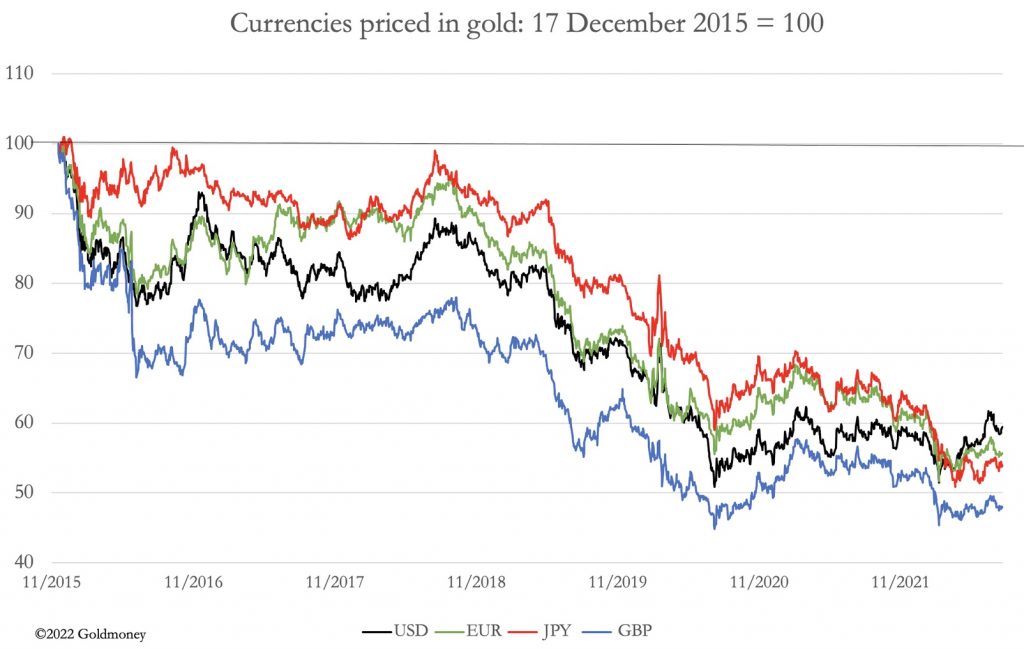 There is a strong consensus among fund managers that inflation will go away and that while there are more increases in interest rates to come, they will be limited. But our next chart, of the long-term bond yield on a log scale, clearly shows the downtrend has been broken and that the recent correction merely back-tested it where it found support. The arrows show how well established the forty-year downtrend was — until now. 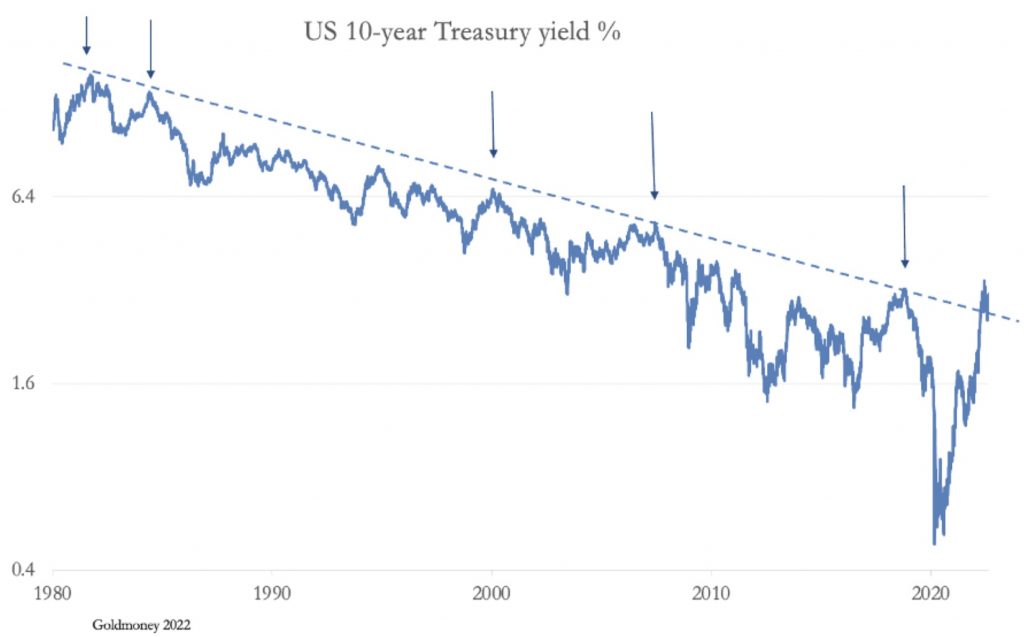 The only real problem for the gold price is overcoming the erroneous belief that higher interest rates are bad for it.

Within hours King World News will be releasing an extremely important audio interview with Michael Oliver discussing gold, silver, the US dollar and global markets.