When this collective delusion of a “Volcker 1979 Playbook” shatter it will be spectacular.

When The Delusion Shatters It Will Be Spectacular
April 5 (King World News) – Luke Gromen:  Fascinating to watch the Fed (and many market participants) engage in the collective delusion that they can run the “Volcker 1979 playbook” with US debt, deficits, and Balance of Payments akin to 1920 Europe. When this collective delusion shatters, it will be spectacular. 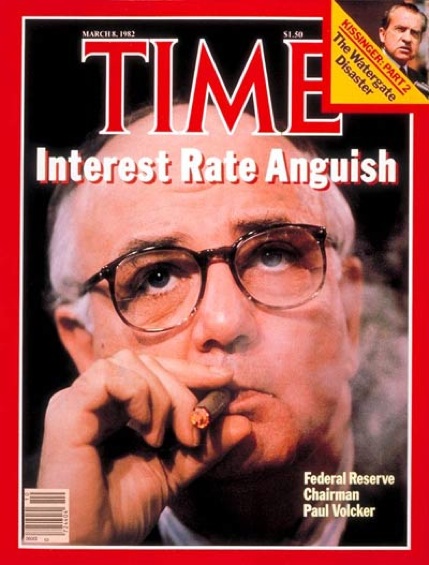 The Magnificent Rise Of Gold
Egon von Greyerz:  The debt-soaked, energy-dependent West is not as strong as the headlines would have you believe, which means Gold, as it has done for thousands of years, will rise as failed leaders, debt-soaked nations and world reserve currencies fall…

US Personal Savings Rate Has Collapsed To 6.3% 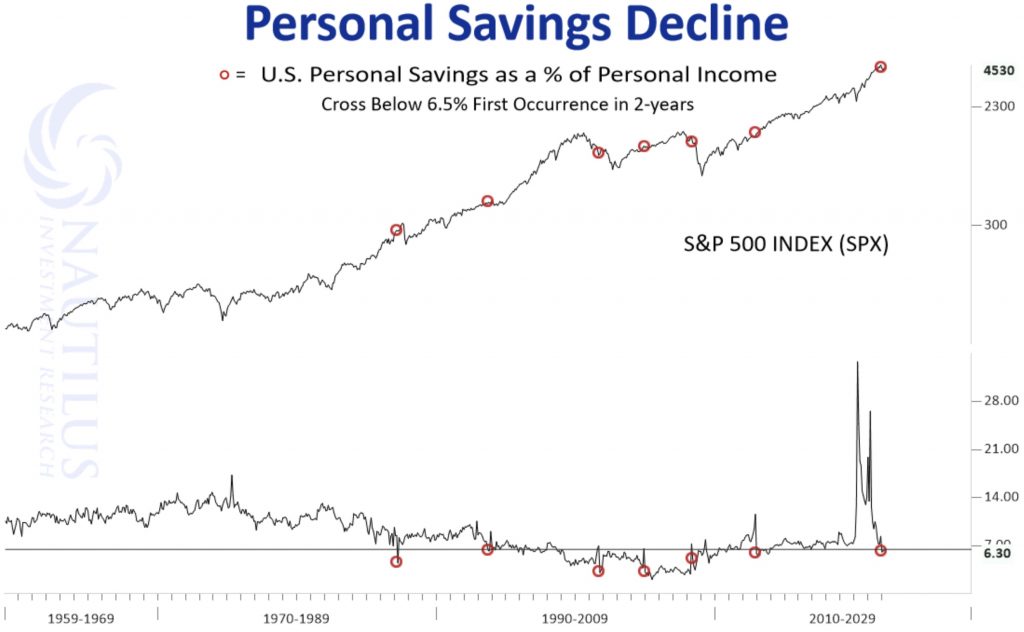 Important Copper Alert
William Middelkoop:  Copper Alert ‘The global copper industry needs to spend more than $100 billion to build mines able to close what could be an annual supply deficit of 4.7 million tonnes by 2030, Erik Heimlich, head of base metals supply at CRU said this week’

The Economy May Go From Bad To Worse
Peter Boockvar:  The March ISM services index rose to 58.3 from 56.5 but that was just under the estimate of 58.5 and it was 68.4 right before omicron hit. 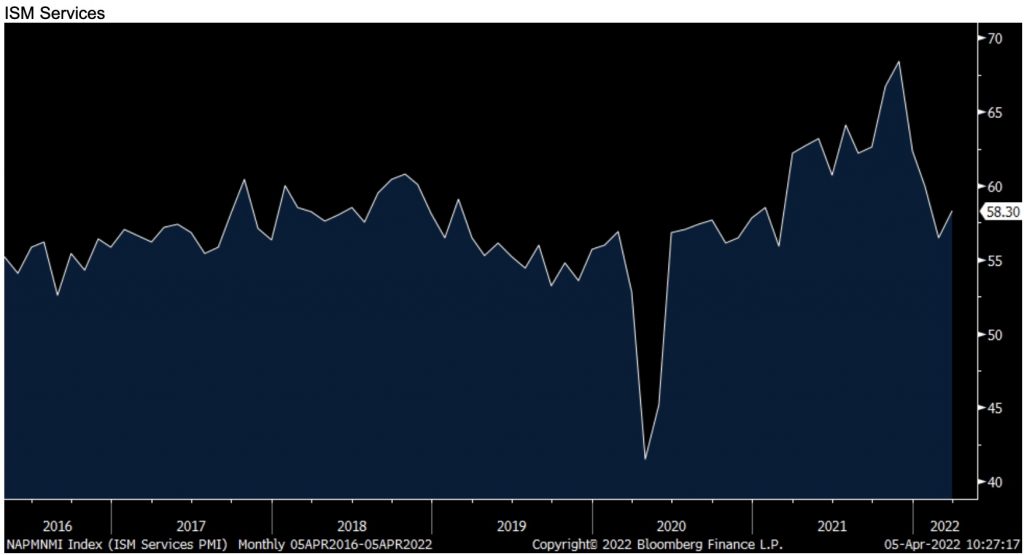 “The Inventory Sentiment Index returned to contraction in March, indicating that inventories are in ‘too low‘ territory and not meeting current business requirements.”

Employment got back what it lost in February and then some, up 5.5 pts m/o/m to 54. On the delivery and pricing side, Supplier Deliveries fell 2.8 pts to 63.4 and that is the lowest since March 2021 but still is well above the 52.4 it stood at in February 2020. Prices paid rose within .1 pts of its highest level on record dating back to 1997 when this survey began. 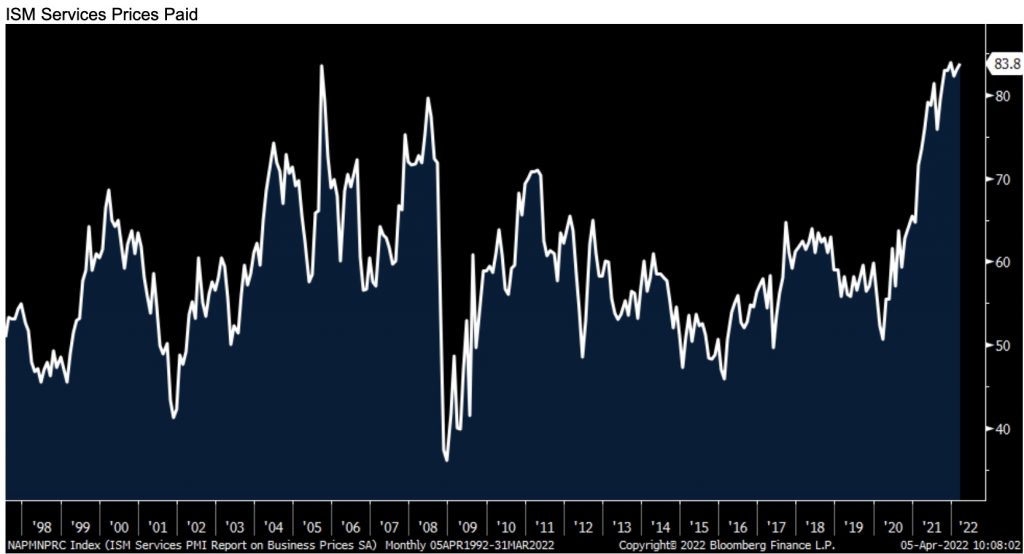 With respect to trade, exports jumped by 8 pts to 61 while imports fell by almost 7 pts but only some service companies report each.

The breadth of the increase got better as 17 of 18 industries reported growth vs 14 in February and 15 in January.

The ISM bottom line was unsurprising:

“There was an uptick in business activity in March but respondents have indicated that they continue to be impacted by capacity constraints, logistical challenges and inflation. Labor shortages have eased slightly, as Covid cases have declined and public health restrictions have been relaxed.

Geopolitical concerns – particularly the Russia/Ukraine war, which has impacted material costs, most notably fuel and chemical prices – have created uncertainty for many businesses.”

Global Supply Troubles Continue
Some company quotes were notable and while the ‘Supplier Delivery’ component to fall m/o/m, here what was said on that:

“Supply chain challenges continue at about the same levels as last month. Employment has improved as covid cases are declining. Restaurant sales have improved since Valentine’s Day, with mask and vaccine verification mandates being dropped.” — Accommodation & Food Services

RECESSION WARNING: Expect Capital Expenditures To Collapse
Finally, this was a noteworthy quote about possible capital spending plans. If companies see their profitability at risk, they will spend less in capital spending, a key economic pillar if global trade and consumer spending moderates because of higher inflation:

When a dove talks tough we take note. I’m talking about Vice Chair Lael Brainard today in a speech who reiterated the rate hikes that are coming of course but that has already been priced in. What takes her more to the hawkish side from here is the “rapid pace” of balance sheet runoff that she is calling for.

“The reduction in the balance sheet will contribute to monetary policy tightening over and above the expected increases in the policy rate reflected in market pricing and the committee’s Summary of Economic Projections.”

I’m guessing QT, which will most likely begin after the May meeting, will total $80b per month, or about $1 Trillion on an annualized rate. In 2018, the balance sheet shrunk at a pace of about $30b per month. So $80b is why it would be considered ‘rapid.’

As seen in the chart below, QT really picked up in early 2018. The size of the Fed’s balance sheet is in orange. The fed funds rate is in white. 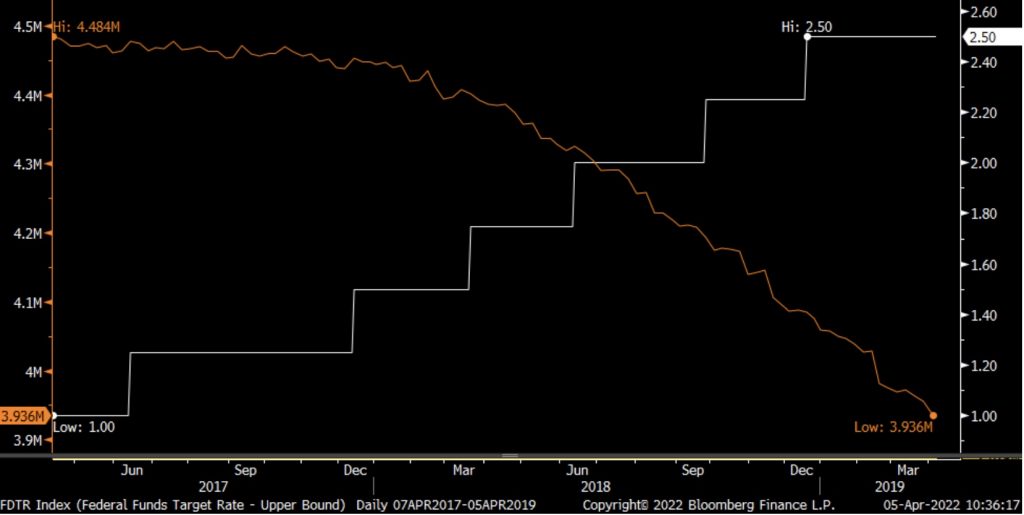