Here is a look at what to expect next from gold in this age of great inflation.

Gold’s Ability To Defy Gravity
February 10 (King World News) – Ole Hansen, Head of Commodity Strategy at Saxo Bank:  Gold’s ability to defy gravity amid rising US real yields continues and so far, any weakness below $1800 has quickly attracted fresh buying. The most recent and biggest challenge was in the aftermath of last month’s FOMC meeting where a surprisingly hawkish change in tone sent the yellow metal sharply lower before a steady recovery has taken the price back to unchanged for the year. Gold’s small dip last year after averaging 21.7% the previous two years was driven by long liquidation from asset managers amid strong equity markets and low volatility as well as the belief rising inflation would turn out to be transitory, and not pose a longer-term threat to growth and price stability. 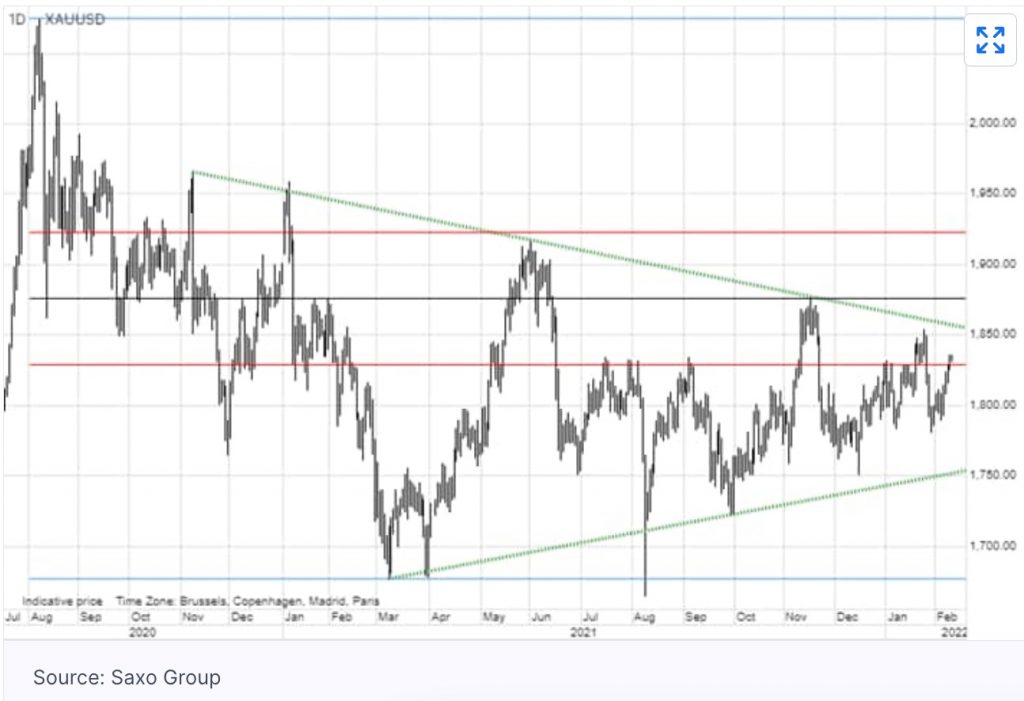 Towards the end of last year, a major change occurred at the US Federal Reserve after President Biden’s team likely made it clear the if Team Powell wanted to lead the Fed, it needed to focus on the +150 million Americans at work seeing their pay reduced every month in real terms by the Fed’s inaction on inflation, rather than focusing on maximizing accommodation to support the remaining few million unemployed in finding work. Both Powell and Brainard (the incoming Vice-Chair) complied and forcefully so and the hawkish shift in language helped send US ten-year real yields sharply higher while the market priced in a rapid succession of rate hikes, with more than five now priced in for 2022…

Since then gold, the most interest rate and dollar sensitive commodity has managed to withstand a 0.6% rise in US real yields. Apart from a small bid from current geopolitical concerns we see several other drivers emerging, some of which are highlighted below.

Gold has during the past few months been exhibiting rising immunity towards rising real yields with investors instead focusing on hedging their portfolios against the risk of slowing growth and with that falling stock market valuations as well as increased turbulence in the bond market. Even more aggressive rate hikes may end up being positive for gold as it will further raise the risk of a policy mistake from the Federal Reserve as it increases recessionary risks. 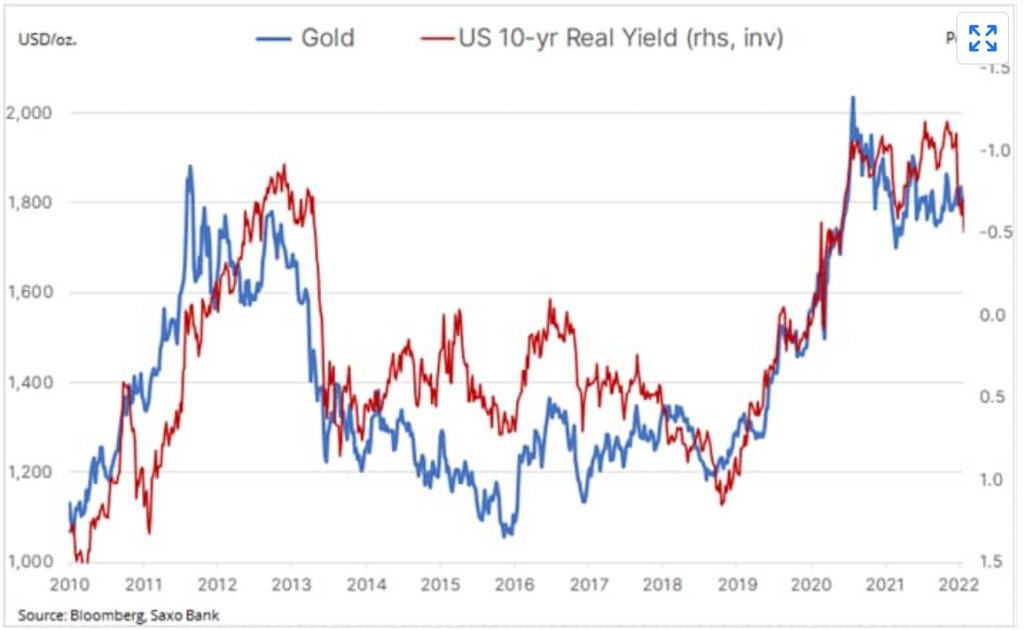 Gold’s credentials as an inflation hedge as well as a defensive asset have received renewed attention with rising stock and bond market volatility amid a market adjusting to a rising interest rate environment. At the same time, we believe inflation will remain elevated with rising input costs, wages and rentals being a few components that may not be lowered by rising interest rates. With this in mind gold is also increasingly being viewed as a hedge against the markets current optimistic view that central banks will be successful in bringing down inflation. 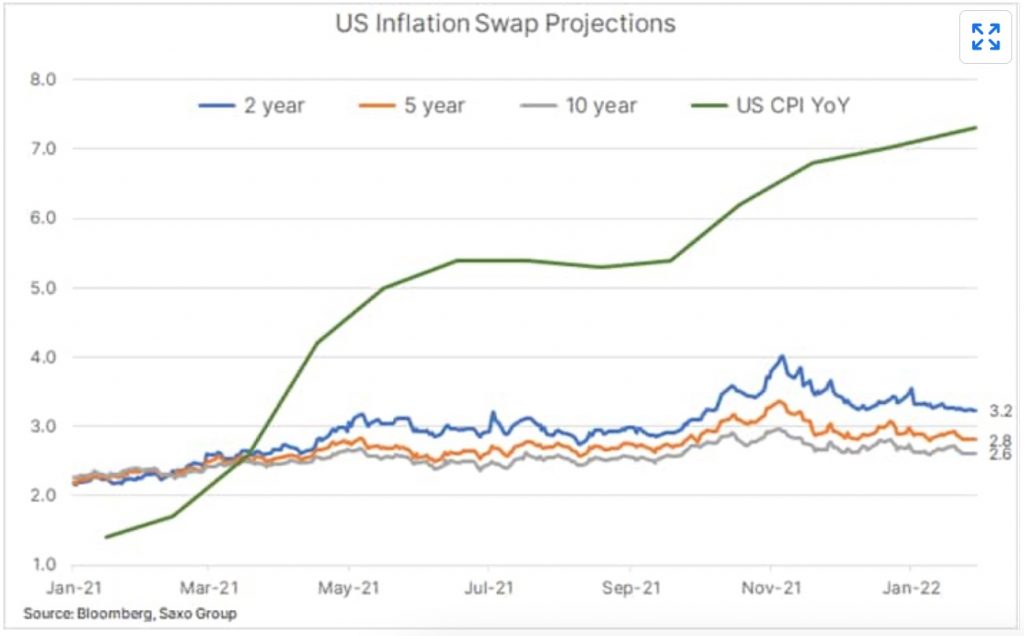 The commodity sector has shown renewed strength during the past year with strong fundamentals underpinning many individual commodities where several will be facing a prolonged period of a mismatch between rising demand and inelastic supply. With some of the worlds most tracked commodity indexes holding between 5 and 15% of their exposure in gold, any demand for a broad exposure to the commodity sector will automatically generate additional demand for gold.

While asset managers as seen in the ETF chart below are showing signs of renewed appetite, the price action has yet to trigger any increased interest from leveraged money managers who often focus more on momentum than fundamentals. In the week to February 1 they held a net long in COMEX gold futures of just 62,500 lots or 6.5 million ounces, some 78% below the record peak from 2019. Money managers focusing on momentum tend buy into strength and sell into weakness, and in order to attract increased demand from leveraged trading accounts, gold as a minimum needs to break above the 50% retracement of the 2020 to 2021 correction at $1876 which is also the 2021 high. In the other direction, failure to hold above $1750 may signal a deeper correction. 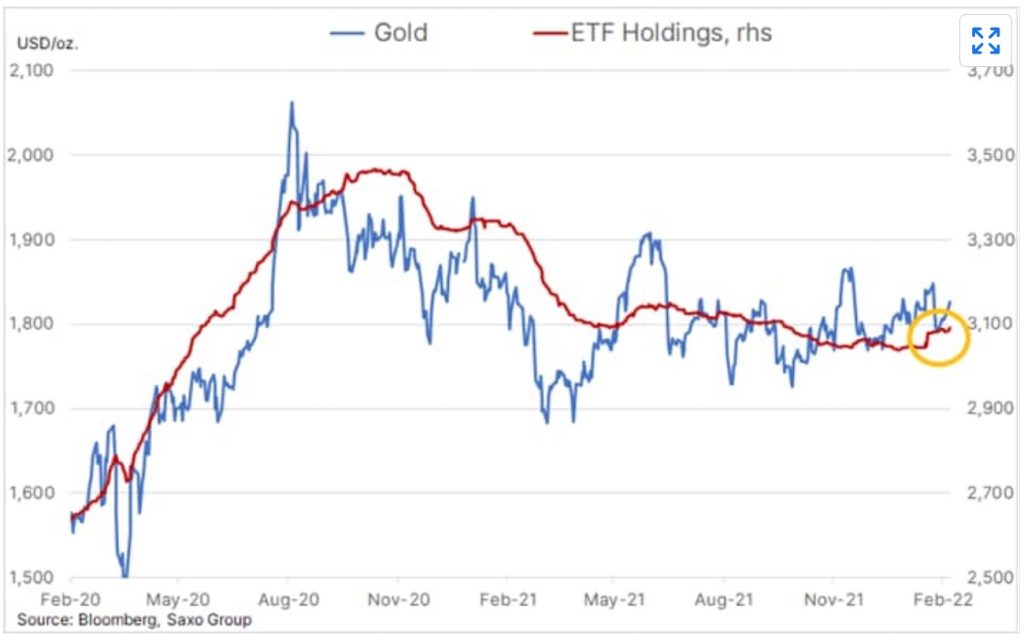 Summary:
Gold’s ability to defy gravity amid rising US real yields continues and so far, any weakness below $1800 has quickly attracted fresh buying. As the headline suggests we see part of the renewed demand for gold being driven by investors seeking a hedge against inflation and not least against the current optimistic view that central banks will be successful in bringing down inflation. Adding to this the recent turmoil in bonds and stocks as well as a general strong investment demand for commodities.

Man Connected In China At The Highest Levels Says Price Of Gold To Reverse Higher, Will Surge $450