Evergrande Crisis, China And The Metal Of Kings
September 20 (King World News) – James Turk:  The problems with Chinese real estate giant Evergrande are taking centre stage, Eric, and rightly so. A default on its $300 billion of debt could really knock the markets. But the important question is whether the turmoil already being created is the start of a financial crisis, or just a warning shot over the bow.

There were plenty of warning signs before the 2008 crisis. Two Bear Stearns real estate funds collapsed in May 2007, highlighting the fragility back then, which was followed by the collapse of Northern Rock Bank in England in August 2007.

As financial conditions worsened, Bear Stearns itself collapsed in March 2008. But it was still another six months before the height of the crisis was reached with the Lehman Brothers collapse in September 2008…

So the crisis now brewing may also play out over several months. Or it may begin on Thursday if Evergrande defaults on an $80 billion payment due that day.

Financial crises recur every few years because banks overextend themselves by making too many loans. That is very easy to do in today’s environment of zero interest rates. But the world has not had to face a serious crisis since 2008, so a financial crisis is overdue.

That’s too early to say because the details are not known yet. Nevertheless, the key here is counterparty risk, and that is where investors should be focusing attention. If a default happens, it could snowball quickly because of the way banks are so closely interlinked.

The surprise and the height of the crisis arrive when the crisis impacts assets believed to be safe. But the only really safe assets that avoid counterparty risk in a financial crisis are tangible. Land, buildings, and of course physical gold and silver will still exist regardless what happens to the banks and the fiat money they issue. But those other tangible assets do not have the liquidity of gold and silver, which brings up an important point.

To remain solvent, debtors in trouble sell what they can sell, which may not be what they want to sell. So it is possible that gold and silver have been under pressure recently because of forced liquidation from the ripple effect of Evergande’s problems. In any case, falling precious metal prices also suit anti-gold governments and central banks because it detracts attention away from the rising inflationary problems central bank money printing has created.

As a crisis builds, gold and silver bounce back, just like 2008. The bounce occurs when people focus on financial contagion and counterparty risk. Physical gold eventually made new all time highs after the Lehman collapse for two reasons. Higher prices resulted from the demand for safety to protect wealth by avoiding counterparty risk. Second, gold made new highs after the 2008 crisis because of all the money printing by central banks that debased all national currencies. Both of these reasons are likely to happen this time as well, eventually. For now, we need to let events unfold over the next few days as gold tests support. 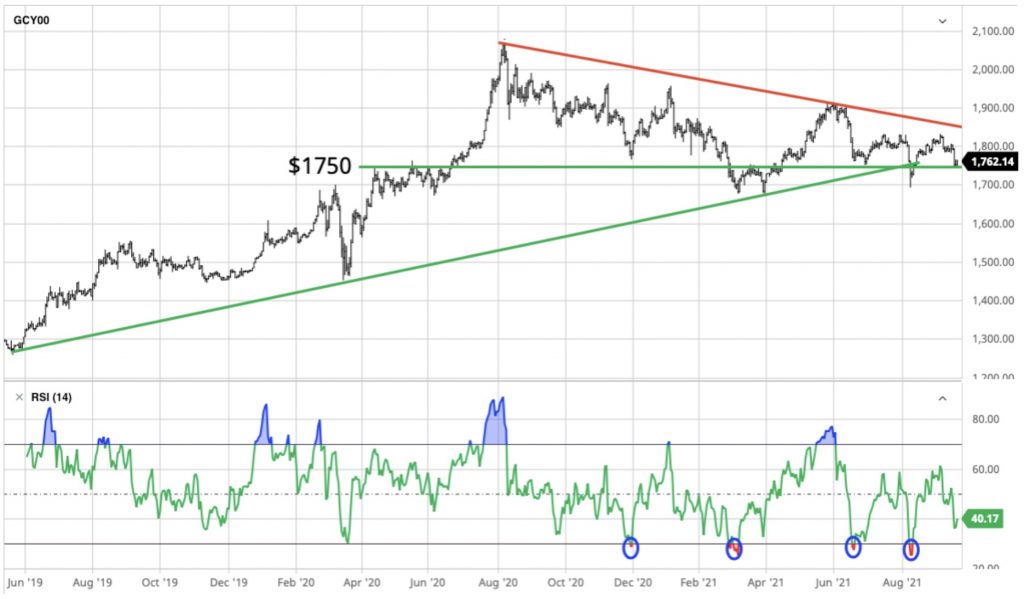 Gold is again testing support at $1750. There have been some head-fakes below that level, that touched oversold on its RSI, but each time support held for the two reasons I mention above. Since breaking above $1750 in June 2020, there has been, at the $1750 area, heavy buying of physical metal seeking safety from counterparty risk and preservation of purchasing power from central bank money printing.