With the Dow trading down over 252 points, crude oil tumbling another $2, and gold surging, today King World News is pleased to share a fascinating piece which looks at the ongoing carnage in the crude oil market, the strength in gold, and Louise Yamada weighs in as well.

After today’s plunge in crude oil and surge in the gold market, gold is now very close to a 70-year breakout vs crude oil (see remarkable chart below). 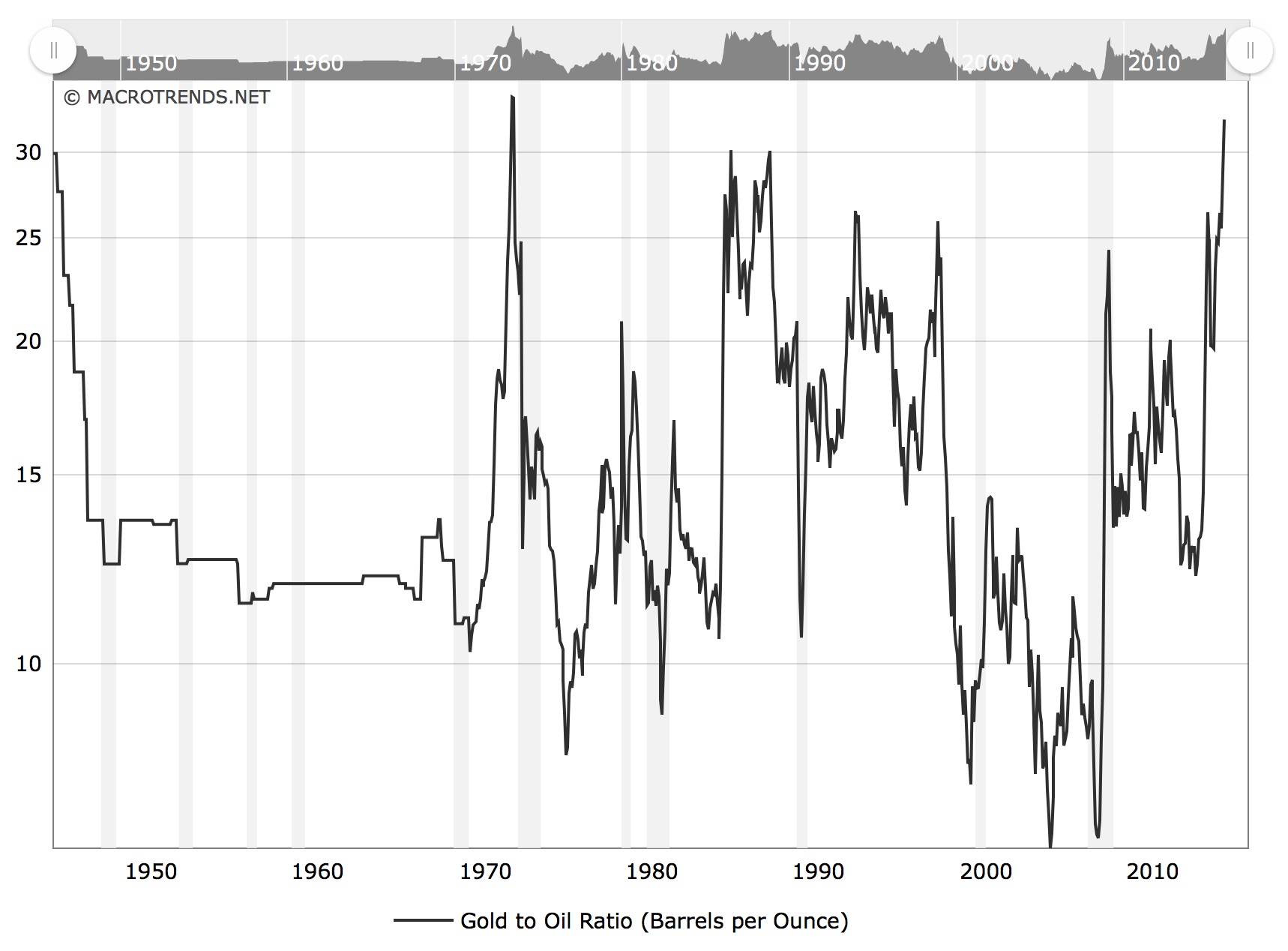 Despite the extraordinary performance of gold vs crude oil shown on the chart above, technical analyst Louise Yamada is staying with the trend when it comes to the gold market (see below).

Gold Spot price (GOLDS-1,062) has been struggling below the broken 2005 uptrend and below the declining 50- and 200-day MAs since late 2014 (see Figure 9, left). The 2005 uptrend has been definitively broken by 10% and risk remains for further attrition toward our long-standing targets of 1,000, possibly 800, representing the upper and lower support levels of the 2008-2009 consolidation (see Figure 9, circle, right chart), where price might be expected to consolidate again, or rest. 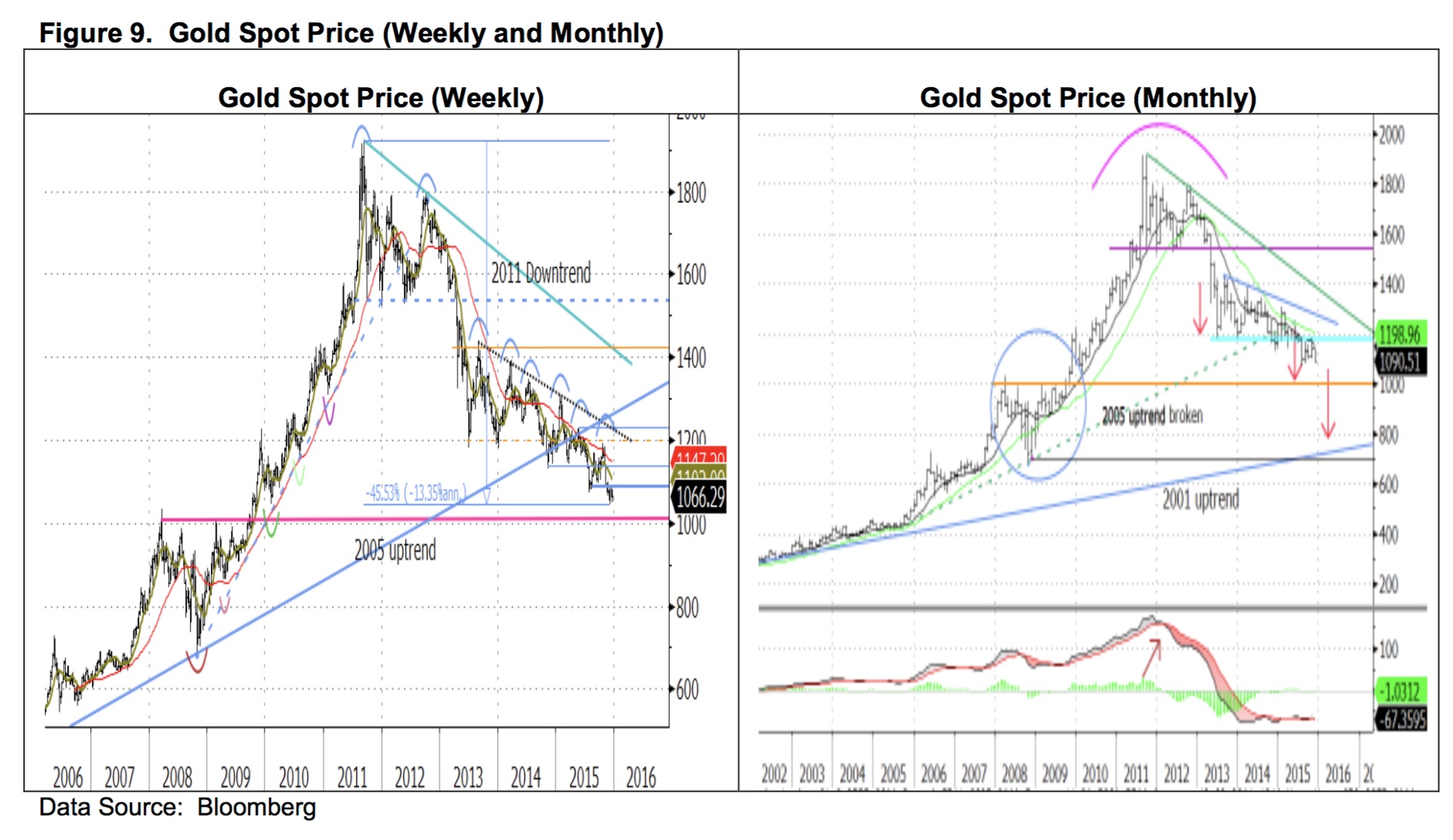 Rallies should continue to find resistance, first at 1,100, then at 1,240 -1,260 under the broken uptrend, none of which have been penetrated on the 2014-2015 minor rallies. The observation that each rally from the 2011 peak has failed at a lower high (evidence of selling into strength), creating the downtrends, confirms the inherent weakness in price.

A return to 800, near the 2002 uptrend, might find support near the 2008 low, and might also be a final long term basing level for Gold. We would not anticipate Gold returning to the 2000-2002 price levels. Price could establish a higher floor with flattening price action over years (defining Gold’s bear market in a range yet to be established, perhaps near the 2002 uptrend and 800 noted above).

Technically, the structural bull market for Gold has run its course with the 2011 peak, notwithstanding interim, even generous, rallies, particularly as / if an equity cyclical bear interruption lies ahead in 2016. At some point the downward momentum should wane and gold will find a resting place for an extended consolidation over a period of years (decades?), notwithstanding interim rallies and retreats.

King World News note:  It is important to note that 46 percent of global gold production is now being done at a negative cash flow, so the mining companies have already been pushed to the brink.  It is forecast that gold production will now decline due to the inability of companies to economically mine gold at the current price.  This also makes any further declines in the price of gold extremely disruptive when it comes to supply. We believe that gold is in a secular bull market and we are now seeing the end of the cyclical bearish phase.  This would mean a resumption of the next leg higher in gold’s secular bull market rather than further price weakness.

***To hear legendary Art Cashin’s take on the gold market and his stunning 2016 predictions CLICK HERE OR ON THE IMAGE BELOW.

***ALSO JUST RELEASED:  The Last Time This Happened There Was A Wave Of Financial Turmoil CLICK HERE.