With the Fed hiking interest rates and signaling more rate hike are still to come, what in the world is going on here as a key indicator for banks just cratered?

What Is Going On Here?
Peter Boockvar:  What is going on here with the decline in commercial and industrial loans? See (stunning) chart for the week ended March 8th. 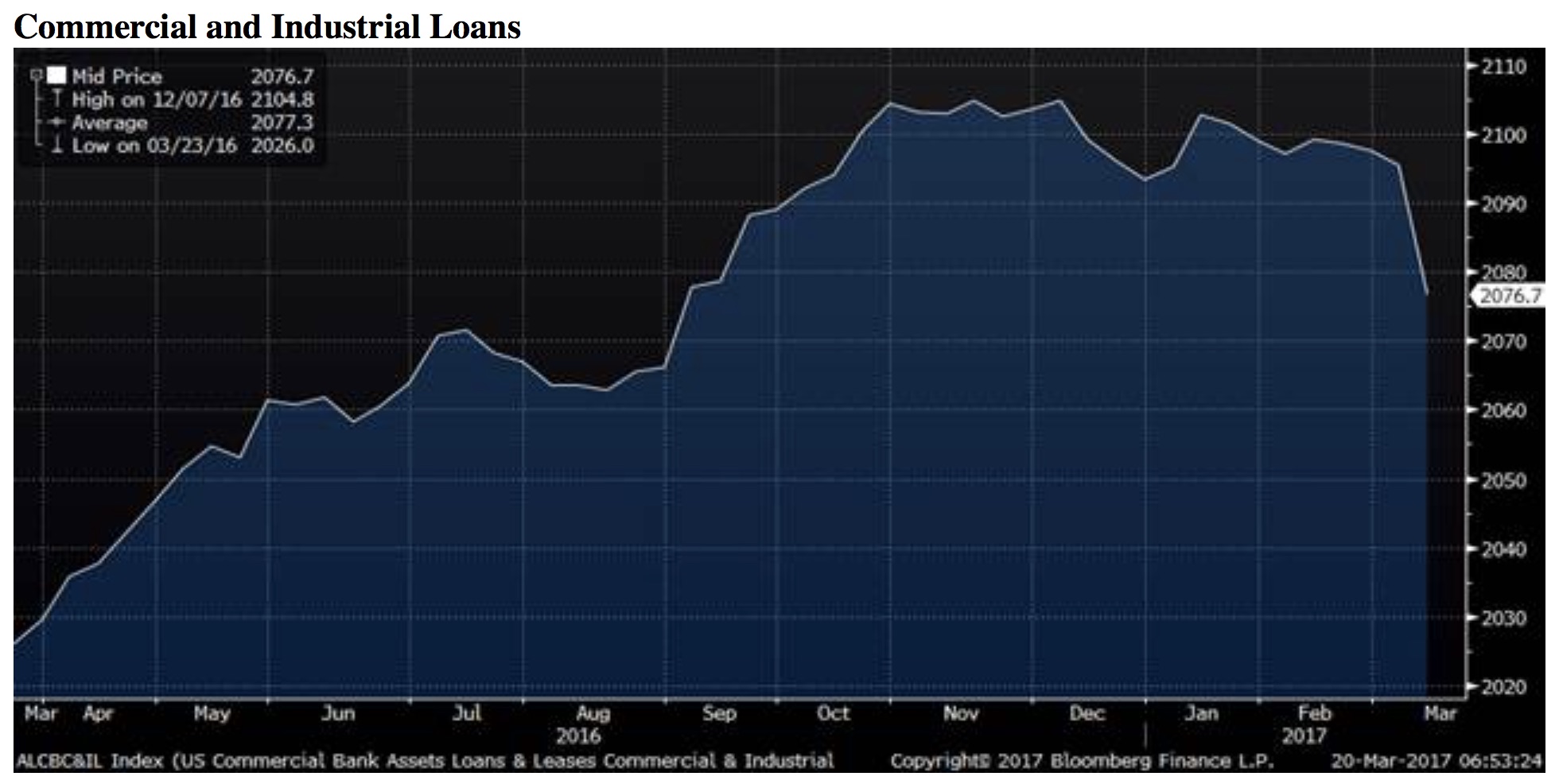 The Business Dictionary defines a C&I loan as “a loan made to a business or corporation, but never to an individual. C&I loans can be created in order to provide either working capital or to finance major capital expenditures. A C&I loan is usually short term in nature and is almost always backed by some sort of collateral.” I can only speculate and we’ll have to wait until upcoming bank earnings where companies can give a full explanation of this phenomenon…

Maybe it follows the large amount of debt issuance via the capital markets seen in the first two months of 2017 where companies are terming out their debt and paying down LIBOR based bank loans where the cost of money is going higher. At least on the investment grade side, companies have issued $254b of paper in the first two months of this year, up 8.5% y/o/y and this compares with the total of $1.28 Trillion last year (thank you Danielle Dimartino Booth, President of Money Strong for that stat). Can it be something more nefarious? Considering the bout of optimism post election both on the banking side and from non financial businesses, I can’t imagine but this is something worth watching.

After a .7% m/o/m rise in January, German PPI rose another .2% m/o/m in February but that was two tenths less than expected. However, the y/o/y gain was 3.1% vs 2.4% in January and the quickest rate of gain since December 2011. This was running negative less than a year ago. No, it was not just energy goosing PPI vs last yr (actually fell m/o/m) as PPI ex energy was higher by 2.2% y/o/y which is the highest rate of gain since November 2011.

Meanwhile, In Germany…
There was not any change to the ECB’s favorite inflation gauge in response to the German inflation number and I want to say this about inflation and the debate going on. Yes, the base effect of energy will start to wear off in a few months and headline inflation should begin to top out at historically low levels but industrial commodity prices are still up sharply y/o/y and services inflation remains persistent. While the level of current inflation is still historically modest, the recent move higher I believe should highlight and remind all how ridiculously low global interest rates still are for obvious reasons. Interest rates bottomed last July and the bond bull market is over and the predominant reason for that is because we’ve reached peak global central easing that is now reversing, however slow.

And In France & Italy…
Stay watching the French 10 yr oat yield as its 1 bp from breaking out to the highest level since September 2015. It’s higher by 3 bps to 1.14%. It’s spread to the German 10 yr yield is at a 3 week high. Is is Le Pen worries? I’m sure but I still don’t think she comes anywhere close to winning. But because Fillon is likely out and Macron at 39 yrs old still needs to prove himself, markets are doing what they do remembering the polls in the UK and the US. I did see one French poll today that has Macron up 60-40 vs Le Pen, up from 59-41 in the one prior.

It’s not just France though, the Italian 10 yr yield is trading at the highest level since July 2015 on a closing basis. Maybe this action in European sovereign bonds is not about politics and its simply positioning ahead of a 25% cut in monthly ECB bond purchases as of April 1st.

Draghi’s Obsession
As Mario Draghi is obsessed with 2% inflation (along with the BoJ, Fed and BoE), labor costs for the eurozone rose 1.6% in Q4 y/o/y, remaining in a pretty tight range of 1.2-1.9% over the past 2 years. German wages in particular were higher by 3% and points to the cost pressures being experienced there but not much elsewhere in the region. Without quicker wage growth, higher consumer inflation will only slow economic growth. Just ask the Brits on that one.

Time To Go Long The British Pound
As for the UK, we now can mark the calendar on March 29th that Article 50 will officially be tapped. Let the games now formally begin. As it’s not a surprise, the pound remains up a touch vs the US dollar and off its lows by 3 ticks from last week. I continue to like the pound here in the low $1.20’s as Mark Carney is pressured to back off from QE and its .25% benchmark rate at the same time that the pound weakness has absorbed and discounted a lot of Brexit worries.”