With many countries already having negative interest rates in place and more considering moving in that direction, people around the world are becoming increasingly concerned about the possibility of gold ownership being banned, particularly in the West.  This would represent a decisive move by the elite to cutoff one of the last vestiges of safety for investors against the monetary madness unfolding across the planet.

“When you recall that one of the first moves by Lenin, Mussolini, and Hitler was to outlaw individual ownership in gold, you begin to sense that there may be some connection between money, redeemable in gold, and the rare prize known as human liberty.” — Howard Buffett

Gold is a safe haven currency, i.e., it defends one’s personal wealth when legal tender is no longer capable of rendering this service. Governments that destabilize their own currencies have always been aware of gold’s particular significance in this context. In order to prevent capital flight into gold and the associated further destabilization of their currency, they have banned gold ownership time and again in the course of history. In the framework of the audacious monetary experiments taking place nowadays, potential gold bans due to its safe haven status should be on one’s radar screen as well.

Gold buyers need to know what could potentially be in store for them, should governments which regard safe haven currencies as a thorn in their side once again decide to restrict access to them. For this reason we are taking a look at historical precedents of gold bans.

Roosevelt’s ban of gold ownership
In the course of the Great Depression, president Franklin Delano Roosevelt inter alia signed the Emergency Banking Act of March 9, 1933. As an amendment of the Trading with the Enemy Act of 1917, which prohibited trade between US citizens and declared enemies of the state, the Emergency Banking Act empowered the government to confiscate all gold coins, gold bars and gold certificates held by the population, under the precondition that this was necessary for the protection of the US currency system. 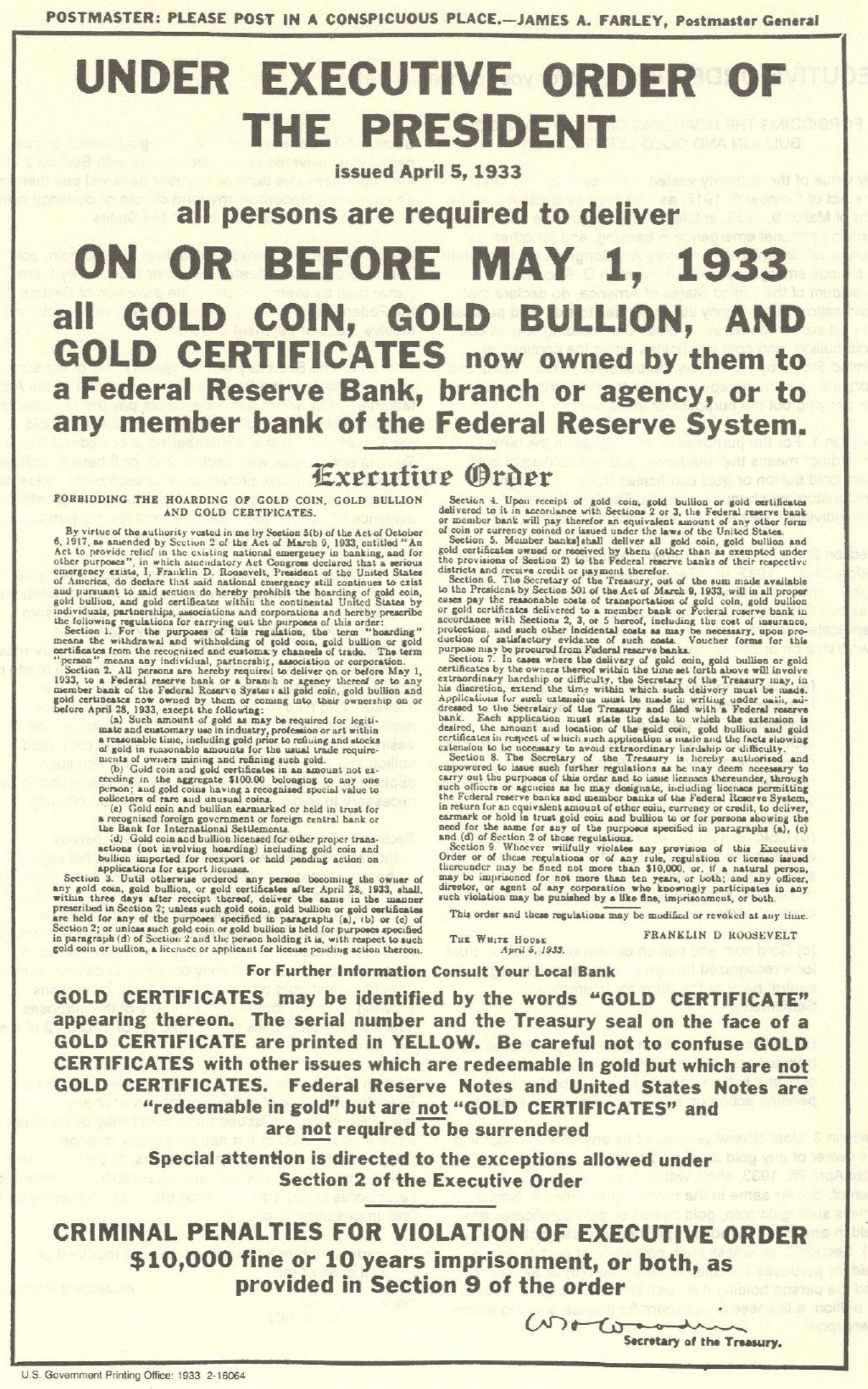 This precondition of course provided plenty of leeway in terms of its interpretation, and consequently citizens were asked just one month later already to hand their gold over to the US government. Compensation was set at the then prevailing fixed gold exchange rate of 20.67 USD per ounce.

Due to the government’s inflationary monetary policy, depreciation pressure on the dollar increased quite quickly, thus the gold price was raised via presidential decree to USD 35/oz. in 1934. At the time of the compulsory conversion many Americans accepted the new regulation without demur, as they believed that it would help to improve the economic situation and their money would therefore not be debased.

The penalties for illegal gold ownership were horrendous. There was either a fine of up to USD 10,000 (equivalent to approximately USD 190,000 today) or a jail term of up to ten years. In spite of this, the population is estimated to have delivered only around 30% of its gold holdings and the black market in gold flourished.

As it was almost impossible to control all households to find out whether they were in possession of gold, holding it was relatively safe. Many US citizens moreover stored gold overseas, such as in Switzerland, or bought numismatic coins, which were exempted from the ban. President Eisenhower subsequently expanded the ban on gold ownership to include gold held abroad and President John F. Kennedy tightened the noose even further. He prohibited the ownership and purchase of numismatic coins that were minted before 1933 as well. In addition, all gold coins stored by US citizens abroad had to be repatriated. The rather flimsy pretext for this was that the government had to protect US citizens against counterfeits.

Other gold prohibitions in the 20th century took a roughly similar course, such as e.g. in the Weimar Republic in 1923, in France in 1936, in India in 1963 or in Great Britain in 1966. Not all gold bans were the result of misguided monetary policy. While the ban in the Weimar Republic was tied to the great inflation, in France the reason was capital flight in the wake of the election victory of socialist politician Leon Blum. In India the trigger for the gold ban was capital flight as well, in the wake of the Sino-Indian border war of 1962; in Great Britain it was connected to rising industrial gold demand and the associated increase in the scarcity of gold.

What happened prior to the 20th century? In antiquity and in the Middle Ages private gold ownership was often prohibited as well, such as e.g. between 1292 BC and 1186 BC in ancient Egypt. This privilege was reserved to pharaohs and priests, as they performed their religious duties as representatives of the gods. In Sparta gold ownership was prohibited because the population was not supposed to take part in business life at all. In 404 BC gold ownership even became punishable by death and raids on homes were a daily occurrence.

The ancient Romans under Julius Caesar were slightly more modern by comparison: An upper limit for gold ownership decreed in 49 BC can be seen as a reaction to “misguided interest rate policy”. After Caesar suspended all interest payments, Romans started hoarding their money, which was of course not the decree’s intention. The gold ban in the Chinese Empire was also closely tied to monetary policy errors. The Middle Kingdom created fiat money in 1273 already and in this context immediately prohibited gold ownership. Barely 15 years later, a currency reform was enacted in the wake of massive inflation. The intention of the ban was to keep Chinese citizens from saving their wealth with the help of gold.

However, in the context of these historic gold bans one should keep in mind that gold still had an official monetary role in most of these cases. The Bretton Woods system remained in force until 1973, and only thereafter the global monetary system’s ties to gold were cut completely. As gold no longer plays this important role, a gold ban is nowadays less important from the perspective of governments and therefore also less likely. However, what is becoming ever more likely in view of governments’ rising need for revenue is more taxation of gold trading. Governments certainly have the option to lower the attractiveness of investing in gold in this way.

Conclusion
Since gold has currently no official monetary role, a prohibition of gold ownership appears unlikely at this point in time. Repressive measures with respect to gold ownership and trading will only become more likely once the gold boom gains significant momentum and its impact broadens to the point of becoming a veritable gold rush. Such a development would naturally go hand in hand with a loss of confidence in paper currencies. In view of the fact that the gold market currently still resembles a discreet private event, such concerns appear premature.

If voices start to assert that “similar to cash, gold is nowadays used in financing criminal activity” or that gold “is damaging the economy”, alarm bells should ring. However, even in the event of a gold ban, it shouldn’t be expected that governments would be able to confiscate all gold, as this would require conducting comprehensive and therefore uneconomic controls. If one wants to be on the safe side, one can purchase gold in forms that have traditionally often been exempted from bans, such as numismatic coins or smaller denominations.  King World News note:  KWN does not endorse the purchase of numismatic coins or encourage any of our readers to purchase numismatic coins.  The numismatic coin industry is one of the most corrupt on earth.

***To hear more about the gold and silver markets, listen to the jaw-dropping audio interview with Michael Belkin, the man who advises the most prominent sovereign wealth funds, pension funds, hedge funds, and institutional funds in the world discussing the historic run in the gold & silver markets, what to expect next for gold, silver and the shares and much more by CLICKING HERE OR ON THE IMAGE BELOW.