We are seeing major market moves as we start 2018, but look at this…Plus a short note from a legend in the business.

We’re Seeing Major Market Moves As We Start 2018
January 10 (King World News) – The following is from Andrew Adams at Raymond James:  It feels like we highlight a new breakout above some possible resistance level each and every week and that does not appear to be stopping. Just in the last week, the index has definitively traded above what had previously represented the upper end of the channel in place since the early 2016 bottom (the line connecting the April 2016 and March 2017 highs). As we have repeatedly written, action like this doesn’t generally occur unless the market is very strong.

Is the Market Too Strong, Though?
Yet, the strong weekly RSI reading has actually reached its highest level since at least 1980 (that’s as far back as my data goes). Since the RSI indicator is also used to gauge overbought/oversold levels, this means the market is basically more overbought than it ever gets…

That’s not necessarily a reason to panic, though, considering the last time it was even close to being this overbought was back in late 1995/early 1996, right in the middle of one of the greatest runs in market history.

Market Now At One Of Most Overbought Levels In History 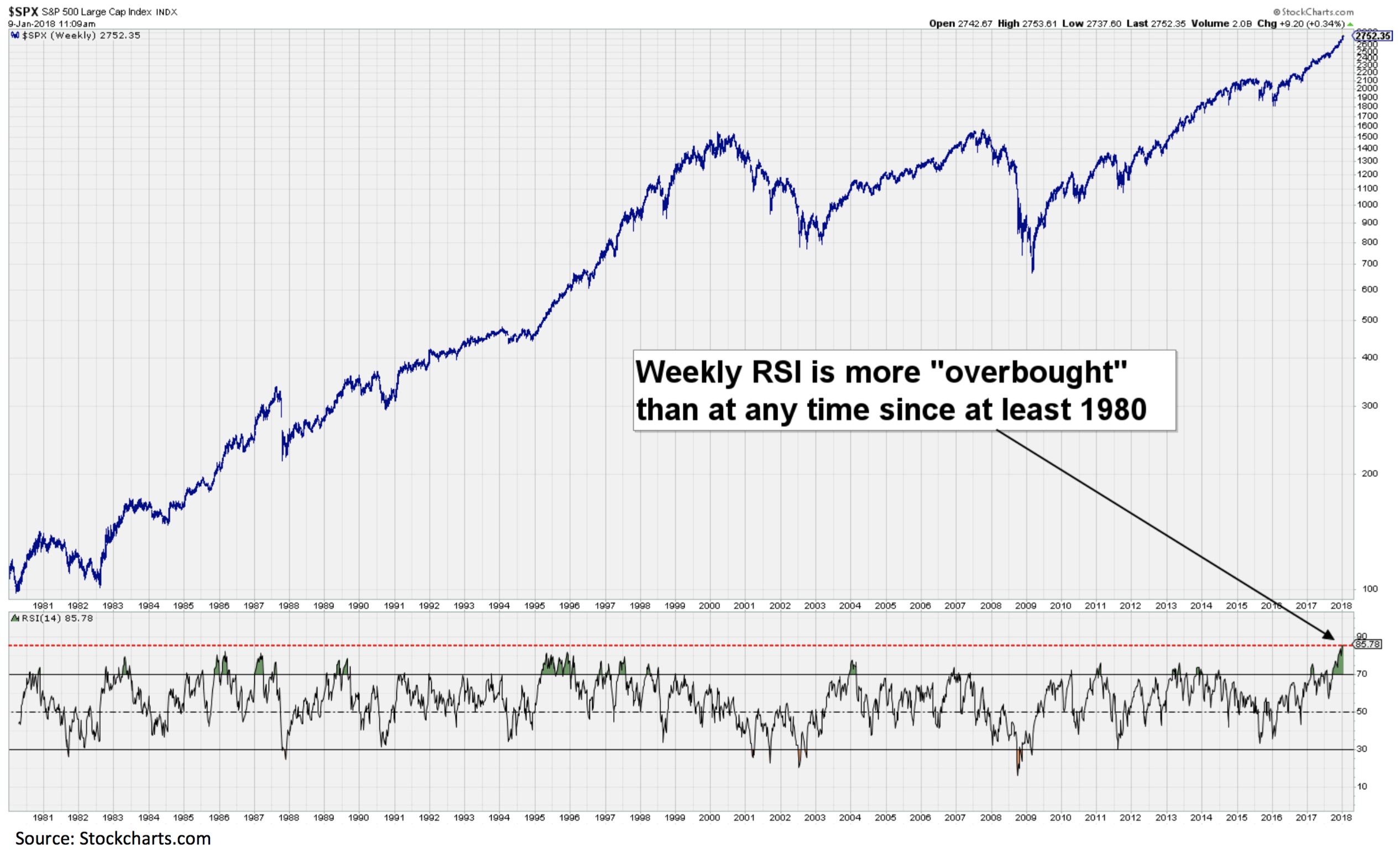 Investors Getting More Bullish
The average investor does appear to have become more optimistic about the stock market. The percentage of bullish respondents to the weekly AAII investor survey has hit its highest point since late 2010 at just under 60%, perhaps a sign that investors have finally come around on the positive narrative. Interestingly, a switch of the calendar may bring out the optimist in people, as it does appear that the turn of the year has often resulted in a short-term peak in the bullish readings. Noticeable declines shortly after a new year have been the norm going back to 2009 (see down arrows).

10-Year U.S. Treasury Rate Also Moving Up
The benchmark 10-Year U.S. Treasury yield has experienced its own recent increase and now draws closer to what is expected to be critical resistance around the 2.60% level. This zone stopped the 10-year back in late 2016/early 2017 and could test it again. A break above there would, naturally, be a sign that rates are expected to move higher going forward.

Potential Major Breakout in Oil Prices
We have talked quite a bit about the run-up in oil prices over the last few months, but the $62.50 level in WTI was expected to be a major resistance test for the commodity. Well, that zone was sliced through yesterday in what could be a very bullish sign for oil. Ideally, it is now able to close the week above that threshold to help confirm the breakout. WTI is now at its highest point since late 2014, and the next potential resistance area may be around $65 where a couple of more minor resistance lines sit.

U.S. Dollar Index Finding Support Once Again
The U.S. Dollar Index has threatened to break down below major support, but, so far, the zone between 91 and 92 is holding and even forcing a small bounce. Since the dollar has such a large impact on so much, commodity prices included, it is worth watching very closely here.

Keep A Close Eye On The US Dollar 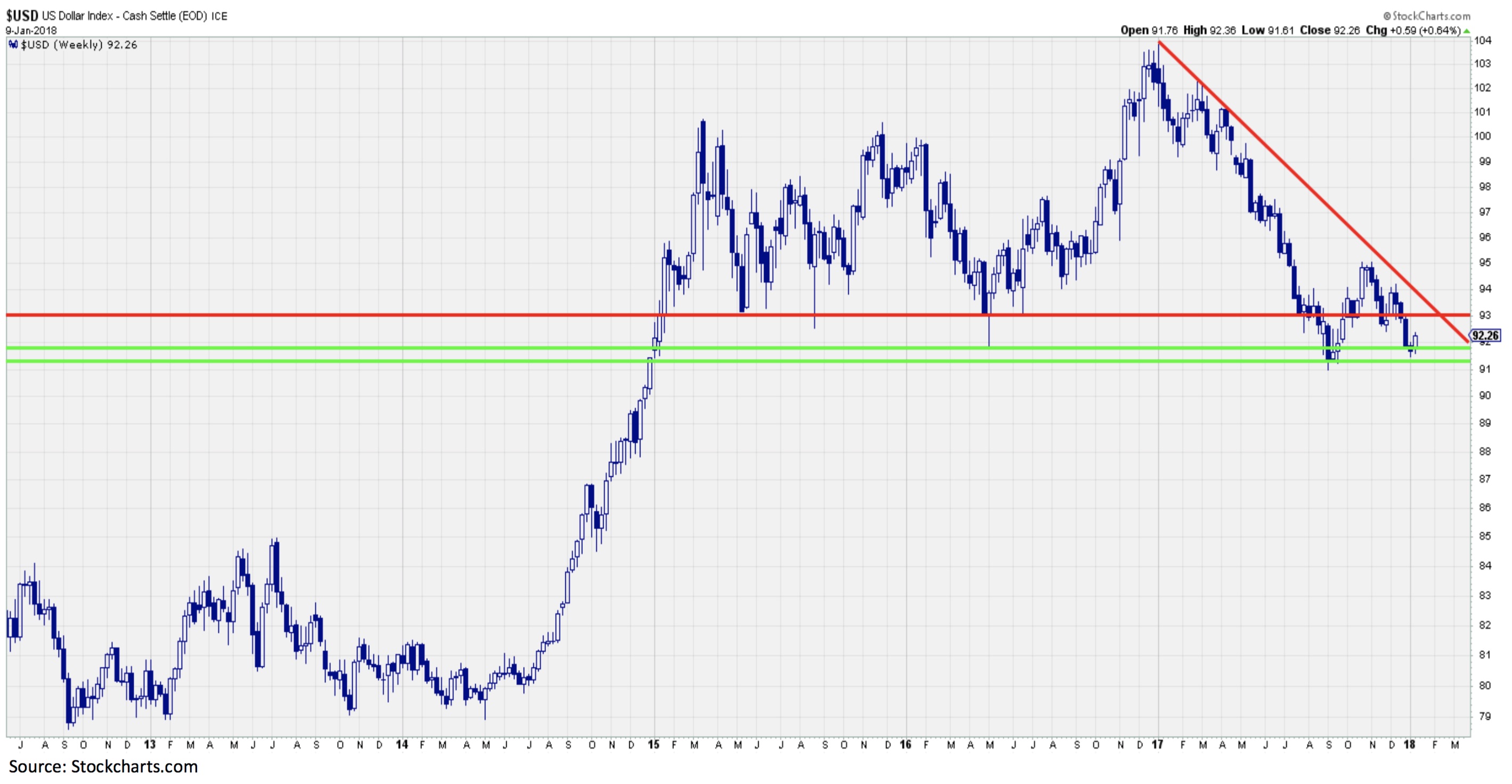 King World News note:  A breakdown in the US dollar will send the gold and silver markets exploding higher.  Adams is right, keep a close eye on the dollar.

Here is a portion of today’s note from legend Art Cashin:  Gurus Disagree – It Appears – Bill Miller sees a bump in rates as a possible stimulus to the stock market. Jeff Gundlach appears to see just the opposite. Here’s a bit of what CNBC wrote on their positions.

Worried about higher interest rates putting a dent on the stock market’s rip-roaring rally? Fear not, a rise in rates will actually help stocks, according to legendary investor Bill Miller.

“Those 10-year yields go through 2.6 percent and head towards 3 percent, I think we could have the kind of melt-up we had in 2013, where we had the market go up 30 percent,” Miller, the founder of Miller Value Partners, told CNBC’s “Closing Bell” on Tuesday. “If we can get the 10-year towards that 3 percent level, you’ll see the same thing.”

“In 2013, people finally began to lose money in bonds. They took money out of bond funds and put it into equity funds,” Miller said.

Miller is considered one of the best investors ever, after beating the market for 15 years in a row while working at Legg Mason.

And then on Gundlach:

While U.S. stocks are now in an “accelerating phase,” billionaire investor Jeffrey Gundlach is predicting that the S&P 500 will post a negative rate of return in 2018.

One of the best investments for 2018 will be commodities, Gundlach, chief executive of DoubleLine Capital and known on Wall Street as the “Bond King,” said on an investor webcast on Tuesday.

Gundlach said his bearishness on the S&P and other risk assets including U.S. corporate bonds stems from the notion that the Federal Reserve has begun its era of “quantitative tightening.”

No wonder it’s so tough for us mere mortals.

Overnight And Overseas – In Asia, equity markets are rather mixed in modest moves. Japan and India are down slightly, while Hong Kong and Shanghai were up a bit.

The key Asian action may be in bonds. After the BOJ appeared to taper its bond purchases yesterday, there are some signs around that the tapering may be continuing. Equally important are reports that China is considering cutting back, or even ending, purchases of U.S. Treasury bonds. Some cynics think that may just be “posturing” in front of possible tariff moves by Trump. Nonetheless, the rumors are pushing yields higher.

In Europe, stocks are generally lower. In London fractionally so with moderate losses on the continent.

Among other assets, gold is up slightly but remains in an apparent resistance band. Crude is a bit higher on an inventory dip. The euro is higher against the dollar and yields are higher in line with developments in Asia.

Consensus – Bond yields look like they will move to the forefront in traders’ minds. A key question is why China appears to be paring back on U.S. Treasuries. I think it may be a negotiating ploy.

King World News note:  As Cashin noted, gold is still caught in a “resistance band.”  If gold breaks out of that band to the upside it will ignite some short-term fireworks.

***ALSO JUST RELEASED:  ALERT: This Is What Will Trigger A Big Surge In Gold & The Mining Shares CLICK HERE.