As we kickoff trading on the final day of November, here is an important look at the US dollar, gold, silver, fear, greed and euphoria.

November 30 (King World News) – Peter Boockvar:  Add the Citi Panic/Euphoria index to the list of sentiment gauges that are at a bullish extreme. The weekend’s reading rose to 1.10 from .87 and that is back to the August high when it printed 1.13. Anything above .41 is considered ‘Euphoria’ so we are now almost triple that. 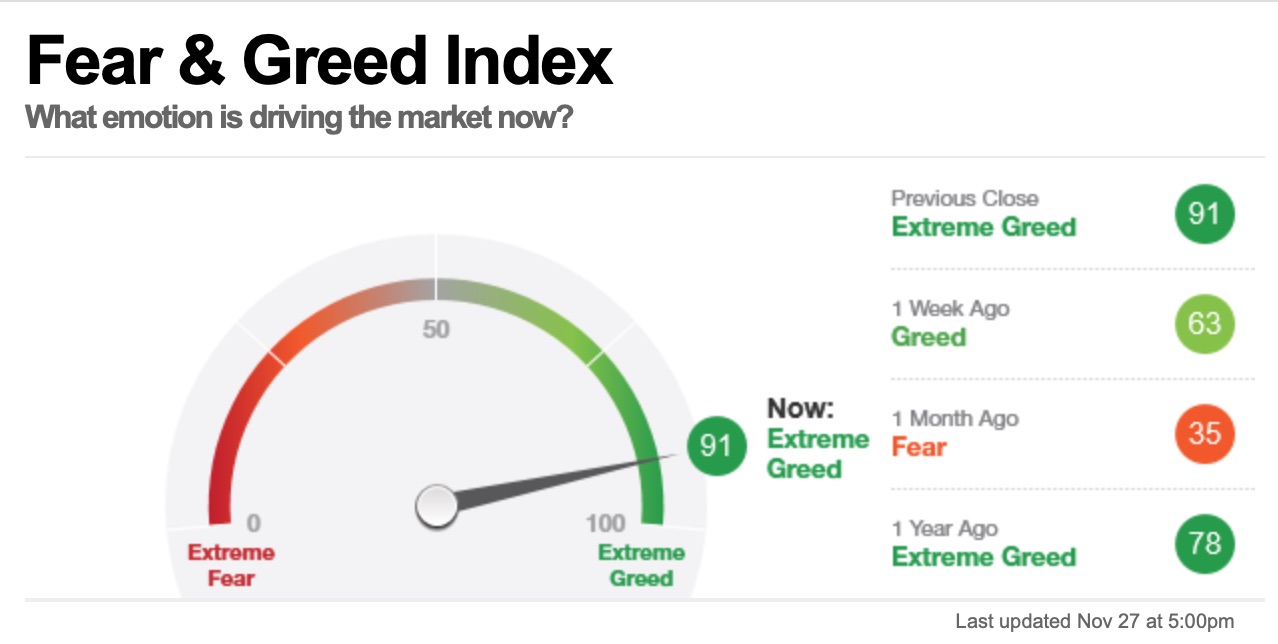 Bears were 27.5, the 2nd lowest since February 2020. We know II saw Bulls almost at 65 and Bears near 17. Bottom line, when trading short term it is always important to be aware of one’s market surroundings and the Bull boat right now is standing room only…

US Dollar, Gold & Silver
The US dollar is further breaking down, now approaching 91.5 with the DXY, a level last seen in April 2018. Any move below 88.6 would put it at the lowest level since December 2014. The REAL 5 yr yield is at the lowest in 2 1/2 months and when you combine the two gold and silver should be much higher but instead are continuing its correction on the mistaken belief that they are a safety trade. Half the demand for silver is industrial and look at what copper is doing, it is trading at the highest level since late December 2013.

Looking at the 14 day Relative Strength Index has gold the most oversold since August 2018.

John Lewins:  “Eric, we just reported some additional results from development we are doing on the Judd vein. Judd is a parallel vein to Kora, and as you know Kora right now is close to 5 million ounces of 10 gram per tonne resource that we are currently mining. We have been Mining Kora for three years and it has averaged 15+ grams per tonne of gold.

Judd sits parallel, about 200 meters away from Kora. We just reported the second set of results from Judd and it was 223 meters of continuous development right on the vein. The last 114 meters of development averaged 3.7 meters of 13.6 grams per tonne and we are seeing a pickup in grade to the South. The last face we announced was 5.5 meters at 110 grams per tonne. We also had an intercept of 7.25 meters at 256 grams per tonne, 25 meters above and 25 meters south of that face. This was one of the ten best gold intercepts in the world this year. This is a vein that doesn’t have a single ounce of resource.

So we are now evaluating this new vein system at Judd, and it has a strike length similar to Kora — a 2 kilometer strike length. And it is literally right next to our underground development just 50-100 meters away. Importantly it has the potential to be another Kora. Certainly these initial results are quite frankly outstanding.

We will also be announcing record throughput and ounces of production from Kora. So we are seeing great success with the drill bit from exploration, but at the same time production is ramping up as a result of our investment that has doubled our production. K92, stock symbol KNT in Canada and KNTNF in the US.