Today the man who has become legendary for his predictions on QE, historic moves in currencies, and major global events warned King World News that the U.S. launch of QE4 this year is going to trigger a frightening bond and currency collapse, hyperinflation and skyrocketing gold and silver.

Egon von Greyerz:  “Eric, we are now starting to see the signs that will trigger an end to the most massive financial bubble in the history of the world….

“Gold and silver move in anticipation of economic events, and some of the indicators I look at are flashing major warning signals.

Take, for example, M2, which illustrates the money supply in the U.S. and also the velocity of money.  The money velocity is continuing to crash and it’s now at an all-time low dating back over 50 years (see chart below). 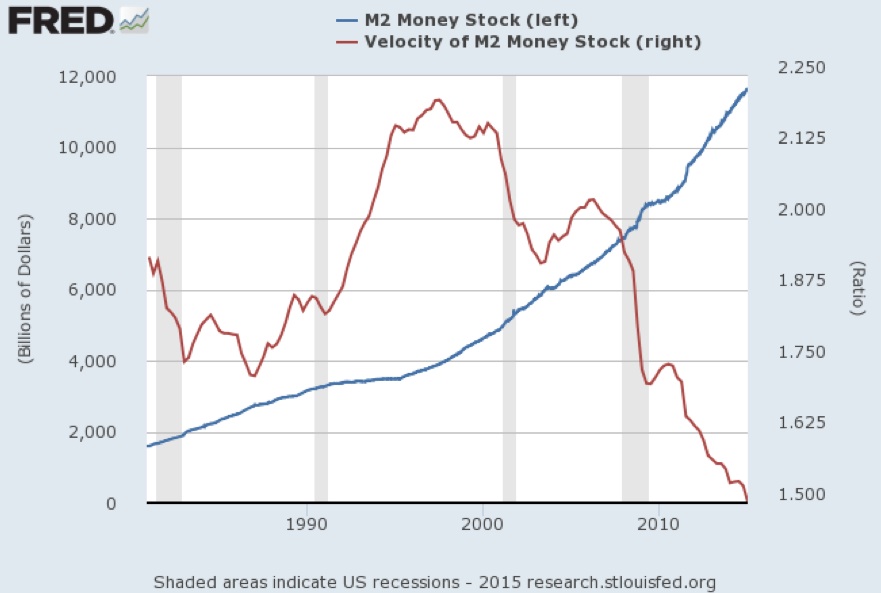 While The Money Supply Continues To Soar

But the M2 money supply has almost tripled since the year 2000 (see above).  This is the result of the massive money printing and credit creation that we have seen in the last 15 years.  But with the velocity of money crashing during the same period, it means that the money created is not being spent; instead it’s sitting in the banks.  The banks are not lending because they need to prop up their balance sheets.

The low velocity of money we are now seeing reveals that economic activity is extremely low.  The sluggish economic activity means that we will see slow growth or even deflation.  And of course deflation is enemy NO. 1 of Western central banks and governments.  For example, the PPI (Producer Price Index) in the United States was 0.4 percent, and GDP in Q1 was negative.  I believe that GDP for all of 2015 will be negative as a whole.

The U.S. Will Launch QE4 This Year

The point I am making, Eric, is that the Fed cannot tolerate this low velocity of money or deflation, especially since all economic indicators are worsening.  This is why we will see QE4 in the United States this year and that will most likely be perpetual.  The combination of massive debt and low interest rates clearly breaks all economic laws.

Collapse Of The $100 Trillion Bond Market, Currencies And Hyperinflation

The bond markets worldwide are now smelling enormous risks.  This is exactly why bonds are crashing and yields are going up.  But this is of course only the very beginning of the collapse of the $100 trillion bond market, which is the biggest financial bubble in world economic history.

In my view, an accelerated fall of bonds will start in the autumn.  The problem is that there is no liquidity now and rates are higher.  This will create an enormous squeeze as investors in ETFs and other funds start to redeem.  So we may witness the most incredible liquidity squeeze later this year.  If that happens, central banks worldwide will open the money spigots.  The vicious circle of falling bonds and stocks, accompanied by endless money printing, will lead to collapsing currencies and hyperinflation.

As you know, Eric, I have predicted that the dollar will be the next currency to fall in the race to the bottom and that is exactly what is happening right now.  Precious metals investors are now sensing the Western central bank desperation.  They is why we are seeing a big rise in gold and silver in the last couple of days.  So far this has primarily been a dollar move, with the metals moving up against the dollar but not against the euro or the Swiss franc.

But this afternoon, gold and particularly silver are now moving up in all currencies.  This current upside move will continue but a massive upside move is likely to occur in August and September.  In fact, autumn should mark a major reversal in all markets.  This will be the beginning of tremendous falls in stocks, bonds and the dollar, and big rises in gold and silver.

Surge In Silver Price To Shock The World

Silver is now strongly outperforming gold.  The gold/silver ratio has gone from 30/1 in 2011, to 76/1 at the end of last year.  But that ratio has now fallen to under 70 today, which is a level not seen for over six months.  I expect silver to outperform gold by a big margin in coming months.

The silver market is an extremely small market.  The annual production, including scrap, is only around $18 billion.  And over 90 percent of that is absorbed by industrial uses.  So that leaves very little available for investment purposes.  We are talking about roughly $2 billion, which is miniscule in relation to world financial assets.  This indicates that when demand for silver starts increasing, there certainly will not be any stocks available in the physical market.

The bottom line, Eric, is that the risks in the world are massive, and the bubbles are bigger than ever.  So accumulating and holding physical gold and silver against these enormous risks is absolutely imperative.” ***ALSO JUST RELEASED: The Biggest Gamble In History By Central Banks Has Already Resulted In Massive Losses CLICK HERE.