Here are two of the greats discussing the coronavirus, China’s stock market panic, the Fed’s role and more.

Coronavirus And The Fed
February 3 (King World News) – Peter Boockvar:  My friend Jon Basile, the head of Global Macro at AIG, said it well last week. “WHO and CDC are more important acronyms now for markets than ISM and GDP.” ‘Now’ is also a key word here because this will pass but with the obvious unknown of how much business and lives are lost until then. We do by the way see the January ISM today and it might just capture some of the immediate impact of the spreading virus but likely not much.

Markets again think the Fed will come to the rescue in the face of any economic slowdown from here. It’s almost like a rate cut and/or expansion of their balance sheet is a vaccine that can cure any economic ill. The December fed funds futures is yielding 1.155% right now, thus assuming about an 88% chance of two rate cuts by then and with the January 2021 contract yielding 1.115%, assume 100% around then. My friends at Quill Intelligence last week to this said “permanently subduing volatility and denying markets a relief valve to clear out malinvestments, further conditions investors to expect a growing response from the Fed…Keeping volatility in check is what the Fed is targeting to elongate the business cycle.” In this case we’re talking about market volatility, aka asset prices.

As measured by the St Louis Fed’s Financial Stress Index, in its history dating back to 1992, it has never been more inoculated by the Fed with easy financial conditions. The lower the level, the less stress.

What is also becoming apparent, the Fed’s rate cuts already in place had about zero impact on economic activity because they are already so low and thus was never a binding constraint on activity prior to the rate cuts. You’ll say to me, ‘well what about housing’ and I’ll say that the drop in long rates which the Fed doesn’t directly control is what has lowered mortgage rates and has helped housing and that fall in long rates is in response to slowing economic growth globally mostly (the self correcting mechanism that is free markets)…

C&I loans outstanding have fallen to a y/o/y growth of just 1%. Capital spending is punk. Low rates have done nothing to help global trade. Auto sales, obviously sensitive to changes in rates, have not accelerated and consumer spending, as seen in Q4 was ordinary. My point here is that while the Fed is doing the only thing they know, diminishing returns end up being the result when you don’t have many rates to cut from an already low level.

I purposely don’t use this venue to talk politics as I rather talk policy but I just want to say this ahead of the Iowa caucus today and the primary’s to come. There is the belief of some that if Bernie Sanders does well and gets the Democratic nomination that it would be a bad thing for the economy and markets. I firmly agree if he ends up being President that would be the case but I’m of the assumption that he has just about zero chance of winning a Presidential election so the markets instead should assume that Trump gets reelected the better Sanders does, whether you like that or not. 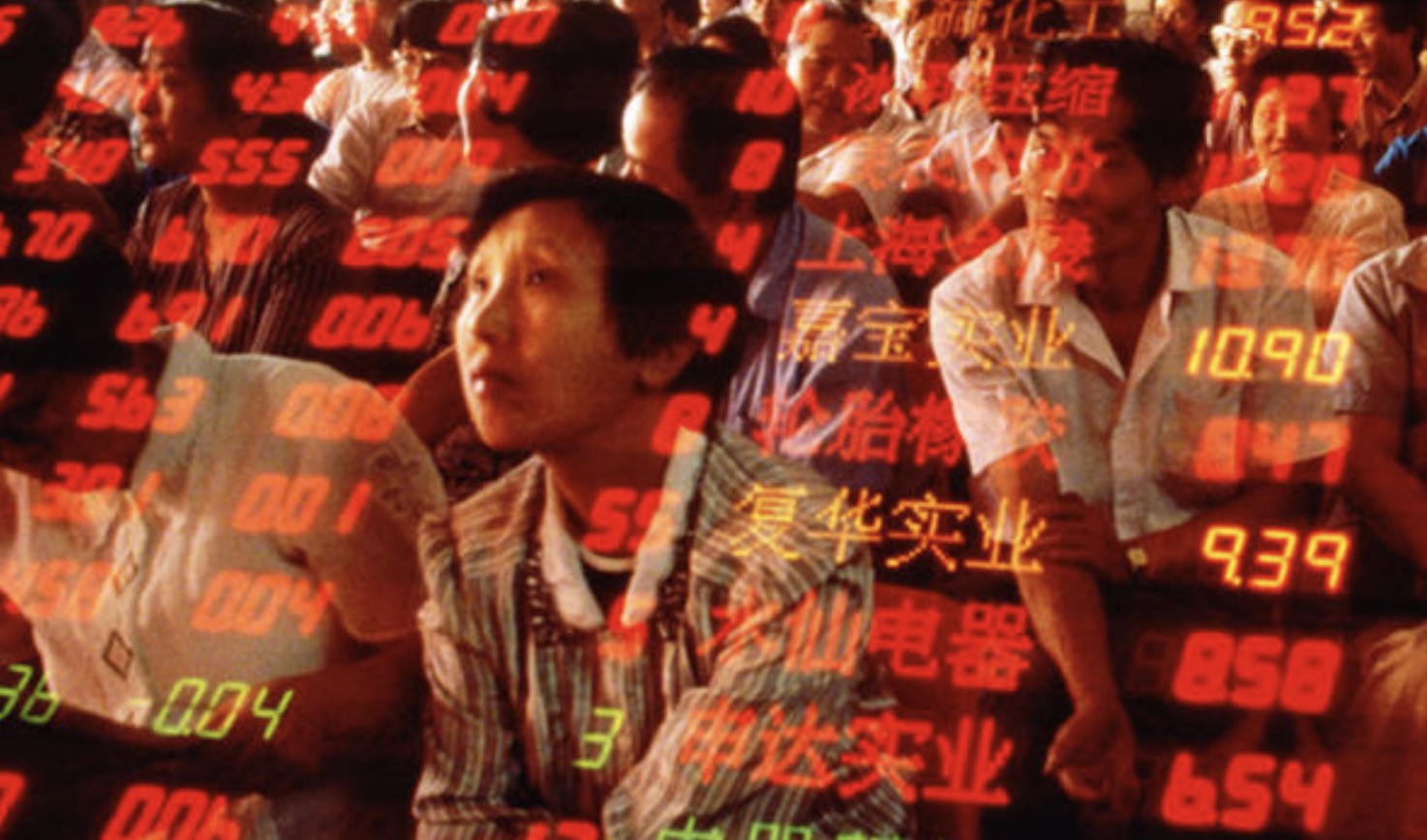 China Stock Market Panic
The Shanghai comp fall of about 8% was around the drop seen last week in the Shanghai futures. Also, a lot of the fresh reverse repos the PBOC conducted just offset maturing ones but they did cut the rate by 10 bps. The PBOC said it wanted to “ensure ample liquidity during the special period of virus control.” That monetary vaccine again. The offshore yuan is back above 7.0.

Here are some of the January manufacturing PMI’s that we saw today overseas but really unknown as to how much impact the virus spread is having. China’s Caixin index (survey taken before the this all took place) fell to 51.1 from 51.5. Caixin said simply, “Manufacturing demand continued to grow at a slower rate, while overseas demand was subdued.” There was though some light on the hopes that the US/China trade deal would result in clarity, “business confidence continued to improve, with the gauge for future output expectations on the rise and tending to recover after two years of depression, due chiefly to the phase one trade deal.” Of course we can now throw this data point out the window as the Chinese economy shuts down in some places.

Quantifying the major disruptions seen in Hong Kong, Q4 GDP there contracted by 2.9% y/o/y and .4% q/o/q, not as bad as the 3.9% and 1.5% decline that was expected. On a q/o/q basis, this is the 3rd straight quarter of declines. Now we can throw the virus situation on top of this and we assume Q1 will see a contraction again.

Turning to Europe, their manufacturing PMI for January was basically left alone at 47.9 from the initial print of 47.8 but which is up from 46.3 in December. This is now 12 months in a row of below 50 reads but the best print since early 2019 has given hope to green shoots. Markit said, “Most encouragingly, order books moved closer towards stabilization, falling to the smallest extent since late 2018. With the survey indicating the steepest fall in warehouse stocks since September 2016, the new orders to inventory ratio, a key forward looking indicator for factory production, surged to its highest for nearly 1 1/2 years.” What the impact will now be from the deterioration in the Chinese economy, Germany’s largest trading partner, is of course the wild card for now.

The UK manufacturing PMI was revised to 50 from 49.8 prior and up 2.5 pts from December. That’s the 1st time it has a 5 handle since April 2019 “as receding levels of political uncertainty following the general election aided mild recoveries in new order intakes, employment and business confidence.” What’s to come now though with the UK officially out of the EU are trade deals and that will be a bumpy ride. Reflecting those expectations has the pound down sharply today. The EU negotiator Michel Barnier and UK PM Johnson are already battling. I continue to like UK assets.

Art Cashin on the Coronavirus and more…

Art Cashin:  On this day in 1468, one of the most influential figures in the last 2000 years (and maybe all of history) died. To keep things in perspective try to remember a few things: Leonardo Da Vinci was seven years old, Michelangelo had not been born yet and a guy named Christopher Columbus was just a teenage apprentice on a Genovese Ferry.

The deceased was Johann Gutenberg….yes the inventor of moveable type….and thus printing….and thus knowledge for the common man. So, you say, let’s hear about his grand and laudatory funeral.

Well, the man who changed much of history died blind, poor, and virtually unnoticed. Now, before you cynically assume this dismal end was the result of the failure of early printing, check again. Gutenberg’s printing was a winner from the get go. He started it in 1450 and within five years the Gutenberg Bible was almost due. Also due, however, was a loan to a certain Johann Fust (seed money for the print shop). Fust knew a good thing when he saw one and refused to extend the loan for one day. In default, Gutenberg handed over the print shop (type, press, paper, coffee-pot) to Fust who completed the Bible and became fabulously wealthy.

Remember, if you’re thinking of inventing the next Facebook or Twitter, remember that Revolutionaries are sometimes killed in the Revolutions they start.

The U.S. stock market faced a bit of a revolution on Friday. Historically, Friday has an upward bias as shorts tend to reduce risks in front of two, or more, days of not being able to react in markets. The shorts tend to be more nervous than the longs, since if you are short, your risk is theoretically infinite whereas a long can lose what you have on the table.

The Dow gapped down on the opening, weighed down, in part, by negative guidance from the likes of Caterpillar, Exxon and Visa.

Post-opening, the selling continued and, to some degree, intensified as negative projections on the coronavirus continued over the day.

Traders assumed that part of the negative motivation was a fear of what might happen when Shanghai reopened after a week off. Overnight action suggests that the concerns about Shanghai may have been well placed.

The selling continued over the course of the session in an almost relentless fashion.
We may need a few days to repair some of that technical damage. Headlines continue to rule.

The Coronavirus – A Critical 1 to 3 Weeks – Floor traders will continue to watch the headlines but they will also be watching the calendar. The virus is believed to be contagious for one to two weeks (see U.S. 14 day quarantine of travelers).

Remember, we don’t need to stamp out the virus to end the panic. We only need to see the numbers stop growing for a few days. Next weekend’s reports may be critical

Overnight And Overseas – The Shanghai reopened after a weeklong closure for Lunar New Year. It plunged the equivalent of a 2300 point move in the Dow. It might have been down more but many stocks were halted when they traded “limit down”. The Chinese authorities added reserves to the banking system to stem potential damage. Hong Kong closed fractionally higher. Japan fell moderately, while India was modestly higher.

Stocks in London, Paris and Frankfurt are trading somewhat higher in rather light trading.

Among other assets, Bitcoin has moved modestly lower and is trading just above $9300. Gold is a shade lower while crude has firmed slightly on the back of proposed cuts from OPEC. The euro is somewhat lower against the dollar and yields are a bit higher.