Time for gold’s daily cycle low, so much negative sentiment, apartment rents and cooling off.

Gold
August 30 (King World News) – Graddhy out of Sweden:  Gold is now back at blue trend line. It has a bullish reversal candle at present and is in timing band for a daily cycle low. Let’s see. 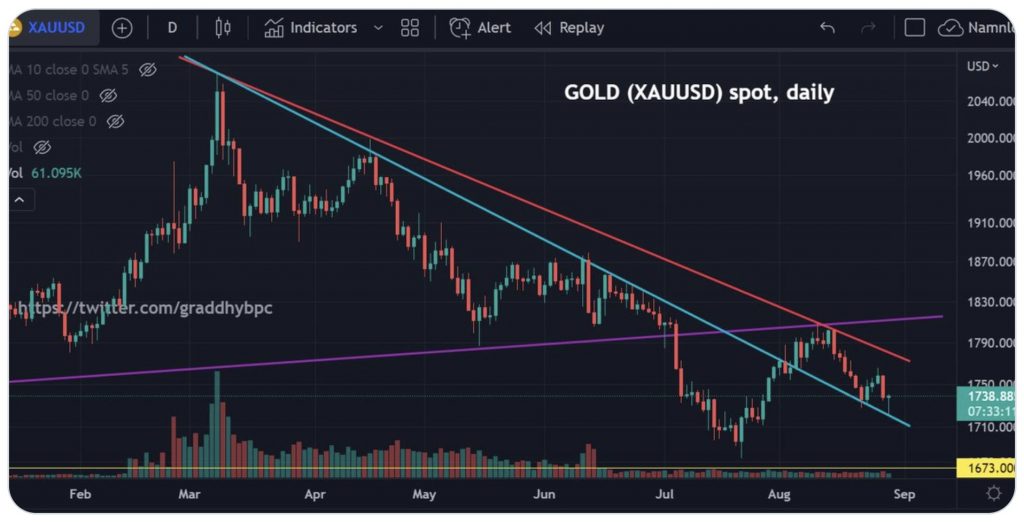 Breaks To The Upside
Graddhy out of Sweden:  This very big picture ratio chart is down at blue support line again. And looks like it is forming a rising triangle, which mostly breaks to the upside. The big moves start when above black line. This chart shows that the pm bull is still in its infancy. 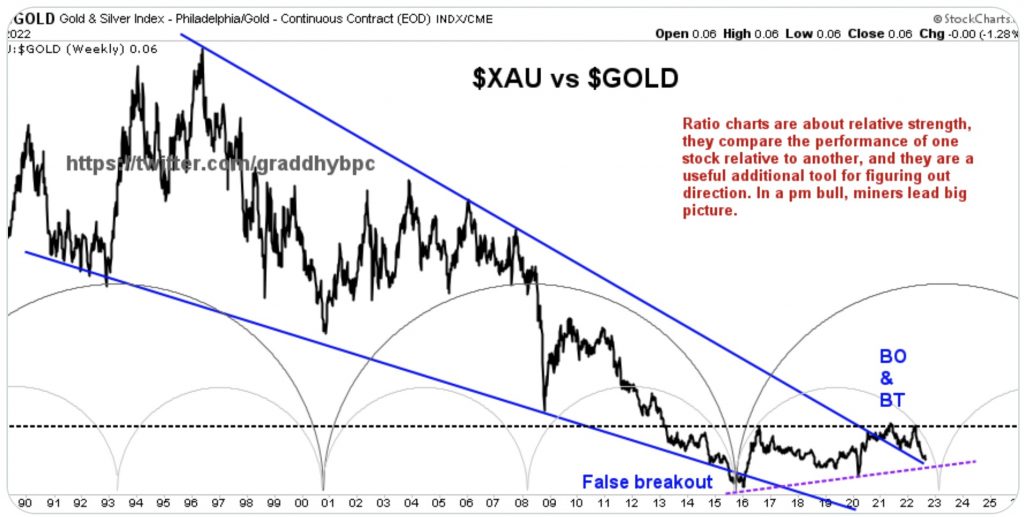 Burr
Art Cashin, Head of Floor Operations at UBS:  On this day in 1807, a circuit court in Richmond, VA acquitted a man of the charge of Treason against the United States. What made the trial remarkable was that just three years before the defendant had been the Vice President of the U.S. (and less than seven years before his acquittal he had lost the Presidency itself by just one vote).

His name was Aaron Burr and he had been charged with Treason by Thomas Jefferson, the president under whom he had served and the man he’d almost beaten for the presidency.

Burr had been a Revolutionary War hero, and was considered brilliant even by his enemies. But when he shot Alexander Hamilton in a duel, his career went into a tailspin. (Ironically, Burr had saved Hamilton’s life during the War.)

Jefferson, based on a report from the commanding general of the U.S. Army, charged that Burr planned to take a band of armed men down the Ohio river to the Mississippi and seize much of the west.

When the case came to trial, the main witness, James Wilkinson (the aforementioned Commanding General) was less than persuasive. It turned out Wilkinson had been a key part of the alleged plot (and he seemed to be selling information to foreigners – – all on his own). There was some hard data that Burr had arranged to store arms on a river island not far from Marietta, Ohio. But the court said – – “Not Guilty”.

Burr may have won in court, but his enemies got him back in the history books. To this day, you say Burr and most folks think of a guy who would take a hot stove, if it were offered (or maybe just left unguarded). But legal victories and reputations don’t always coincide.

Global Equity Markets
Overnight, global equity markets are mostly trying to do better. In Asia, Japan and India are the upside standouts although the gains are moderate rather than blowouts. China related markets are somewhat mixed as we still try to figure out some of the political shifts that are going on there and the debate about the Covid policy.

In Europe, markets are doing a little bit better. Some of that has to do with, as we stated previously, the fact that the rivers are a bit more navigable and that temperatures are moderate, which allows for supplies, particularly natural gas to build a little bit better.

The U.S. futures, as you can see, as dawn hits Manhattan, are showing the Dow up about 200 points. So, we will wait to see if that continues to fit in with Jonathan Stephens idea that we would see an interim low in any one of the first three days of this week and, the other thing going for us is those Friday selloffs without a bounce-back on Monday, often produce what we used to call a Turnaround Tuesday. Let’s see if the bulls manage to navigate the bus safely.

The calendar is somewhat undramatic. We have two or three Fed speakers. We get some housing data early in the morning along with consumer confidence and the JOLTS data in late morning, but it may be more about the market internals. So, we will continue to watch.

Also, there are reports that the U.S. may be sending missiles and other armaments to Taiwan, which raises the question, how much of a parallel to 1962 do we want to have? As we stated yesterday, in the fall of that year, the two most powerful nations on earth went head to head over a dispute involving a rather large island that was close to the border of one of those two nations. Some of those parallels do not hold up to well.

At any rate, cross your fingers for that Turnaround Tuesday. You know the drill. Because of geopolitical concerns, stay close to the newsticker. Keep your seatbelt tightly fastened. Stay nimble, alert and above all try to stay safe.

Cooling Off
Peter Boockvar:  Whether it’s because of the talk of price caps yesterday (bad idea) or growing hopes for enough gas in storage ahead of schedule, we’re seeing relief for a 2nd day in European gas and power prices. The price of one month TTF natural gas is lower by 5% and almost back to where it was two Friday’s ago, though still up 30% this month. German power prices one yr forward is down by 15% and also has almost given back last week’s spike, though still up 66% this month. European businesses and households will of course take any relief they can get at this point but this is really an alarming situation as the weather will soon get cooler…

In turn, bond yields are lower in European after yesterday’s jump. Also helping was a still very high but in line Spanish CPI for August. Prices there rose 10.3% y/o/y vs 10.7% in July. But, core price gains accelerated to 6.4% from 6.1% last month and that is the highest in 29 years. We’ll see Germany’s August CPI and the regional figures seen so far this morning are still very high y/o/y but slower m/o/m for the sole reason of a tough comp as prices spiked in July.

Not surprisingly in light of the dangerous energy squeeze, August Economic Confidence in the Eurozone fell to 97.6 from 98.9 and that matches the weakest since January 2021. 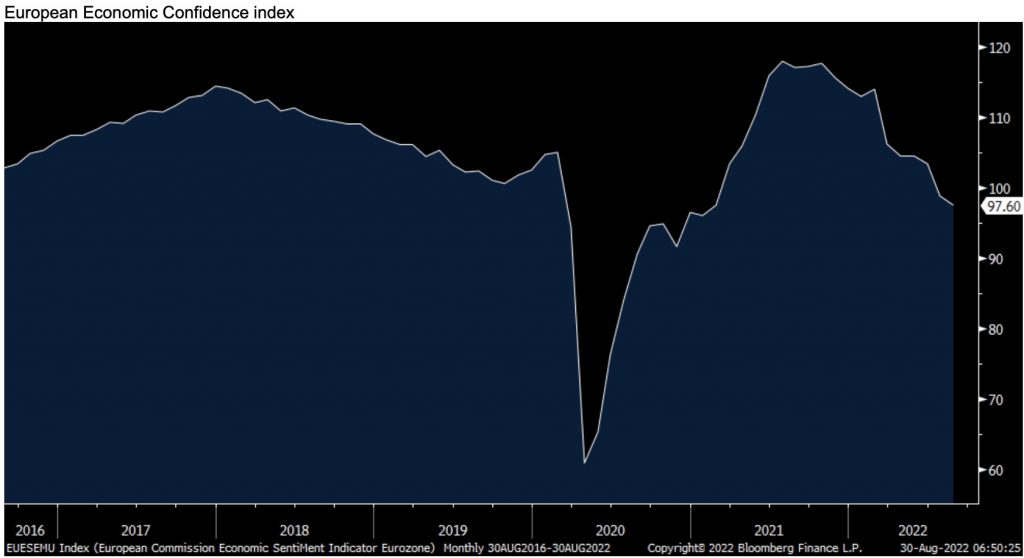 The manufacturing component has fallen all the way down to 1.2. It was 9 in March and 13.2 in January. The services component hung in because of the lift we’ve seen in leisure/hospitality spending but it too softened to 8.7 from 10.4. It was 11 in January. Consumer confidence was a bit less bad while retail and construction confidence improved a touch. These data points are not market moving but we know the stress the region is under.

So Much Negative Sentiment
There is just so much negative sentiment towards Europe and what is going on there, deservingly so right now, but I can’t help believing that maybe we’ve now priced it in based solely on my contrarian mindset. On the drop in energy prices, the euro is back above $1.00 and the DAX is higher by almost 2%. If just maybe we’ve seen the peak in energy prices there (we’ll of course have to wait until winter for confirmation), the euro is a stomach turning contrarian buy, as are European stocks. But I have little confidence yet that the top is in.

On last thing on Europe, the ECB chief economist Philip Lane, another one who badly missed the inflation story, is today saying “we need to keep raising interest rates.” Off zero that is not saying much but I think he’s only on board for a 50bps hike next week and not 75 bps as hinted at over the weekend by some in Jackson.

Apartment Rents
Apartment List released its September National Rent Report today and said new rents in August rose .5% from July. That is half the gain seen in July but said “that follows a typical, pre-pandemic trend.” Rents year to date are up 7.2% vs 14.8% seen at this point last year. On a y/o/y basis they are still up 10%. 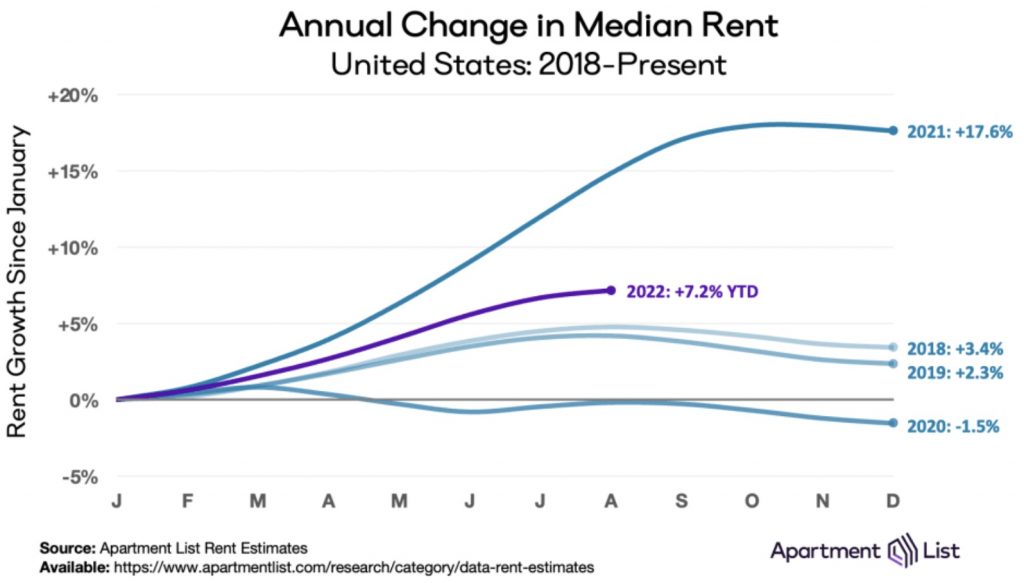 Because of more supply, the vacancy rate did tick up to 5.1%. It was as low as 4.1% last fall but still remains under the pre-covid pace of 6-7%. Apartment List speculates this “to spiking mortgage rates that continue sidelining first time homebuyers and keeping more households renting for longer.” So, the positive here is that rent growth is moderating but it’s still rising at a fast pace, much quicker than before covid and well above the rate of wage growth. San Francisco metro by the way has finally regained its March 2020 rent level, the last city to do so but areas within (like San Francisco downtown, Palo Alto and Oakland) have yet to do so.