Gerald Celente:  Oil is on a tear. Gold is shining and the global equity markets remain volatile…

The Real Reason For Oil’s Rise
Combined factors of massive wildfires surrounding the Alberta, Canada oil sands hub of Fort McMurray; economic and political turmoil in Venezuela that has added to supply disruptions; a dramatic 40 percent decline in Nigeria’s oil production following a rebel attack on pipelines and oil facilities, have driven prices higher … not the supply and demand fundamentals of the global economy.

Indeed, supply from the Organizations of Petroleum Exporting Countries (OPEC) rose to 32.44 million barrels per day to the highest levels since pre-recession 2008. And Iran, which “experts” predicted would not meet its output projections following the lifting of sanctions, has surpassed them, hitting 3.6 million barrels per day according to the International Energy Agency.  And with nations such as Saudi Arabia – whose debt rating was just cut by Moody’s as a result of low oil prices – said it will increase output this year above last year’s highest level of output on record.

Trend Forecast:
The outages and disruptions in Canada, Nigeria and Venezuela are, for the most part, temporary and fixable. With oversupply outstripping daily demand by some 1.5 million barrels per day, in the absence of increased demand, particularly from China, which looks doubtful considering its negative Manufacturing Purchasing Manager Index and negative import/export data despite excessive stimulus, we forecast oil prices to trend between $30 to mid $40 per barrel range. Should major geopolitical conflicts and civil disorder erupt among and/or within oil rich nations, oil prices will of course spike higher.

Even The Banksters See Gold Ascending
With gold demand up some 21 one percent this year according to the World Gold Council, and gold prices up over 20 percent since the start of the year, even the banksters see gold glowing.  Among them, JPMorgan Private Bank’s Solita Marcellli said, “We’re recommending our clients to position for a new and very long bull market for gold.”

And, in a world of negative/low interest rates – and low expectations for them to rise – gold, while providing no yields, performs better in a safe-haven investment climate.

Trend Forecast
We maintain our forecast that should gold stabilize above $1,400 per ounce, we anticipate a sharp gold spike toward $2,000. 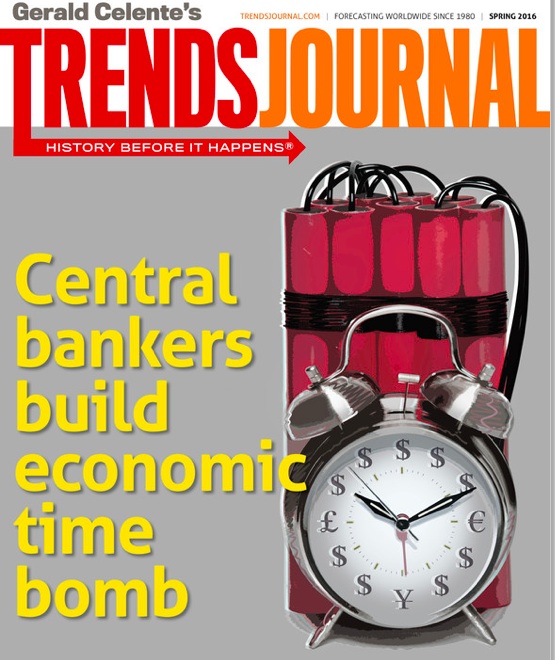 Fuse Lit On Equity Markets Time Bomb
Central Banks, as documented in our current Trends Journal, have lit the fuse on an economic time bomb that is ready to explode. And, as evidenced by current market volatility and investors pulling $90 billion out of global equity funds since the start of the year – the fastest pace of retreat since 2011 – there is growing panic on the Street.