With the Dow trading above 17,600, the Nasdaq close to 4,700, oil at $74.50, and gold near $1,180, today King World News is pleased to feature an incredible chart that has not truly reversed course in over 3 years.  This extraordinary chart is now closing in on 30-year highs.

Here is the latest Investors Intelligence report along with the all-important sentiment chart:  The November stalling continued last week with only fractional gains for most indexes. They did include more highs but their charts were little changed with overextended vertical P&F rallies from mid-Oct lows. Oscillating indicator gains have also halted and the last few sessions had the first cautionary downturns. There was little change either for most newsletter stances after the recent large bullish shift. More optimism is needed before a new top.

There was another small increase for the bulls to 56.4%, from 55.5% a week ago. They are now up 21.1% from mid-Oct and nearly back to the 57.6% reading from the start of Sep. The bulls hit their 2014 high at 62.6% early Jun. If the current market pause is followed by a new rally the bulls could exceed 60%. Bulls above 50% show increasing risk while +60% levels point to near fully invested outlooks that usually precede a stock market top. Their Oct low showed they had raised cash which has now been put to work.

After only a minimal change the bears were 14.9%, compared with 14.8% last issue. The quick return to index highs makes the bear case difficult to defend. The Fed has ended stimulus and the stock market failed to crash. Now some bears express major concerns for deteriorating world economies as reasons US stocks are due for a tumble. They also mention the now lengthy period without a significant market selloff.

With more bulls and bears there had to be a decline for those projecting a correction, down to 28.7% from 29.7% last time. The mid-Oct reading of 46.5% was a 30-year high. Often lofty correction counts occur at a trading bottom. The strong recovery saw many shift back to bulls and engaging in new buying. Advisors in this day and age make quick opinion shifts, reacting to market swings and world news. A further decline for this group should occur if stock gains continue.

The spread between the bulls and bears remained in danger territory at 41.5%, up from 40.7% a week ago. The mid-Oct difference of 17.1% was near positive levels, down sharply from late Aug and early Sep when it peaked at 43.5%. Differences over 30% are a worry and above 40% signals major caution. The mid-Oct spread was a low since Sep-2013 when it was expanding from the favorable reading of 13.4% that Aug. Bears haven't outnumbered bulls (a negative spread) since October 2011. 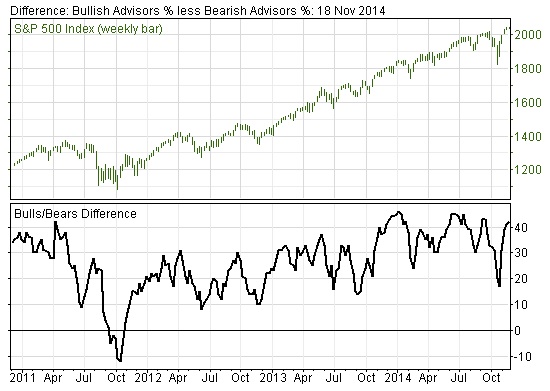 UPDATE – KWN has many more interviews being released today.

Richard Russell – What To Do When The Financial Hurricane Strikes 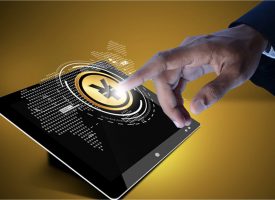