Even after the U.S. stock market staged a big rally, this may spell big trouble for the United States.

Recession Looming?
November 29 (King World News) – Here is a portion of an extremely important note from Jason Goepfert at SentimenTrader:  After hitting a multi-year low, jobless claims have hit a 6-month high and are above a 52-week average. That tends to lead to a rise in the unemployment rate, an input to many recession models. But a nascent uptrend in jobless claims has not consistently led to weakness in stocks for at least the next year.

We typically haven’t focused much on economic releases here. But we’ve discussed them more lately because there are fears that we’re late in an economic cycle, a recession may be on the horizon, and stocks tend to correct much deeper during them due to the damper effect on sentiment.

Currently, there are low odds that we’re in recession. A few economic reports have started to dispute that, like Thursday’s release on jobless claims, which are rising…

A Bottom In Jobless Claims
SentimenTrader continues:  Jobless claims tend to lead the unemployment rate, which is a core part of many recession models. This week, the BLS noted that jobless claims have risen to their highest level in six months, after recently being at a multi-year low. And claims have now been above their 52-week average for two weeks in a row, after going more than six months below. 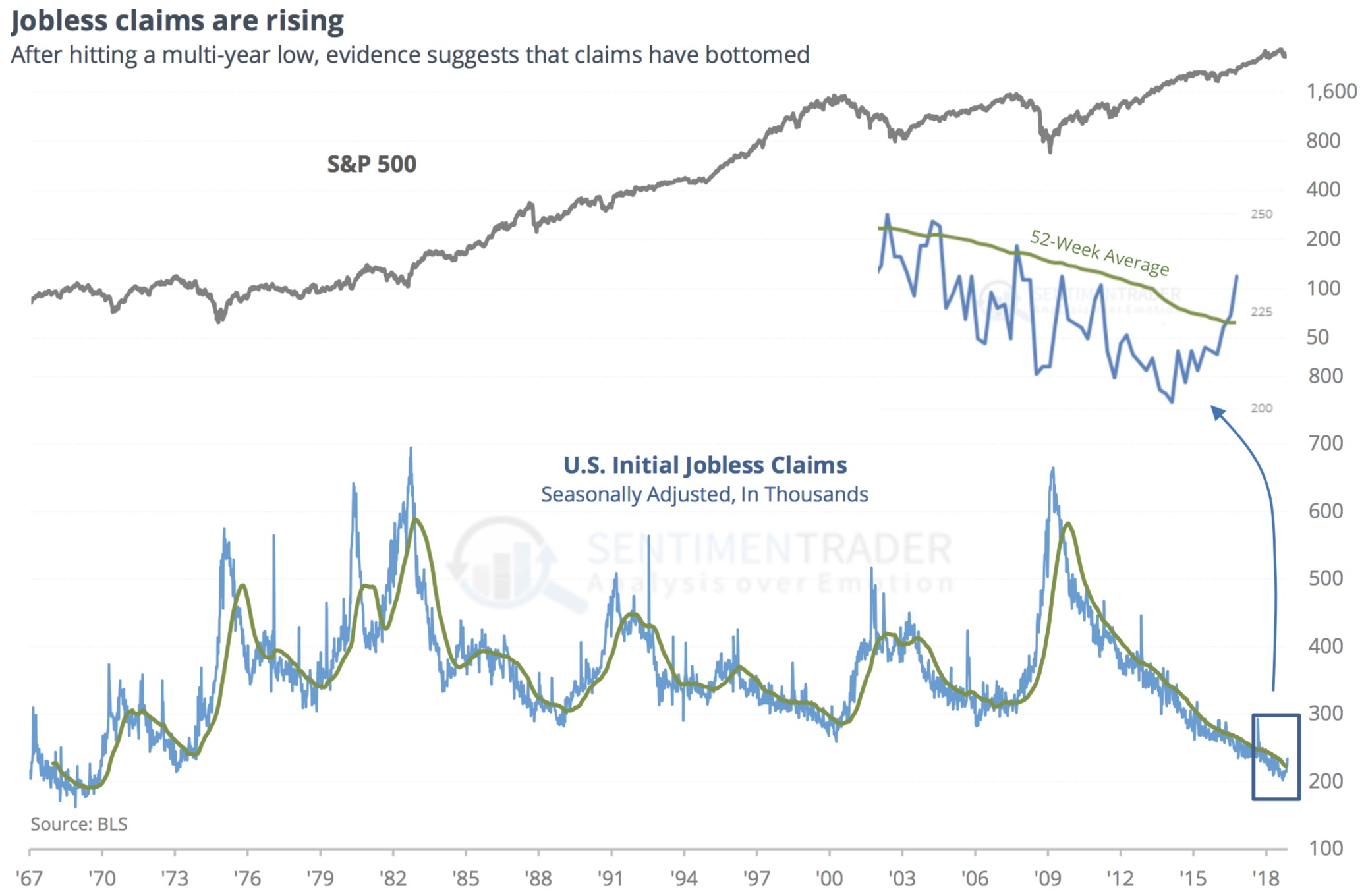 Other times jobless claims did this, stocks did okay going forward as we can see from the tables on the next page. Short-term returns were weak, but that’s probably coincidence more than anything.

Over the next 6-12 months, there was precious little evidence that rising claims exerted a negative influence on stocks. Even up to a year later, both tables (available only to subscribers) show average risk of less than 5% for the S&P, versus a double-digit average reward. If this jobless trend continues, it will almost certainly lead to recession, but the lead time is long from the time the trend initially changes.

This is why Jason Goepfert is the best in the world at what he does — providing actionable market data.  To subscribe or try a free two week trial to the internationally acclaimed work that Jason Goepfert produces at SentimenTrader CLICK HERE.

ALSO JUST RELEASED: Here Is The Big Problem As The Global Economy Rolls Over CLICK HERE TO READ.